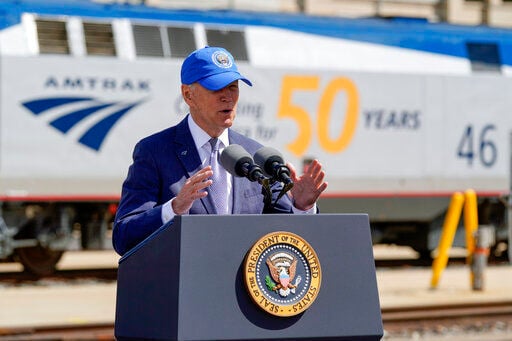 President Joe Biden speaks during an event to mark Amtrak’s 50th anniversary at 30th Street Station in Philadelphia on Friday. 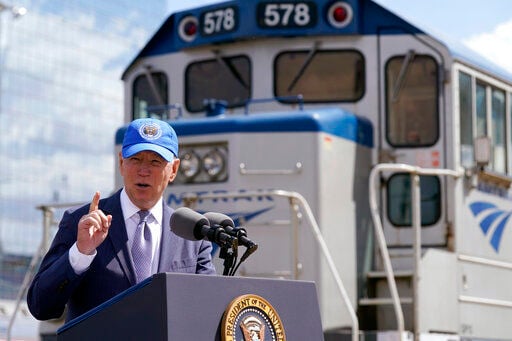 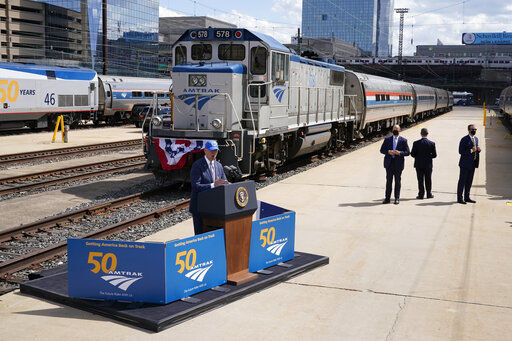 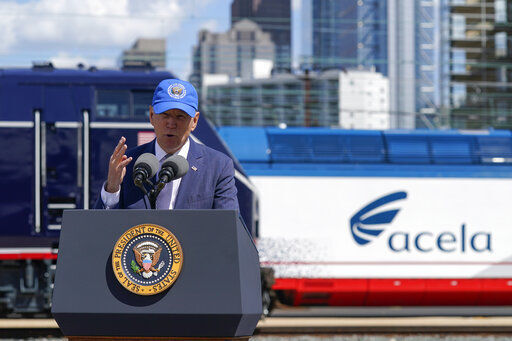 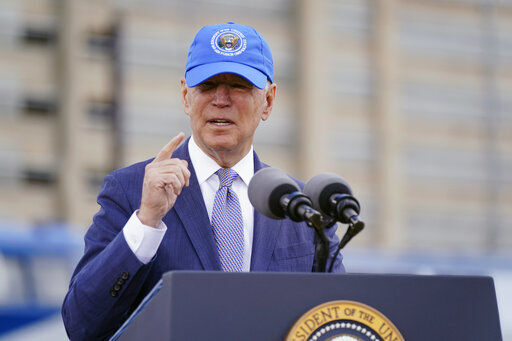 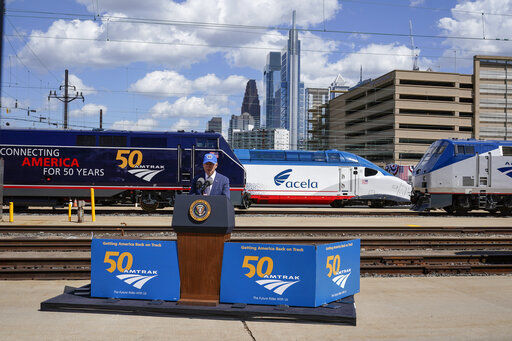 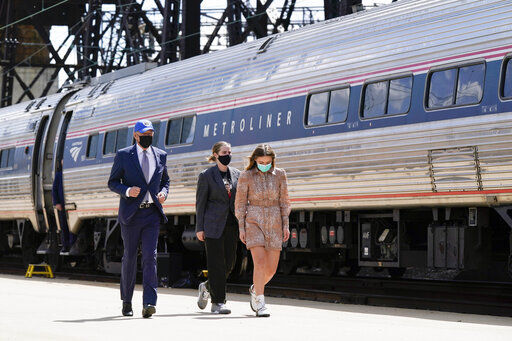 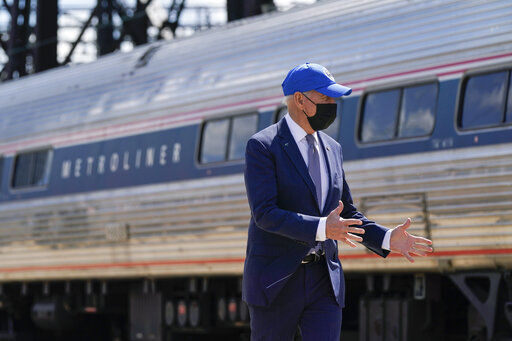 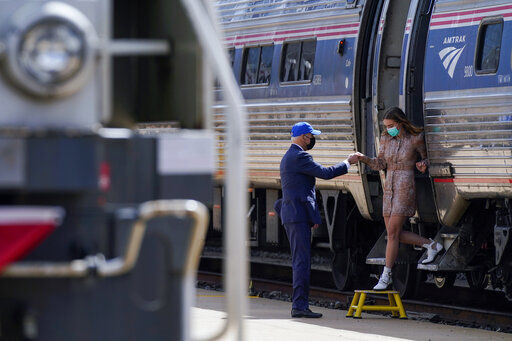 President Joe Biden offers his granddaugther Finnegan Biden a hand as she steps off a train car during an event to mark Amtrak's 50th anniversary at 30th Street Station in Philadelphia, Friday, April 30, 2021. (AP Photo/Patrick Semansky) 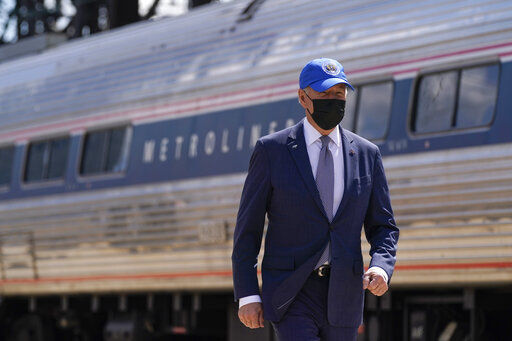 President Joe Biden speaks during an event to mark Amtrak’s 50th anniversary at 30th Street Station in Philadelphia on Friday.

President Joe Biden offers his granddaugther Finnegan Biden a hand as she steps off a train car during an event to mark Amtrak's 50th anniversary at 30th Street Station in Philadelphia, Friday, April 30, 2021. (AP Photo/Patrick Semansky)

As a U.S. senator, Biden was a fixture on Amtrak trains between his home in Wilmington, Del., and Washington, D.C., when the Senate was in session. He continued riding Amtrak as vice president. He has sometimes been referred to as “Amtrak Joe.”

But with a presidential train trip challenging because of security concerns, Biden instead flew to Philadelphia for Amtrak's celebration at its busy 30th Street Station. He was introduced by a conductor who worked the route when Biden was a regular passenger. The next generation of Amtrak's high-speed Acela train, scheduled to enter service next year, was on display.

"I wouldn’t have missed this for the world," said Biden, who recalled his years of racing to catch the 7:28 p.m. train to head home to Wilmington and, on a few occasions, falling asleep and missing his stop.

“He knew just about everybody that worked in the station and the conductors and other people and Amtrak folks who were on the train for those many, many years that he rode the rail,” said Amtrak CEO Bill Flynn.

Flynn described Biden as one of the rail service's “most loyal customers.” Biden held annual Christmas parties for Amtrak employees and attended funeral services for some of the workers he came to know over the years.

“He regularly engaged with them and knew quite a bit about them, and I think that's why he was anxious or willing to be part of our 50th anniversary,” Flynn said of the president.

Biden's appearance in Philadelphia, his third visit to Pennsylvania while in office, comes as he marks his first 100 days as president. It also follows his speech to Congress on Wednesday, when he outlined his $2.3 trillion jobs and infrastructure plan and previewed some $1.8 trillion in proposed spending on education, child care and other family needs.

The Amtrak party was Biden's latest stop in a post-speech tour to sell the infrastructure, jobs and families plans. He campaigned in Atlanta on Thursday and plans a stop in Yorktown, Va., on Monday.

The infrastructure proposal would devote $621 billion to improving roads, bridges, public transit and other transportation infrastructure. Of that, $80 billion would go toward tackling Amtrak’s repair backlog, improving service along the Northeast Corridor and expanding service across the U.S. Biden has said Amtrak's Northeast Corridor is a critical part of the U.S. economy.

Amtrak said after Biden announced the plan that the corporation would upgrade and expand service, including by adding 30 new routes and adding trains on 20 existing routes across the U.S. by 2035. New service would begin in portions of northeast Pennsylvania including Scranton, where Biden was born, as well as Nashville, Tenn.; Columbus, Ohio; Phoenix; Las Vegas; Houston; Dallas; and Austin, Texas, if approved by Congress.

But while the $80 billion represents a significant investment, the money would not go far in terms of funding high-speed rail. Amtrak has estimated that it has a $31 billion repair backlog for its trains in the Northeast Corridor alone, and transportation analysts say adding new lines in that region could easily use up the funds that remain.

Biden also noted that the U.S. badly trails China, which has 23,000 miles of high speed rail, in modernizing railways. Biden, in pitching his call for the massive infrastructure investment, has repeatedly said the plan is necessary, in part, to keep up with Beijing as an economic competitor.

"We’re way behind the rest of the world now," Biden said.

A Senate Republican counteroffer to Biden’s plan, totaling $568 billion, would devote a much slimmer $20 billion to U.S. rail service.

Ridership is returning to pre-COVID-19 levels, including reservations for summer travel, Flynn said. He attributed the rebound to the availability of vaccines and people's desire to travel.

Biden's first wife and baby daughter were killed in a car accident in Delaware, weeks after he was elected to the Senate. His young sons Beau and Hunter were seriously injured.

Biden considered not taking his Senate seat, but ultimately took office. He then decided to return home every night from Washington to be with his sons — and Amtrak was the vehicle. He made the round trip every day the Senate was in session, for the 36 years he held the seat.

He also rode the train when he was President Barack Obama's vice president. After he and Obama were elected, they rode an Amtrak train together into Washington for the inauguration.

Biden also rode Amtrak during the 2020 campaign. He had wanted to recreate the 2009 train ride for his own inauguration in January, but those plans were shelved after the insurrection at the Capitol by supporters of President Donald Trump.

When he returned to Delaware after the Obama administration ended, Biden estimated to CNN that he had taken more than 8,200 round trips and had traveled more than 2 million miles on Amtrak.

Amtrak renamed its Wilmington, Del., train station after Biden in 2011.

“I’ve come to see that Amtrak doesn't just carry us from one place to another,” Biden said. “It opens up enormous possibilities, and especially now, it makes it possible to build an economy of the future and one that we need.”