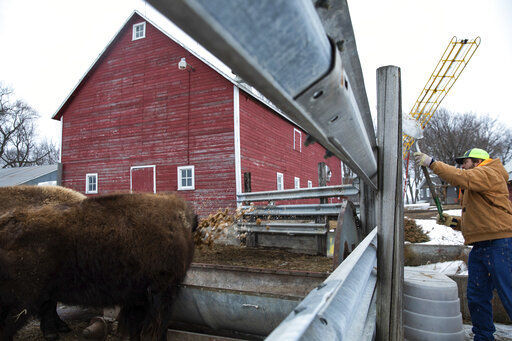 Farmer Craig Fischer throws spent brewing grain into the feed trough for his bison on Feb. 26 at his farm in Sleepy Eye, Minn. Sleepy Eye Brewing Co. and the farm have a partnership in which they trade bison feed for bison meat to cook in their cafe. 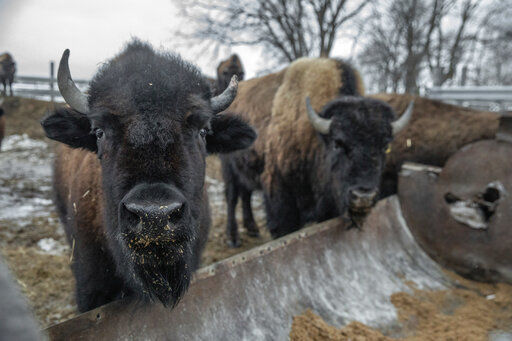 Farmer Craig Fischer throws spent brewing grain into the feed trough for his bison on Feb. 26 at his farm in Sleepy Eye, Minn. Sleepy Eye Brewing Co. and the farm have a partnership in which they trade bison feed for bison meat to cook in their cafe.

SLEEPY EYE, Minn. — As brewers siphoned a new batch of beer into kegs at the new Sleepy Eye Brewing and Coffee Co., Craig Fischer waited patiently off to the side. He’s there every week when they fill the kegs.

But the liquid gold wasn’t what he wanted to bring home.

He wanted what was left over.

Several plastic barrels lined a wall near the back of the brewery. Under the lids were mounds of golden grain that had already been sucked dry of sugars and other elements that make beer what it is.

It’s called spent grain — and it was exactly the gold that Fischer was after.

Craft brewers consider this byproduct of their work to be waste — but Fischer is a bison farmer. And to his herd, it’s a tasty and nutritious snack, a good source of protein, fiber and energy.

So, every time head brewer Arron Luebbert starts brewing a batch of beer at the brewery in downtown Sleepy Eye — which usually happens about twice a week — he calls Fischer to let him know when the beer mash will be ready for pickup.

“Depending on the grain, he’s getting anywhere from a couple of pounds all the way up to our biggest batch, which was just shy of 300 pounds,” Luebbert told Minnesota Public Radio News. “We’ll take the mash, dig the mash right out of that big door. It’ll spill out there, and we will fill up a couple of barrels and (we) haul it outside.”

Eventually, that mash comes full circle: The meat from Fischer’s bison herd, sustained in part by the spent grain from Luebbert’s beer, shows up on the menu of the brewery’s coffee shop cafe, in the form of bison chili, bison sandwiches and the occasional Italian wedding soup meatballs.

The Sleepy Eye Coffee Co. opened in the city’s historic Pix Theater in October, after nearly three years of renovations. The brewery and tap room followed in December. The old cinema shuttered in the early 1990s, and was left largely vacant since then. Now, it’s a hybrid brewery and coffee shop, with a lunchtime cafe most days of the week.

“At night, when you’d drive through downtown in the past, before this was open, Sleepy Eye was kind of dead downtown,” Luebbert said. “There was hardly any business, no cars parked along Main Street. Now, when you come by at night, cars are lined up and down the street. It’s really cool to see that come back to Sleepy Eye.”

Five friends came together to open the brewery-cafe-coffee shop as an evolution of the craft brewing they had been doing in their garages — and as a way to help revive Sleepy Eye’s downtown.

Part of that meant they would work with other local businesses, so they’ve made a point to source as many of their ingredients as possible from around the area. The milk for the lattes is from the grocery store down the street. The eggs for the breakfast sandwiches come from a poultry farm 20 minutes away. And the meat for the popular bison chili comes from Craig Fischer’s Sleepy Bison Acres.

“Being able to involve so many different people from the community is just really important to us,” said David Forster, who co-manages the coffee shop side of the business with his wife, Samarah.

“And, we hope that that energy kind of snowballs and continues.”

It’s efficient, too — for the brewery and the bison farm.

By taking the spent grain off their hands, Fischer is able to help the brewers at Sleepy Eye Brewing and Coffee Co. eliminate the costs and logistics of getting rid of their waste product. And he hopes the additional grains will enhance the flavor of his bison meat.

At the cafe and coffee shop, Samarah Forster is highlighting those partnerships with a little education. She’s also the head chef, and designed the menu.

She said she wants customers to understand where their food comes from — and that, often, it’s not too far away.

After picking up the barrels of grain, Fischer took the back roads out of Sleepy Eye under the darkening blanket of dusk. The headlights of his truck were the only ones for miles in the expanse of the countryside. Just off state Highway 4, he rolled onto his property in Albin Township, Minn.

A small huddle of Fischer’s 30 bison clustered quietly inside a fence. The sun sank low into the sky, melting into the cold colors of wintry blues and white.

Fischer backed his truck in front of the bison pen, and dashed into the house to grab his “bison hat” — a fluorescent green baseball cap with a black silhouette of a bison, Sleepy Bison Acres’ new logo design — before turning his attention to the bins of spent grain in the truck bed.

He carefully hauled out the bins, tipped them over and tossed piles of golden grain into his bison’s feeding pen by the shovelful.

The clunk of grain against metal was like a magnet, drawing curious bison toward the feeding troughs. They nuzzled their snouts into the grain, the hairy mass all satisfied snorts and grinding teeth.

“You want to try for consistency,” Fischer said. “It’s very important for us to have a diverse nutritional diet for our bison, and this was a no-brainer.”

Every once in a while as he talked, smaller bison would sneak in for a taste at the trough, quickly enough to avoid the attention of the bigger bulls, who would get defensive over their stake of the bounty.

What they were eating was the product of brewing, but there’s no alcohol in Luebbert’s spent grain — malted barley is steeped in hot water, and all the sugars, which help create the alcohol, are extracted to make the beer — so the bison don’t get sleepy.

Some of Fischer’s bison have taken to the beer mash, he said, though some aren’t too fond of it.

“This is just like our kids; you have some adventurous ones and you have some that just won’t touch it right away until they figure out what it is,” Fischer said. “It takes a little bit for them to adjust to a new food just like it would you or me. They seem to have taken a liking to it. It’s like they’re cleaning off their plate.”

Fischer has only been feeding his bison the beer mash since the brewery opened in December, so it’s still too early to tell currently how it will affect the overall flavor profile of their meat.

Otherwise, Fischer feeds his bison hay, and lets them forage wild pasture grass. He prefers to let his animals roam. Bison are by nature wild animals, he said, and they tend to care for themselves. He just wants them to be happy.

“They naturally do well,” Fischer said. “I’m just a land manager. I am somebody that is providing a safe environment for my animals to do their thing.”

A few years into his operation — he began raising bison after he and his wife, Elizabeth, were gifted one on their wedding day — Fischer’s meat is now making its way into several restaurants in the region. Bison meat is naturally lower in fat than beef, and has low cholesterol with higher protein — and it’s beginning to find its own niche.

Diners now eat Fischer’s bison meat in New Ulm, Rochester, St. Peter and Granite Falls. In his partnership with the brewery and coffee shop in Sleepy Eye, Fischer sees the opportunity to show diners where the process of creating food starts — and where it ends.

“The investment is all local,” he said. “It’s zero-waste, and it’s hard to overstate that. I’m just proud of that concept — that we’re ... bringing more value back to the community, which is so important in a small town.”

For copyright information, check with the distributor of this item, Minnesota Public Radio News.