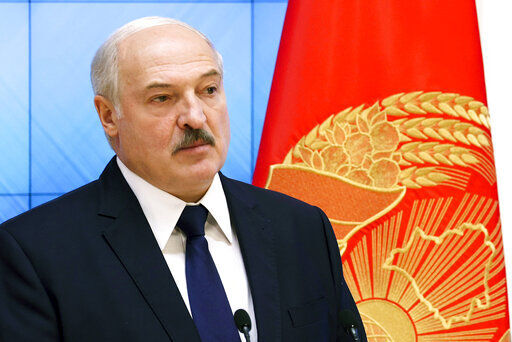 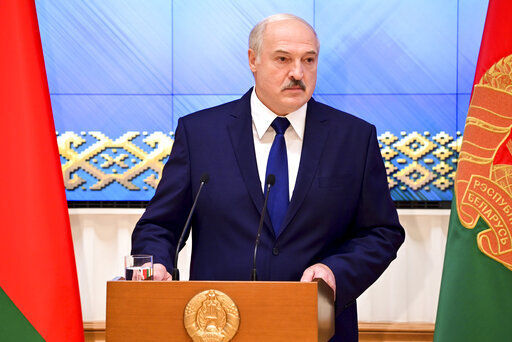 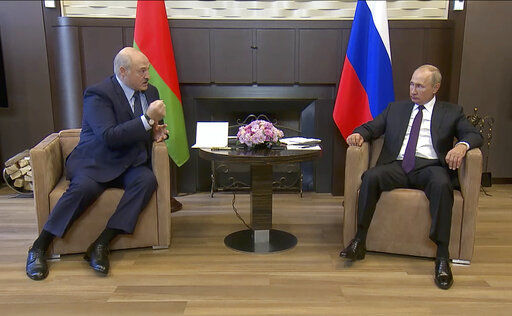 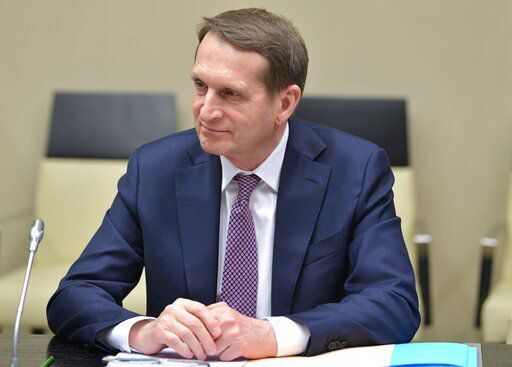 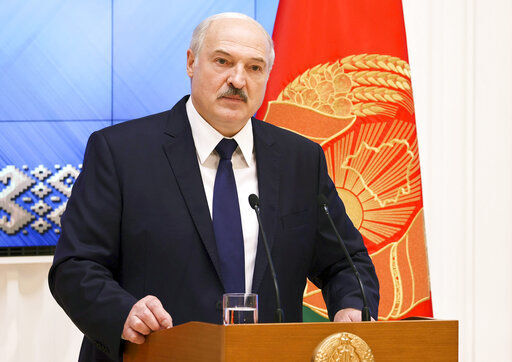 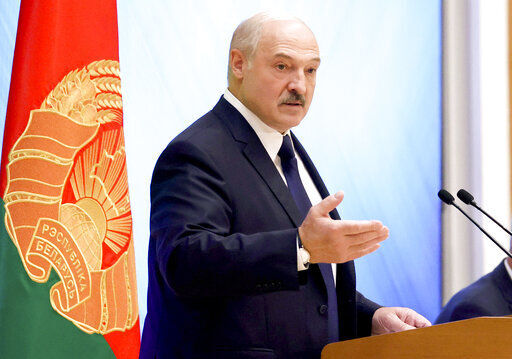 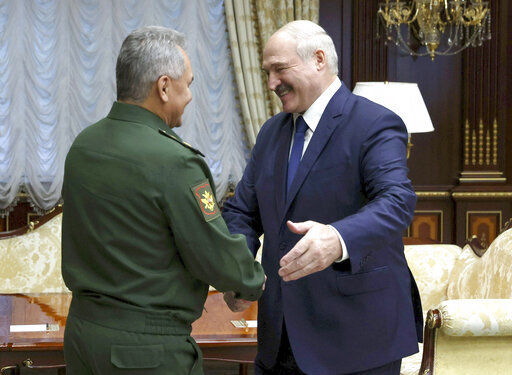 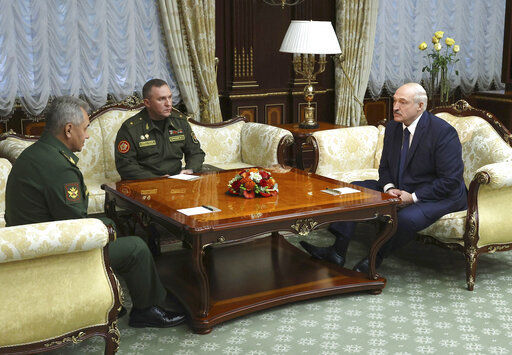 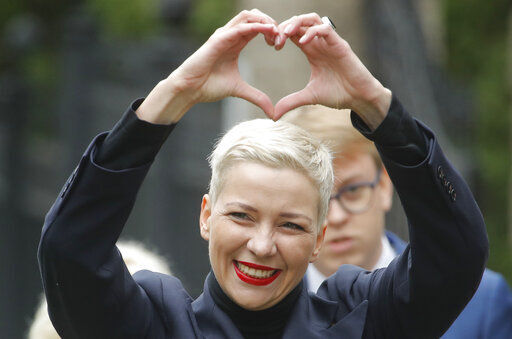 FILE - In this Aug. 27, 2020, file photo, Maria Kolesnikova, one of Belarus' opposition leaders, gestures on the way to the Belarusian Investigative Committee in Minsk, Belarus. Kolesnikova, a professional flute player with no political experience, emerged as a key opposition activist in Belarus. She has appeared at protests of authoritarian President Alexander Lukashenko after he was kept in power by an Aug. 9 election that his critics say was rigged. (AP Photo/Dmitri Lovetsky, File) 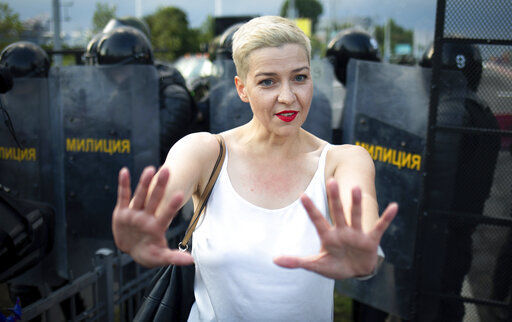 FILE - In this Aug. 30, 2020, file photo, Maria Kolesnikova, one of Belarus' opposition leaders, gestures during a rally in Minsk, Belarus. Kolesnikova, a professional flute player with no political experience, emerged as a key opposition activist in Belarus. She has appeared at protests of authoritarian President Alexander Lukashenko after he was kept in power by an Aug. 9 election that his critics say was rigged. (Tut.By via AP, File)

FILE - In this Aug. 27, 2020, file photo, Maria Kolesnikova, one of Belarus' opposition leaders, gestures on the way to the Belarusian Investigative Committee in Minsk, Belarus. Kolesnikova, a professional flute player with no political experience, emerged as a key opposition activist in Belarus. She has appeared at protests of authoritarian President Alexander Lukashenko after he was kept in power by an Aug. 9 election that his critics say was rigged. (AP Photo/Dmitri Lovetsky, File)

FILE - In this Aug. 30, 2020, file photo, Maria Kolesnikova, one of Belarus' opposition leaders, gestures during a rally in Minsk, Belarus. Kolesnikova, a professional flute player with no political experience, emerged as a key opposition activist in Belarus. She has appeared at protests of authoritarian President Alexander Lukashenko after he was kept in power by an Aug. 9 election that his critics say was rigged. (Tut.By via AP, File)

MOSCOW — Belarus’ authoritarian leader on Wednesday sought to disparage protesters demanding his resignation for a sixth straight week following a disputed election by accusing the United States of fomenting the unrest.

In a long speech to top officials, Belarusian President Alexander Lukashenko ranted against the alleged U.S.-led plan to destabilize the country and claimed that American allies in Europe have participated in the effort that took years to prepare, part of his attempts to cast the opposition as Western stooges.

Lukashenko didn’t provide evidence to back his claim that the U.S. had any involvement in the demonstrations.

His main challenger in the election, Sviatlana Tsikhanouskaya, dismissed his comments as an attempt to divert public attention from rigging the vote and the violent crackdown on protests.

“There is just one reason behind the protests in Belarus and it’s known to everyone: Lukashenko has lost the vote, but he doesn’t want to step down,” Tsikhanouskaya told The Associated Press in a written comment. “People have denied Lukashenko their trust and support and demand that he leave.”

Protesters in Belarus have flooded the streets of the Belarusian capital and other cities denouncing Lukashenko’s landslide reelection in the Aug. 9 vote as rigged. The huge demonstrations were driven by frustration with the Belarusian strongman’s 26-year iron-fist rule, his cavalier response to the coronavirus and the worsening economy.

The U.S. and the European Union have criticized the election as neither free nor fair, and urged Lukashenko to start talks with the opposition — a call he has rejected.

“We had the vote and got the result, period,” Lukashenko said in Wednesday’s speech before top officials. “It’s time to stop stirring up society.”

U.N. Secretary-General Antonio Guterres told reporters Wednesday he hopes his repeated calls will be heeded for an inclusive political dialogue among Belarusians. He said re-establishing a national consensus “is absolutely essential for the harmonious development of the country.”

Sergei Naryshkin, director of Russia’s Foreign Intelligence Service, claimed in a statement carried by Russian news agencies Wednesday that the U.S. has funded the Belarusian opposition and encouraged the protests.

In an apparent attempt to delegitimize the Belarusian protests, Naryshkin added that his agency has information that “the U.S. is playing a key role in the current developments in Belarus.” He alleged that the U.S. has earmarked tens of millions of dollars to finance Belarus’ opposition groups, but provided no evidence.

The U.S. Embassy in Minsk had no immediate comment.

Tsikhanouskaya, the main opposition challenger who left for Lithuania a day after the vote under official pressure, rejected Naryshkin’s statement.

“It’s an internal political crisis, and the protesters’ demands contain nothing regarding relations with other countries or a shift in Belarus’ foreign policy course,” she said in written remarks to the AP. “Mr. Naryshkin should better understand that instead of airing dated propaganda cliches.”

In Wednesday’s speech, Lukashenko charged that the Czech Republic, Poland, Lithuania and Ukraine have helped fuel protests. All those countries have denied similar claims by Lukashenko in the past.

“The Belarusian 2020 scenario is a combination of the most effective ‘color’ destabilization technologies that have been tested in various countries,” he said in a reference to the color-coded protests that have ousted unpopular rulers in other ex-Soviet nations. “They obviously count on the scale and duration of protests to wear us down and exhaust our resources. We aren’t relaxing and stand ready to respond to any challenge.”

After a fierce crackdown on protests in the first days after the vote in which nearly 7,000 were detained and hundreds were brutally beaten by police, Belarusian authorities changed tactics and tried to stifle dissent with selective detentions of demonstrators and jailing of opposition leaders.

Belarusian prosecutors have launched a probe against the opposition activists who created the Coordination Council to push for a new election, jailing some of its top members and forcing a few others to move abroad.

Maria Kolesnikova, a leading council member who has been in jail for more than a week after she ripped her passport to avoid the forcible expulsion to Ukraine, was charged Wednesday with making calls for the seizure of power and forcible change of the constitutional order. She could face up to five years in prison if convicted.

Kolesnikova was suffering from allergy in prison but remains in good spirits, said her lawyer Lyudmila Kazak.

“She wants to tell people that never regretted acting as she did even for a second,” the lawyer said.

German Foreign Minister Heiko Maas, whose country holds the European Union’s rotating presidency, noted that and his colleagues from other EU countries will meet Monday to consider how to proceed with sanctions.

“I will say openly that if the violence against the peaceful opposition doesn’t stop, then these measures will have to be extended to significantly more people, and then we will have to talk about Mr. Lukashenko,” Maas told the German parliament on Wednesday.

Western pressure has pushed Lukashenko to further cement ties with Russia, his main sponsor and ally. The neighboring countries have a union agreement and maintain strong political, economic and military ties.

Russian President Vladimir Putin announced a new $1.5 billion loan to Belarus when he hosted Lukashenko on Monday — a financial lifeline condemned by the Belarusian opposition, which warned Moscow that it would tarnish future ties between the countries.

In a bid to rally Moscow’s support, Lukashenko has cast the protests as part of a Western plot to isolate Russia. Earlier this week, Russian paratroopers deployed to Belarus for the drills that will run through Sept. 25 near Brest, on the border with Poland.

At a meeting with Russian Defense Minister Sergei Shoigu who visited Belarus Wednesday for talks on deepening military cooperation, Lukashenko said he hopes to get more Russian weapons and suggested planning more maneuvers in the future.

The German foreign minister noted that Russia “carries a very special responsibility” given its close ties with Belarus and warned that “with its unconditional support for Lukashenko so far and hybrid exertion of influence, Moscow will certainly lose the sympathy of people in Belarus.”

Maas also sought to allay the Kremlin fears of Belarus falling into the Western orbit.

“For us inside the European Union as well, this is not about detaching Belarus from Russia and incorporating it in the European Union,” he said. “This is simply about us standing up for people in Belarus being able to decide themselves what road they take in a free and fair election.”

Follow all AP stories about the turmoil in Belarus at https://apnews.com/Belarus