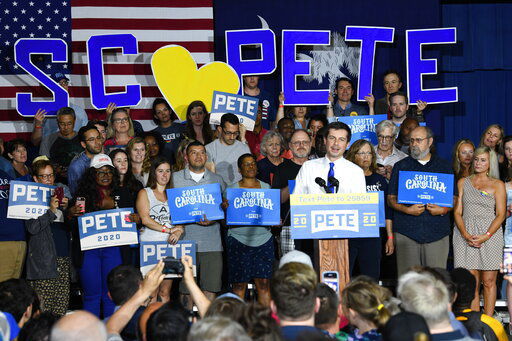 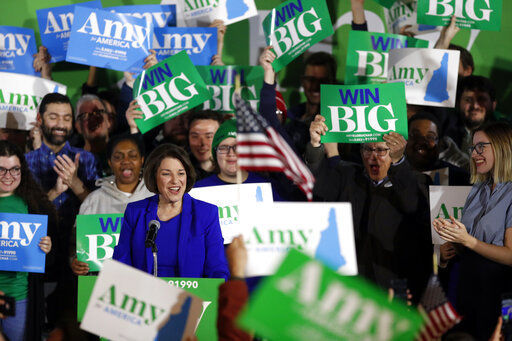 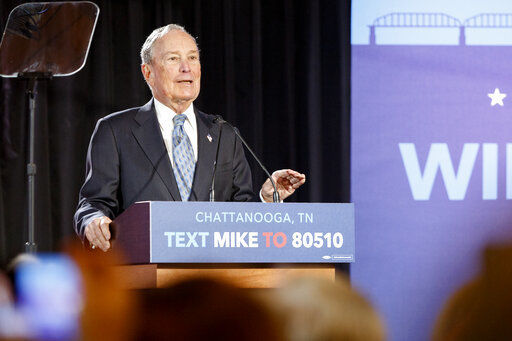 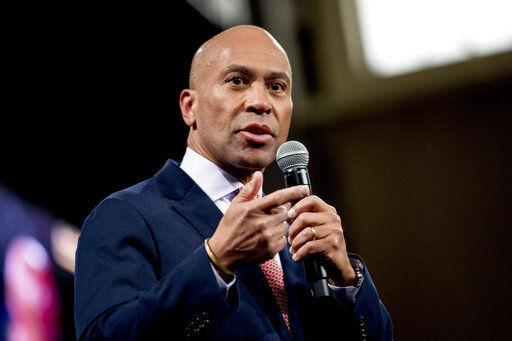 FILE - In this Feb. 8, 2020 file photo, Democratic presidential candidate former Massachusetts Gov. Deval Patrick speaks at "Our Rights, Our Courts" forum New Hampshire Technical Institute's Concord Community College, in Concord, N.H. Patrick has ended his campaign for president after his late bid failed to gain traction in the race. Patrick was the last remaining African American candidate in a Democratic presidential field once defined by its diversity.(AP Photo/Andrew Harnik)

FILE - In this Feb. 8, 2020 file photo, Democratic presidential candidate former Massachusetts Gov. Deval Patrick speaks at "Our Rights, Our Courts" forum New Hampshire Technical Institute's Concord Community College, in Concord, N.H. Patrick has ended his campaign for president after his late bid failed to gain traction in the race. Patrick was the last remaining African American candidate in a Democratic presidential field once defined by its diversity.(AP Photo/Andrew Harnik)

WASHINGTON — Democratic presidential candidates plotted their paths Wednesday into state primaries now expanding to include more voters of color, while the party’s establishment braced for a long and increasingly uncertain nomination fight ahead.

Sen. Bernie Sanders’ win in the New Hampshire primary set off a new round of strategizing among moderate party stalwarts searching for a way to knock the Vermont independent off course. Former Vice President Joe Biden made a personal appeal to donors nervous about his dismal showing in the first two contests, while Sen. Amy Klobuchar hustled to take advantage of a burst of momentum and money. Pete Buttigieg, second to Sanders in New Hampshire and slightly leading in delegates, made a pitch to pull critical union members away from the progressive senator.

“This is far from over, and this is going to be a pretty extended process,” said Jim Margolis, who advised California Sen. Kamala Harris’ defunct campaign.

The race rolls ahead to Nevada, which holds a caucus on Feb. 22, and South Carolina, whose primary is a week later. That lineup sets up an immediate fight over the voters largely left out of contests in Iowa and New Hampshire, namely Latino, black and union voters.

That put immediate pressure on leading candidates to show they could compete outside of the largely white states that launched the nominating procession.

“If the choice is between Sen. Sanders telling them they’re going to have to give that up and me saying that we can enhance and increase choice without asking them to sacrifice what they have worked so hard for, I think that is a very good debate for us to have and I’m looking forward to having that debate,” Buttigieg said on NBC’s “Morning Joe.”

Klobuchar’s campaign worked to keep a tailwind from Tuesday’s strong third-place finish. A campaign that once was down to boasting of being in the “top five” vacuumed up donations — more than $6 million in recent days — and scrambled to build out the field operations and advertising needed to put the cash to use. Klobuchar’s campaign launched two new television and digital ads in Nevada on Wednesday. She was headed to Las Vegas after a fundraiser in New York.

The Minnesota senator appeared to benefit from Biden’s slide, scooping up new support from older and moderate voters. Biden’s campaign on Wednesday tried to reassure donors it could stop the bleeding with a retooled media strategy. On a conference call with donors, Biden and advisers said he would be increasing his visibility with more media interviews and would increase spending on radio ads, according to a participant on the call.

His campaign has raised just $4 million since his lackluster performance during the Iowa caucuses, the campaign told the group, describing the disappointing finishes there and in New Hampshire as a gut check for a candidate once viewed as the clear front-runner. They offered assurances that Biden’s base of support with black voters was still solid, and said it remained the key to reviving his bid once they start voting in large numbers in Nevada’s Feb. 22 caucus and South Carolina’s primary.

On a call with reporters, Louisiana Rep. Cedric Richmond, a Biden backer, argued no other candidate has Biden’s advantage in those states.

“You cannot come through diverse states without having diverse support,” he said.

Indeed, if the result from the first two states to vote — Iowa and New Hampshire — demonstrated anything, it’s that no candidate has a clear hold on the coalition needed to win the nomination. Both Buttigieg and Klobuchar, national newcomers from the Midwest, have demonstrated little backing from minority voters. Sen. Elizabeth Warren has also struggled to expand her support in the early contests or pick up momentum that might win over black votes in South Carolina, where African American voters make up more than half the Democratic electorate.

Warren’s fourth-place New Hampshire finish and its potential to deflate donors only made that outreach harder. The Massachusetts senator pulled advertising from South Carolina, according to the ad tracking firm Ad Analytics. Her campaign said it was shifting money to radio and print buys in the state, as well as TV air space in Nevada and Maine, the latter of which votes on March 3, Super Tuesday, along with a slate of Southern states, California and Texas.

Warren’s intention is to stay in the race through Super Tuesday, when her home state of Massachusetts votes, according to people who have spoken with her campaign. However, there’s a recognition that she needs a breakout moment to shift the current dynamics — no small task for a candidate whose approach to the race has been methodical and disciplined, not rooted in splashy made-for-television moments.

Her style seemed to cost her in the lead-up to New Hampshire. She took a cautious approach to Friday’s pre-primary debate, passing up opportunities to draw contrasts with other candidates and ultimately talking four minutes less than Sanders, her chief progressive rival. Klobuchar, meanwhile, was assertive and nimble, delivering a standout performance that catapulted her to her third-place finish.

Going forward, Warren’s team is grappling with how much to engage with her rivals. She’s been reluctant to draw contrasts herself, often telling reporters that she isn’t inclined to talk about other Democrats. But her campaign manager Roger Lau signaled that the campaign might take a sharper approach in coming days, issuing a memo ahead of the New Hampshire results that ticked through the weaknesses in the other candidates.

The race only gets more competitive and more expensive for Super Tuesday. Former New York Mayor Mike Bloomberg has been campaigning in those delegate-rich states for weeks, opting to skip the early scramble. His effort, and his millions in cash, appear to be making inroads with voters, including the black voters Biden is banking on.

On Wednesday, Bloomberg drew an overflow crowd to a speech at an African American museum in Chattanooga, Tennessee, one of the Super Tuesday states. None of his major competitors has yet announced stops there.

Former Massachusetts Gov. Deval Patrick ended his 2020 campaign Wednesday after his late bid failed to catch fire or resonate with voters. He was the last remaining African American candidate in a Democratic presidential field once defined by its diversity.