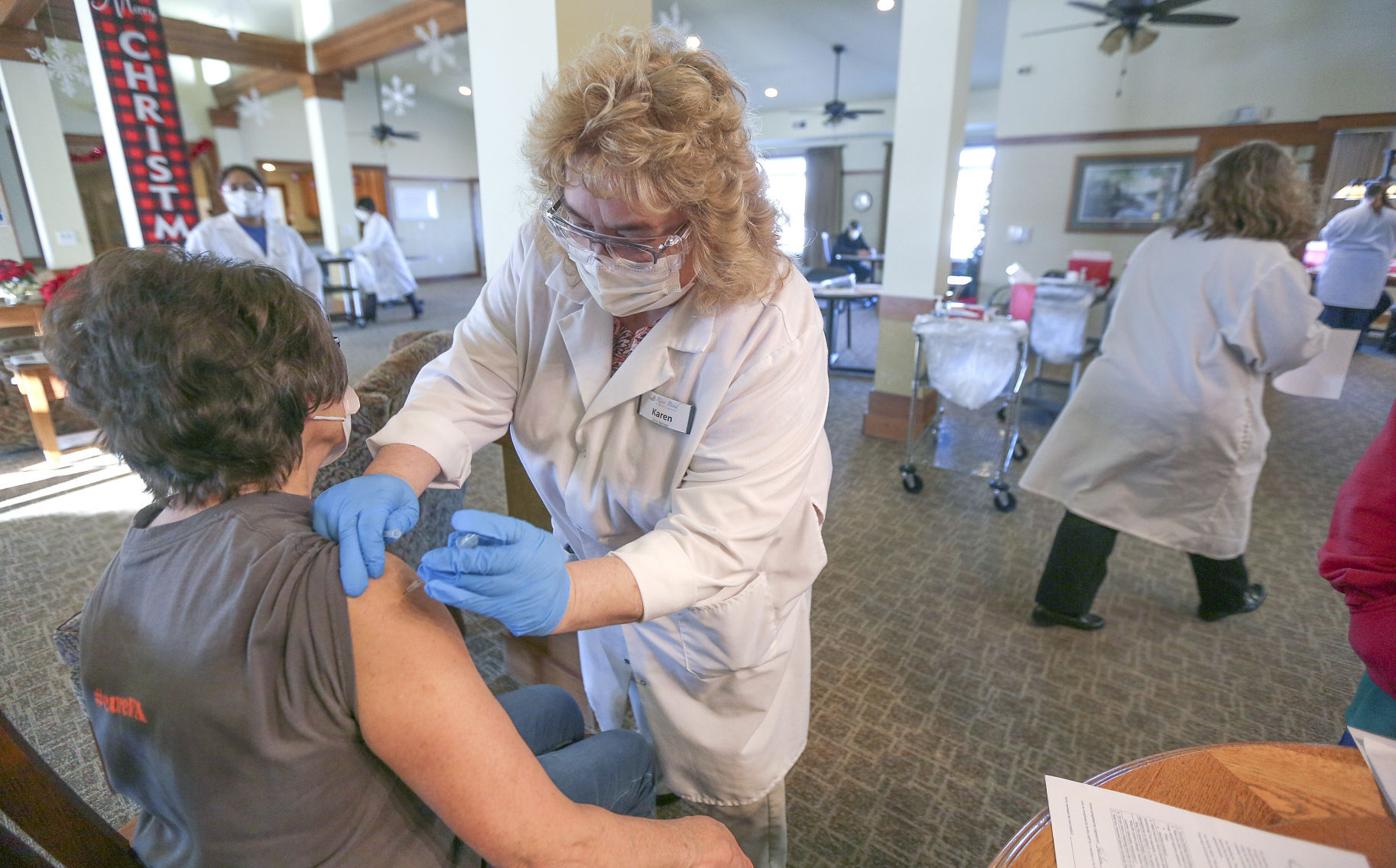 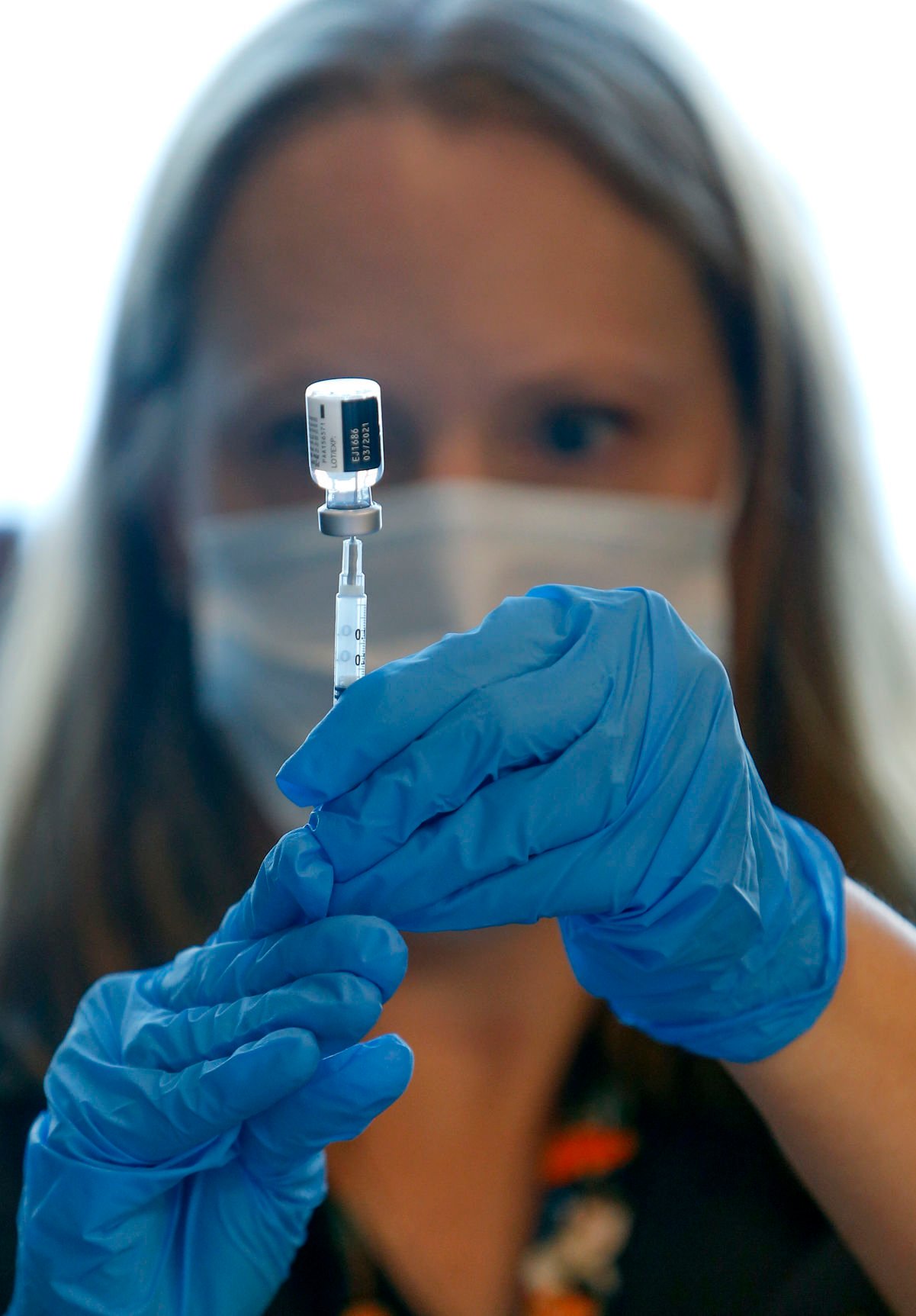 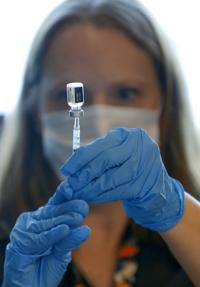 Kim Lee, a pharmacist with Community Pharmacy in Davenport, Iowa, prepares a dose of the COVID-19 vaccine. 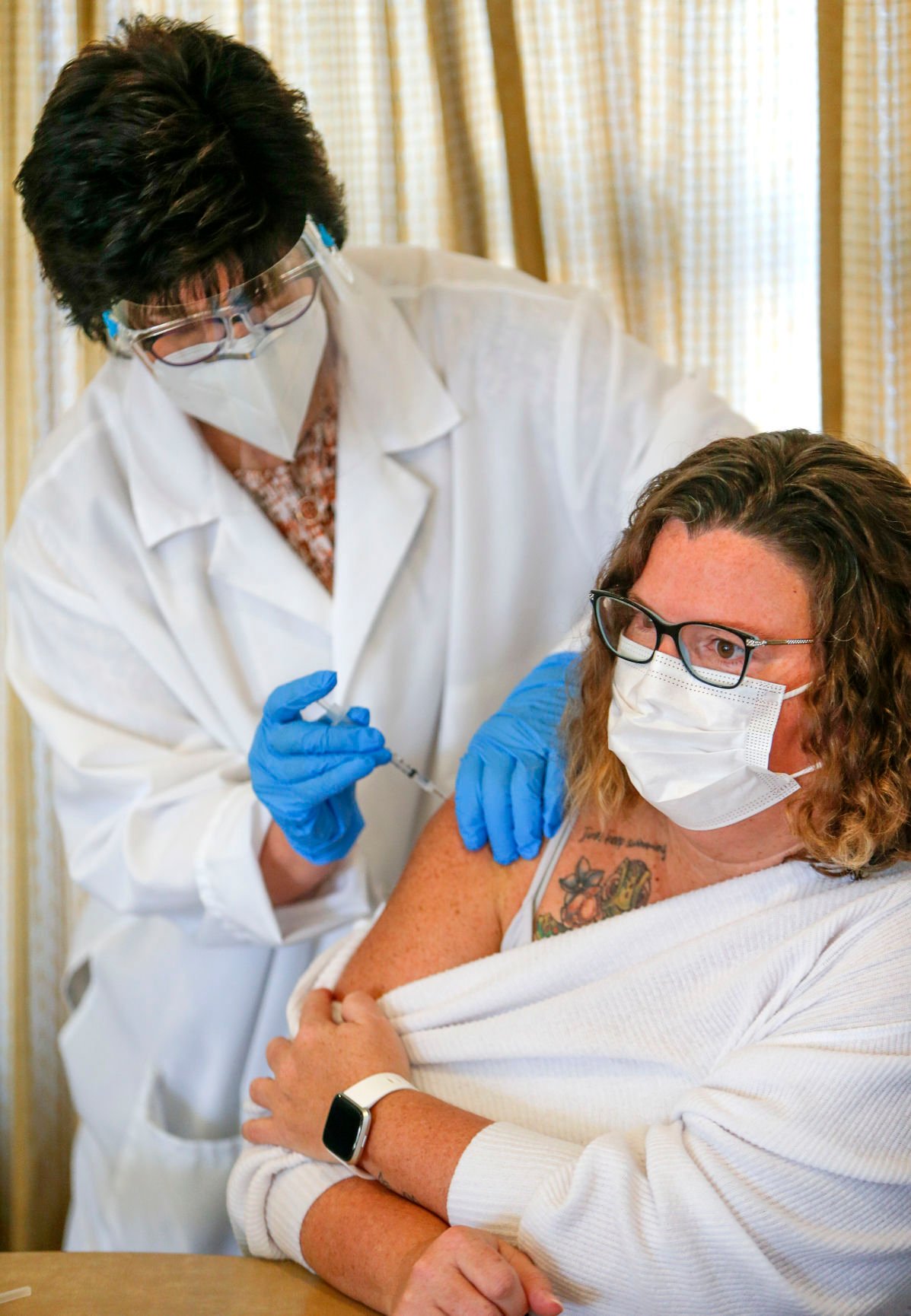 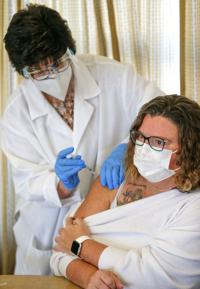 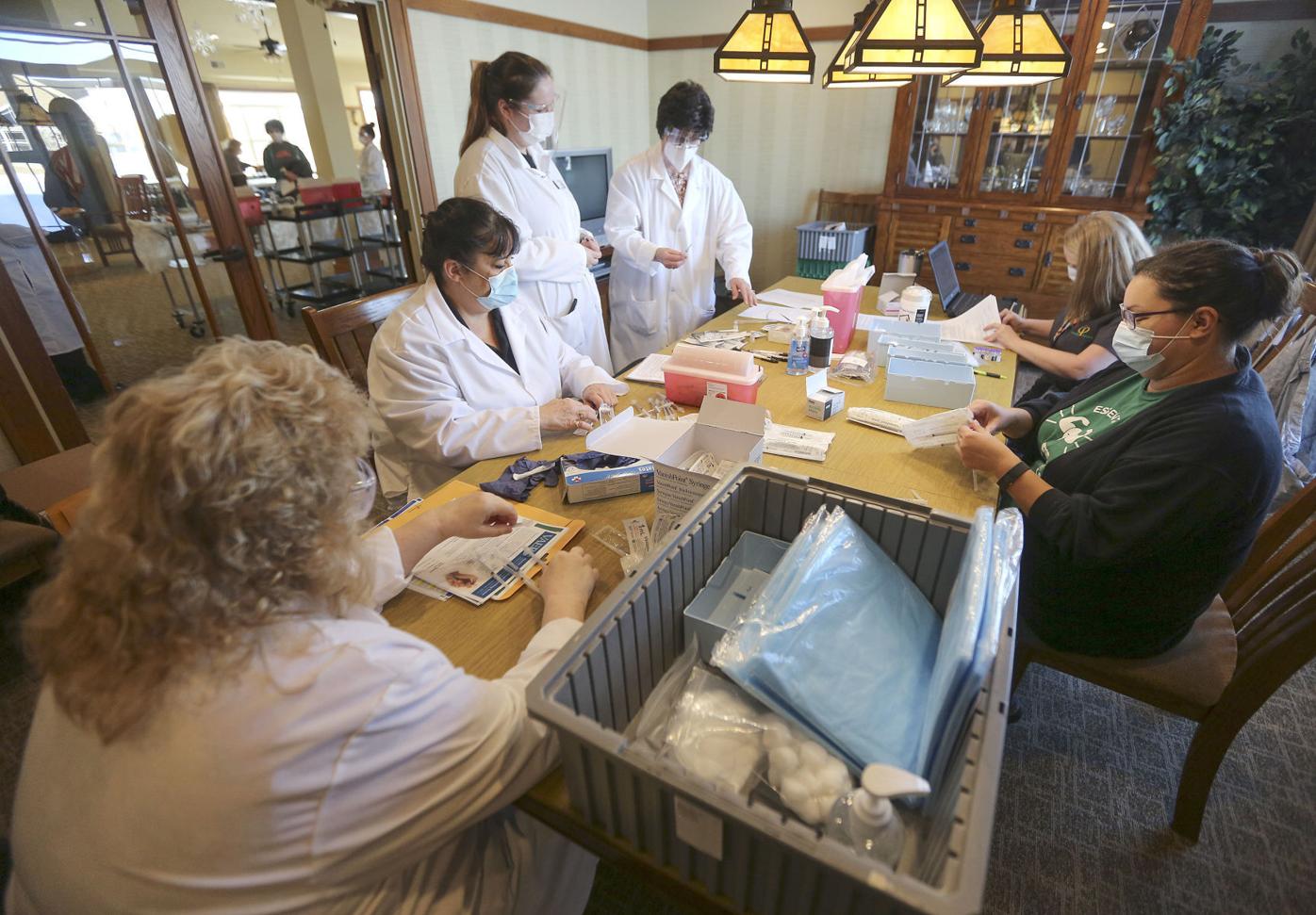 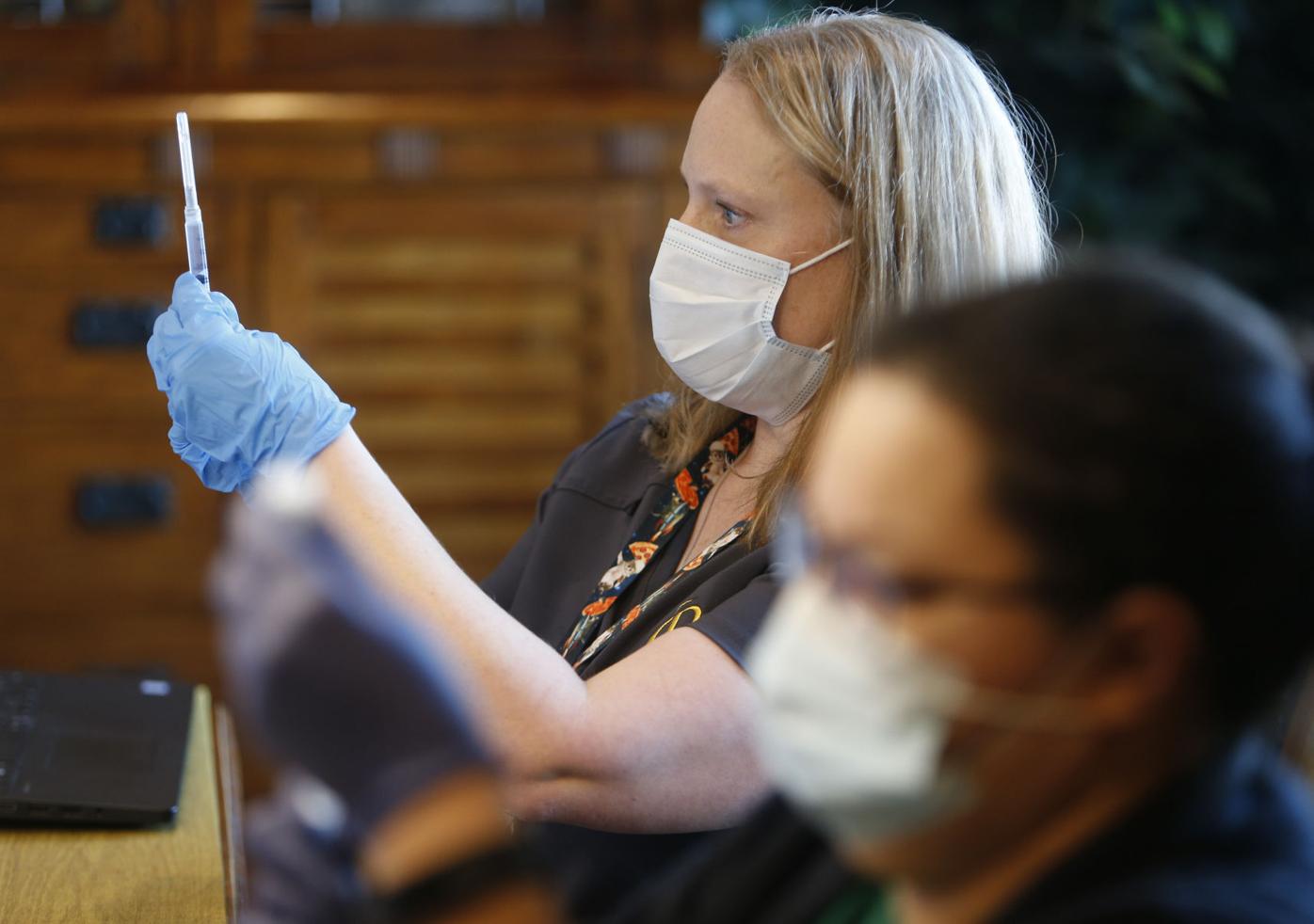 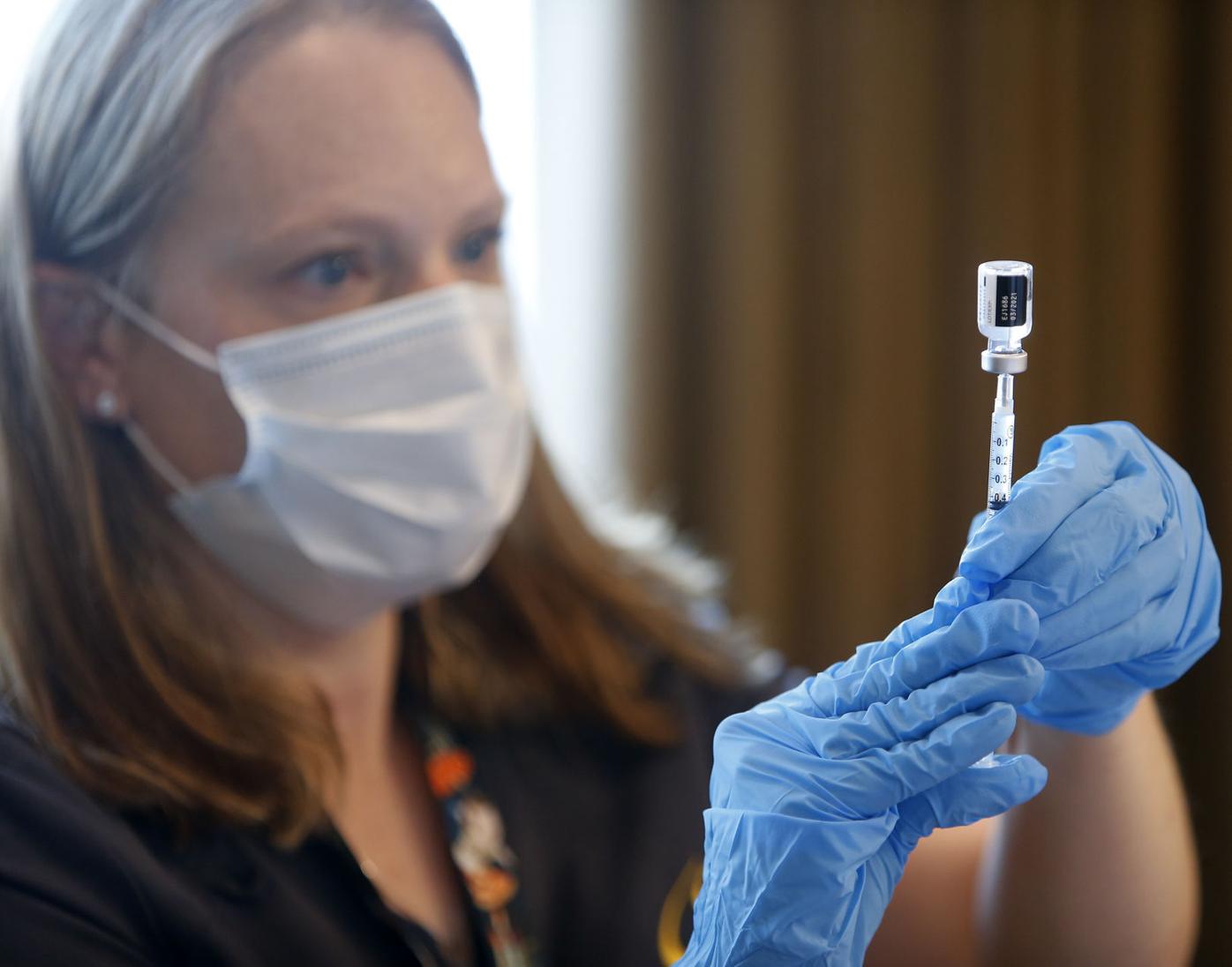 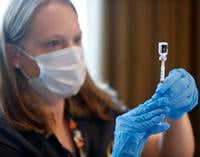 Kim Lee, a pharmacist with Community Pharmacy in Davenport, Iowa, prepares a dose of the COVID-19 vaccine.

CASCADE, Iowa — Helen Koopmann rolled up her sleeve on Tuesday and readied herself for the cold touch of the needle, which entered her arm with ease.

She had been wary of the new coronavirus vaccine but ultimately decided to disregard her skepticism and receive it.

The decision was not just for her, after all, but all the others it could impact if she didn’t do it, Koopmann said.

“I was kind of skeptical about getting it just because I have never had any other vaccine before,” she said. “I guess that’s the reason I really got it was to get back to normal, and I think probably because of the safety of the residents and myself.”

Koopmann was one of the first staff members at River Bend Retirement Community, an assisted-living facility in Cascade, to receive a COVID-19 vaccine dose.

Last week, Stonehill Communities was the first long-term-care facility in Dubuque County to receive vaccines. They are designed to protect people from the coronavirus, which has infected more than 10,000 people in Dubuque County.

The first vaccine authorized for emergency use in the U.S. — and the one administered Tuesday at River Bend — was developed by the New York-based company Pfizer and the German company BioNTech. It must be administered in two doses 21 days apart.

The U.S. Food and Drug Administration on Dec. 11 granted emergency authorization for its use after it was determined to have an efficacy rate of about 95%.

A second vaccine manufactured by Massachusetts biotech firm Moderna also has been authorized.

Nemmers said the assisted-living facility was contracted to work with Community Pharmacy, based out of Gretna, Neb., to receive all of its vaccines. In another 21 days, pharmacy staff will return to do the second round of vaccines.

The first priority for vaccinations in Iowa was health care workers caring directly for COVID-19 patients. Dubuque County public health officials report 1,950 such workers now have been fully vaccinated and another 800 have received their first dose.

Meanwhile, pharmacies are working with long-term-care facilities for vaccinations. It’s unclear how many doses have been administered to such facilities in the county so far.

“Last week, we did 8,500 (vaccines) in Iowa and Nebraska,” said Kim Lee, a pharmacist with a Community Pharmacy location in Davenport. “This week, we hope to surpass that by doing more. We’ve just been going like crazy. We’re hoping to do 9,000 or 10,000 this week.”

Lee said the goal is to have vaccinated every long-term-care facility in Iowa and Nebraska that is partnered with Community Pharmacy by the end of February.

For her, it was not just important to keep everyone healthy and safe — it was personal.

“I personally lost my great-aunt to COVID,” she said. “It’s pretty personal for me. We just want to get everyone where they can hug their families again. I think that’s what it’s all about.”

River Bend resident Elaine Brown, 97, sat patiently in a chair inside her room Tuesday morning. She was ready for the vaccine.

Although it was a new vaccine, it was far from the first time she had been vaccinated, she noted.

She patted her knee in the area where she said she was first vaccinated many years ago.

“It was probably (for) smallpox,” she said. “It was kind of new for kids to be vaccinated, but my dad was an up-and-coming, modern guy.”

Nemmers got her vaccine Monday. She still could feel a small twinge in her arm where it was injected, but she has had no other side effects.

For everyone in the area still awaiting their turn for the vaccine, she urges them to be patient. It will come, she assured.

“I think they just need to know that Iowa is on board, Community Pharmacy is on board, and everyone just needs to know that Phase Two is going to come,” she said. “We just all need to be patient. That’s the big thing. I don’t want people losing hope.”