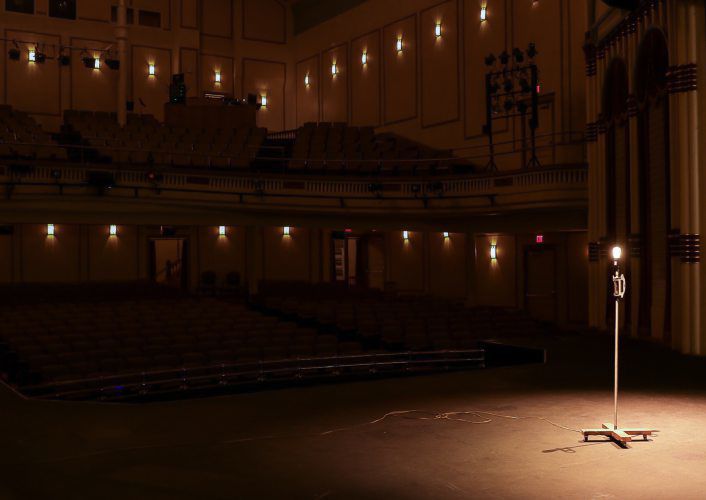 Dubuque’s historic Grand Opera House is among a lengthy list of arts organizations and cultural businesses that sits idle in the wake of COVID-19 restrictions, leaving organizers concerned about future events and financial health. 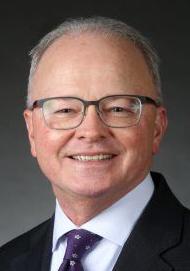 There is an eerie silence within the walls of Dubuque’s Grand Opera House.

Scenery intended to lend to the illusion of transporting audiences to another time and place for a precious hour or two has been unceremoniously propped up against a back wall, a ghost light on stage its only companion.

Until last week, the theater was flourishing with activity with rehearsals well underway for Heartland Ballet’s upcoming production of “Coppélia.” The curtain was set to rise this weekend, when on March 16, the lights abruptly dimmed on that event and a flurry of others due to recommendations by the Iowa Department of Public Health and the Centers for Disease Control regarding community gatherings to help reduce the spread of COVID-19.

“Like all other performing groups, the cancellation came abruptly, and we disbanded with hardly a chance to say goodbye, or plan for the next step,” said ballet Director Marina O’Rourke. “To the dancers that invested eight weeks of time and effort, who gave up other opportunities so they could commit to ‘Coppélia,’ I feel bad. I feel bad for all the performing artists who have had to cancel their projects that have already culminated in hundreds and hundreds of hours of preparation. The shutdown is a great misfortune for the theaters in our community — professional, community and school — who will lose income from these events. When they go back into operation, these ticket sales can’t be made up. They will be lost.”

Other upcoming productions planned at the Grand also have taken a hit.

“The financial stress this is putting on us is enormous,” said Executive Director Frank McClain. “We were less than two weeks from the opening of Heartland Ballet’s production of ‘Coppélia’ when the joint decision by the Grand and the ballet was made to postpone. That was just as the eight-week recommendation for limited mass gathering of more than 50 came down, which overnight then dropped to 10 and included the specific closure of theaters. Within the eight-week scenario, which I now consider the best-case scenario, it also affects Mazzuchelli’s production of ‘Shrek Jr.’, Wahlert’s production of ‘Anything Goes’ and our production of ‘A Grand Reveal.’”

In addition to the loss in ticket revenue from those shows, Mazzuchelli and Wahlert also would have provided a week of rental income for the Grand. And though both schools hope to reschedule, that’s another question mark.

“One of the biggest challenges in all of this is the unknown,” McClain said. “We are hesitant to assign new dates to anything not knowing when circumstances will allow us to resume. We do our biggest shows in the summer. Not knowing when we will be able to hold auditions and begin rehearsals are huge obstacles. Everything about this particular crisis seems foreign and goes against our most primal instinct that follows the dictate, ‘the show must go on.’ On an even more basic level during challenging times, we are accustomed to inviting the community in, and in this situation we, by necessity, must do the opposite.”

Across the tri-states, arts and cultural organizations are only beginning to realize the ripple effects that the pandemic could mean for revenue and job losses, programming postponements and cancellations. Questions that likely will remain unanswered for some time.

The Dubuque Symphony Orchestra was forced to postpone its Classics 4 concerts, also slated for this weekend. Although DSO officials are in the process of rescheduling, it poses a challenge for the 52 musicians, two guest artists and 10 DSO staffers.

“For our performances, we are focused on postponing the events as much as possible and trying to honor our commitments to our ticket holders and our musicians, albeit at some yet-to-be-determined date,” said Executive Director Mark Wahlert. “Canceling a concert, which is our worst-case scenario, could mean up to an $80,000 loss per concert if we had to refund every ticket and sponsor dollar, while still incurring some of the costs and overhead that, at this point, are unavoidable. Even though the symphony has been an excellent steward of our resources, should we have to cancel multiple concerts or should the repercussions of this pandemic extend into the summer or fall, the challenges to the DSO would be enormous and are too difficult to measure at this time.”

Another concern is for its roster of musicians — many of whom rely on performing and teaching as primary sources of income.

“As concerts are postponed or canceled across the country, and as schools close and private lessons evaporate, our musicians are at even greater risk of losing their livelihood,” Wahlert said.

To help musicians, symphony leadership has agreed to send a one-time payment of part of their performance pay.

“Although this is not enough for them to live on, it’s our best attempt to help them through these challenging times,” Wahlert said. “That being said, the DSO won’t have the resources to continue to help in this same way should the pandemic last into the coming months, but we are doing what we can to assist every member of the DSO family.”

The Bell Tower Theater has canceled seven of its youth classes, resulting in a $4,070 revenue loss, though some parents have opted to donate to the organization rather than request a refund. This also means that two part-time affiliates with the classes will not be employed.

Additionally, the theater has postponed its April performances.

“We have nine different bus companies and groups scheduled for the April show,” said Operations and Marketing Manager Miki Robinson. “It is likely that we will lose a large number of those, even with a reschedule.”

That loss could potentially ring in at $5,400, in addition to $17,000 in subscription and single ticket presales also in jeopardy due to refunds.

“Under normal circumstances, the show would have had revenue in excess of $31,000,” Robinson said. “What it will actually earn, we really have no idea.”

Perhaps the biggest blow to the Bell Tower is the cancellation of its annual Free Summer Musical Program High School Show, “We Will Rock You.”

“This is an expected loss of revenue of about $12,500, but we can recoup some of this by canceling it this early and avoiding expenditures,” Robinson said. “Some things — costumes, props — are already purchased, so we cannot undo that, but hopefully, the overall effect on the organization financially will be minimal.

“The other major impact of this cancellation is the 30 kids that won’t have an opportunity to learn and perform — many of whom are likely seniors and for whom this is their last year with us. There are also six adult artists who will lose their stipend.”

The program partially is grant-funded, along with the Free Summer Musical Program in July. Theater officials are hopeful that grantors will allow them to transfer the money entirely to the youth show. However, if the pandemic stretches beyond mid-May, all bets are off.

“The negative impact may be more than we can handle,” Robinson said. “For the future, we are concerned about what this means for all of our revenue streams. This crisis is hitting nearly everyone financially, and we are afraid that donations and sales very well might not meet goals for the rest of the year and possibly into subscription sales for 2021.”

Despite unanswered questions and continued uncertainty in the months ahead, McClain said that organizations that are home to arts and culture are a scrappy bunch. That the ghost light remains illuminated in the center of the Grand’s stage serves as a kind of symbol.

“Although the theater is empty, we will return,” McClain said. “If we were going out of business or the theater was abandoned, the ghost light would be off.”

Several have rolled out virtual initiatives to help the community weather the storm and to do what they do best.

“We are theater people accustomed to thinking outside the box, so I have faith that we will come through this and, in the meantime, make the best of a bad situation,” McClain said. “We are looking at using our now bare stage to live-stream local musicians and are asking our online community for input on what they would like to see and what ideas they have.

“We are still reeling from how quickly circumstances have changed, but as the fog clears and the creative juices of our talented Grand family start to flow, I think we are going to find ways to continue to entertain, educate and inspire. The show will go on. It just may be experienced in different and surprising ways.”

DubuqueFest Fine Arts Festival, which would have marked its 43rd year on May 15-17, has opted to cancel, while Julien Dubuque International Film Festival organizers have rescheduled the ninth annual April event for June 17-21.

The Dubuque Museum of Art will remain closed until Saturday, April 4, with plans to provide content through Facebook and at www.dbqart.org.

“Although we anticipate lower-than-budgeted fundraising dollars in next few months, we are confident our members and donors will continue to support our needs to the best of their ability,” said Interim Executive Director Julie Steffen. “We have a generous community, and we will get through this together.”

Officials at the National Mississippi River Museum & Aquarium anticipate that their site will remain closed through Friday, April 3.

“The spring break season is one of our peak visitor, school group and banquet seasons,” said President and CEO Kurt Strand. “Financially speaking, we anticipate a loss of approximately 75% of our March and potentially 100% of our April budgeted revenue.”

Unlike organizations that can shut down more completely, the river museum will continue to expend resources associated with the care of its more than 2,000 animals.

“Financial hardships are ahead for many individuals, families, businesses and nonprofit organizations like ours,” Strand said. “Whether you can donate food to those in need, check in with a neighbor or purchase a gift certificate for a local restaurant or business, now is the time to come together and support one another — even from a distance.”