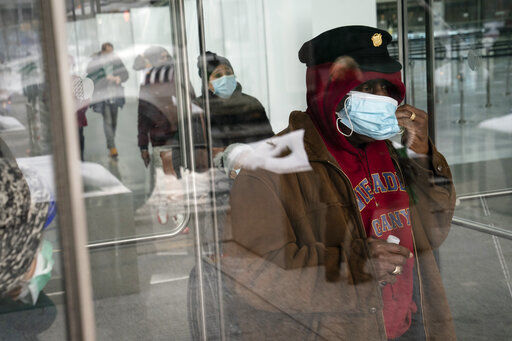 A patient adjusts his face mask as he leaves a COVID-19 vaccination site inside the Jacob K. Javits Convention Center in New York. States are beginning to ease coronavirus restrictions, but health experts say we don’t know enough yet about variants to roll back measures that could help slow their spread. 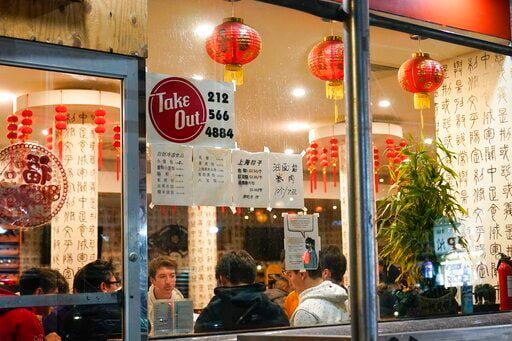 People eat inside the New Shanghai Deluxe restaurant on Feb. 12 as indoor dining resumes in the Chinatown neighborhood of New York.

A patient adjusts his face mask as he leaves a COVID-19 vaccination site inside the Jacob K. Javits Convention Center in New York. States are beginning to ease coronavirus restrictions, but health experts say we don’t know enough yet about variants to roll back measures that could help slow their spread.

People eat inside the New Shanghai Deluxe restaurant on Feb. 12 as indoor dining resumes in the Chinatown neighborhood of New York.

NEW YORK — As states lift mask rules and ease restrictions on restaurants and other businesses because of falling case numbers, public health officials say authorities are overlooking potentially more dangerous COVID-19 variants that are quietly spreading through the U.S.

Scientists widely agree that the U.S. simply doesn’t have enough of a handle on the variants to roll back public health measures and is at risk of fumbling yet another phase of the pandemic after letting the virus rage through the country over the last year and kill nearly 500,000 people.

“Now is not the time to fully open up,” said Karthik Gangavarapu, a researcher at Scripps Research Institute whose team works closely with San Diego health officials to watch for mutant versions of the coronavirus. “We need to still be vigilant.”

Over the past two weeks, the daily averages for both coronavirus cases and deaths have dropped by about half in the U.S., according to data from Johns Hopkins University. And as of Wednesday, over 40 million people — about 12% of the population — had received at least one dose of a vaccine.

The problem, as experts see it, is that the U.S. has been slow to ramp up a rigorous genetic surveillance system for tracking the variants’ spread and measuring how much of a foothold they have gained here.

“The fact of the matter is we’re kind of in the dark,” said Dr. Diane Griffin, who studies infectious diseases at Johns Hopkins. She said the variants are “probably widespread even if we don’t know it.”

On Wednesday, the Biden administration announced it will spend $200 million for the Centers for Disease Control and Prevention to triple its levels of genetic sequencing to identify mutations that might make the coronavirus more infectious or more deadly. Separately, Congress is considering a bill that would provide $1.75 billion for such work.

A more contagious and possibly more deadly variant that was first identified in Britain has been found in at least 42 states. Other variants first detected in South Africa and Brazil have been reported across the U.S. in low numbers. The South Africa one is especially worrisome because of evidence it may diminish the effectiveness of the vaccines.

“We’re chasing a moving target. It’s changing a little too fast for comfort,” said Dr. Lucio Miele a geneticist at LSU Health Sciences in New Orleans. “We need to be proactive. We’re not invulnerable.”

Detecting variants and knowing where and how widely they are spreading could be critical to preventing another deadly wave of COVID-19 like the one that overwhelmed hospitals this winter.

In Europe in late 2020, once surveillance began flagging variants like the one that was causing cases to rage out of control and overwhelm hospitals in England, governments across the continent responded by imposing strict travel restrictions and lockdowns.

But in the U.S., the emergence of variants has been met with a shrug among many state and local officials amid the overall drop-off in confirmed infections.

Florida, for example, has the country’s highest tally of cases of the British variant, according to the CDC. But state leaders seem to have already moved on from the coronavirus, including Gov. Ron DeSantis.

When asked about the rise of new strains last week, DeSantis told reporters, “The media is worried about that, obviously. You guys really love that.”

Florida has repealed many restrictions and hosted 25,000 fans for the Super Bowl in Tampa and 30,000 spectators at the Daytona 500 a week later in what was the largest sporting event in the nation since the start of the pandemic.

Restrictions are also being eased in California, which is recovering from a surge of COVID-19 that overran its hospital system in recent months. California officials expect a substantial number of counties to be allowed to offer limited-capacity indoor dining and open up theaters, museums and gyms. The state is also reporting the country’s second-highest case count for the British variant.

Elsewhere, states such as North Dakota, Montana, Iowa have lifted mask mandates in recent weeks, and many more have eased restrictions on businesses like restaurants, bars and stores.

Public health experts say part of the problem is that the latest statistics may be misleading. The CDC, for example, has reported only about 1,300 cases of emerging variants nationwide.

“That is an undercount,” said Johns Hopkins epidemiologist Dr. Caitlin Rivers. She and others say that figure reflects the country’s underdeveloped genetic surveillance system.

Last month, Minnesota was the first state to detect the COVID-19 variant identified in Brazil. By testing about 2% to 3% of the state’s positive COVID-19 samples, Minnesota’s Department of Health has since identified two cases of the Brazilian variant and 40 of the British one.

“It is somewhat a meaningless number,” said Kathy Como-Sabetti, an epidemiology manager for the health department. “It is a small fraction of our total number of cases.”

Como-Sabetti said the state is bracing for a potential wave of illness if variants proliferate unchecked.

Some scientist have called for the U.S. to test about 5% of positive COVID-19 samples — which, this week, would represent about 3,900 sequences — to stay on top of variants. Currently, the U.S. sequences between 0.3% to 0.5% of virus samples. Britain sequences about 8% of its positive cases and Denmark around 12%.

“We are woefully behind when it comes to sequencing technology,” Miele said.

In the meantime, Chicago and surrounding suburbs allowed indoor dining to resume in January for the first time since October and reopened, with crowd limits, major cultural attractions including the Field Museum and Shedd Aquarium. Boston opened up gyms, movie theaters and sightseeing harbor cruises this month.

New York City restaurants got the green light to open for indoor dining last week, despite concern from some local officials.

“Are we defying the global pattern of variants doubling every 10 days?” tweeted City Council member Mark D. Levy. “Or are variants in fact growing here and we just aren’t being told?”