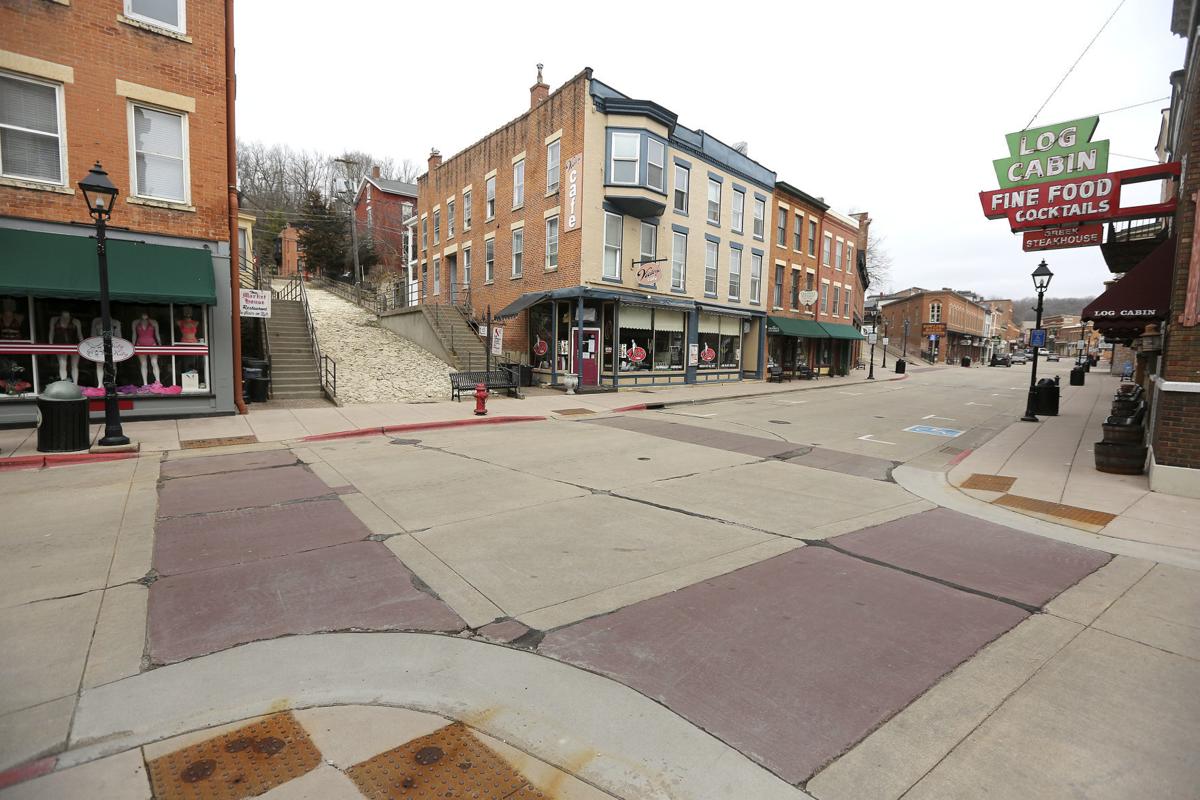 Downtown Galena, Ill., was largely deserted on Monday, March 23, 2020, in the wake of the governor's shelter-in-place order in response to the COVID-19 pandemic. 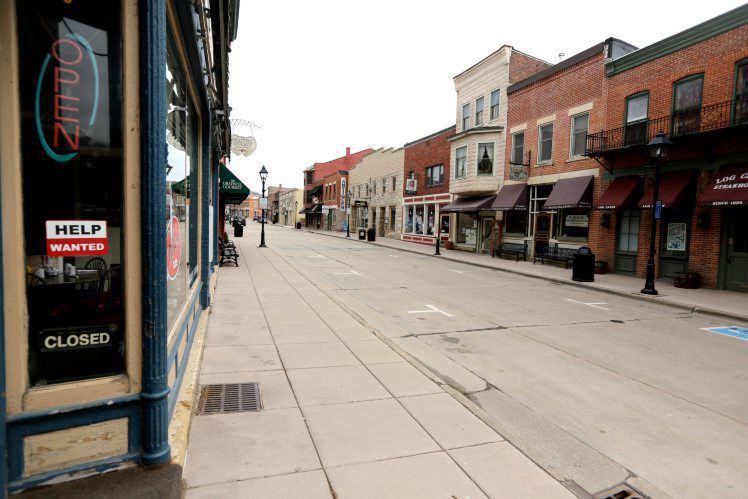 Downtown Galena, Ill., is largely deserted on Monday in the wake of the governor's stay-at-home order in response to the COVID-19 pandemic.

SUBSCRIBE We are providing free community access to critical and urgent COVID-19 pandemic information relating to public health, safety and security. To access our full COVID-19 coverage, subscribe to our digital or print products for as little as 43 cents a day.
1 of 2

Downtown Galena, Ill., was largely deserted on Monday, March 23, 2020, in the wake of the governor's shelter-in-place order in response to the COVID-19 pandemic.

Downtown Galena, Ill., is largely deserted on Monday in the wake of the governor's stay-at-home order in response to the COVID-19 pandemic.

GALENA, Ill. — Downtown Galena, one of the most popular tourist destinations in Illinois, resembled a ghost town this weekend.

Streets typically packed with cars and sidewalks crammed with out-of-town shoppers were desolately empty these past few days. It is the end of the slow winter season, and many stores should be preparing for an influx in traffic.

Instead, nearly all of them have “closed” signs hanging out front.

Luanne Gagliardi owns LuLu’s, LuLu’s Too and Galena Candle & Bath Co. in downtown Galena. She had never seen anything like it before.

“I would say I’m freaking out,” Gagliardi said Monday. “We live for the weekends. On Saturday, no one was in town, and I had one sale.”

Most downtown Galena businesses were forced to close their doors on Saturday as part of Illinois’ “shelter in place” order, which required all businesses that are not deemed essential to remain closed until April 7. The policy was enacted as a response to the growing number of COVID-19 cases being reported in the state, with officials trying to encourage residents to stay home and discourage public interaction to slow the spread of the coronavirus that causes it.

While businesses such as grocery stores and gas stations are allowed to stay open, and restaurants can make delivery and carryout orders, nearly all brick-and-mortar retail shops are closed entirely.

The number of confirmed cases of COVID-19 in Illinois continued to shoot up Monday.

The state’s total increased by another 22% on Monday, with 236 new cases. The state now has 1,285 in all, including one case in Jo Daviess County. Twelve people have died.

On Monday, Wisconsin Gov. Tony Evers ordered the closure of all non-essential businesses in the state as part of a “safer-at-home” order, which will take effect today.

In Iowa, 15 more cases were announced Monday — including two more in Dubuque County. The statewide total is 105.

Iowa Gov. Kim Reynolds said Monday afternoon that a “shelter in place” order for the state was not necessary as of now.

“We are not in a place where we are going to order a shelter-in-place or stay-at-home,” she said. “We are continuing to evaluate what those metrics look like. We had a group that was working on that last night and continuing to work on it throughout the day.”

Meanwhile, on Monday, Dubuque County supervisors discussed the possibility of instituting a countywide shelter-in-place order, since the state has not issued one.

“Hypothetically, if you are an Illinois or Wisconsin resident, Iowa is open for business,” said Supervisor Jay Wickham. “I make my living opening businesses. I don’t ever want to see them closed. But the science and what we’re learning from all over the world shows that migration and travel is not helpful at all to minimize an outbreak of COVID-19.”

Wickham said this was a consideration unique to Dubuque and other border cities.

“They could, would and are likely traveling into Dubuque to buy tennis shoes,” he said. “Do we want that?”

“I do wish the governor would take executive action, but short of that, we do have states right across the river from us that have taken the step,” he said.

Supervisor Ann McDonough, though, questioned the county’s ability to enforce its own order.

“You see on the news people going to beaches or ignoring the order otherwise,” she said. “I do trust this governor to look at the enforcement of what she does. We can call Sheriff (Joe) Kennedy, but that’s a weighty decision for any leader.”

The supervisors did not take action Monday.

Gagliardi said some downtown businesses will continue on by pushing online sales. However, those sales are typically a fraction of in-store purchases.

Other stores, such as LuLu’s, don’t have websites.

“We are being hit hard by this,” Gagliardi said. “It’s very sad. You just don’t ever see Galena like this.”

Big Bill’s Sandwich Shop and Coffee Bar still is serving up takeout orders. Owner Jack Deiter said Monday that he has brought in some revenue, but he anticipates the financial impact of the shelter-in-place order will be substantial.

“I’m still shocked at how quickly everything went down,” he said. “People immediately stopped showing up. It’s like the town has disappeared.”

For many businesses, the challenge now is to outlast the order. While it is scheduled to run through April 7, Gagliardi said there is no guarantee it will end then. And even when the order is lifted, she doubts tourists will immediately return to Galena.

“That fear of coronavirus is still going to be there,” Gagliardi said. “It’s hard to get anyone to come in your store when they are afraid to touch the door handle.”

Nathan Vondra, chairman of the Galena Area Chamber of Commerce Board of Directors, said his biggest concern for downtown businesses is not knowing when tourists will return.

“It’s hard to tell how quickly our downtown will pick up again,” he said.

Deiter said he thinks tourism will boom when the order is lifted.

“I think people will come out again in big numbers,” he said. “They are going to be tired of self-quarantine and are going to want to go out.”

Dubuque's mayor on Monday night urged residents to stay home for at least 14 days in an effort to slow the spread of COVID-19.

Roy Buol said those who must leave their homes and those who do for exercise or fresh air should practice social distancing and should use appropriate caution in their interactions with others.

“Each day, we are seeing more and more positive cases of COVID-19 in our state and our county,” he said. “At this point, the only way we can prevent continued spread of the virus and strains on our health care system is for everyone to take personal responsibility by staying home as much as they can.”

One of the residents newly identified to have the coronavirus is between 18 and 40 years old, while the other is 61 to 80 years old.

As is typical, no additional information has been released on those cases, such as what city the individuals live in.

Dubuque County's six cases are the third most of any county in the state. Johnson County has 35 cases, while Polk has 12 confirmed cases.

Allamakee, Linn and Dallas counties also have six cases each.

Dubuque's mayor on Monday night urged residents to stay home for at least the next 14 days in an effort to slow the spread of the coronavirus.

Where is COVID-19? Maps of confirmed cases in Illinois, Iowa, Wisconsin (as of Wednesday night)

Officials announced Wednesday that another 21 cases of COVID-19 have been confirmed in Iowa.