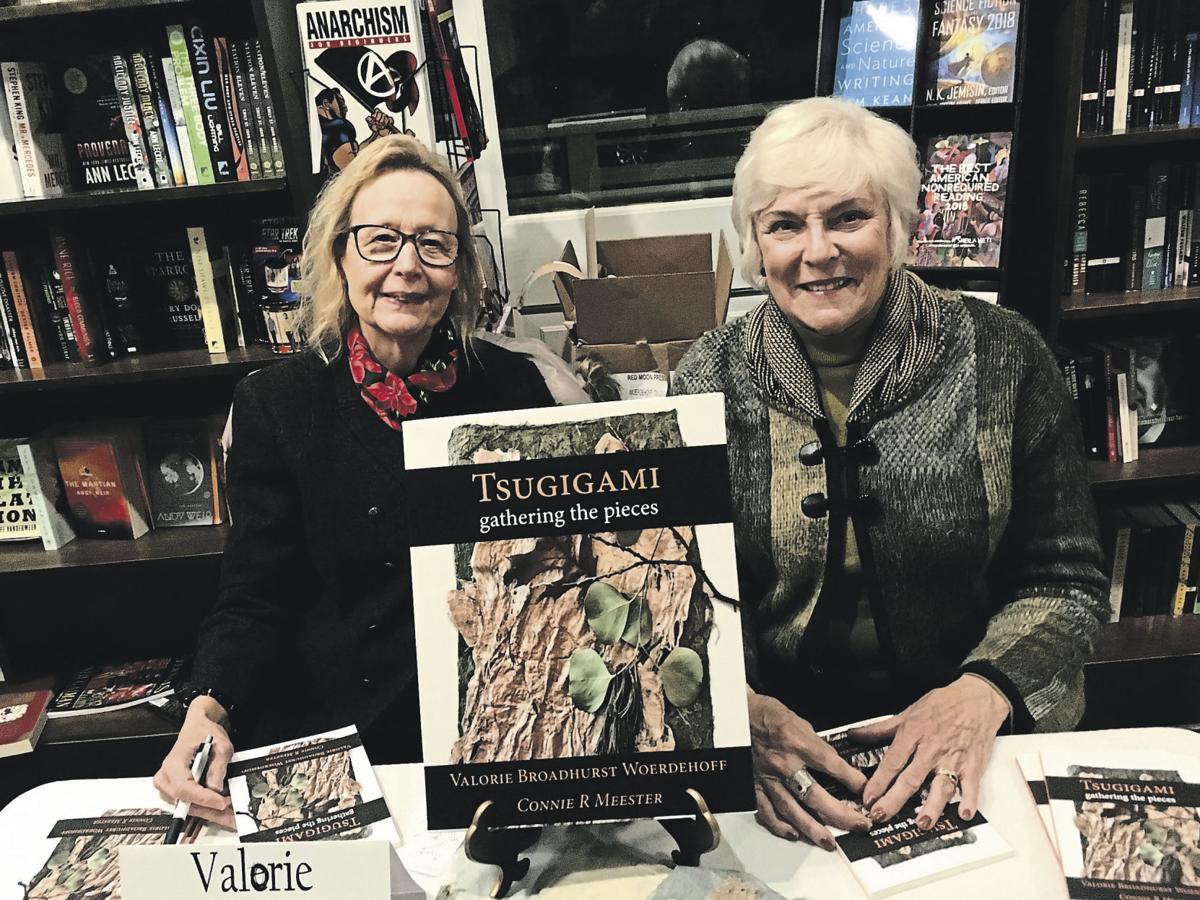 Poets, writers and artistic partners Valorie Broadhurst Woerdehoff (left) and Connie Meester garnered a first-place award from Haiku Canada for the book they collaborated on, “Tsugigami: gathering the pieces.” 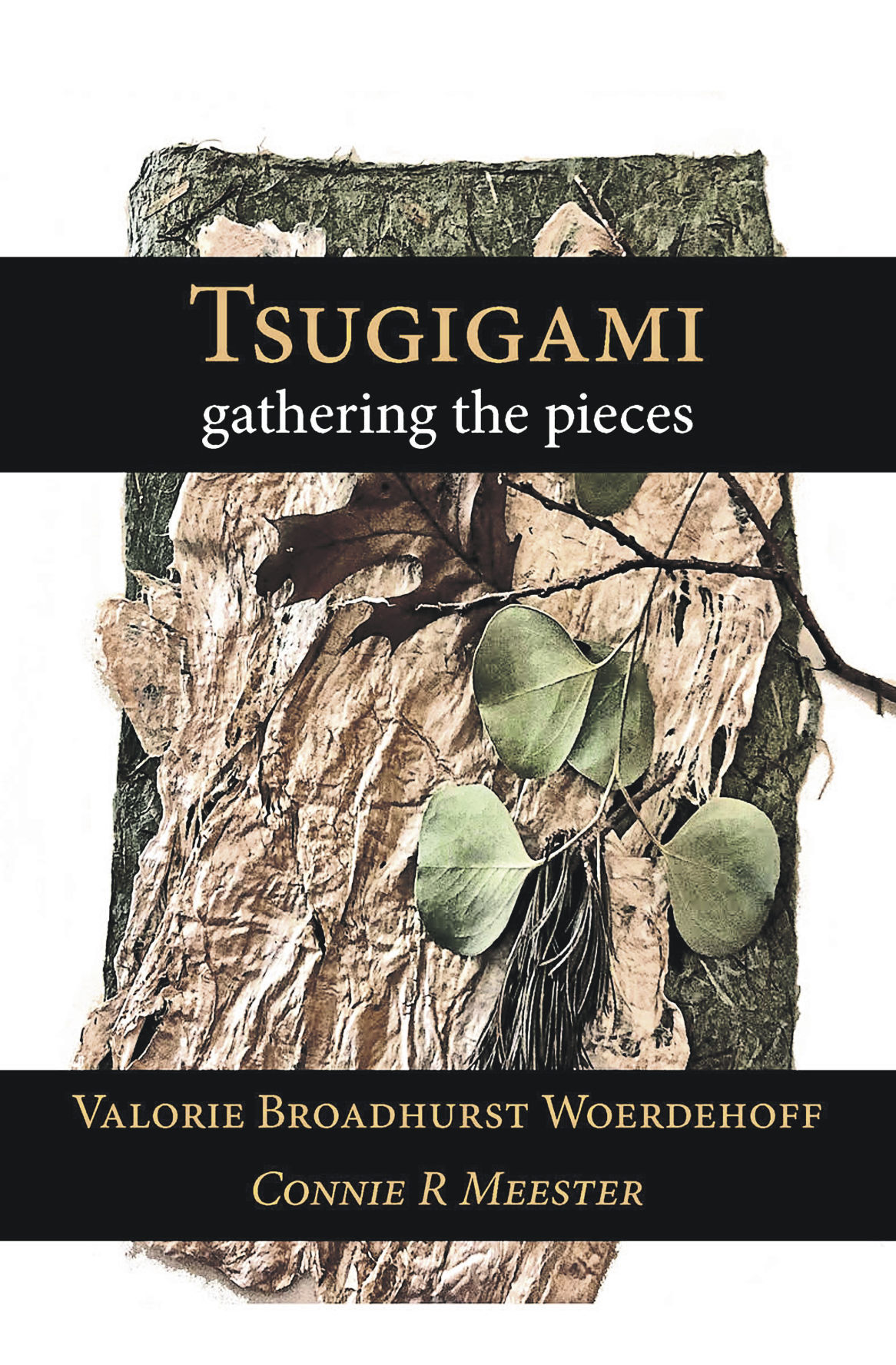 Poets Valorie Broadhurst Woerdehoff and Connie Meester garnered a first place award from Haiku Canada for the book they collaborated on, "Tsugigami: gathering the pieces." 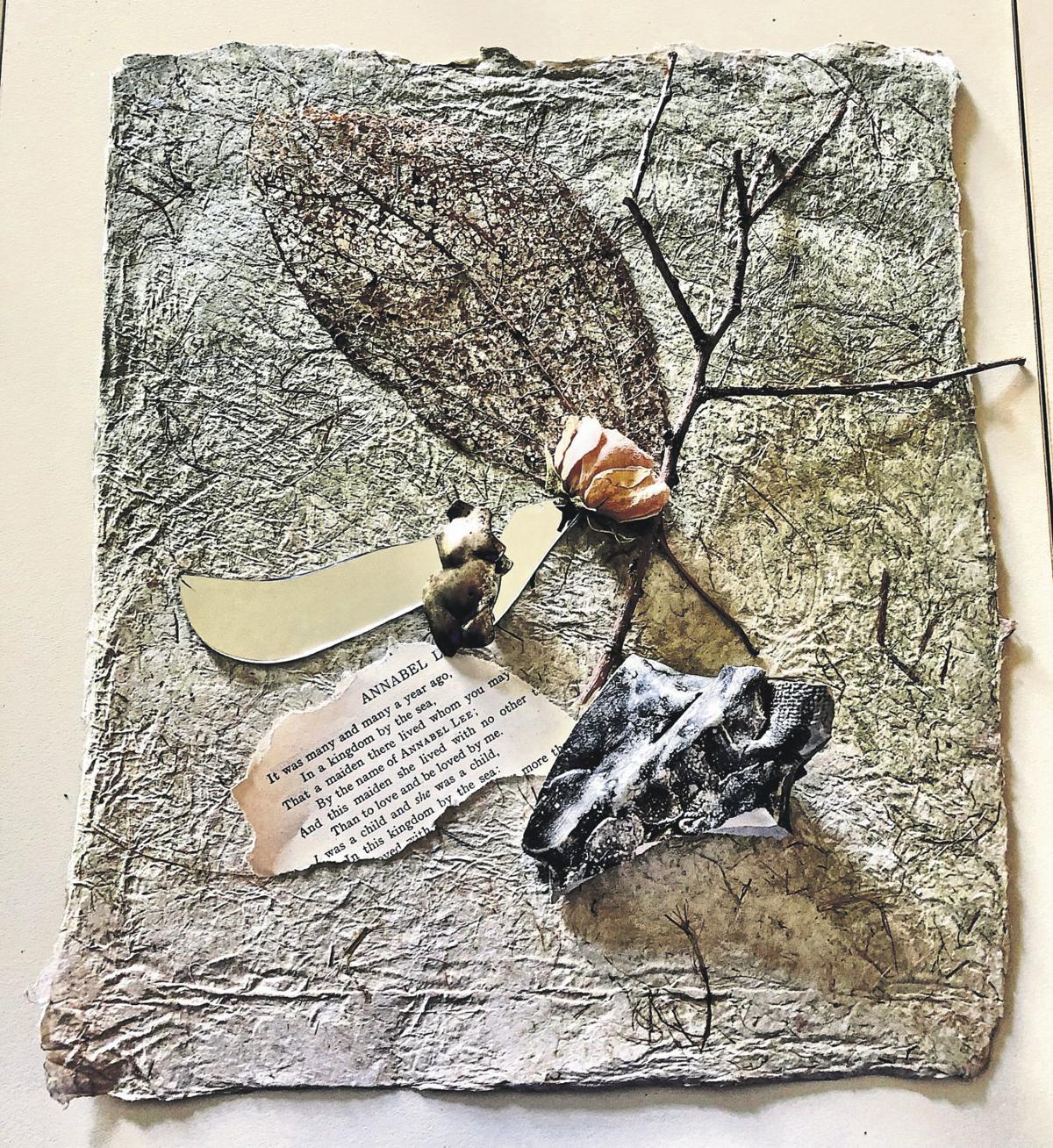 One of the handmade paper/natural objects collages Valorie Broadhurst Woerdehoff and Connie Meester created for their book of haiku poetry.

Poets, writers and artistic partners Valorie Broadhurst Woerdehoff (left) and Connie Meester garnered a first-place award from Haiku Canada for the book they collaborated on, “Tsugigami: gathering the pieces.”

Poets Valorie Broadhurst Woerdehoff and Connie Meester garnered a first place award from Haiku Canada for the book they collaborated on, "Tsugigami: gathering the pieces."

One of the handmade paper/natural objects collages Valorie Broadhurst Woerdehoff and Connie Meester created for their book of haiku poetry.

Many people think of the art of writing as a solo enterprise. They picture a wild-eyed, highly caffeinated creative type locked in the writer’s room, surrounded by piles of notes and a wastebasket filled with discarded paper balls of bad ideas.

It’s a fair description for some. But for poets Valorie Broadhurst Woerdehoff, 65, and Connie Meester, 73, their collaboration has been, as Valorie said, “haikupathic.”

“We have a working relationship that is really synchronized,” Woerdehoff said.

The pair first met in 1994 when they both took a poetry class at Loras College in Dubuque, taught by Bill Pauly, a haiku poet and writing instructor.

“I remember her walking in the door,” Woerdehoff said of her writing partner.

“I really didn’t know anything about haiku. I took that class, and Valorie and I met on the first night,” Meester said. “It’s been 25-and-a-half years now.”

Woerdehoff, who has lived in Dubuque for 35 years, and Meester have partnered on hundreds of haiku works, most of them in rengay, a haiku form of linked verse.

“I may get an idea and fire off the first three lines to Valorie,” Meester said. “She looks at it and says, ‘I can do something with this,’ and writes the next two lines. Then, I come back in with three lines, then she comes in with three lines. I come in with two, and she finishes it with three.”

While the description might sound complicated, the finished product is a simple piece loaded with imagery and themes of family, nature and relationships.

“We usually don’t start with a subject or theme,” Woerdehoff said. “Most rengay writers do, but I’d say we’ve kind of pushed the envelope on that form.”

Woerdehoff worked at Loras College in marketing and as a grant writer before her retirement more than two years ago. She has continued to work periodically for the school doing marketing and editing work.

“Writing is how I process the world. It’s like breathing. It’s my first language,” she said. “Collaboration for me is very life-giving. It invigorates my creativity because it’s always a surprise.”

Meester worked in occupational therapy and as a special education teacher but now spends her time pursuing her artistic passions. She recently began studying oil and acrylic painting.

“I’ll do that until the inspiration sort of ebbs, and then I go to writing,” she said. “The writing is always in the back of my mind. The collaboration with Val is always there. I have my notebook in my hip pocket all the time.”

Their collaboration continued when they began assembling visual art pieces for the book.

“The Japanese word ‘tsugigami’ means ‘collage’,” Meester said. “So, that was the goal, to create collages.”

Meester used a seventh century Japanese method of paper-making to create the paper that she and Woerdehoff combined with natural objects they’d collected. The result is an array of mixed media photographs that were used to illustrate the book.

“When we were putting the book together, Val came and stayed for four or five days,” Meester said. “We worked for hours and hours. Then, it was time to do the artwork. We laid out the papers and the pieces we’d collected. Then, the two of us just stood there, practically silently, just assembling it. This is how we work.”

Woerdehoff said the two have collaborated with other artists with varying degrees of success, but it’s never been with the same sense of synchronicity that she and Meester share.

“We’ve enjoyed this partnership,” she said. “It’s so easy for us, and we have this almost mystical connection.”

The beauty of haiku

This poem from the the book is an example of linked verse, in which each poet writes alternate lines.

garden play, Gramma fashions me a bonnet of giant sunflowers

my chair next to Granddaddy's under the weeping willow

racing dawn to pick sugar snap peas ahead of the deer

hollyhock dolls marry in a patch of bluebells

violets grow wild under the boxwoods

webs connect beds in the garden and house