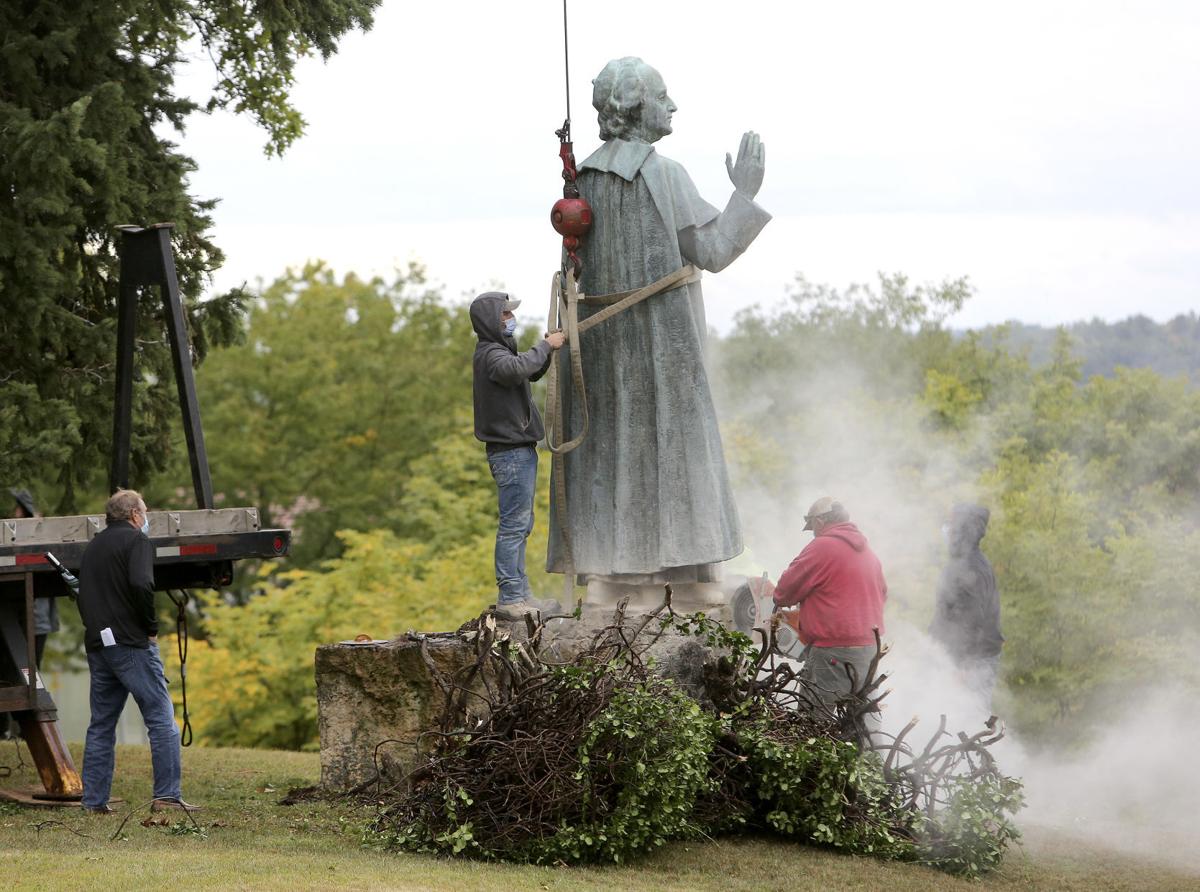 Workers remove the statue of Bishop Mathias Loras on the campus of Loras College on Tuesday. The school announced the move after learning new information about the school founder’s slave ownership. 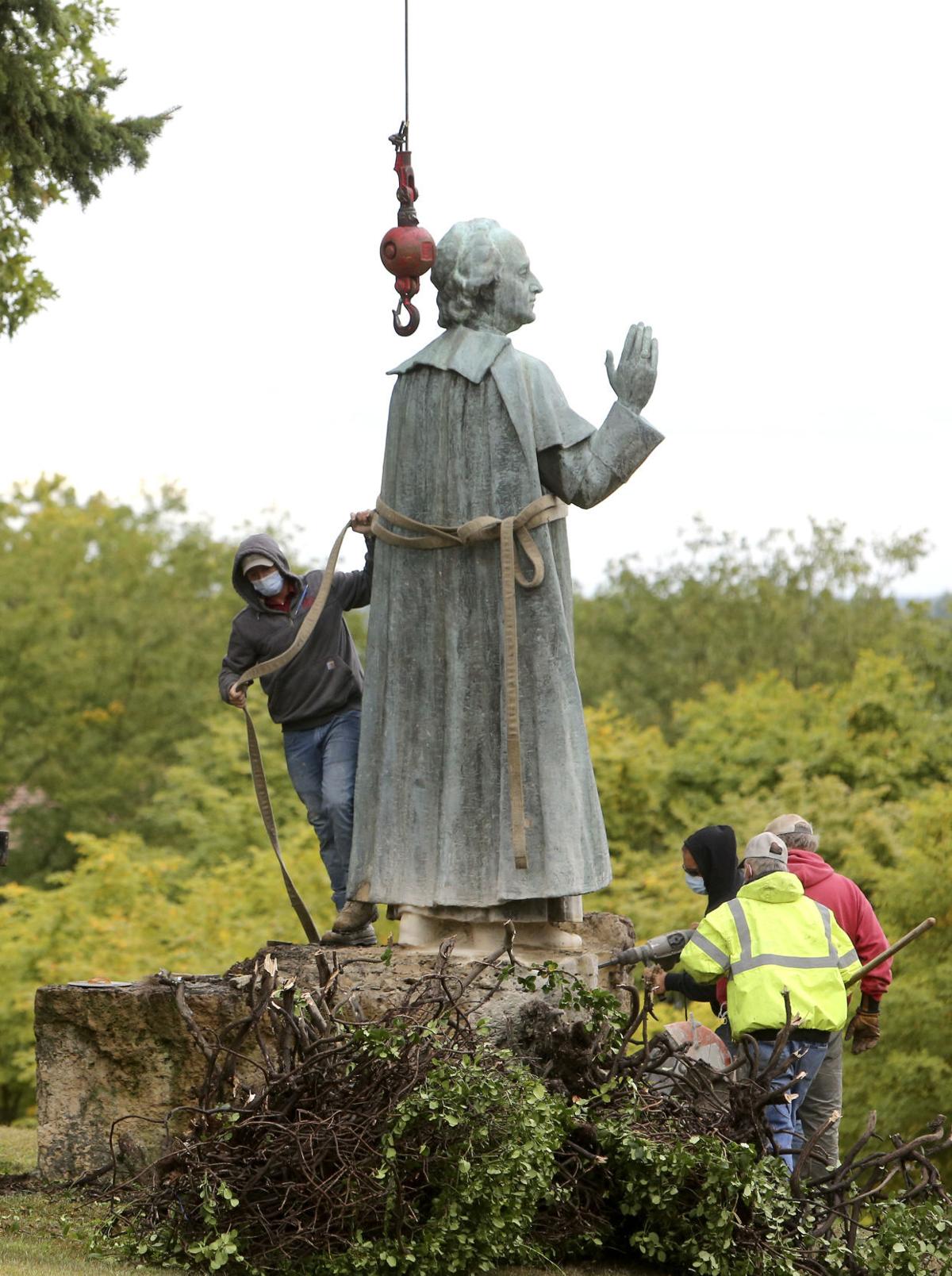 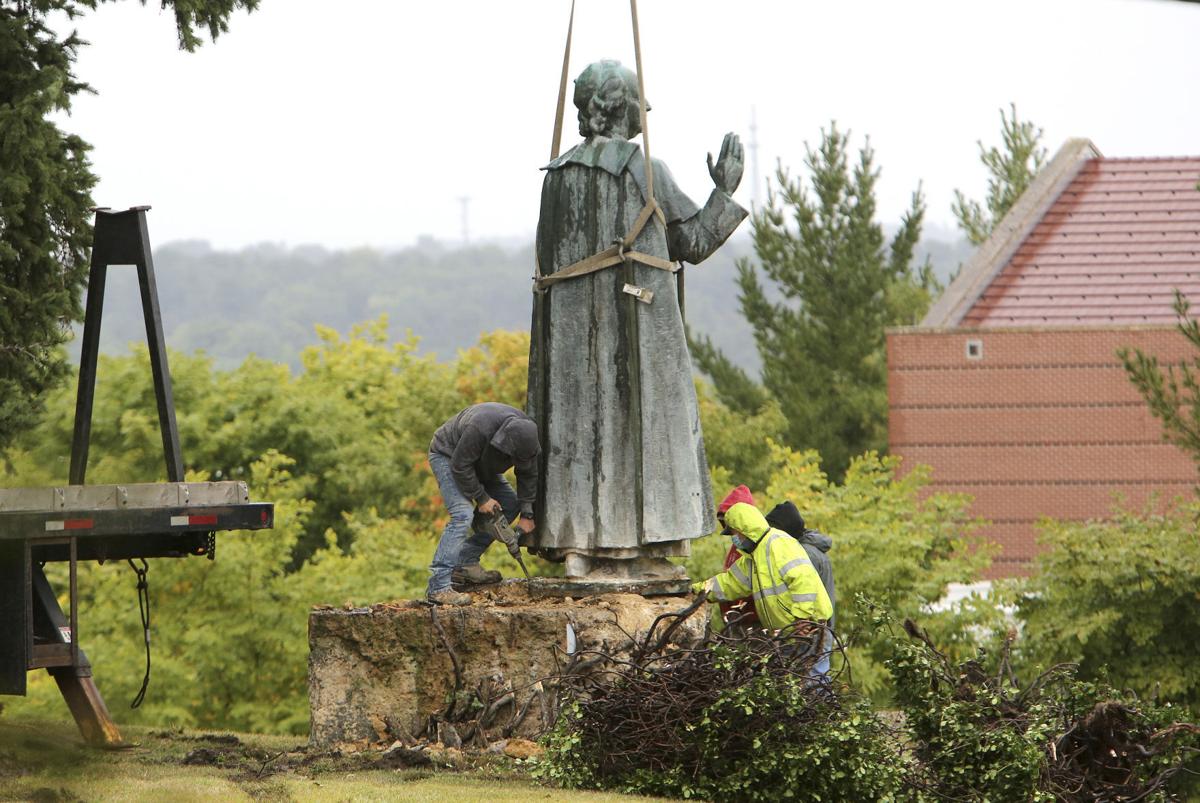 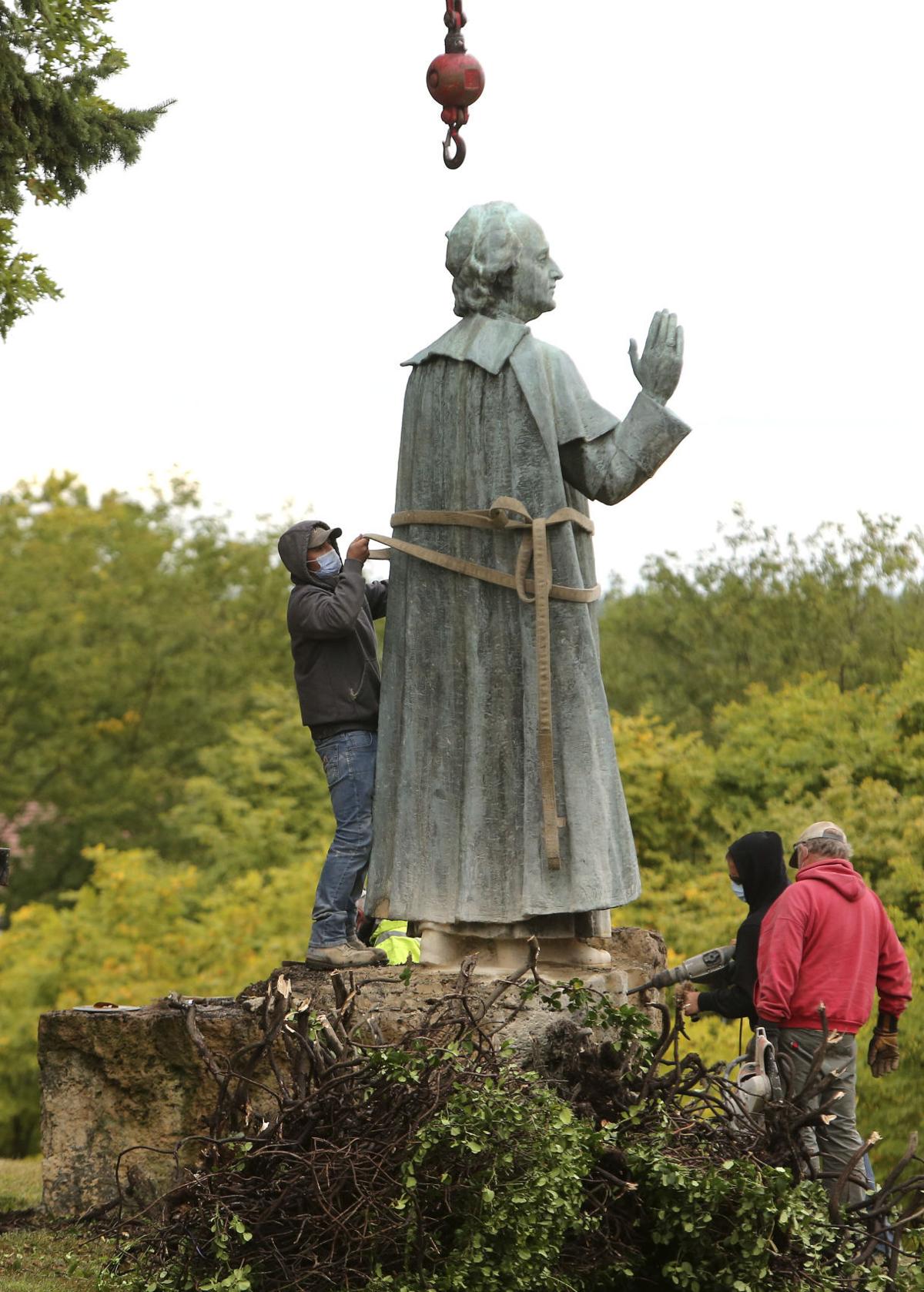 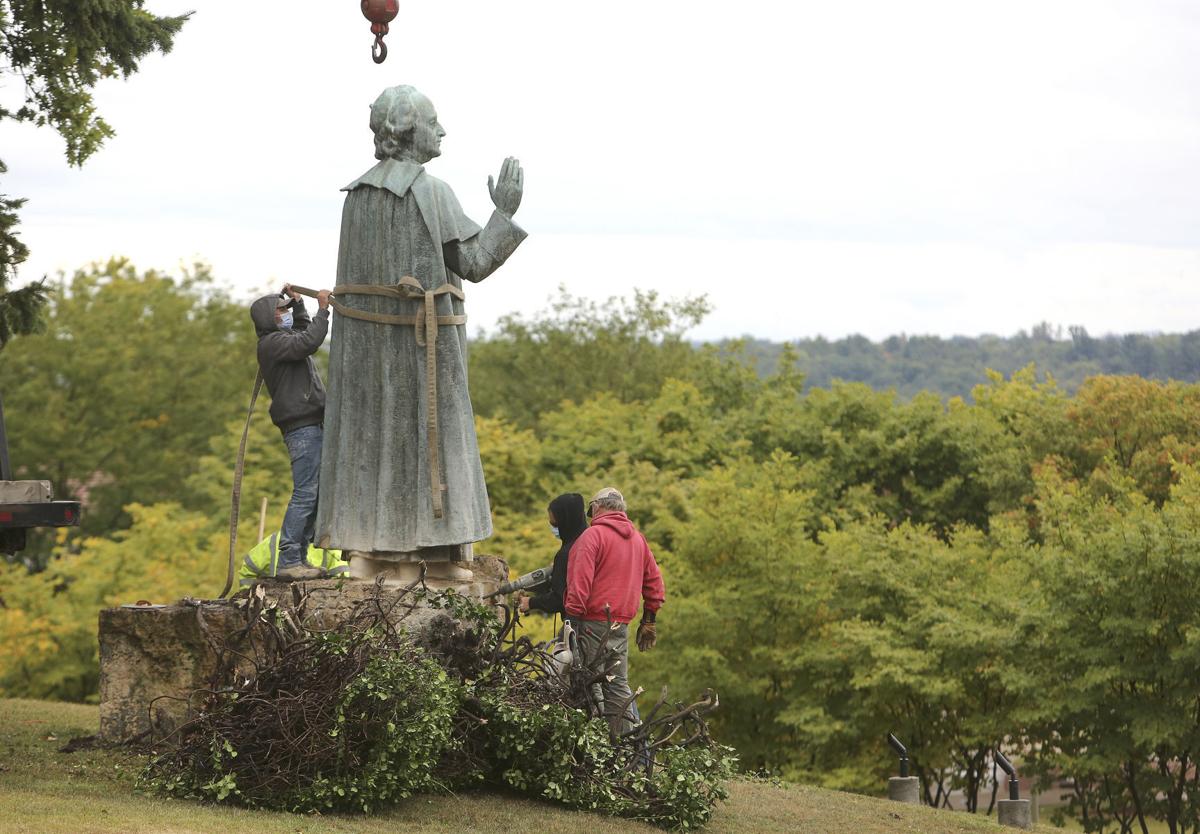 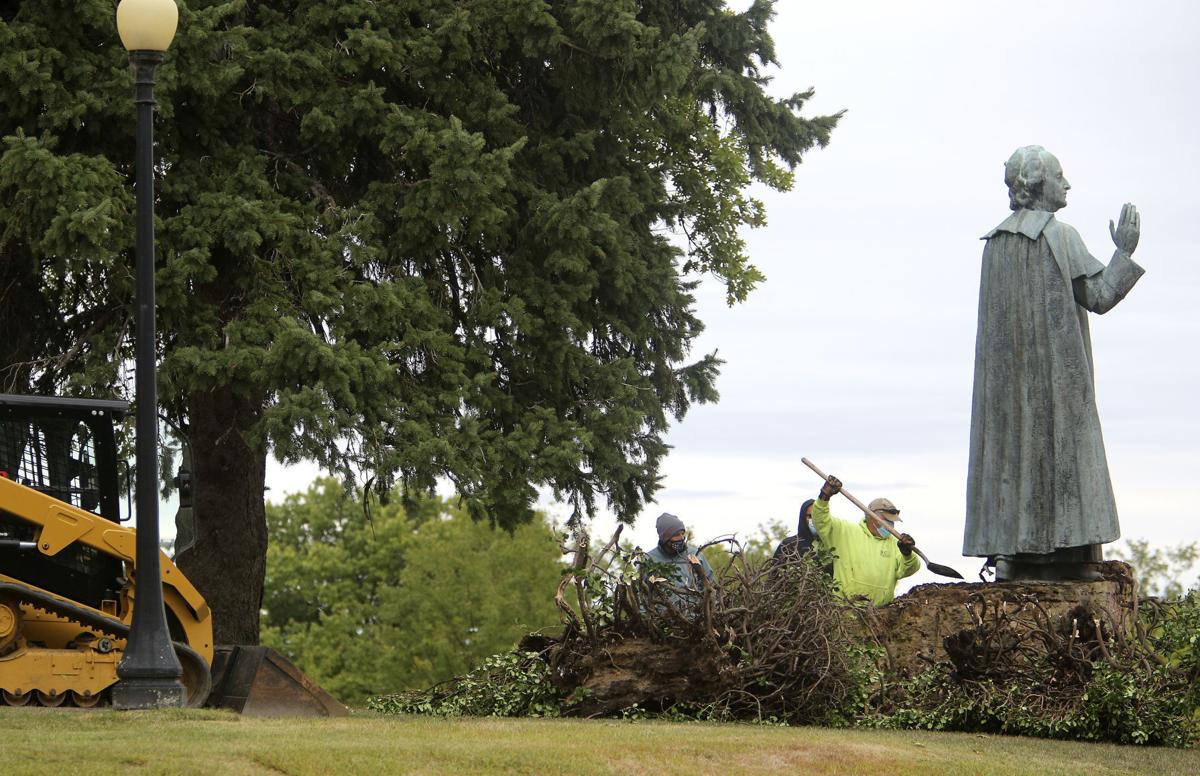 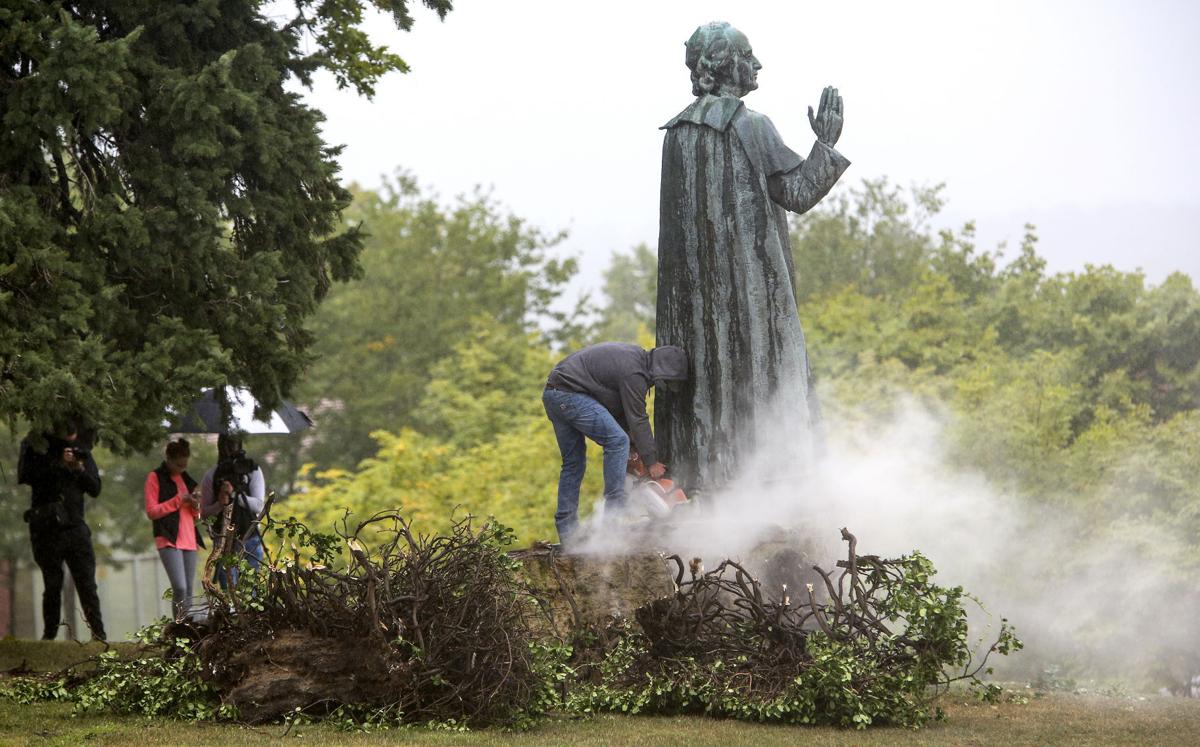 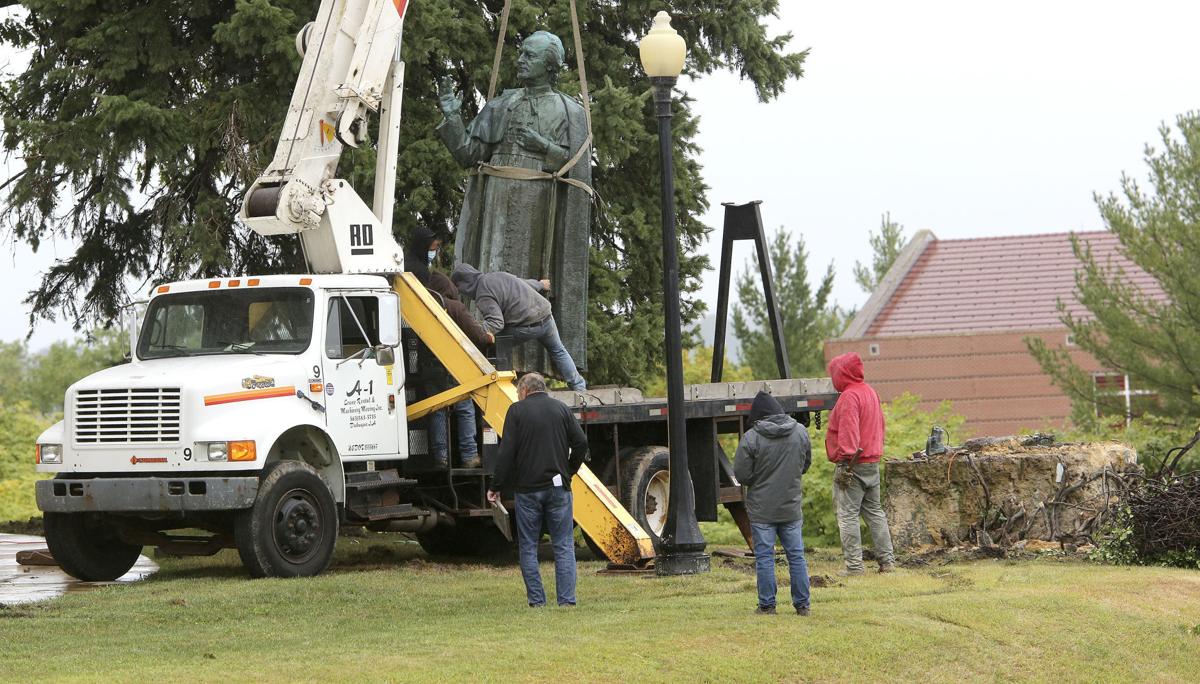 The statue is loaded onto a truck before being taken to a storage location on campus. 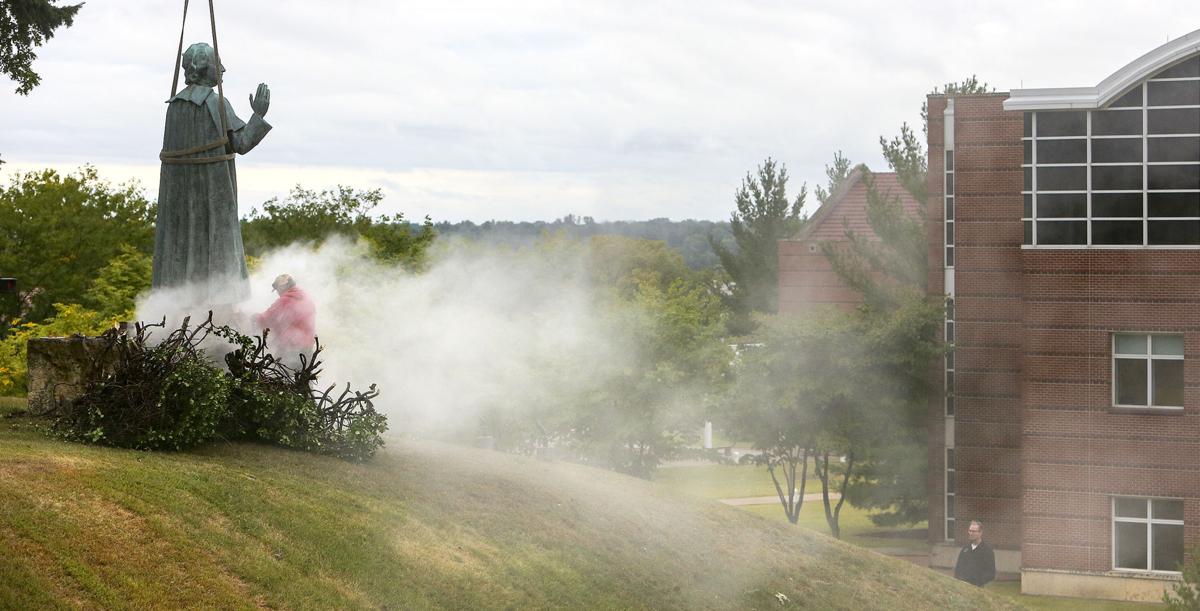 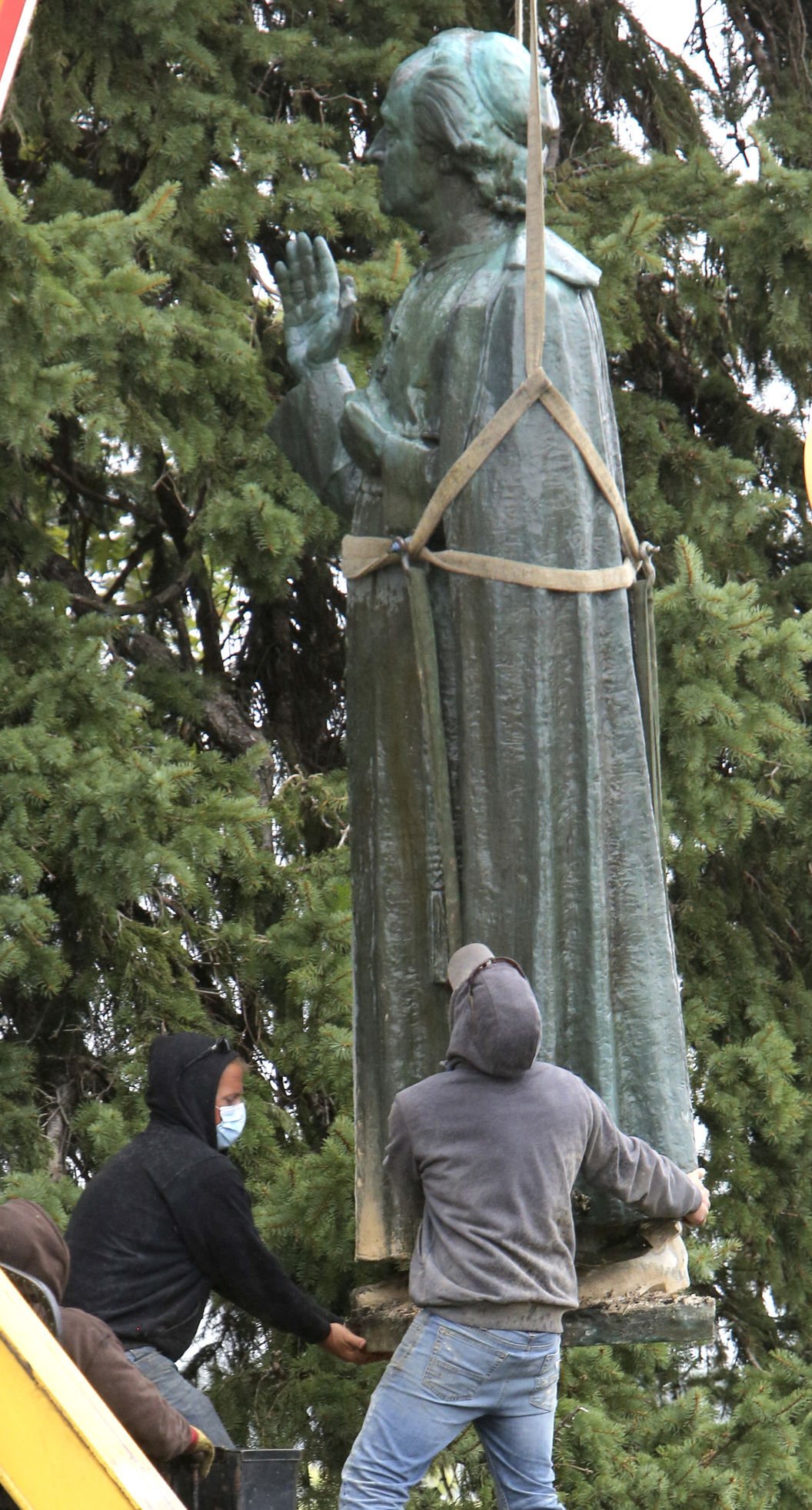 The statue of Bishop Mathias Loras is placed on a truck before being taken to a storage location on the campus of Loras College on Tuesday. The school announced that the statue will be removed after school officials learned new information about Bishop Loras’ slave ownership. 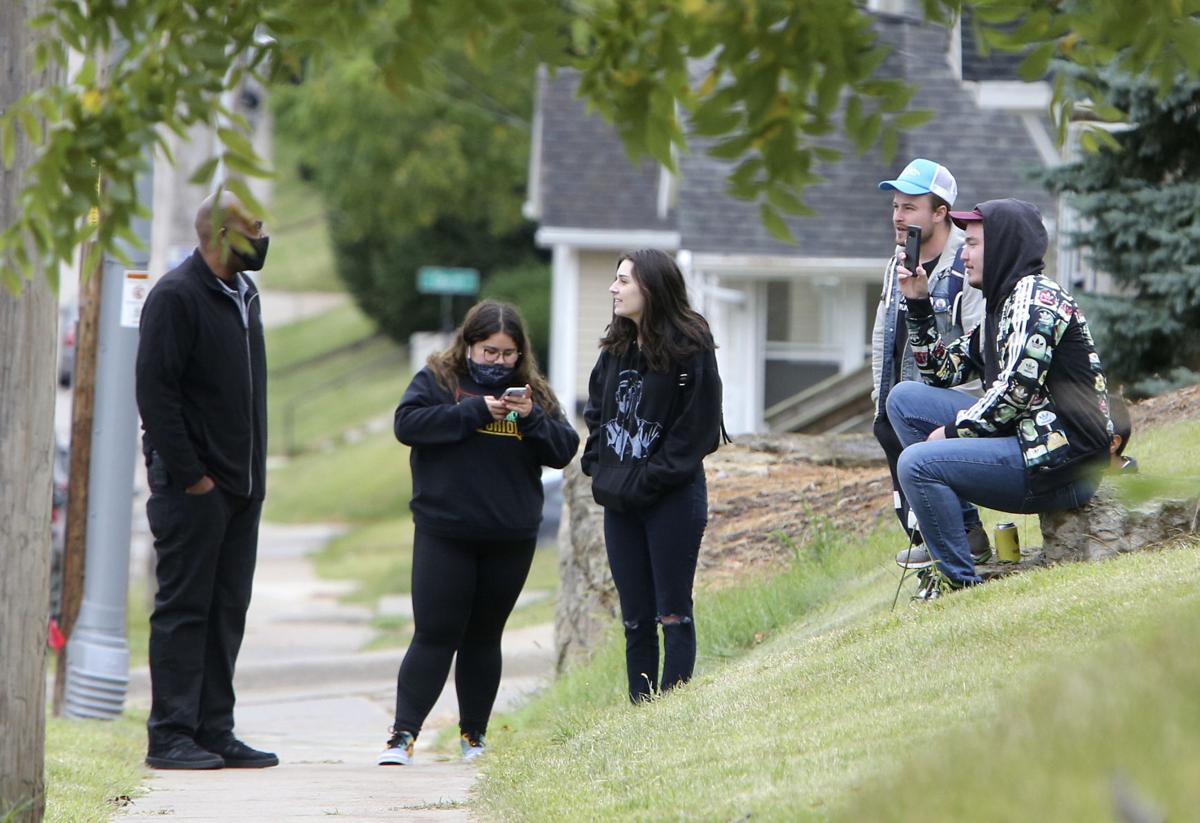 the statue of Bishop Mathias Loras on the campus of Loras College on Tuesday, Sept. 8, 2020. The school announced that the statue will be removed.

Workers remove the statue of Bishop Mathias Loras on the campus of Loras College on Tuesday. The school announced the move after learning new information about the school founder’s slave ownership.

The statue is loaded onto a truck before being taken to a storage location on campus.

The statue of Bishop Mathias Loras is placed on a truck before being taken to a storage location on the campus of Loras College on Tuesday. The school announced that the statue will be removed after school officials learned new information about Bishop Loras’ slave ownership.

the statue of Bishop Mathias Loras on the campus of Loras College on Tuesday, Sept. 8, 2020. The school announced that the statue will be removed.

The statue will be placed in storage until school officials can engage the alumni and campus community about the revelations regarding the bishop and "whether and in what context the statue could or should be displayed in the future," Loras President Jim Collins wrote in a letter to the campus community today.

Loras, the first bishop of Dubuque, in 1839 established the seminary that would eventually become the Dubuque college.

Collins said he was contacted in June by a researcher who was working on a project when he came upon the bishop's financial ledgers. The researcher confirmed that Loras purchased an enslaved woman named Marie Louise while he was living in Mobile, Ala.

Loras enslaved the woman from 1836 to 1852. He left her behind when he moved to Iowa but "hired her out to others and used proceeds from her labor to help build his various ministries" in Dubuque, Collins wrote in his letter.

"Doing a new, detailed analysis of historic documents and Bishop Loras’ unpublished personal financial ledgers, the researcher showed for the first time the extent of those transactions, leading to a new understanding of Bishop Loras’ participation in the system of slavery," Collins wrote.

He noted that previous biographers had established that Loras was a slave owner, but the new discovery challenges past depictions.

"I had a wide range of emotions — mostly that I was quite surprised by the largess of information that came about," Collins said in an interview of his reaction to the news. "But also as a longstanding staff member at the college and as a very proud alum, it was difficult to hear."

Collins said he informed college leaders of the new information and engaged a small group of diverse individuals over the summer. A member of Loras College's history faculty researched the information and confirmed the researcher's findings.

The college's Board of Regents met twice late last month, and at the later meeting, they decided to remove the statue of the bishop for the time being.

The statue was erected in 1939 and was visible to passersby outside of Keane Hall, along Loras Boulevard. Local folklore developed around the statue said the bishop's presence protects Dubuque from tornadoes.

Collins said the statue symbolically represented the bishop as a saint. However, having as an iconic symbol a man who both did good things but also enslaved someone doesn't align with the college's core values focused on human dignity, he said.

"To me, it contradicts what Catholic values and our mission and vision is all about," Collins said.

He said the statue is being removed and placed safely in storage while the campus and alumni community and board give their input on its future.

Collins doesn't expect that decision to be made quickly, however.

"We know that people will disagree with the decision, and lots of people will have different opinions about what should or shouldn't be done, but over some period of time, we will review and receive all of that information and have another conversation," Collins said.

He said the college's actions aim not to erase the school's history, nor do they aim to erase Bishop Loras' role in the school's founding, but to tell that history more fully. He also said politics has nothing to do with the decision, which instead was prompted by the school's Catholic identity.

"It's as simple as that, that we wanted to make sure that even though we made a tough decision and one that will be defined as unpopular by some, it's clearly in line with our Catholic identity, mission and values," he said.

Sergio Perez, Loras' college diversity officer and adviser to the president, likewise said the removal of the statue aims to bring clarity to the school's history.

“It doesn’t mean we’re going to stop talking about Bishop Loras ... but rather, we are teaching his full history — his good things but also his bad things,” Perez said.

The college's board also will create a scholarship fund in Marie Louise's name starting in the 2021-2022 school year and another scholarship fund in honor of Loras' first Black graduate and fifth Black priest to be ordained in the U.S., the Rev. Norman DuKette.

Perez said those actions show the college's commitment to its diversity, equity and inclusion efforts.

The Rev. Loras Otting, a former Archdiocese of Dubuque archivist who edited a book of letters written to Bishop Loras, said he was shocked by some of the information that college officials said they had learned.

Otting said his research indicated that Loras purchased a husband and wife as slaves when he lived in Alabama but left them in the care of a friend when he came to the Midwest. Loras asked the friend to take good care of the couple.

"I'm just surprised, stunned at this information," Otting said. "If it's accurate and true, then I have to accept it, but it’s not a picture of Bishop Loras that I was ever aware of."

However, he said that given current national discussions around racism and the legacy of slavery, and the potential controversy that leaving the statue up could cause at this point, he felt it would be best to remove it for now.

"It's best to ... remove it for the time being until we can see what happens in the future, what develops," Otting said.

Samantha Watts, a Loras junior who is president of the school's Black Student Union, said learning the new information about Bishop Loras was a lot to take in, but she appreciated school officials taking the initiative to address it.

"I would like to see Loras (College) just remaining committed to having these conversations and having these open dialogues, even outside the Loras statue," she said.