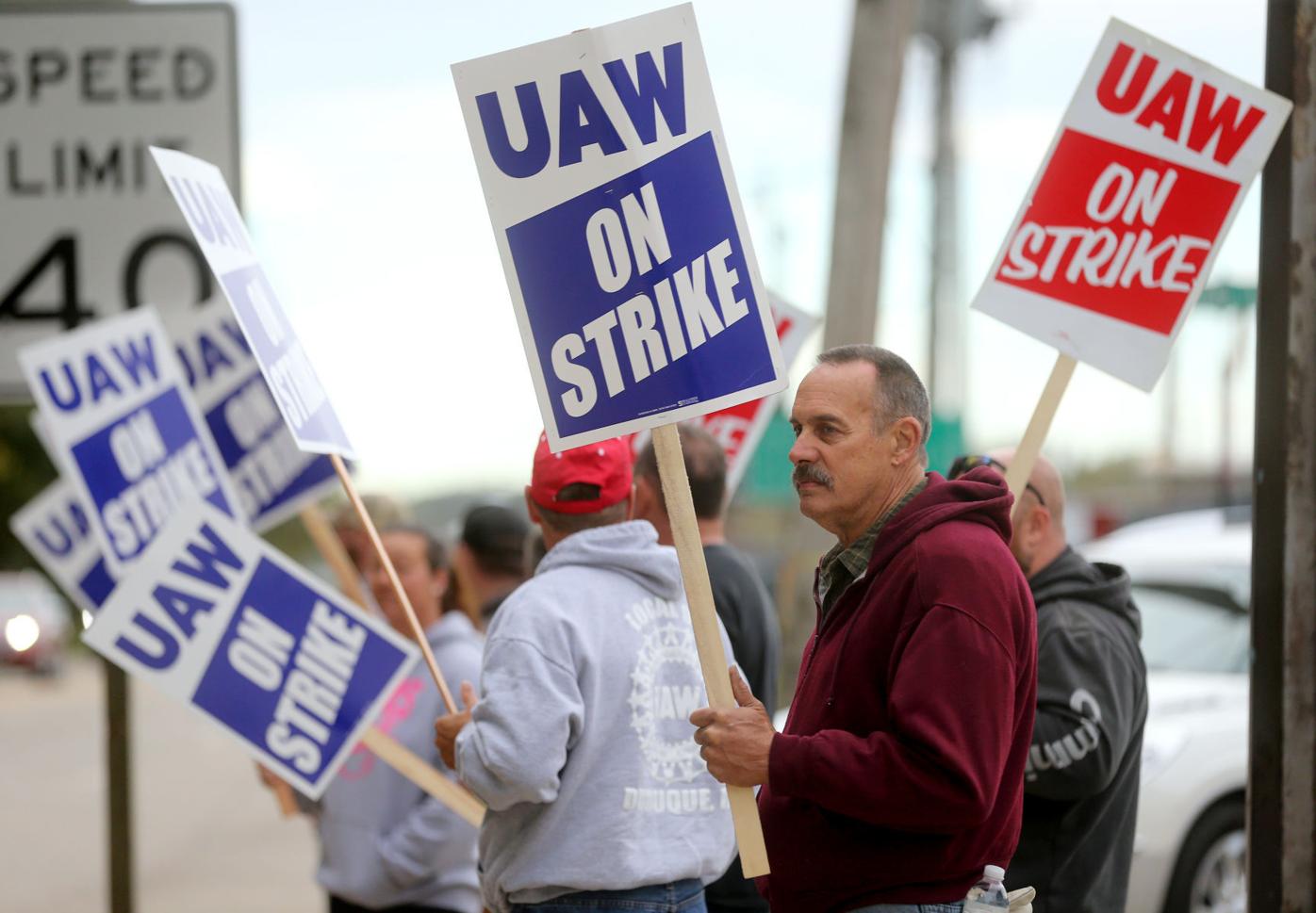 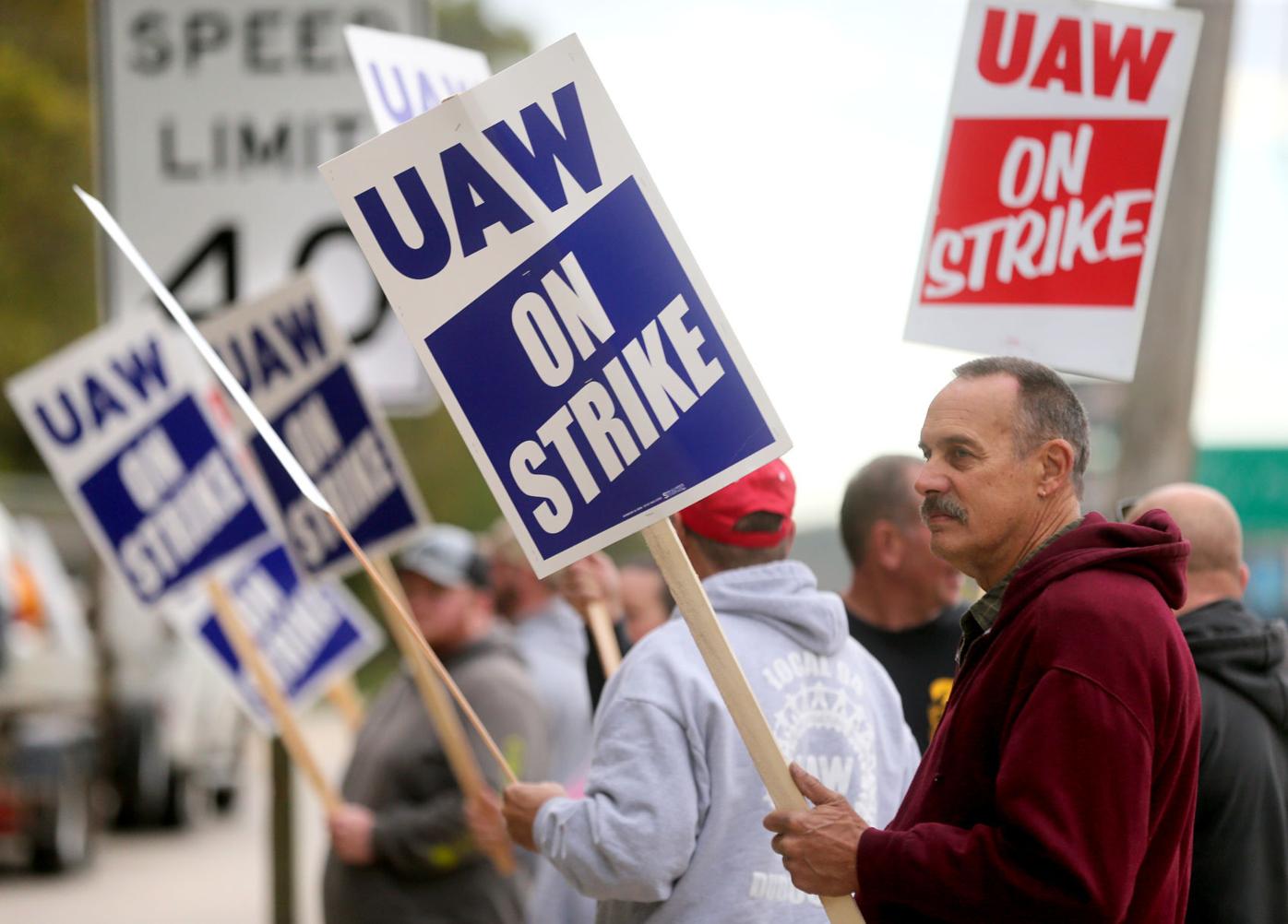 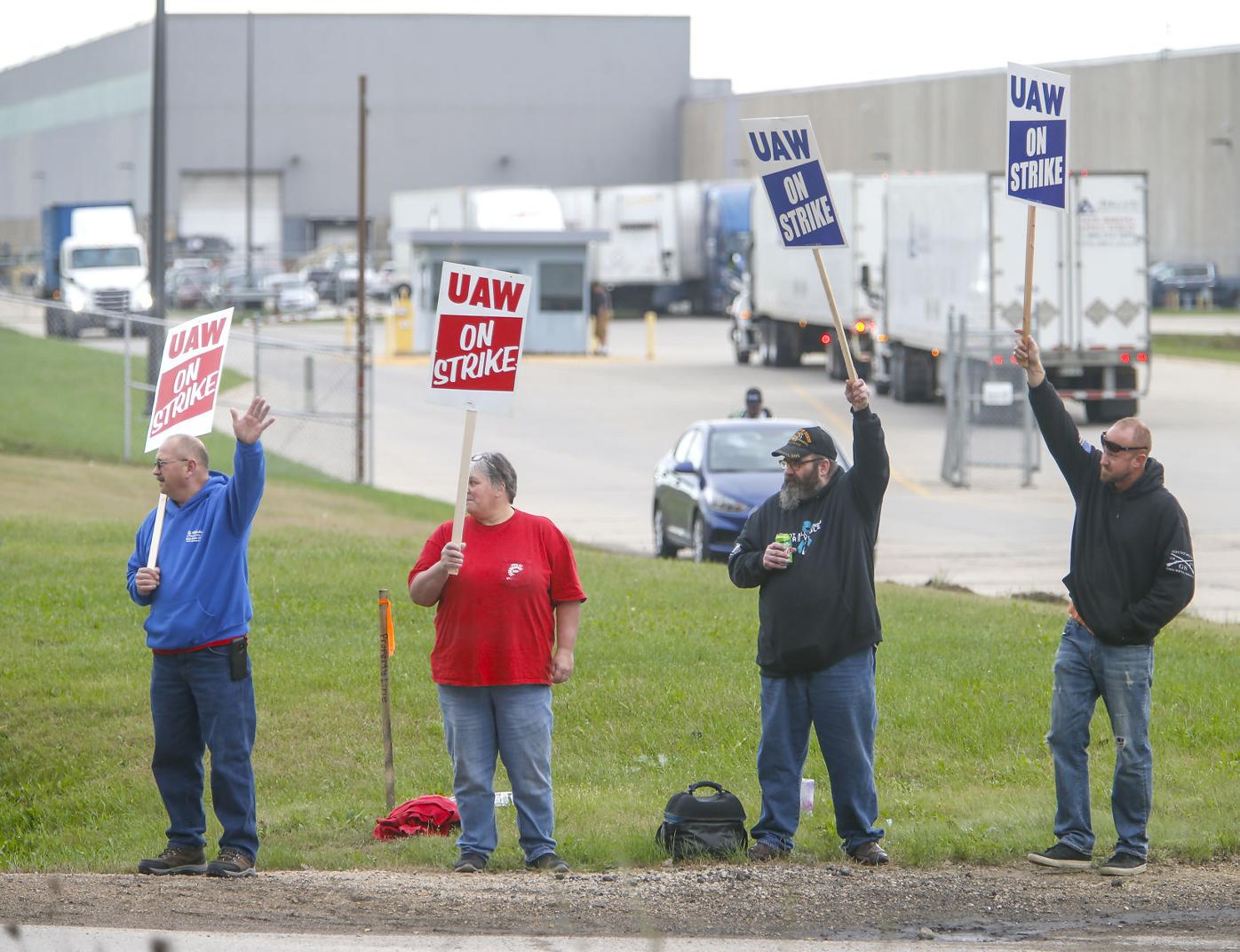 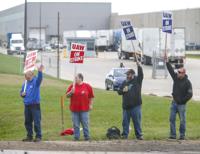 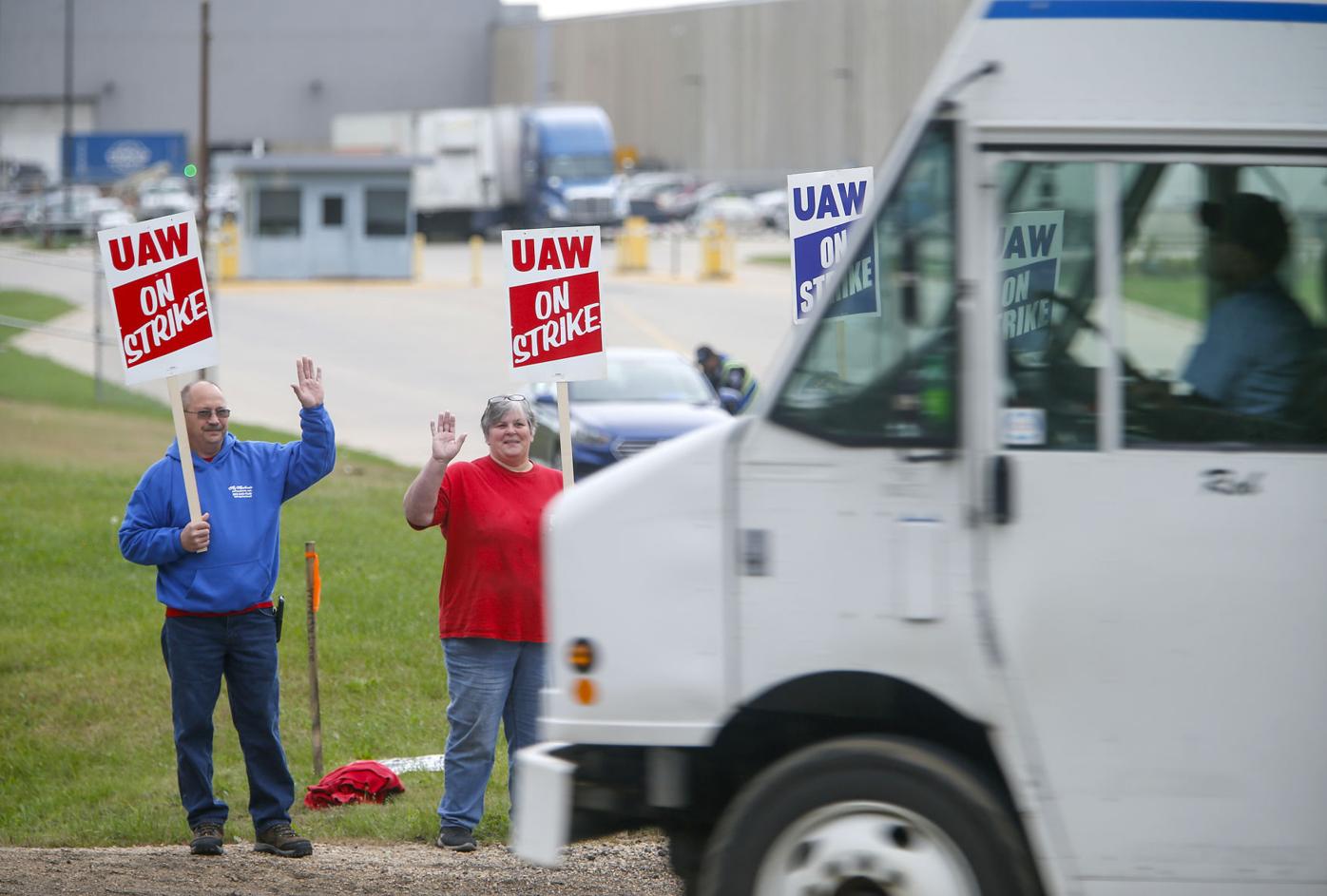 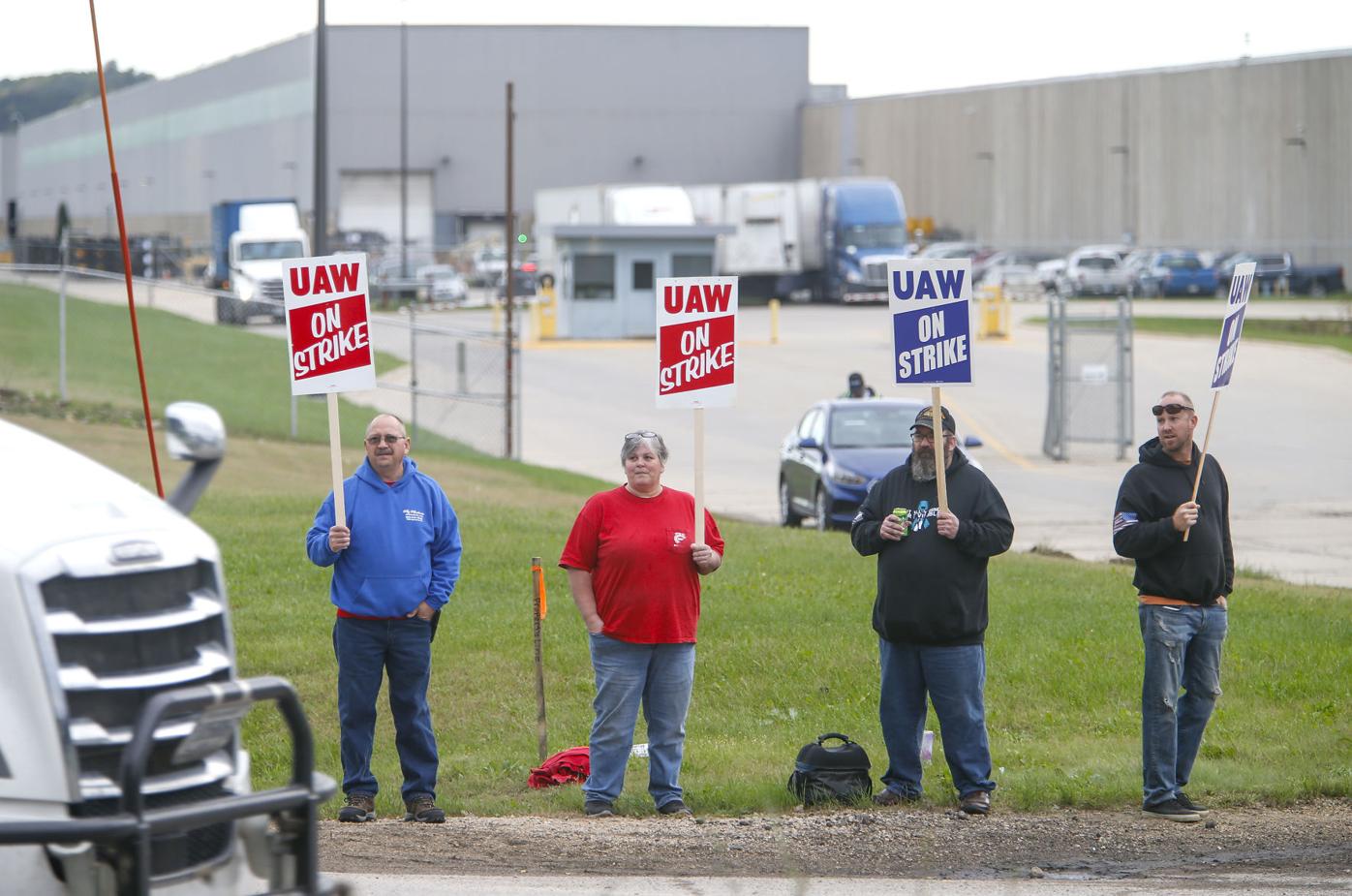 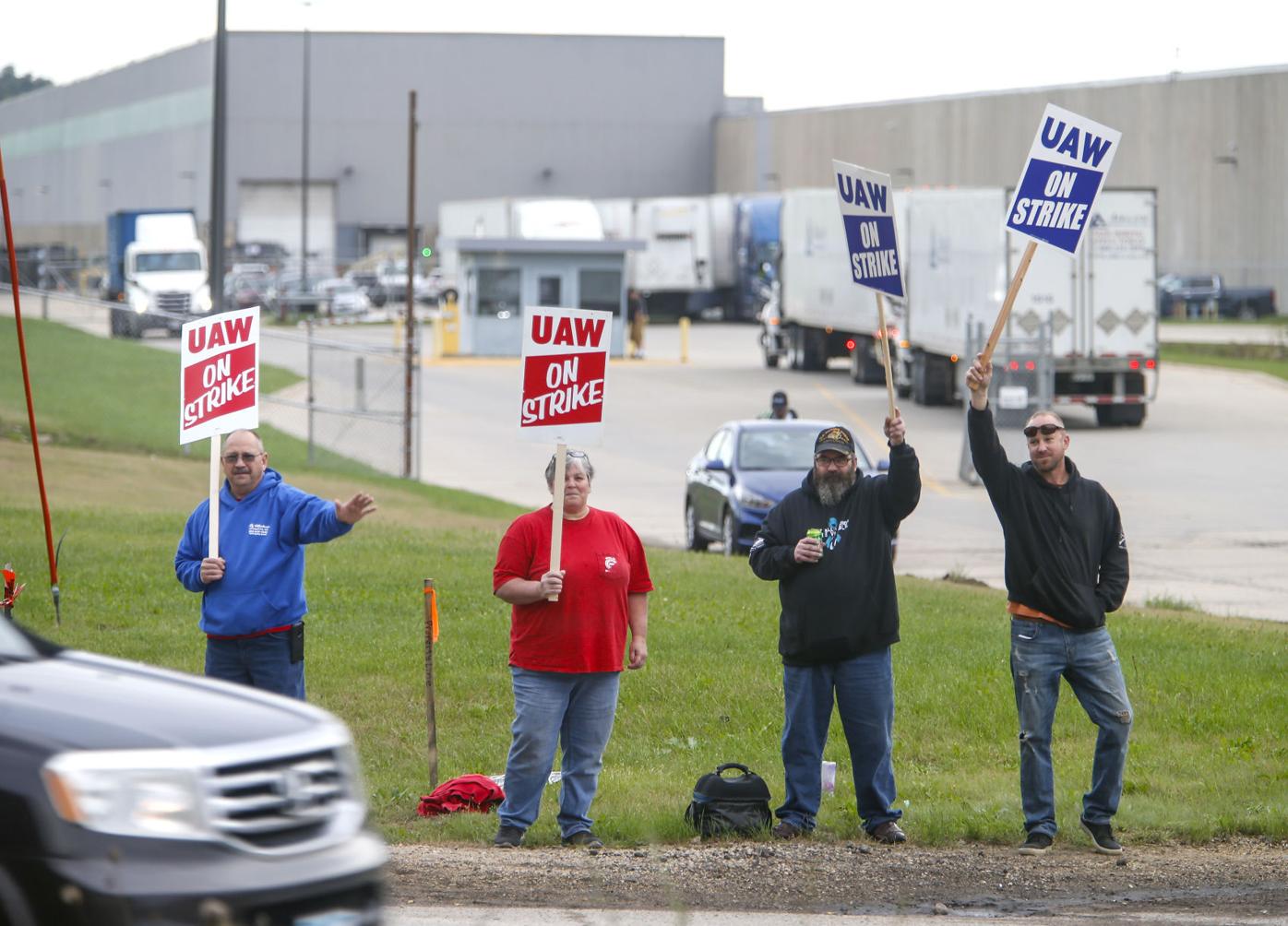 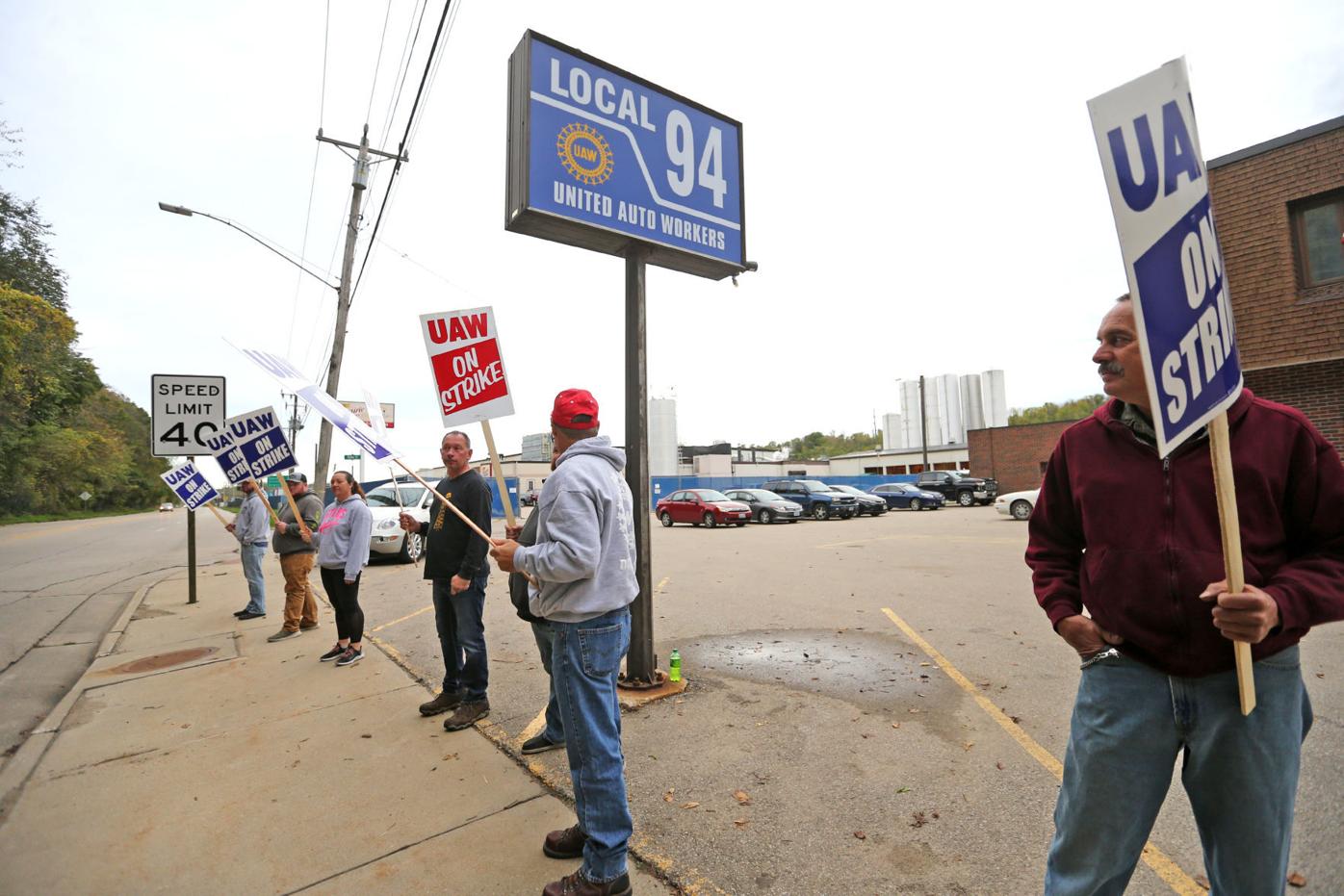 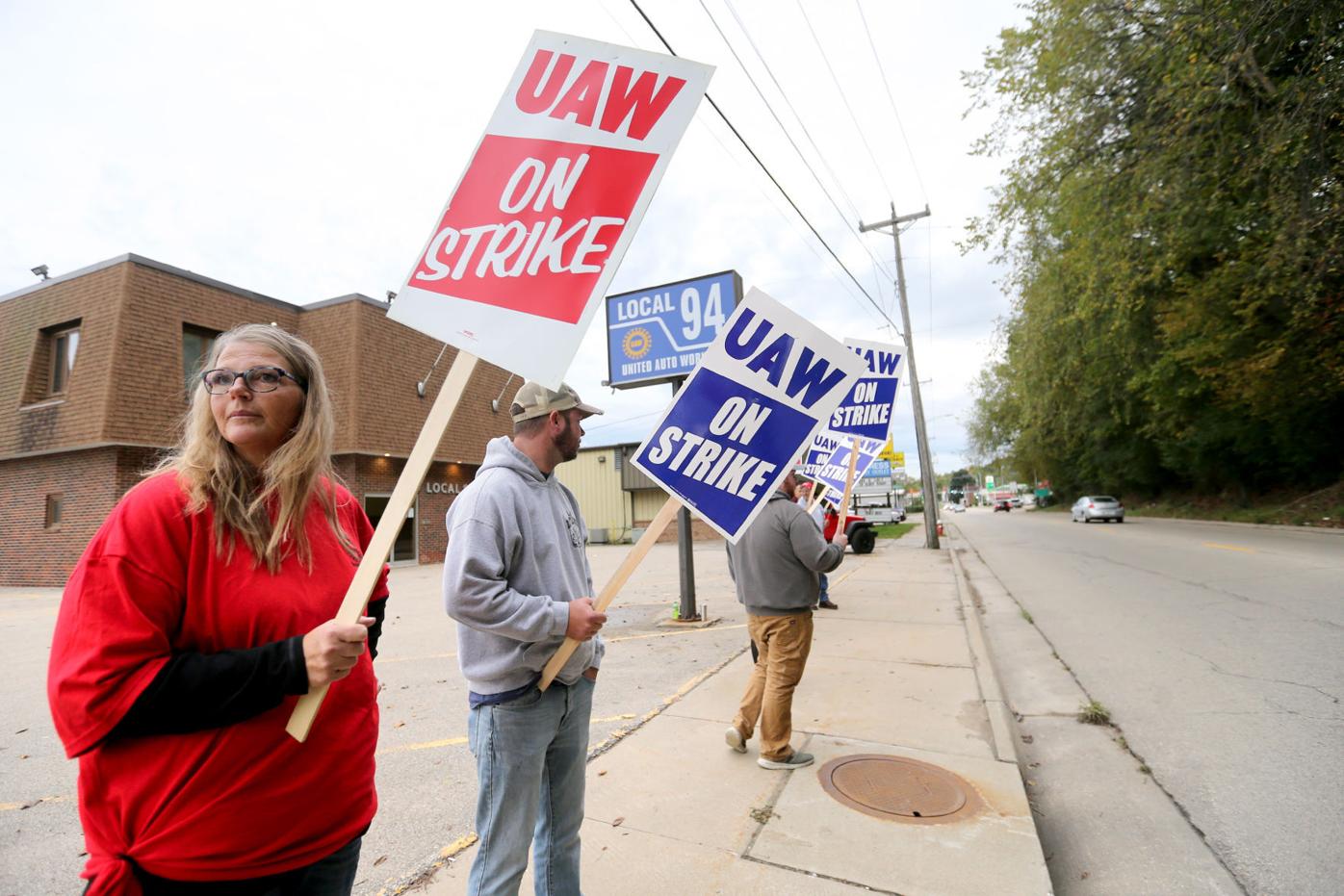 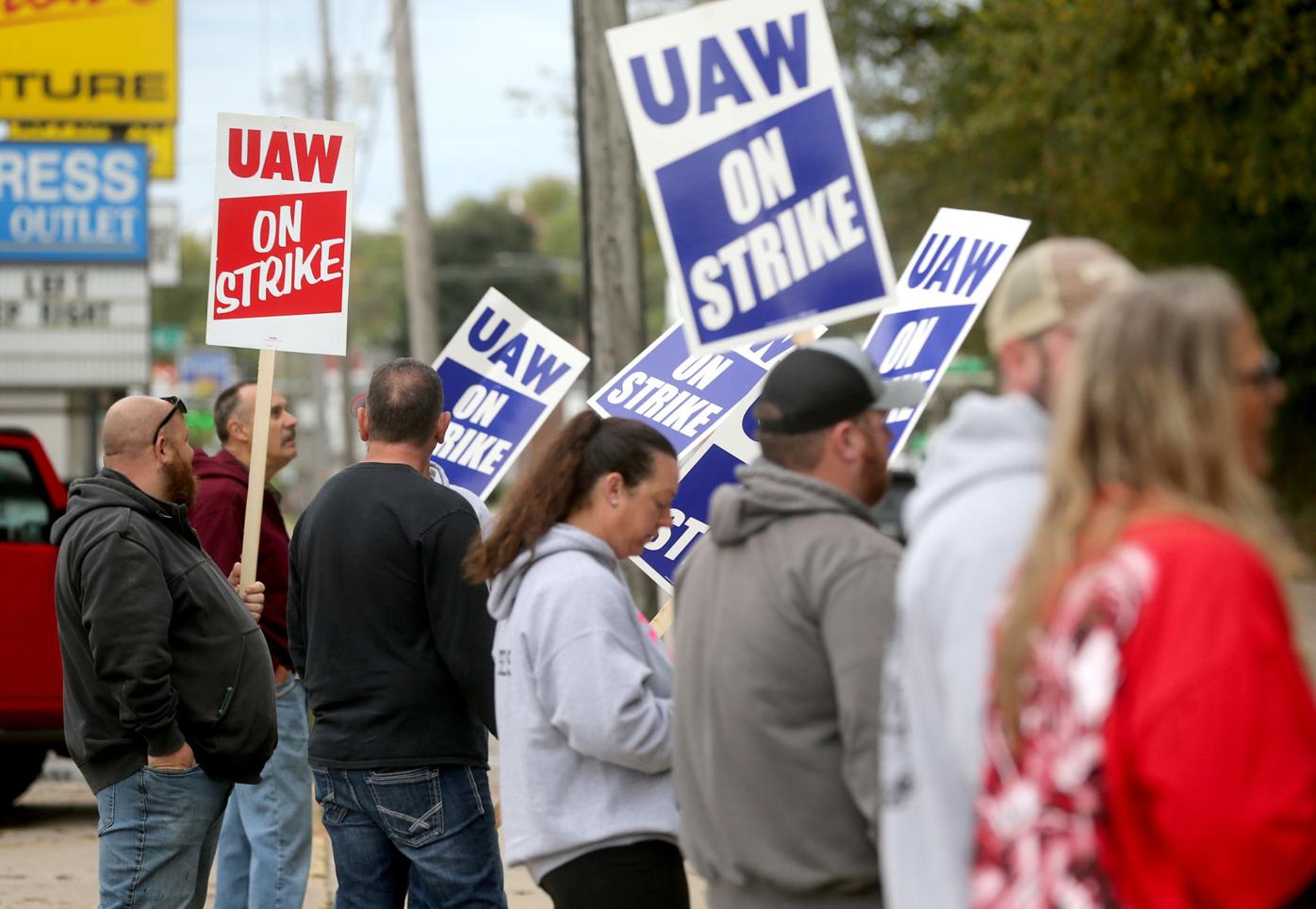 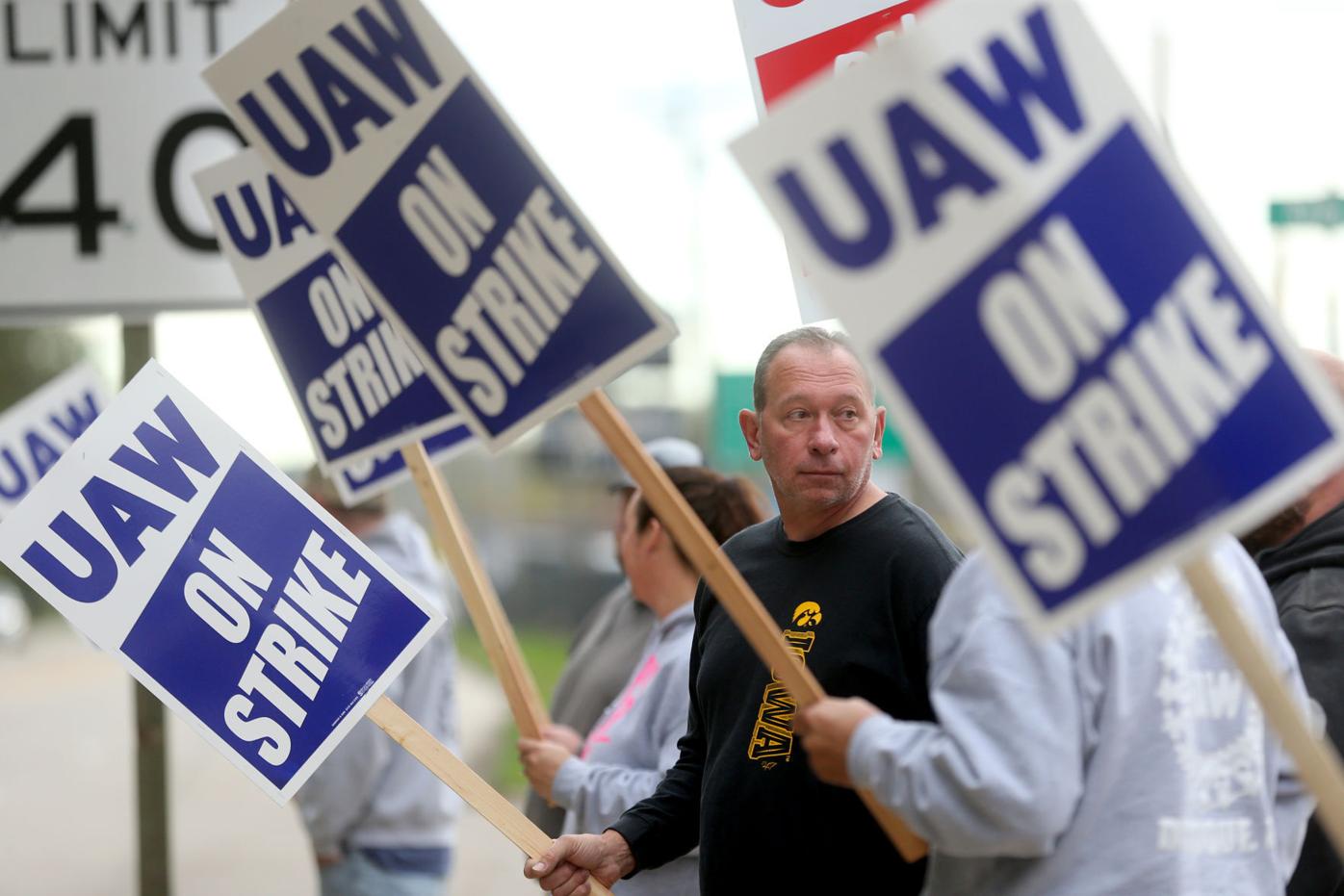 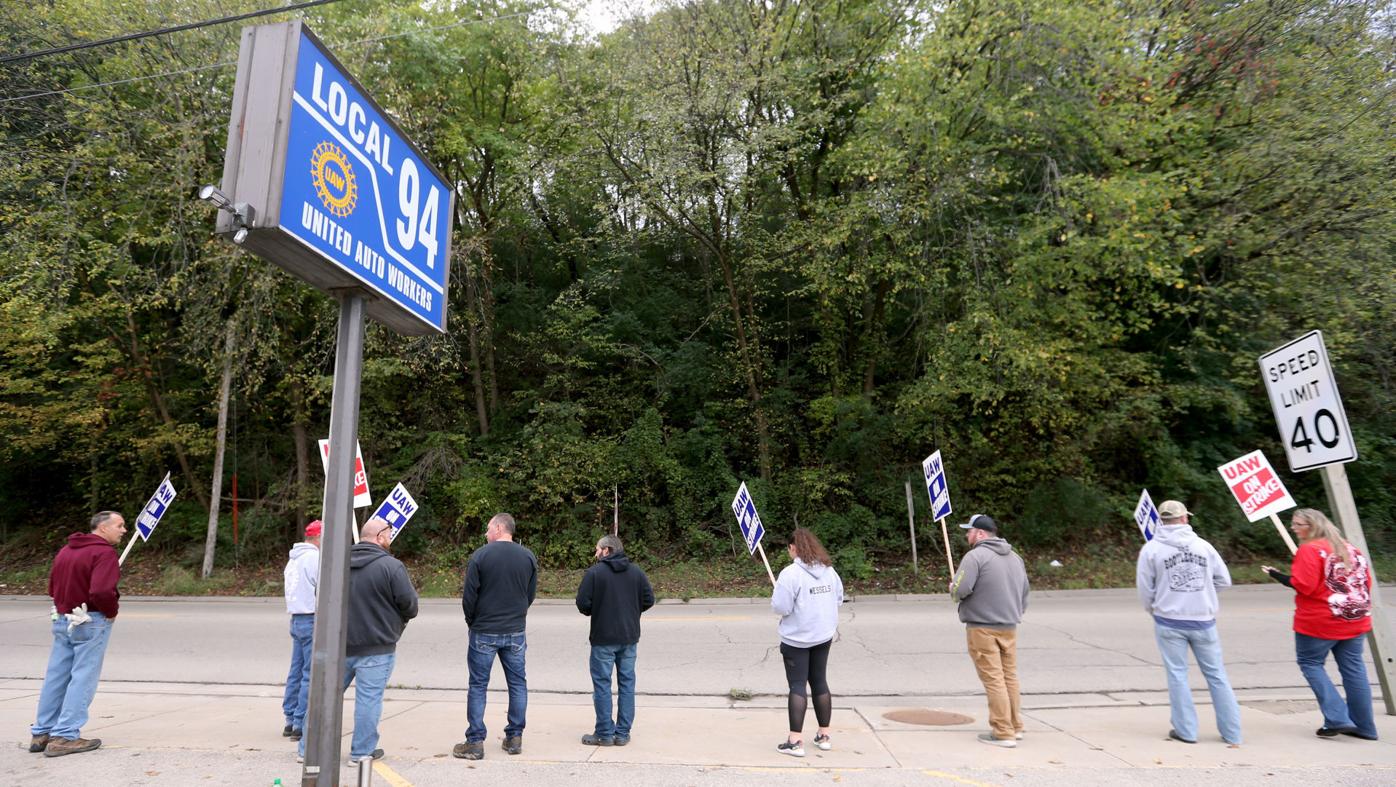 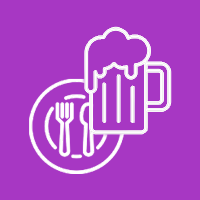 Mark Lyons, an assembler at Dubuque Works, said he woke up at 4 a.m. so he could “join his brothers and sisters on the line” as early as possible. He was part of a group gathered outside the south entrance to the Dubuque Works plant.

Lyons emphasized that many union members believe this strike could have ripple effects that last for decades.

“We are looking for better working conditions and better benefits for ourselves and for future generations,” he said. “It’s not just about us. It is also for the workers of the future.”

John Deere Dubuque Works employs 2,800 workers — making it Dubuque County’s largest employer — although not all of them are union members.

The contract between UAW and Deere covers more than 10,000 production and maintenance workers at about a dozen facilities, including plants in Iowa, Illinois, Kansas, Colorado and Georgia.

The union’s previous six-year contract was originally set to expire on Oct. 1. UAW and Deere reached a tentative agreement on the first day of October, but the proposal was rejected by 90% of UAW members on Sunday. A final strike deadline of 11:59 p.m. Wednesday came and went without a new agreement, resulting in the first major strike staged by John Deere workers since 1986.

Steve Thor has worked at Dubuque Works for four years, focusing on machine maintenance. He started his shift on the picket line at 8 a.m. Thursday, setting up camp outside the labor hall.

Many passing motorists sounded their horns in a demonstration of support, bringing a smile to Thor’s face.

“It is encouraging to hear the honking,” he said. “It is nice to feel that support.”

Thor believes the strike was justified, noting that Deere has reported strong earnings in recent years and arguing that the success should trickle down to the factory workers.

Thor acknowledged that there could be a long road ahead.

“I think it could take a while to get this hammered out,” he said. “We’ll just have to wait and see what happens.”

He noted that many union members were preparing for the strike for months.

“We’ve tried to plan ahead and build a little (financial) cushion, so you have enough to get by,” he said. “The bills don’t stop.”

Nelson said the strike seemed like a foregone conclusion after Sunday’s vote. He said that offer didn’t sit well with workers who have toughed out the COVID-19 pandemic over the last couple years.

“We were deemed essential workers during the pandemic,” he said. “It didn’t seem like the contract they offered us in bargaining treated us like we are essential.”

Deere & Co. said Thursday that the affected plants are not shut down. In a statement, the company indicated that “employees and others will be entering our factories daily to keep our operations running” but provided no further details on these plans. Deere & Co. Director of Public Relations Jen Hartmann told the Telegraph Herald that she could not provide more specifics on the initiative.

UAW spokesman Brian Rothenberg did not return a call placed by the TH on Thursday.

“Any community would be blessed to have John Deere Construction and Forestry and the talent of UAW Local 94 as a part of their corporate family,” he said.

Dickinson noted that Deere employs 5% of the total workforce in the county. Additionally, many local businesses supply parts and materials to Deere or otherwise serve the plant, potentially creating what Dickinson called an economic “ripple effect.”

Dickinson declined to comment on the specifics of ongoing negotiations but expressed his wish for a swift conclusion.

“I am hoping for expeditious and successful negotiations between all parties,” he said.

Economic experts believe recent economic shifts could alter the trajectory of these talks.

Loren Rice, an associate professor of accounting and business at Clarke University in Dubuque, noted that unions generally have been losing leverage in negotiations over the course of the past quarter-century. This is due largely to the fact that workers have more to lose.

“Typically, the owners have huge advantages,” he said. “During a strike, the business is only losing profit. The workers are losing their paycheck.”

But Rice said this dynamic has been turned upside down in recent years, due largely to the worsening workforce shortage facing employers. As a result, business owners might perceive a strike differently.

“There are not any workers to take their place,” Rice said. “For the first time in several decades, the union has a real advantage.”

Iowa State University economist Dave Swenson said its strong earnings give Deere the means to come to terms with workers.

“They can afford to settle this thing on much more agreeable terms to the union and still maintain really strong profitability,” he said.

Swenson said the impact of the strike could spread further if companies that supply Deere factories have to begin laying off workers. So, Deere will face pressure from suppliers and from customers who need parts for their Deere equipment to settle the strike quickly. And Swenson said Deere will be worried about losing market share if farmers decide to buy from other companies this fall.

“There is going to be a lot of pressure on Deere to move closer to the union’s demands,” Swenson said.

As the strike deadline approached, local union members were angry at both the company and the union leadership. A union steward from John Deere Dubuque Works told the TH that local members were “angry with the UAW International for even considering” Deere’s initial offer.

Only 10% of union members voted to accept that deal.

According to Deere officials on Thursday, the typical production employee’s all-in annual wages — a figure that also factors in components like overtime and profit sharing — would have increased from $60,000 today to $72,000 by the end of the proposed six-year agreement. This equates to an hourly increase from about $33 per hour to nearly $40 per hour, the company said.

However, multiple local Dubuque Works union members said those wage ranges are much higher than what they make, and they disputed the figures being shared by the company.

In a statement sent to the TH on Thursday, Deere officials reiterated that the company is “committed to reach an agreement with the UAW that would put every employee in a better economic position and continue to make them the highest paid employees in the agriculture and construction industries.”

In the meantime, Deere is troubleshooting new ways to stay afloat.

The company announced the activation of its Customer Service Continuation Plan, an initiative that aims to find short-term solutions to production needs at a time when union members are on strike.

“Our immediate concern is meeting the needs of our customers, who work in time-sensitive and critical industries such as agriculture and construction,” the statement reads. “By supporting our customers, the CSC Plan also protects the livelihoods of others who rely on us, including employees, dealers, suppliers and communities.”

John Deere Dubuque Works union employees are among more than 10,000 Deere & Co. workers who are now on strike after negotiators couldn’t deliver a new agreement by the end of Wednesday.

The United Auto Workers union said its members would walk off the job if no deal had been reached by 11:59 p.m. Minutes before that deadline hit, social media accounts for some of the union locals involved announced the strike, and even more followed suit at midnight.

UAW also issued a statement confirming the strike, saying Deere failed to “present an agreement that met our members’ demands and needs.”

“Our members at John Deere strike for the ability to earn a decent living, retire with dignity and establish fair work rules,” said Chuck Browning, vice president and director of the UAW’s Agricultural Implement Department, in a press release. “We stay committed to bargaining until our members’ goals are achieved.”

The striking workers are setting up pickets

“Our members and their families appreciate the community support they have already gotten,” said Ron McInroy, director of UAW Region 4, in the release. “Strikes are not easy, but some things are worth fighting for.”

On Wednesday night, the Dubuque UAW had issued a mass text to many of its local members instructing them to meet at the UAW hall at midnight.

Information about this message was shared ahead of the strike deadline by a union steward who has worked at John Deere Dubuque Works for more than a decade. He spoke to the TH on the condition of anonymity.

He interpreted the text as a surefire indication that the waning hours of the evening would not yield a new agreement.

“At this point, we are pretty certain there will not be an agreement,” the union member said ahead of the strike deadline. “This was the UAW’s way of letting members know you won’t be going into work and you need to be ready to carry out your strike duties.”

The union steward said those who received the mass text — and who planned to report to the UAW hall at midnight — would represent the first “strike shift” on behalf of the union.

Meanwhile, on Wednesday night, Deere & Co. submitted an ad to the TH to run in today’s print edition that referenced the strike.

It reads in part, “Our goal is straightforward: We want to reach an agreement with the UAW that puts every employee in a better economic position. We are listening to our employees’ priorities and will continue talks until the strike is resolved.”

About 90% of union members on Sunday rejected a contract offer that would have delivered 5% raises to some workers and 6% raises to others.

The contract between UAW and Deere covers more than 10,000 production and maintenance workers at about a dozen facilities, including Dubuque Works and plants in Iowa, Illinois, Kansas, Colorado and Georgia.

There are 2,800 full-time employees at Dubuque Works, although not all of them are union members.

Thirty-five years have passed since the last major Deere strike, but workers are emboldened to demand more this year after working long hours throughout the pandemic and because companies are facing worker shortages.

Chris Laursen, who works as a painter at Deere, said earlier this week that he thought a strike was imminent and could make a significant difference.

“The whole nation’s going to be watching us,” Laursen said. “If we take a stand here for ourselves, our families, for basic human prosperity, it’s going to make a difference for the whole manufacturing industry. Let’s do it. Let’s not be intimidated.”

The construction and forestry division, which includes John Deere Dubuque Works, has reported net sales of $3 billion and operating profit of $463 million in the third quarter of fiscal year 2021. Sales in the division are up 38% and profit is up 126% compared to the same stretch last year.

The Telegraph Herald would like to speak with local residents impacted in any way by the strike. That includes union members, employees still working at the Dubuque plant, people involved with related businesses and anyone else impacted.

If you are interested in speaking with a reporter, please email jeff.montgomery@thmedia.com or dustin.kass@thmedia.com.

A story about a union strike at John Deere Dubuque Works and other Deere & Co. facilities was the most-read story on TelegraphHerald.com t…