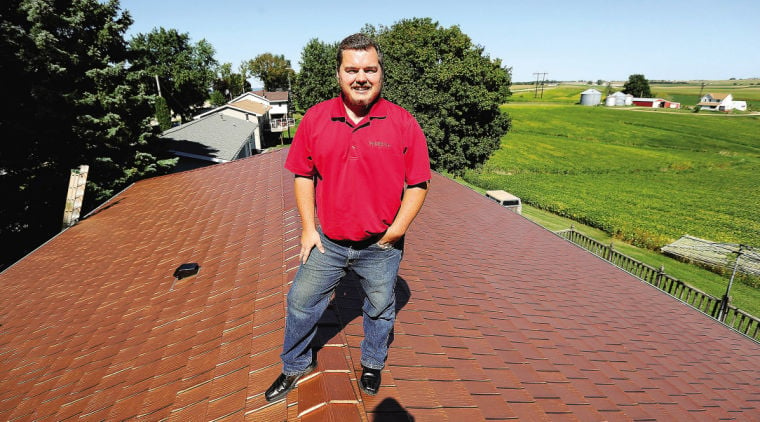 Jamison Nienke, of Roofco Residential Roofing in Dubuque, says more people are asking for metal roofing instead of asphalt shingles. However, asphalt can be a viable choice in many situations. 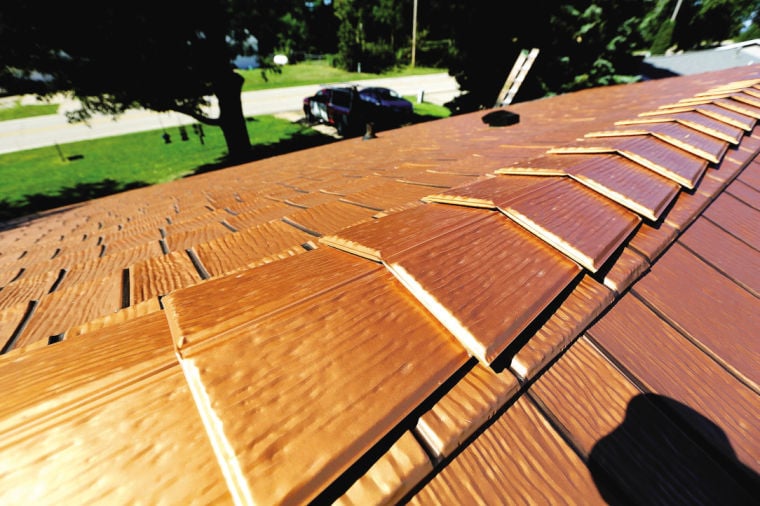 Metal roofing comes in a variety of colors, such as copper.

Jamison Nienke, of Roofco Residential Roofing in Dubuque, says more people are asking for metal roofing instead of asphalt shingles. However, asphalt can be a viable choice in many situations.

Metal roofing comes in a variety of colors, such as copper.

Metal roofs are no longer for warehouses only.

More residential customers are having some form of metal roofing installed on their homes, with the perceived advantages of metal roofing systems being longer lasting and stronger than traditional asphalt shingles.

"A lot of people just feel the reason they go to a metal is they have a (shingle) roof and the shingles went bad in seven to 15 years and they're a little frustrated, so they're switching because they just don't want to deal with that again," said Matt McCarthy, owner of McCarthy Roofing in Epworth, Iowa, which provides asphalt and metal roofing products.

Roofing contractors say there is much to consider when a residential customer is weighing asphalt vs. metal roofing, and asphalt shingles remain a valid choice.

But the number of residential customers using some form of metal roofing is growing. In the past 15 years, metal roofing's market share in re-roofing projects has tripled from 4 percent to 12 percent, according to a recent McGraw-Hill Construction and Analytics survey.

Local roofers are seeing the trend.

"We're getting more and more calls for metal alternatives," said Richard Nienke, of Roofco Residential Roofing in Dubuque. "Basically people are getting tired of having to replace their roofs, deal with shingles going bad."

The allure of metal roofing systems is their longevity and their durability. Proponents say metal roofs also have environmental benefits, can reduce heating and cooling costs and might lower the homeowner's insurance rates.

"I've talked to people who told me they've saved 30 percent on their home insurance," said Jamison Nienke, of Roofco.

For people who choose metal roofs, those benefits outweigh the costs: metal roofs can be double or triple the cost of using asphalt shingles, although proponents say that cost is negated in the long run.

While a metal roof can cost twice as much in the first year, it can ultimately cost roughly a third of asphalt shingle roofs during the course of 60 years, according to the Metal Roofing Alliance.

That's why, Jamison Nienke said, many consumers choose their roof material based on how long they want it to last. If consumers are in a home they don't plan on living in long term, they might be more apt to choose a shingle roof; if they plan on staying in the home for decades or keeping the home in the family, they might be more apt to choose metal.

Metal roofs come in a variety of products, from large panels more familiar to commercial buildings to pieces that are designed to look like asphalt shingles.

Jamison Nienke said each product has its particular strength, and consumers simply choose the one they like best.

"Everybody has their own turning point. Some people want a long paint warranty, some people want something that is going to come with long transferability," he said.

Despite the metal roofing industry's growth and the products' advantages, asphalt shingles remain a viable option.

In fact, McCarthy said he believes metal roofs are no better than a quality asphalt shingle.

"I know there's quite a few people going with (metal). I wouldn't say it's a hot trend," McCarthy said. He said on new construction products, his consumers almost exclusively use asphalt shingles.

McCarthy said that while metal roofs proclaim to last longer, a quality shingle with a good warranty can provide just as much financial security. He said both materials have their pros and cons.

McCarthy said metal roofs are prone to sun wear and hail damage, repairs can be difficult depending on the product, and while many are not flammable, firefighters don't like them because they are difficult to breach.

"I don't feel there's more advantage of a metal roof over a shingle roof," McCarthy said.

Jamison Nienke, on the other hand, believes that once metal's costs fall in line with asphalt shingles, the latter will become obsolete.

"(Metal) is the roofing of tomorrow," he said. "It's a matter of time before asphalt reaches the price that people just don't pay for it anymore."