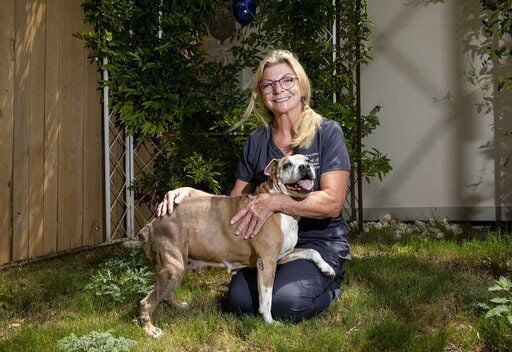 Rhonda Minardi rescued Gracie from a shelter in Corpus Christi, Texas, earlier this year. Gracie is between 12 and 14 years old, is blind and hard of hearing but gets around fairly quickly, despite having a bullet in a foot. 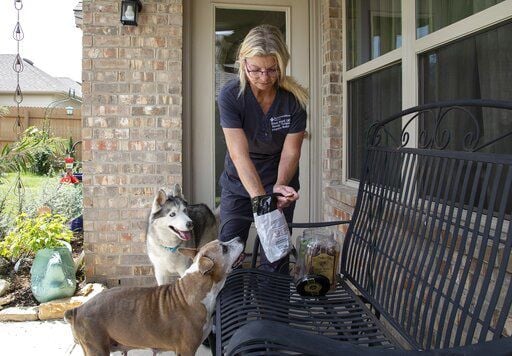 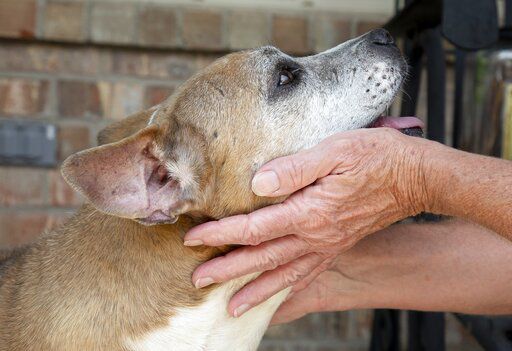 Minardi saw a photograph of Gracie online but didn’t realize the extent of her injuries until picking her up and knew she had to adopt her.

Rhonda Minardi rescued Gracie from a shelter in Corpus Christi, Texas, earlier this year. Gracie is between 12 and 14 years old, is blind and hard of hearing but gets around fairly quickly, despite having a bullet in a foot.

Minardi saw a photograph of Gracie online but didn’t realize the extent of her injuries until picking her up and knew she had to adopt her.

GEORGETOWN, Texas — Rhonda Minardi wondered why she was working so hard. The 54-year-old Georgetown massage therapist had three jobs, including working at a local hospital.

She had her epiphany in December, when she picked up her husky, Blaze, from a dog day care. She saw a Christmas tree that featured names of dogs at the Williamson County Animal Shelter that needed items, like blankets.

She ended up buying items for 20 of the dogs and realized they were all seniors, she told the Austin American-Statesman.

She didn’t like the idea of the dogs spending what was left of their lives in a shelter, Minardi said. That’s when she decided to buy land and build a place where senior dogs could have a “forever” home, she said.

Minardi bought 4.5 acres of land in Bertram in Burnet County in January and broke ground for her project called Living Grace Canine Ranch on June 20.

“It made sense why I was working so hard, because I needed the money to buy that land,” she said. She also was working as a massage therapist at a spa in Austin and for two chiropractors in Georgetown.

“Many of them have never known what love was, or had love and lost it when their owners died, or had to leave them behind,” she said of the dogs.

The first building she has planned will house 16 to 22 senior dogs, who will each have a room with a bed and a doggy door leading to a patio outside. They also will be walked every day and will have an inside play area, she said. Minardi also plans to play music for the dogs in their rooms with calm tones to help relax them.

“This is not a kennel or a shelter,” she said. “This is about love and being with people and other animals.”

A caretaker will live with the dogs in an apartment in the building, she said. Minardi said she hopes to have the 2,280-square-foot building erected by October and will ask for volunteers to help her design the inside of it.

She doesn’t have the money for all of the project, so she is paying for it as she goes and hopes to get donations through a nonprofit, livinggrace

canineranch.org, she started for the sanctuary.

“I believe the Lord provides and he’s been providing this whole time and leading me in these directions,” Minardi said.

Minardi said she hopes to build a second building that can house 30 to 36 older canines.

She gets inspiration for the canine ranch from Gracie, a 12- to 14-year-old abused female pit bull mix she rescued from a shelter in Corpus Christi in March.

When Minardi first saw the dog at the shelter, Gracie was sitting in her urine on a concrete slab and then limped toward her.

“I started crying because I’d never seen anything like it,” Minardi said.

Minardi said she later learned the dog is mostly deaf and blind from having neglected infections, has a prolapsed uterus from having too many puppies, has a bullet in one of her feet and suffers from heartworms, a torn tendon, a collapsed trachea and mange.

She also discovered Gracie, who now lives with her, had 100 dog bite marks on her head.

Gracie is not strong enough to have surgery for many of her ailments but is getting treatment for heartworms, has a brace for her leg and is on pain management medicine, Minardi said.

Her fur is growing back and she seems to have regained a little bit of her hearing from having her ear infections treated.

“She is full of love,” Minardi said. ”When I come home, she runs to me and sticks her head into my chest like she is trying to hug me.”

Gracie will not be living at the sanctuary because she is not strong enough, Minardi said. But the dogs that will live there will never have to leave, she said.

“Once they come to Living Grace, they have already been traumatized and I’m not moving them again.”