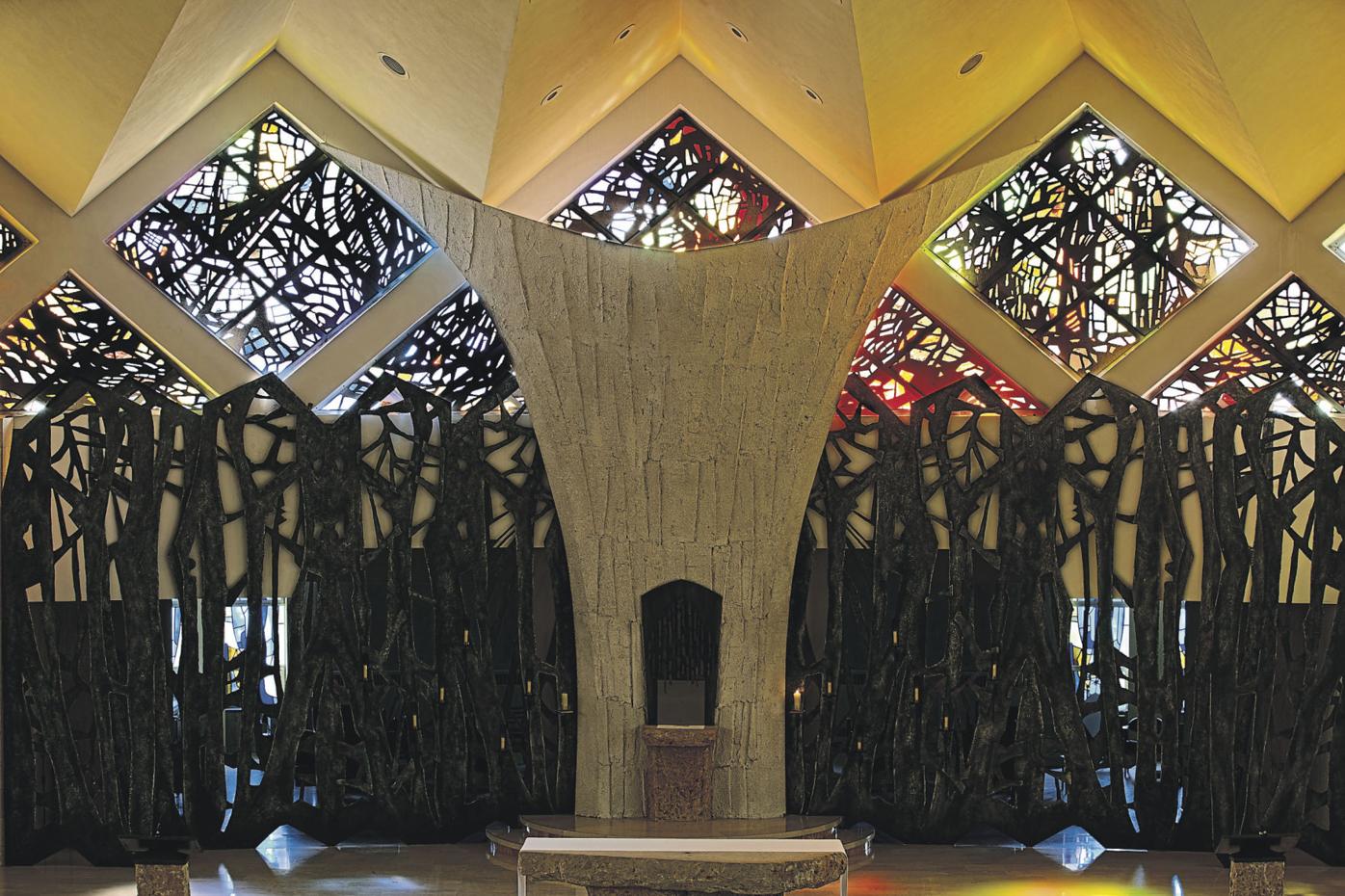 Queen of the Rosary Chapel opened in 1966 after a five-year designing project. 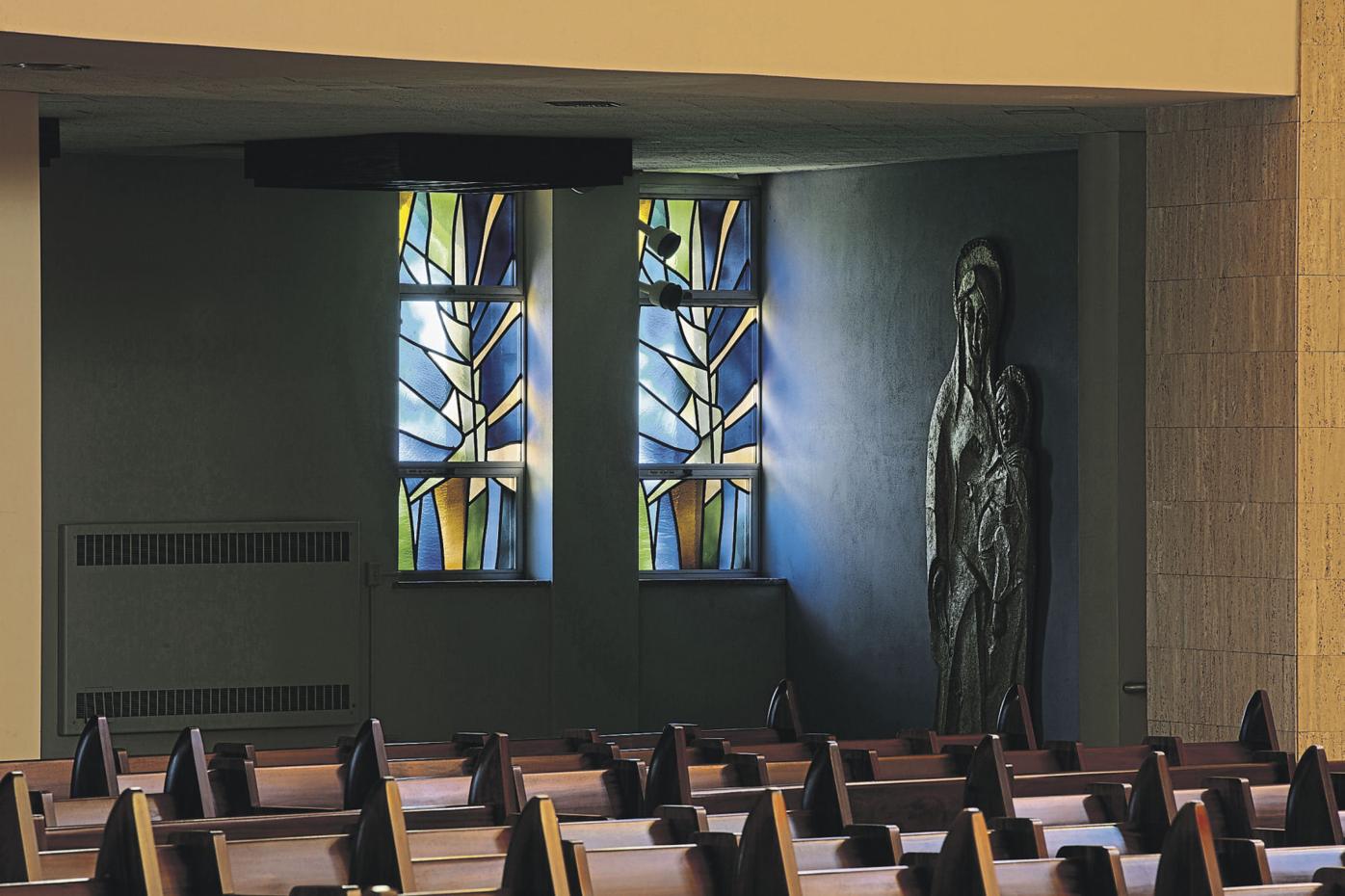 A section of stained glass windows of Queen of the Rosary Chapel at Dominican Sisters of Sinsinawa. 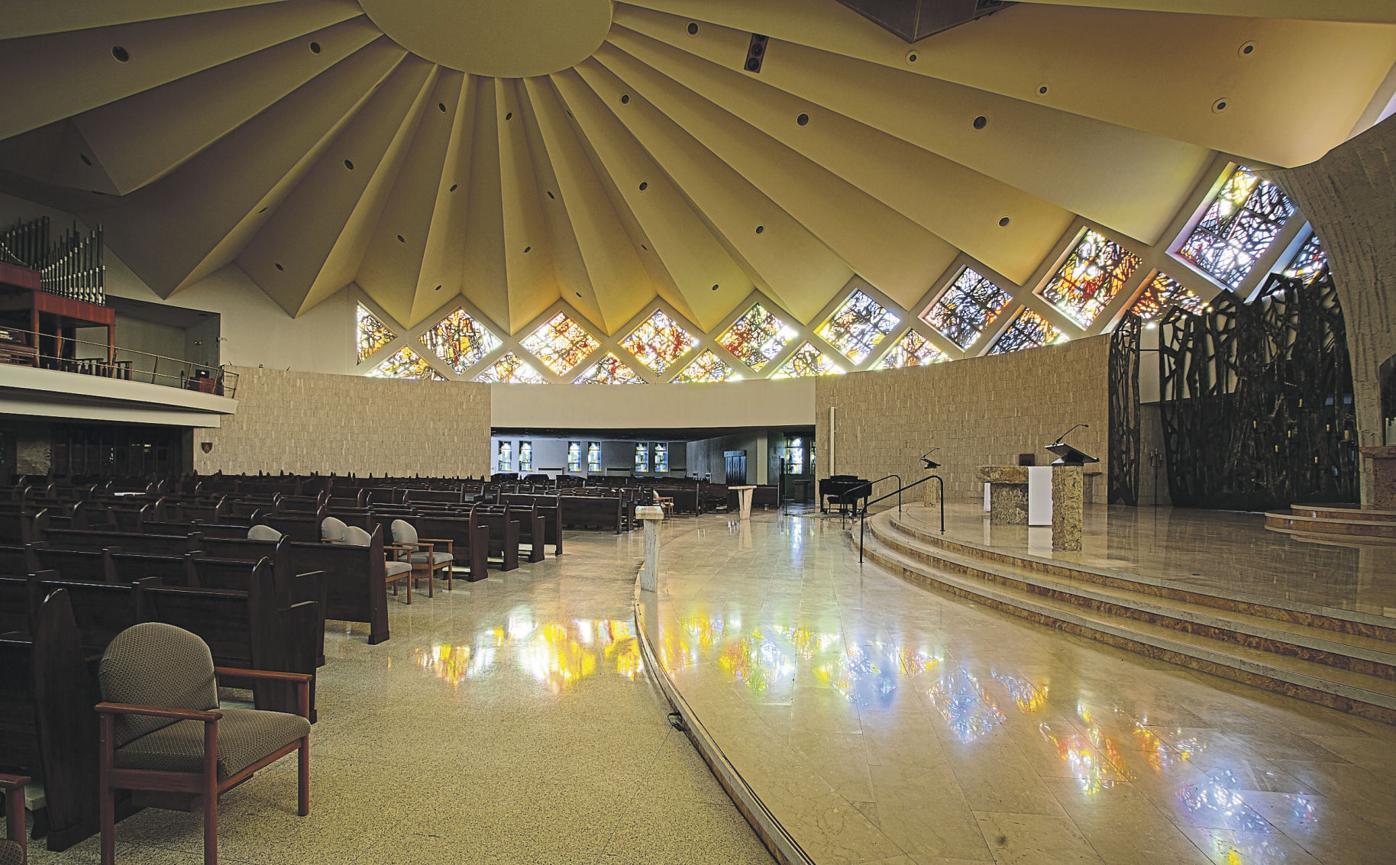 A main stretch of stained glass windows in Queen of the Rosary Chapel at Dominican Sisters of Sinsinawa, Wis. 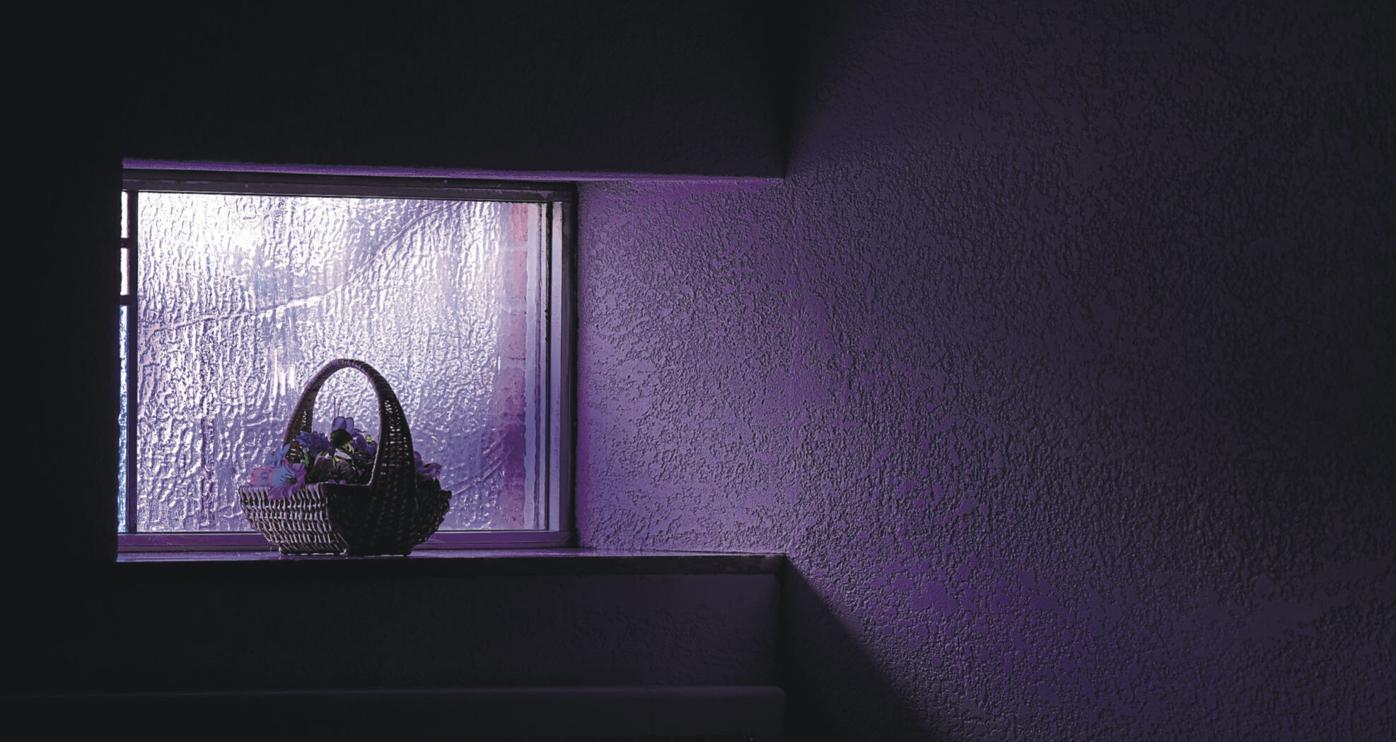 A basket sits in front of one of the stained glass windows. 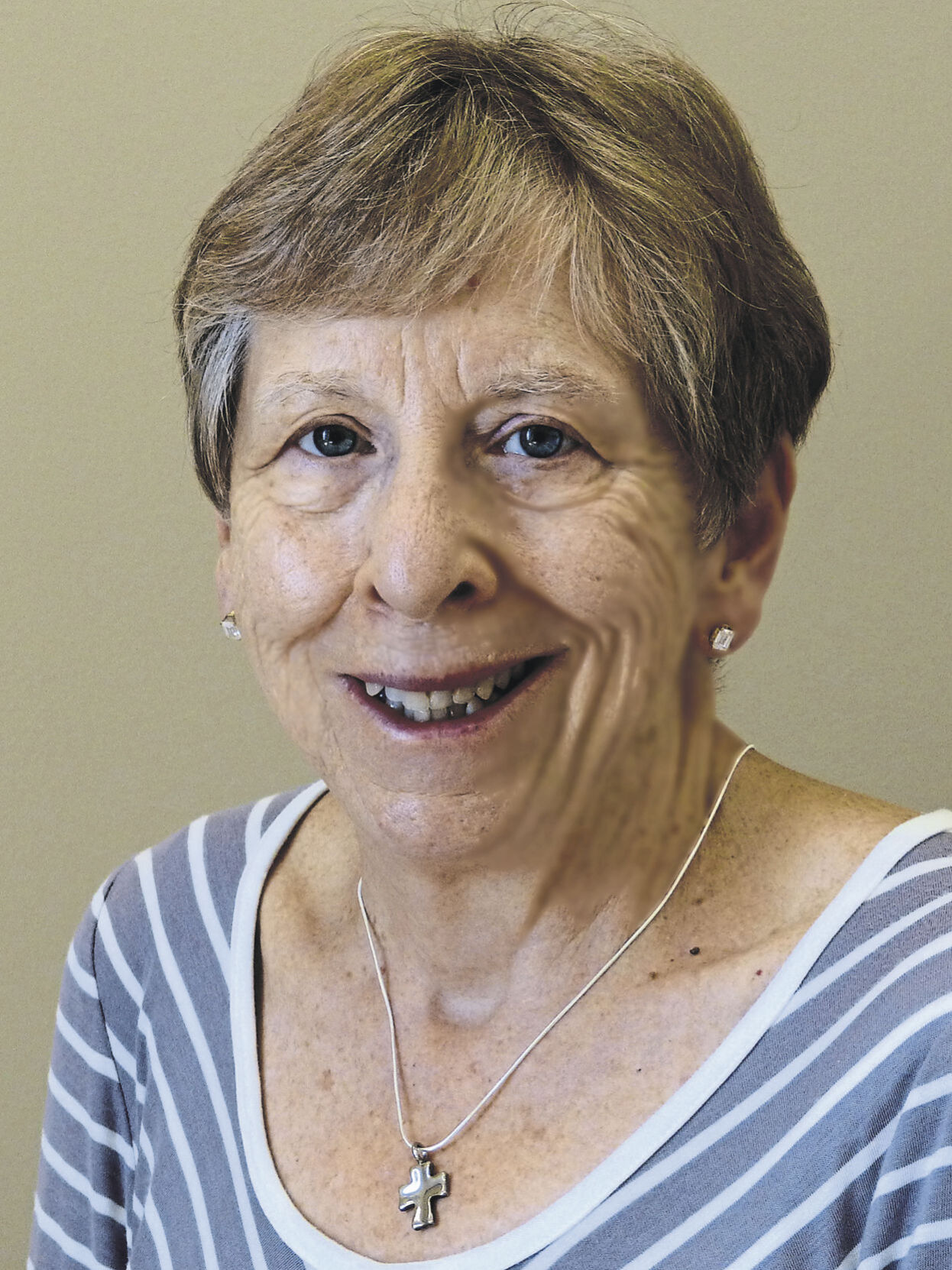 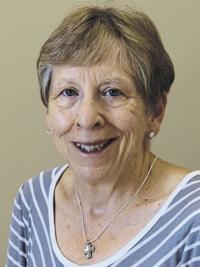 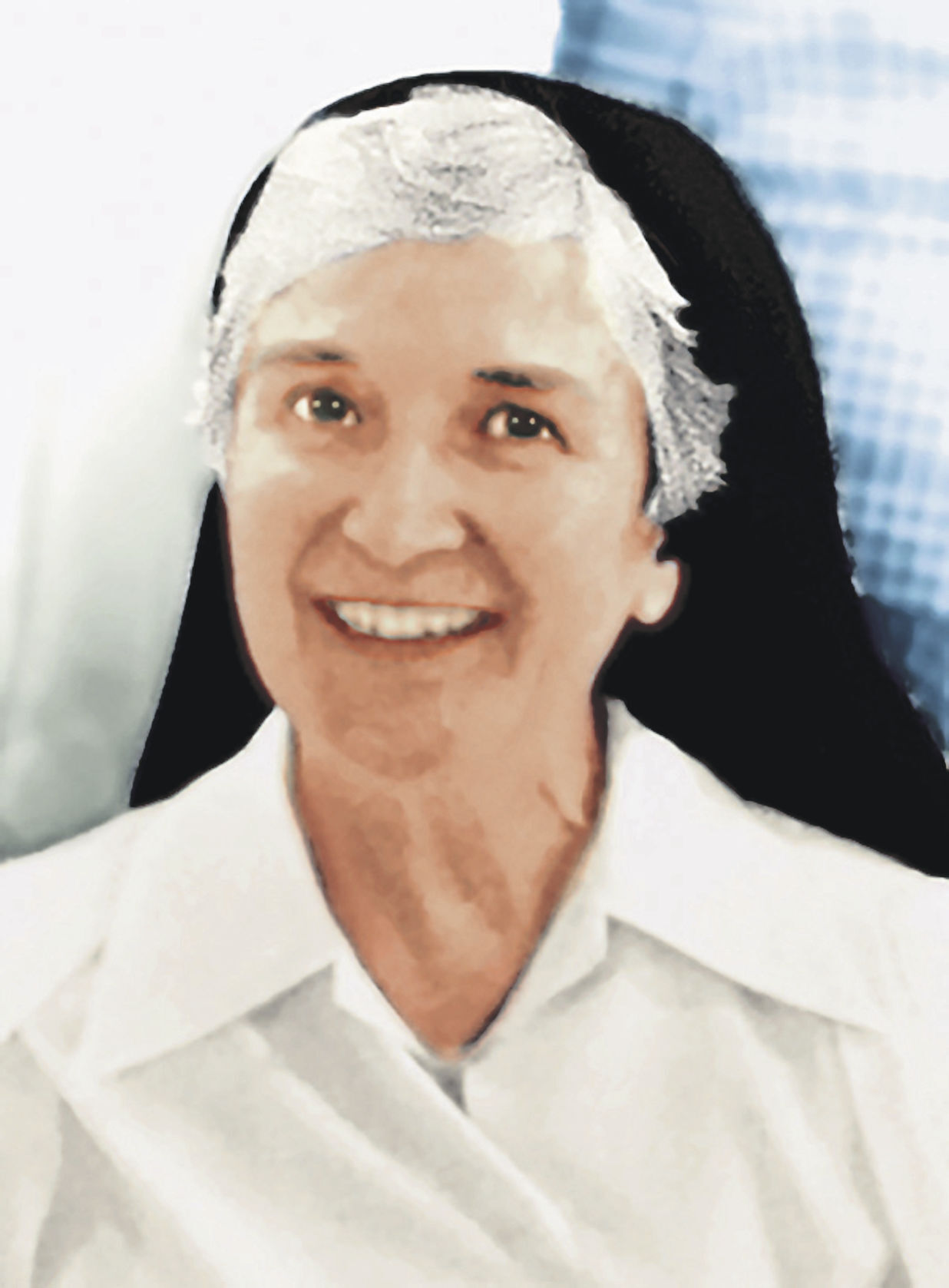 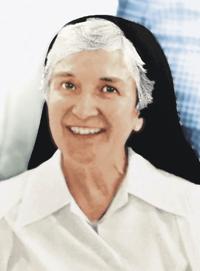 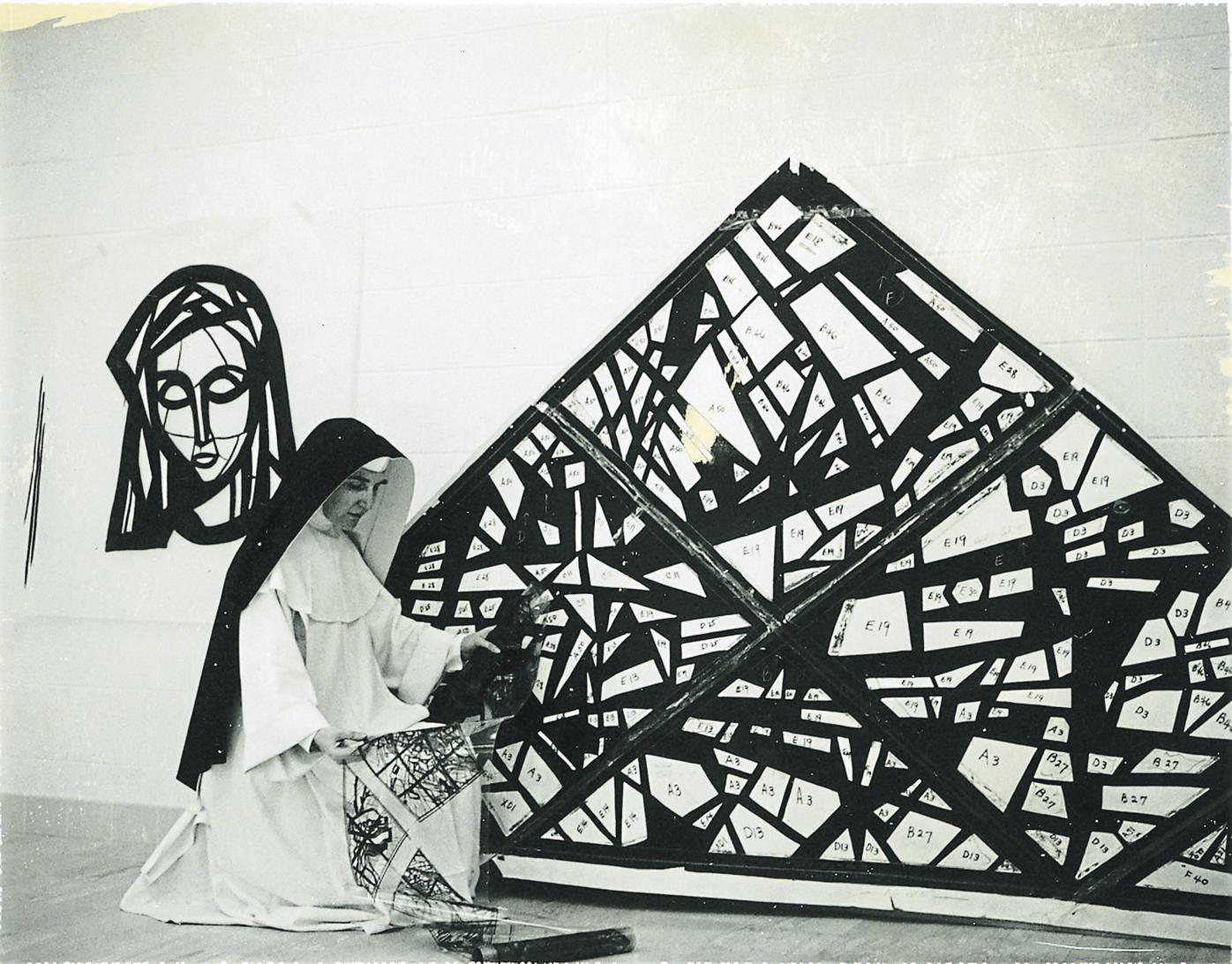 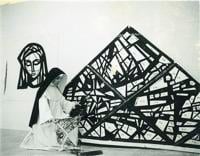 Sr. Teresita Kelly at work on one of the stained glass windows for the Queen of Rosary Chapel, circa 1965.

Queen of the Rosary Chapel opened in 1966 after a five-year designing project.

A section of stained glass windows of Queen of the Rosary Chapel at Dominican Sisters of Sinsinawa.

A main stretch of stained glass windows in Queen of the Rosary Chapel at Dominican Sisters of Sinsinawa, Wis.

A basket sits in front of one of the stained glass windows.

Editor’s note: This is the first in an ongoing series that will highlight the stained glass art collection of tri-state area worship spaces. Look for the next installment the first Saturday of each month.

SINSINAWA, Wis. — Surrounded by light, color and magnificent art, there is an immediate sense of peace when one enters Queen of the Rosary Chapel at Sinsinawa Mound.

If you sit for a while and admire the abstract diamond-shaped stained glass creations of Sister Teresita Kelly, who designed the chapel and all of its windows, something magical begins to happen. Soon, what initially appeared to be enigmatic becomes profound as sunlight reveals the figures and stories in the glass — an aubade to the day, as if sending a greeting and an invitation to stay for as long as you like.

The Sinsinawa Dominicans were established by Father Samuel Mazzuchelli in 1847. The campus has grown significantly since then, adding a bakery, a book and gift shop and senior living apartments, among other amenities and programs that often are open to the public, including Queen of the Rosary Chapel.

More than 50 years ago, Kelly embarked on a five-year project, designing the art and supervising its installation before the chapel opened in 1966.

A model of mid-century modern architecture in the vein of Finnish architect Eero Saarinen, who designed the Milwaukee Museum of Art and the St. Louis Arch, the chapel has no visible means of support.

“We have this magnificent, unobstructed ceiling,” said Sister Priscilla Wood, promoter of arts and cultural heritage at Sinsinawa Mound. “The whole thing — not the building itself but the windows, the whole sanctuary — was designed by Sister Teresita.”

Kelly also designed the altar, the sanctuary screens, the tabernacle and bas relief sculptures of Mary and Joseph on both sides of the sanctuary.

But it is the fire and light of the 37 stained glass windows that ring the circular chapel that attract the most attention, both from a human and natural standpoint.

Wood explained how Kelly employed the wonders of nature to enhance the effects of the stained glass.

“See those sparks of light?” she said, pointing them out. “They look like Christmas lights. She had the glassmaker spiral down into the thick glass so in every window there are pockets of these tiny little pieces of thin glass that become bursts of light. Her point was that stained glass is only beautiful when the light hits it. It has no purpose except to be illuminated.”

An art professor at Edgewood College, a Dominican school in Madison, Kelly was a forward-thinking artist who, even in the progressive era of the 1960s, was ahead of her time.

“The windows are made of what’s called slab glass, which was new then,” Wood said. “And what looks like black in all the windows is not leaded glass, it’s epoxy cement. That gives the windows some breathing room, so they can give and take a little bit. And each window weighs about 850 pounds.”

The epoxy cement served a dual purpose in the design of each window.

“Artists know about positive and negative space,” Wood said. “So, instead of lead, where the goal is to have the leading be as even as possible, the epoxy cement becomes part of the design. It’s the negative space. It doesn’t just hold the glass in place, it becomes part of the overall impression of shape and line and form. (Sister Teresita’s) ability to blend the epoxy cement and the stained glass to create that is amazing.”

Kelly worked with Conrad Schmitt Studios in Milwaukee, a well-known conservator and creator of stained glass, to craft the windows from her designs. She oversaw every detail, from the materials to the colors used for each piece of glass.

“Every window has a theme,” Wood said. “(Sister Teresita) used several metaphors. One of those themes was the rosary. So the windows on the east are joy, the center is the passion and death and resurrection of Jesus, and then the depiction of eternal life and the glory.”

Another prominent theme depicted throughout each window is fire.

“The fire of love,” Wood said. “She also took that as one of her themes. So in almost all of the windows, there is some orange, yellow or red. Sometimes it dominates, sometimes it’s barely there, but there is always the underlying theme of the love of Christ in every window.”

Another window is an homage to St. Dominic, the founder of the Dominicans, and the women of the congregation, represented by a woman in yellow behind him. Another depicts Moses and Abraham. In Abraham’s hand is a dagger, and at the tip of the dagger is his son, Isaac.

“This shows Abraham’s willingness to sacrifice Isaac,” Wood said. “So (Sister Teresita) honors the Hebrew ancestors. I’ve had the experience of having both Muslim and Jewish people on tours who’ve said, ‘We’ve never been in a Christian church that honored the ancestors of the other great faiths.’”

The stained glass windows of the chapel continue to stand out as different from those in many other churches, even more than 50 years since they were installed.

“It’s the light, it’s the colors, it’s that each window could be a meditation,” said Wood. “Every window tells its own story in the light.”

Sister Teresita Kelly died in 2010. She was 96 years old. The stained glass windows of Queen of the Rosary Chapel continue to tell the stories of the gospel through her creation of art and light.

Queen of the Rosary Chapel is open to the public, and tours are available. Drop-in visitors are currently not being accepted due to COVID-19 protocols, so be sure to call ahead to arrange a visit.