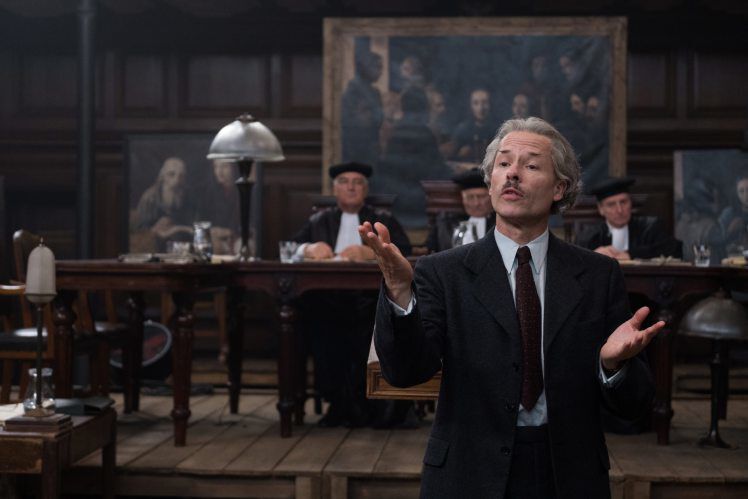 Rated R for “language throughout and brief nude images.” 130 minutes. ★★★

The film “Sound of Metal” starts with the uncomfortably loud noises of guitar feedback and ends two hours later with absolute silence. The trip through those extremes is a worthy one, if sometimes exasperating.

British actor and rapper Riz Ahmed absolutely shines as Ruben Stone, an American punk-metal drummer whose life is upended when he abruptly loses his hearing while on tour.

“Eliminate all exposure to loud noises,” a doctor advises Ruben. That’s not so easy. He’s a punk-metal drummer, after all. Loud noises is what he does.

The diagnosis threatens Stone’s livelihood but also his four-year streak at sobriety. His girlfriend and bandmate (a superb Olivia Cooke) convinces him to drive their Airstream across the country to a rehab facility that specializes in deaf addicts. There he must leave her and learn how to be deaf. And that’s where most films would usually end.

But that’s not what director and co-writer Darius Marder is after in his feature directorial debut. Yes, there’s a discussion of cochlear implants and how some in the deaf community see them as a betrayal, but deafness isn’t what “Sound of Metal” is about. It’s about belonging.

Marder, who wrote the screenplay with his brother, Abraham Marder, takes far too long to get to his points in a sluggish middle but has crafted a quite lyrical tale of a man trying to find his way when everything he knows is taken away.

Our hero’s backstory isn’t revealed until the 100-minute mark and there are too few clues to what’s churning in his interior life. But Ahmed is a revelation, another notch for a rising star. Watching his character take in and process information is riveting. Listening to him lost in silence and despairing with his big, expressive eyes is devastating.

“Sound of Metal” is the first film you’ll see where you’ll want to instantly find out who oversaw the sound design. That would be Nicolas Becker. His team jumps in and out of the world of hearing, creating scrapes, choppy distortions and muffles in the twilight between those worlds that feel just out of reach. The film has been subtitled so it can be experienced by both the hearing and deaf communities.

At the rehab facility, our drummer goes through the difficult process of rebuilding his life. Without a language in the deaf world, he is doubly lost. He learns American Sign Language with deaf elementary school kids and becomes a sort of big brother to them.

He also becomes a helpful part of the adult recovery group, drawing tattoos and following the demands of the facility owner (a terrific Paul Raci) to sit every day with a pen and paper and write his feelings out.

Ruben seems to have found his way. “You’ve become very important to a lot of people around here,” the rehab head tells him. But Ruben is really an undercover agent — he hasn’t given up on the world of the hearing.

The film has another, unexpected chapter, one set in Paris and, to be honest, it’s not seamlessly attached. Reunited with his girlfriend, Ruben now has to decide where he really fits. And if he can just enjoy the silence.

Rated R for some language, violence and nudity. 117 minutes. ★★

The true story of Dutch artist Han van Meegeren is a wild one. But don’t check Wikipedia before you watch the filmed version of this World War II story, “The Last Vermeer,” based on the book “The Man Who Made Vermeers” by Jonathan Lopez (or, perhaps do).

“The Last Vermeer” is the directorial debut of producer and stunt pilot Dan Friedkin, the screenplay adapted by James McGee, Mark Fergus and Hawk Ostby.

To inject some suspense out of the tale, the writers have taken van Meegeren’s story and wrapped it inside a Nazi art investigation that morphs into a showy courtroom drama. It’s a well-trodden generic tactic, but one that saps all the life from this tale.

During the rocky transition from Nazi occupation after the Allied liberation of Europe and fall of Hitler in May 1945, Piller is tasked with sorting out the precious artworks seized from Nazi officers. Of particular interest is a priceless painting by the Dutch painter Johannes Vermeer, “Christ and the Adulteress,” which was obtained by Nazi bigwig Hermann Goring for a hefty sum. Hunting down collaborators (who are being shot by firing squad in the street), Piller tracks down Han van Meegeren, an erstwhile artist, art dealer and bon vivant.

The artist swears his own innocence, but Piller imprisons him in a gallery attic while he tracks down his various other close confidants to deduce who sold what to whom. Was Goring merely a fan of Dutch Golden Age painting, or was he competitive with Hitler? Was the expensive artwork a guise for laundering money? Is this particular painting worth anything, and who is the arbiter of that value?

“The Last Vermeer” is handsomely shot by Remi Adefarasin, and sumptuously production designed by Arthur Max, who crafted the rich, plush interiors upon which the investigation plays out. There’s plenty of material for an exploration of the ethical complications of life in an occupied country, something that deeply troubles Piller at home and at work. Not to mention the philosophical conversations about the valuation of art, a topic upon which van Meegeren, the critically derided artist, expounds at length.

But for a film that is built on layers of lies and information, the script makes almost no effort to conceal or reveal information. All that text is right there on the surface, and therefore, there’s barely a shred of mystery or intrigue. The only question worth pursuing is where allegiances lie, a quandary that bedevils the blandly heroic Piller, a man whose only crumb of characterization is that he’s a “Dutch Jew in a Canadian uniform.” Even worse, the brilliant Luxembourger actress Vicky Krieps is utterly wasted in a grievously underwritten role as his assistant.

The film capably, if expectedly, proceeds down this standard procedural path, progressing from investigation to trial, with flourishes of genius every now and again from Pearce, having some campy fun as van Meegeren.

Even with a few courtroom theatrics and some profound ethical issues to chew on, “The Last Vermeer” is ultimately a dreadfully milquetoast outing.

“Dolly Parton’s Christmas on the Square”: The musical opens Sunday on Netflix. Christine Baranski plays a Scrooge in stilettos who is trying to evict an entire town by Christmas eve. Dolly, naturally, plays an angel who visits to convince her otherwise. And if that weren’t enough, it was directed and choreographed by Debbie Allen.