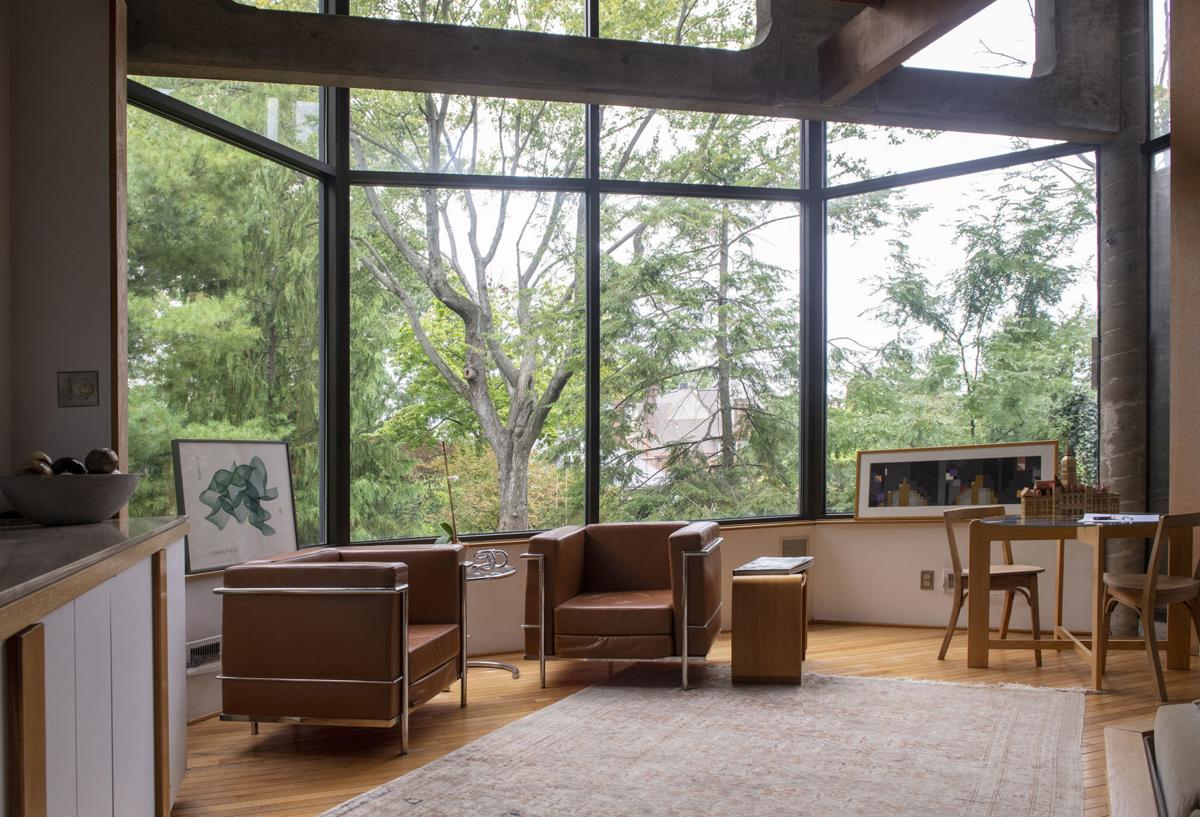 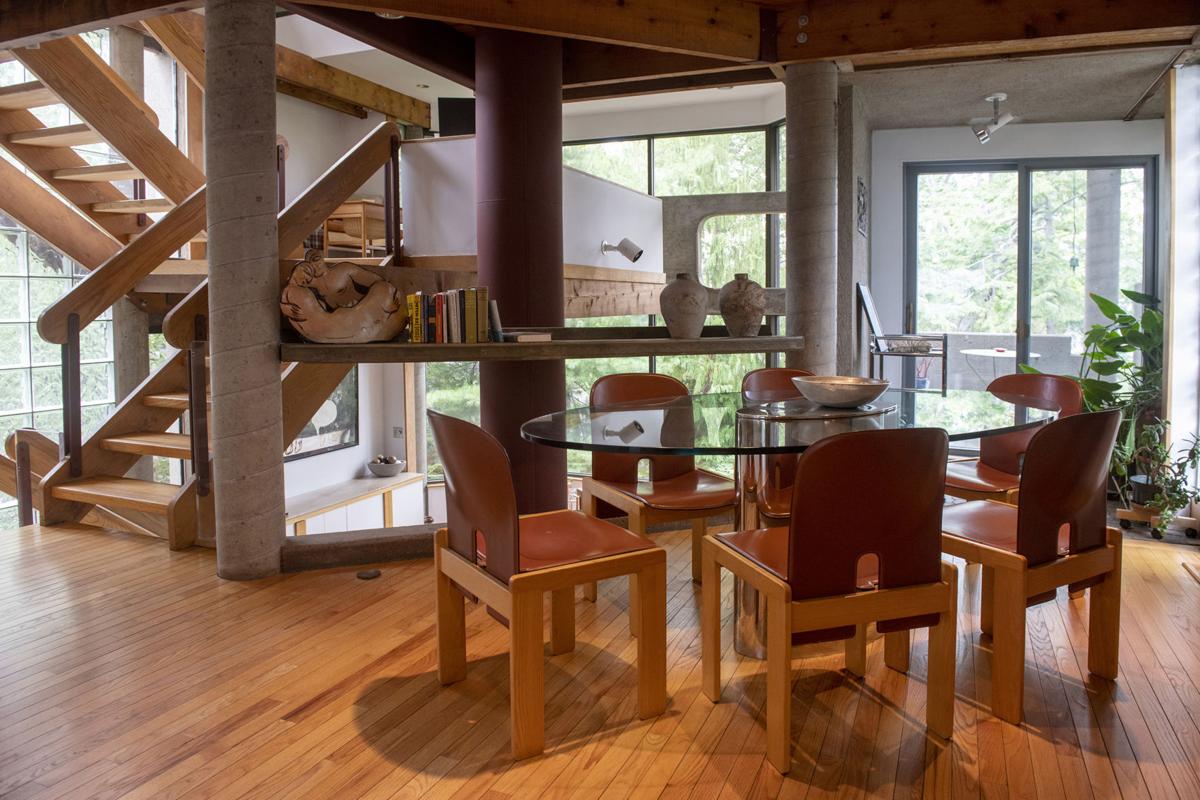 The dining area in the Shadyside home. 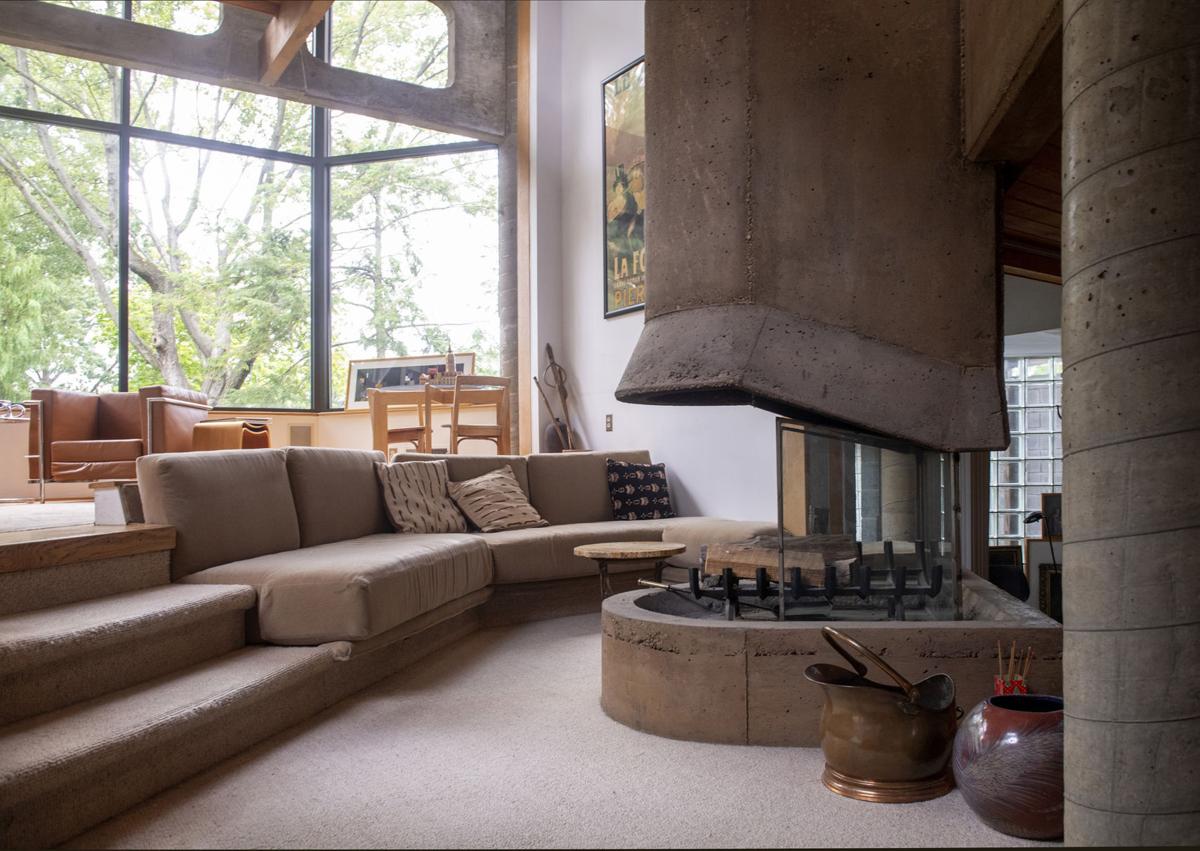 Natural light streams into a fireplace area just below the living room at Katselas’ home.

The dining area in the Shadyside home.

Natural light streams into a fireplace area just below the living room at Katselas’ home.

PITTSBURGH — “Architecture is about life and the people that live it,” says Tasso Katselas, the architect whose work can be seen at Pittsburgh International Airport, Carnegie Science Center, Community College of Allegheny County — and his home.

He is known for his liberal use of concrete and glass, and his private residence is no exception.

Hidden in the middle of the Shadyside area of Pittsburgh, with trees providing privacy, this secluded, vertical house surely has something to do with keeping the 93-year-old in great shape. He has no trouble navigating its four floors via the staircase that is the spine of this house. He regularly traverses all four levels and its many landings.

“As you go up half a level or even every three or four steps, there is an activity center,” he explained.

Among the spaces where he’s most active are the library, office and living room, which has a sunken fireplace surrounded by built-in seating. His study is probably the tiniest room in the house and is on the lowest level. He can look out at a swimming pool shaped like Allegheny County.

“The fact is we put the pool in before we built the house because there would be no way to get to the pool area otherwise,” he noted.

Katselas designed the house for himself and his late wife, Jane, an artist whose work hangs throughout.

Visitors enter a reception area with a generous, curved banquette against a glass-block wall.

“It’s a large space for friends to sit and talk, and then you can gravitate up to the fireplace with built-in seating for four to six people,” he said.

“We had a large glass spoon which we used to put over the fireplace to melt cheese and drink wine during the winter months. Those are evenings that I cherish.

“After my wife died, I have not used it much but the memory lingers.”

Two steps up from the fireplace is the living room, which features a three-story window wall. A sliding desk that was his wife’s floats above the living room.

“Above that is the bedroom and bath. But before you get to that you stop at the little library space,” he said.

In 40 years of living here, the architect has completed at least five alterations to the house, which sits on a lot only 24 feet wide. “The solution had to be a vertical solution.”

“If you are going to build a house or change a space, my advice is to think carefully about it: Make it human, accept what’s available, buy into light and try to make a scale that accepts you rather than dominates you,” he offered.

After his wife injured her knee in a fall, Katselas said they bought the lot next door to add a guest room and an elevator. Daughters Dana and Lisa were worried about their mother.

“My children called and said, ‘Mom is not going to be able to do all those stairs,’” he remembered. “When I put the elevator in, I did an interesting curved master bed for guests. That basically changed the quality of the house, making it more of a home rather than an escape place.”

The most recent alteration was enclosing a deck off the kitchen.

The original guest room on the first floor has a built-in folding door. When it’s open, the space provides more seating for guests.

“My brother uses this for his room when he visits.”

Katselas grew up in East Pittsburgh with two brothers; one became a director, the other a geologist. They could have inherited their creativity and curiosity from their father, Milton, who traveled the tri-state area with a Greek acting troupe.

“He wore the Fustanella,” a traditional Greek skirt worn by men, his son said with a smile. “Most of the plays were old Greek adaptions done for Greek groups.”

At home, the family often talked about theater, philosophy and music.

“But my father also liked boxing,” he noted.

The woodwork in many rooms was sourced from an old winery. One of the home’s best features is the way it captures sunlight.

“It comes in from all sides through the glass block and the open windows on the north and south of the house,” said its designer. “Even more important is the moonlight ... We can lie in bed and see the moon.”

Katselas is currently writing his seventh memoir. Having been to 28 countries, meeting many artists and leaders, he has a lot to share.

”I have been influenced dramatically by the exchanges I have had,” he said.

As for his Pittsburgh home he said,