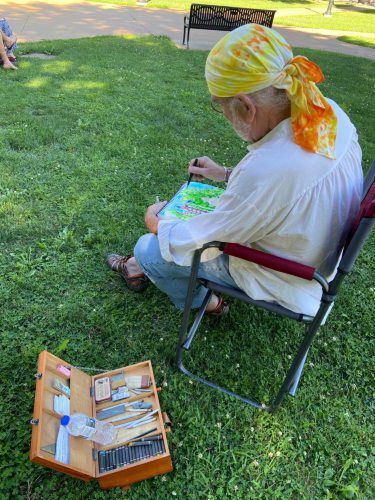 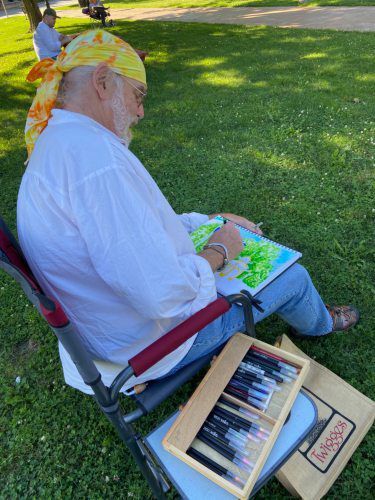 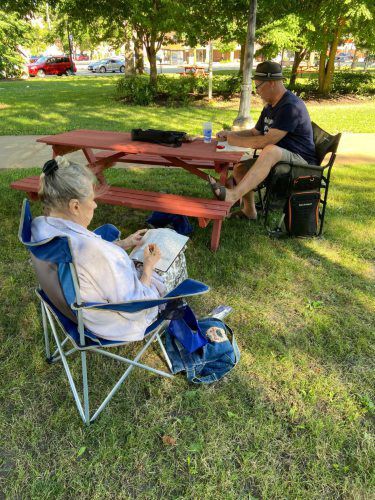 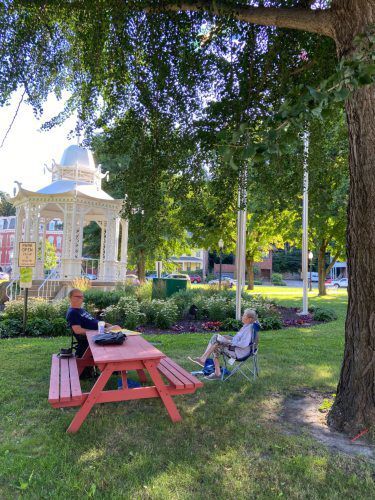 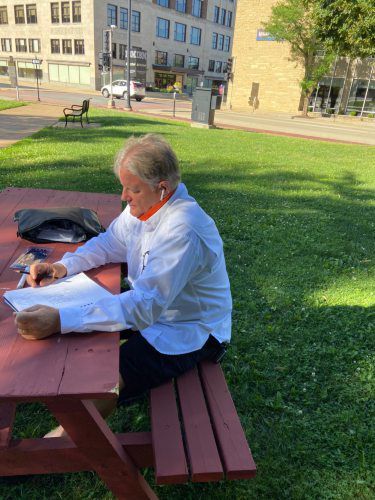 Bob Felderman works on a sketch in Washington Square in Dubuque. 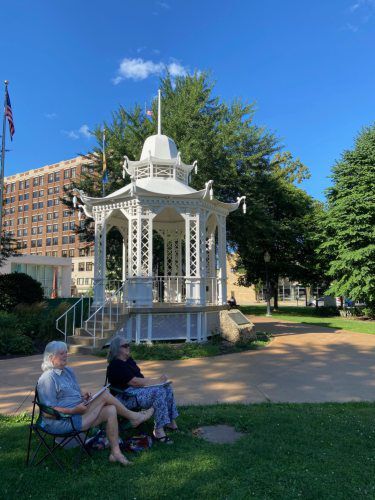 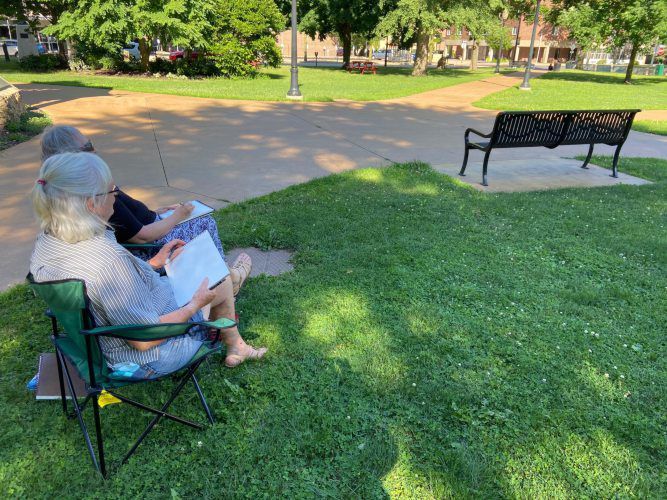 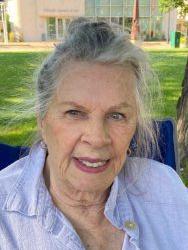 Bob Felderman works on a sketch in Washington Square in Dubuque.

For many with an admiration for or an involvement in the arts, the COVID-19 pandemic has posed a challenging, if not heartbreaking, time.

Gathering restrictions and health precautions have caused some organizations to remain temporarily shuttered, while others have limited reopenings or pivoted to online offerings, from gallery exhibits to play readings and “live” performances.

However, one local organization has taken its creative itch to the streets.

The group calls itself Dubuque Urban Sketchers. On Wednesday evenings, its local members can be found at a designated location each week in downtown Dubuque, sketching or painting on pads of paper.

Urban Sketchers is an international organization. In total, its Dubuque chapter is made up of about 100 area artists, though since the pandemic took hold, approximately eight to 10 have been participating in its weekly gatherings.

The chapter was launched a year ago as a way for local sketchers and painters of all ages and skill levels to gather socially and capture the visual spectacle that downtown Dubuque has to offer.

It also had a presence at 2019’s Bluff Strokes with a workshop, “Being Present through Urban Sketching,” in support of the fledgling group.

During cooler months, the group can be found frequenting local watering holes, sketching customers or what brews are on tap. Warmer seasons see them outdoors, gathering at locations including Cathedral Square, the Roshek Building, the Dubuque Museum of Art, Carnegie-Stout Public Library, Washington Square and the Historic Millwork District, among others.

For artists participating in the era of COVID-19, it has offered them a natural means to social distancing, while allowing for a creative outlet.

“I saw something on the internet about Urban Sketchers and paint outs they were having in Chicago, Kansas City and all around the world,” said Bibi Burke, a self-described “artist wrangler” who spearheaded the Dubuque chapter. “I already knew a lot of artists locally. It was easy to start, and everyone thought it was a good idea for Dubuque. So, we thought we would see what was possible, and we did it.”

The group began with approximately 15 artists that Burke had reached out to directly. They would gather to sketch or paint, then share their creations via the Dubuque Urban Sketchers Facebook group page.

Eventually, word of mouth spread, and more people started showing up. Suddenly, demand for the group’s meetings grew from once per month to once per week.

“It’s free,” Burke said. “There are no rules. A lot of people say, ‘Well, I’m not an artist,’ or ‘I’m not very good at sketching.’ There are only a few in the group who are professional artists. For the rest, it’s an opportunity to learn, to express and to get out and do something that we enjoy doing. It’s a new medium for many of us. And through it, we’re learning to see the world around us differently and maybe notice things we’ve never noticed before.”

For Dan Aldeman, 66 — a Dubuque artist only three years in the making who works in copper scultping — Urban Sketchers has provided him another means to visualizing art and focusing on the makeup of his creations. It also has given him the confidence to sell his artwork and explore getting it into local galleries — things he admitted can be a challenge as a new artist.

“It’s not about knowing how to draw,” he said. “It’s about being able to share with this community. We all feed off of each other, and we push each other. Even being able to look back on our eraser marks helps tell our journey with art.”

Urban Sketchers also proved a respite for him amid COVID-19 restrictions. Aldeman rejoined the group for paint outs approximately five weeks ago after spending some time sheltering at home.

“For a lot of us in this age group, going out can be a little disconcerting right now,” he said. “What really brought me back was seeing Bibi return. I figured if it’s safe for her, I can start to feel safe, too. And I do. I feel free again. It’s been a joy.”

Henry Matthiessen, a photographer who relocated to Dubuque a year ago and who owns Stoned Art Studio on Central Avenue, said that Urban Sketchers has enabled him to connect with other area artists.

“I spend a lot of time in a studio by myself,” he said, a colorful image of Washington Square’s central gazebo coming to fruition on the page in front of him. “When you’re around other people who create, you get that uplifting ‘juju’ vibe. Plus, I can apply a lot of what I do with painting to my photography.”

Bob Felderman, another Dubuque photographer who owns General Bob Photography, said opportunities to “doodle” in Urban Sketchers have helped him to work through his PTSD from his time in the military. It, too, gave him an outlet during COVID-19, as he remained cautious due to his health and the health of his 85-year-old father.

“I always liked doodling,” he said. “It helps me to relax, and it’s just fun. It’s a good group of people. And with COVID, we’re outdoors and can remain spread out.”

Mary Jo Pancratz and longtime friend Pat McCullough, both of Dubuque, sat together drawing with Urban Sketchers during a recent Wednesday gathering.

“It helps keep me motivated,” said Pancratz, a former art instructor for Hillcrest Family Services. “The friendships are the best part. You meet people you might have never met.”

“Nobody judges,” she said. “Everybody encourages everyone else. It’s very relaxing, and there’s a camaraderie. It’s just so nice to get outside like this and do our own thing after being cooped up in a building.”

The community fostered within Urban Sketchers is just the tip of the iceberg for Burke, who envisions an arts center that could help extend the reach of local art to those under-served throughout the area.

“We saw this great sense of community with the Solidarity mural, where the community was invited to come down to help paint,” Burke said, citing the recent public art display adorning Five Flags Center as an example. “It’s so important to the arts that the community has an opportunity to be involved.”