3:33 AM
XX°
VIEW FULL FORECAST
CURRENT
Waiting in the wings: After a lengthy hiatus due to COVID-19, the Dubuque Symphony Orchestra braces for its 62nd season
What's on tap: Fall is in the air as locals prep Oktoberfest brews
Fresh to your door: Ready-made meals, organic produce from local sources
1 of 3 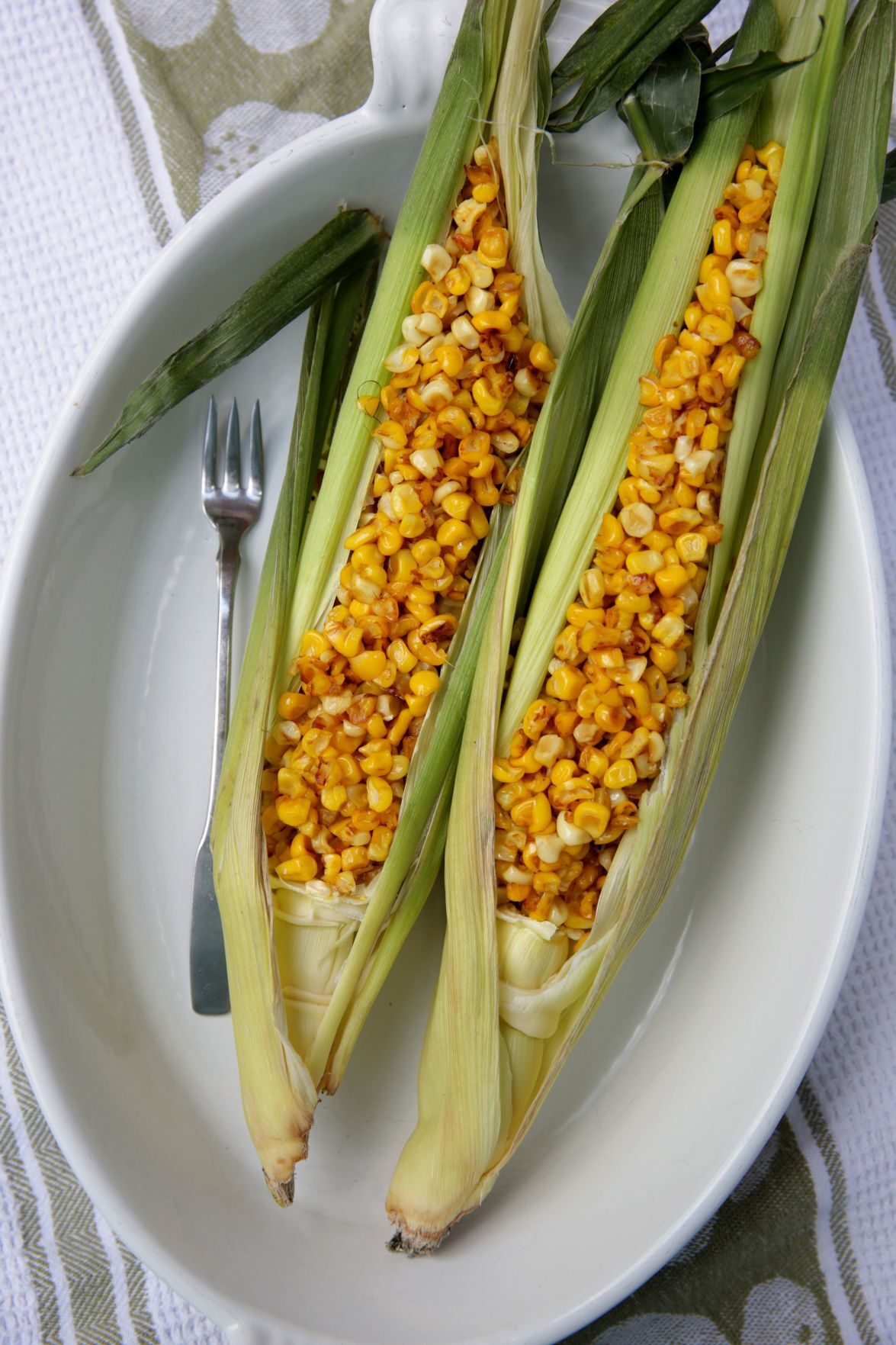 Pan-Roasted corn, off the cob, served in corn husks. 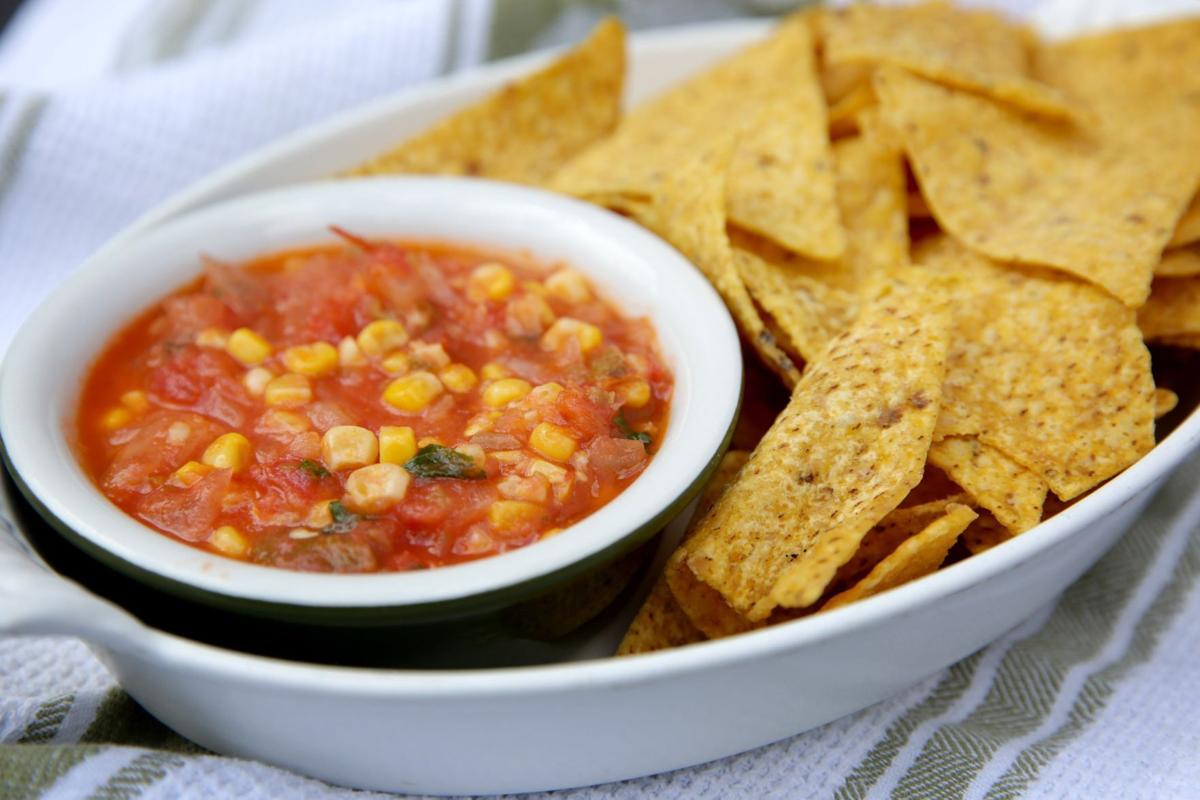 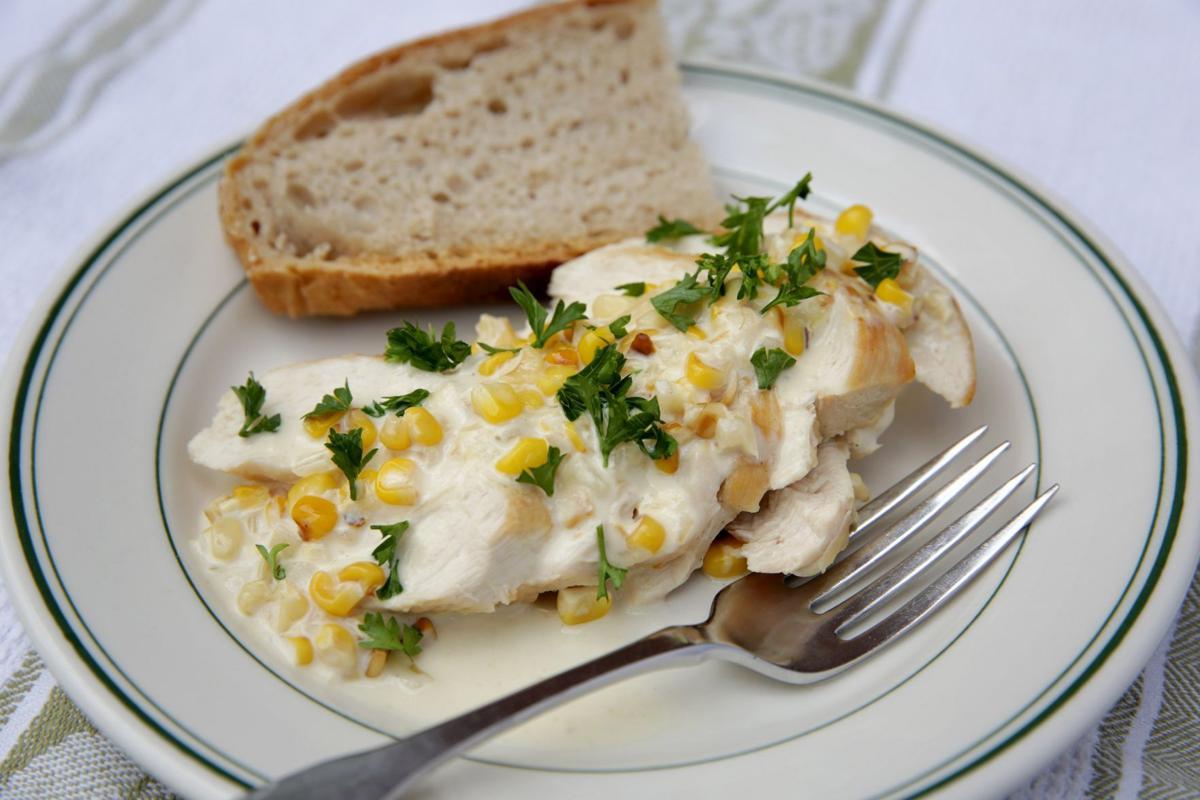 Pan-Roasted corn, off the cob, served in corn husks.

Pan-roasted corn off the cob is a special kind of delicious. Cooking the kernels in a pan concentrates their flavor, making it just a little sweeter, but also adds deeper, lower and earthier notes to the taste.

Plus, the corn is flecked with lovely brown spots. It never hurts to add a little visual appeal.

I decided to create four distinctly different recipes using pan-roasted corn — though two are kind of similar. That’s my fault. But they both stem from the same idea: Corn mixed with cream is sublime. Especially when the corn has been roasted in a pan.

I began with an entree that is worthy of serving to company but is quick and easy enough to make on a weeknight. I call it Chicken with Roasted Corn Sauce, the name does not do it credit. Recipe names are hard.

The sauce is made with Dijon mustard, cream and white wine (but that’s too many words to put into the title). Dijon cream sauce is a classic with chicken, and I just added corn for an additional irresistible layer of deliciousness.

The sauce requires whipping cream (any lighter cream cannot be simmered), so it is quite rich. It’s not an everyday dish, but if you want to splurge it is definitely the way to go.

Just don’t say it has a creamed-corn sauce. It might be technically true, but if just sounds too inelegant.

For the other dish using a creamed-corn sauce, I put it on penne pasta. The biggest difference between the chicken dish and Pasta With Corn and Cream, other than the lack of chicken, is the ingredient that provides the bass note to the sauce.

Unlike the chicken dish, which makes exquisite use of Dijon mustard, the pasta dish is more rustic in its reliance on onions.

Sauteing onions brings out their subtle sweetness, which is what makes Pasta With Corn and Cream so delectable.

The other two pan-roasted corn dishes I made were inspired by the flavors of Mexico.

The best-known street food south of the border is elote, grilled corn on the cob that is slathered with a mixture of mayonnaise and queso fresco cheese and sprinkled with spices.

I also made a salsa, but not just any salsa. Because the corn was pan-roasted, I decided also to pan-roast the other vegetables. This extra step made the salsa’s flavor more mellow and easy-going.

It was hot, because I like my salsa hot. If you do not, simply remove the pepper’s seeds and pith, and you can always use less pepper.

• Note: If you use cream with less butterfat than whipping or heavy cream, be sure to keep it from simmering or boiling.

Cook chicken by either poaching or braising it. To poach, place chicken in just enough water to cover, bring to a simmer and cook until done, 10-15 minutes, depending on the size of the breasts. To braise, sear chicken on both sides in ½ tablespoon of butter or oil in a skillet, add ½ cup water, lower to a simmer, cover and cook until done, 15-20 minutes, depending on size. If liquid evaporates before done, add more water.

1. Remove the kernels from the corn. Melt 1 teaspoon (1/3 tablespoon) butter in a skillet over medium-high heat, add corn and cook, stirring frequently, until kernels develop small brown spots, about 20-25 minutes. Set aside.

2. In a saucepan (or the same clean skillet), melt the remaining 1 teaspoon (1/3 tablespoon) butter over medium high heat. Add the garlic and cook until fragrant, 30 seconds-1 minute. Add wine and mustard and stir until thoroughly combined. Simmer until liquid is nearly evaporated.

3. Add cream and reserved corn. If using whipping or heavy cream, simmer for 1-2 minutes. If using a lighter cream, cook without simmering for 1-2 minutes. Season with salt and pepper to taste. Slice chicken crosswise and spoon sauce over to serve.

PASTA WITH CORN AND CREAM

• Note: This recipe calls for the cream to boil, so do not use any lighter cream than whipping or heavy cream.

1. Put on water to boil for pasta.

2. Cut kernels from ear of corn. Melt ½ tablespoon of the butter in a skillet over medium-high heat, add corn kernels and cook, stirring frequently, until kernels have small brown spots, about 20-25 minutes. Set aside.

3. In a saucepan or the same clean skillet, melt the remaining ½ tablespoon of butter, add onions and cook, stirring occasionally, until onions are translucent, about 3-5 minutes. Add wine, chicken stock and tomatoes and simmer until liquid is reduced by half, 5-7 minutes. Meanwhile, start to cook the pasta.

4. Add cream to the mixture, bring to a boil, reduce temperature and simmer until thickened, 5 minutes. Stir in the corn. Taste and add salt and pepper if necessary.

5. Serve over cooked pasta with 2 torn basil leaves per serving.

1. Cut the kernels off the corn. Melt butter in a large skillet over medium-high heat, add corn and cook, stirring frequently, until most kernels have small brown spots, about 20 minutes.

3. Place 4 portions of lettuce on plates. If using chicken, place on lettuce. Top with corn mixture.

1. Cut kernels off the cob. Melt butter in a skillet over medium-high heat. Add the corn and cook, stirring frequently, until the kernels develop small brown spots, about 20-25 minutes. Set aside.

2. Heat oil in large skillet over medium-high heat until hot. Add the tomatoes, onions and jalapeno (if using). Cook, turning frequently, until vegetables are softened and colored, and the tomatoes start to break down, about 10 minutes.

3. Place tomatoes, onions and jalapeno in blender with the salt and lime juice. Blend briefly until chunky. Pour into a serving bowl and stir in reserved corn and cilantro.