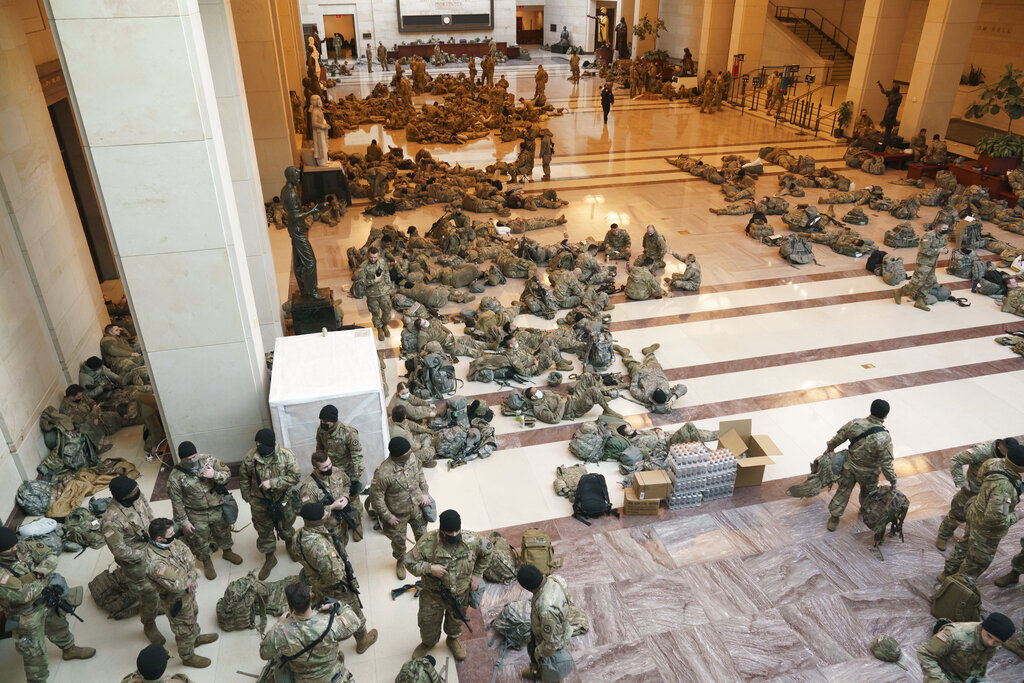 Hundreds of National Guard troops stage inside the Capitol Visitor's Center to reinforce security at the Capitol in Washington. The House of Representatives is pursuing an article of impeachment against President Donald Trump for his role in inciting an angry mob to storm the Capitol last week. 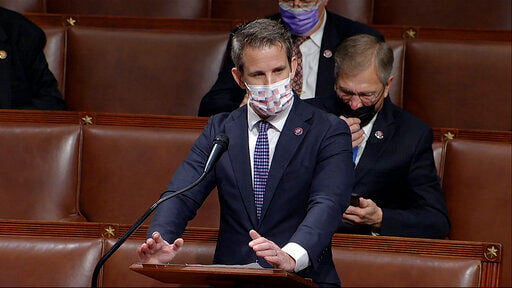 In this image from video, Rep. Adam Kinzinger, R-Ill., speaks as the House debates the objection to confirm the Electoral College vote from Pennsylvania, at the U.S. Capitol early Thursday, Jan. 7, 2021. (House Television via AP)

Hundreds of National Guard troops stage inside the Capitol Visitor's Center to reinforce security at the Capitol in Washington. The House of Representatives is pursuing an article of impeachment against President Donald Trump for his role in inciting an angry mob to storm the Capitol last week.

In this image from video, Rep. Adam Kinzinger, R-Ill., speaks as the House debates the objection to confirm the Electoral College vote from Pennsylvania, at the U.S. Capitol early Thursday, Jan. 7, 2021. (House Television via AP)

WASHINGTON — President Donald Trump was on the verge of being impeached for a second time today as the House sped to a vote just a week after he encouraged loyalists to “fight like hell” against election results and then a mob of his supporters stormed the U.S. Capitol.

During debate on the articles of impeachment, House Speaker Nancy Pelosi asked Republicans and Democrats to “search their souls” ahead of the historic afternoon vote. Trump would be the first American president to be impeached twice.

Trump “must go,” Pelosi said. "He is a clear and present danger to the nation we all love.”

Actual removal seems unlikely before the Jan. 20 inauguration of President-elect Joe Biden. A spokesman for Senate Majority Leader Mitch McConnell said the Republican leader would not agree to bring the chamber back immediately, all be ensuring a Senate trial could not begin at least until Jan. 19.

But momentum for action in the House was unstoppable.

The impeachment proceedings came one week after a violent, pro-Trump mob breached the U.S. Capitol, sending lawmakers into hiding and revealing the fragility of the nation’s history of peaceful transfers of power. The riot has also forced a reckoning among some Republicans, who have stood by Trump throughout his presidency and largely allowed him to spread false attacks against the integrity of the 2020 election.

While Trump’s first impeachment in 2019 brought no Republican votes in the House, at least six House Republicans were breaking with the party to join Democrats this time, saying Trump violated his oath to protect and defend U.S. democracy. Among them was Wyoming Rep. Liz Cheney, the third-ranking Republican in the House and the daughter of former Vice President Dick Cheney.

As two Republican lawmakers — Washington Reps. Dan Newhouse and Jaime Herrera Beutler — announced on the floor they would vote to impeach, Trump issued a new statement urging “NO violence, NO lawbreaking and NO vandalism of any kind.” But he has repeatedly declined to take any responsibility for last week's riots.

House Republican Leader Kevin McCarthy said for the first time that Trump does bear responsibility, acknowledging on the House floor before the vote that Biden is the next president and that radical liberal groups were not responsible for the riots, as some conservatives have falsely claimed.

But McCarthy said he opposed impeachment, instead favoring a “fact finding commission” and censure.

As for threats of more trouble from intruders, security was exceptionally tight at the Capitol with shocking images of massed National Guard troops, secure perimeters around the complex and metal-detector screenings required for lawmakers entering the House chamber.

“We are debating this historic measure at a crime scene,” said Rep. Jim McGovern, D-Mass.

Though McConnell is declining to hasten an impeachment trial, a Republican strategist told The Associated Press the GOP leader believes Trump committed impeachable offenses and considers the Democrats’ impeachment drive an opportunity to reduce the divisive, chaotic president’s hold on the GOP.

McConnell called major Republican donors last weekend to gauge their thinking about Trump and was told that Trump had clearly crossed a line. McConnell told them he was through with Trump, said the strategist, who demanded anonymity to describe McConnell’s conversations.

The stunning collapse of Trump’s final days in office, along with warnings of more violence ahead, leaves the nation at an uneasy and unfamiliar juncture before Biden takes office.

Trump faces a single charge of “incitement of insurrection.”

The four-page impeachment resolution relies on Trump’s own incendiary rhetoric and the falsehoods he spread about Biden’s election victory, including at a White House rally on the day of the Jan. 6 attack on the Capitol, in making its case for “high crimes and misdemeanors” as demanded in the Constitution.

Trump took no responsibility for the riot, suggesting it was the drive to oust him rather than his actions around the bloody riot that was dividing the country.

A Capitol police officer died from injuries suffered in the riot, and police shot and killed a woman during the siege. Three other people died in what authorities said were medical emergencies. Lawmakers scrambled for safety and hid as rioters took control of the Capitol, delaying by hours the tally of Electoral College votes that was the last step in finalizing Biden’s victory.

The six Republican lawmakers, including Cheney, were unswayed by the president’s logic. Their support of impeachment cleaved the Republican leadership, and the party itself.

Unlike a year ago, Trump faces impeachment as a weakened leader, having lost his own reelection as well as the Senate Republican majority.

The president was said to be livid with perceived disloyalty from McConnell and Cheney, as calls mounted for her ouster. He was also deeply frustrated that he could not hit back with his shuttered Twitter account, the fear of which has kept most Republicans in line for years, according to White House officials and Republicans close to the West Wing who weren’t authorized to speak publicly about private conversations.

The team around Trump has hollowed out, without any plan for combating the impeachment effort. Trump leaned on Sen. Lindsey Graham of South Carolina to push Republican senators, while chief of staff Mark Meadows called some of his former colleagues on the Hill.

Trump was expected to watch much of today’s proceedings on TV from the White House residence and his private dining area off the Oval Office.

The House tried first to push Vice President Mike Pence and the Cabinet to intervene, passing a resolution Tuesday night calling on them to invoke the 25th Amendment to the Constitution to remove Trump from office.

Pence made it clear he would not do so, saying in a letter to Pelosi, that it was “time to unite our country as we prepare to inaugurate President-elect Joe Biden.”

It’s far from clear there will be the two-thirds vote in the evenly divided Senate needed to convict Trump, though at least two Republicans have called for him to “go away as soon as possible.”

The FBI warned ominously of potential armed protests by Trump loyalists ahead of Biden’s inauguration. Capitol Police urged lawmakers to be on alert. Charges of sedition are being considered for rioters.

Biden has said it’s important to ensure that the “folks who engaged in sedition and threatening the lives, defacing public property, caused great damage — that they be held accountable.”

Fending off concerns that an impeachment trial would bog down his first days in office, the president-elect is encouraging senators to divide their time between taking taking up his priorities of confirming his nominees and approving COVID-19 relief while also conducting the trial.

The impeachment bill draws from Trump’s own false statements about his election defeat to Biden. Judges across the country, including some nominated by Trump, have repeatedly dismissed cases challenging the election results, and former Attorney General William Barr, a Trump ally, has said there was no sign of widespread fraud.

While some have questioned impeaching the president so close to the end of his term, there is precedent. In 1876, during the Ulysses Grant administration, War Secretary William Belknap was impeached by the House the day he resigned, and the Senate convened a trial months later. He was acquitted.

Trump was impeached in 2019 over his dealings with Ukraine but acquitted by the Senate in 2020.