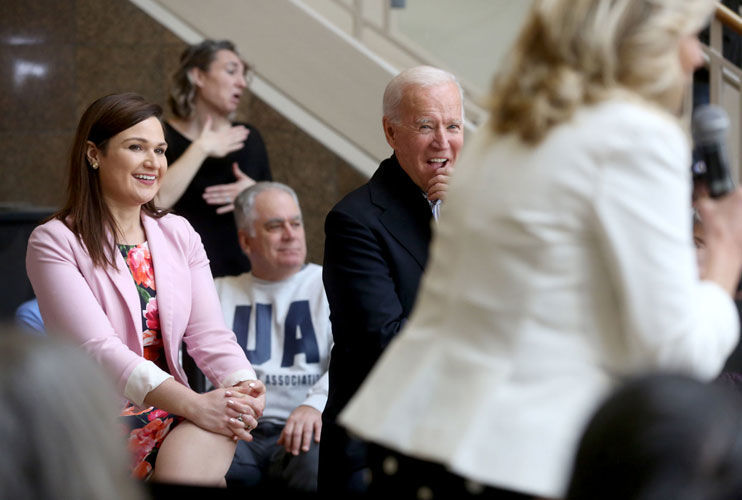 A significant cause of both those changes is the purchase of smaller farms by bigger, corporate operations and those corporations’ regularly merging.

Biden told the Telegraph Herald he believes those are consequences, in part, of young farmers not being able to get started.

“They can’t stay on the land,” he said. “They can’t purchase the land. So the proposal I have in the farm bill is to significantly increase the amount of money that can be borrowed for the purchase of the land, up to $100,000 to get a low-interest loan to get back on the farm, purchase a portion or purchase new land. And I was talking to Abby about this, who said that should exist for equipment as well.”

Finkenauer said she’s supporting a bill in the U.S. House right now to add just that. She also took a swing at the impact she believes President Donald Trump’s policies are having on Iowa farmers.

“We currently have somebody right now sitting in the White House who has turned his back on Iowa farmers who are quite literally my friends and family,” she said.

In particular, Finkenauer criticized Trump’s approve of 31 waivers of renewable fuel standard requirements given to refineries.

“(Those) have now cost our corn-growers 4 billion bushels of corn out of the market, dropping the corn prices to the lowest we’ve seen in decades,” she said. “And then (Trump) promised he’d fix it in a rule, but the rule wasn’t the right one, so he blamed the (U.S. Environmental Protection Agency), even thought it’s his EPA. … Our farmers are smarter than that.”

Biden said he would not only reverse course on the waivers, but advance biofuel opportunities.

“Turning away from the farmers and satisfying the oil companies is a gigantic problem,” he said. “We’re going to keep the commitment we made to ethanol and to cellulosics — new types of biofuels. ... As president of the United States, I will make sure that every single vehicle owned by the federal government, the largest owner of vehicles in the world, runs on ethanol, requires it as part of the mix, moving toward cellulosics and other bio-based fuels, because farmers are getting killed. But farmers are the answer.”

Ahead of the 2020 Iowa legislative session, the House’s Republican majority has turned to a new tool to help them organize and establish their platform.

According to area Republican representatives, this year the group caucused not just once this winter in Des Moines, but again, remotely, via a digital conferencing tool.

“That was great,” Iowa Rep. Shannon Lundgren, R-Peosta, said. “We all, on a Sunday night, didn’t have to drive all the way there. (We) were able to go to our jobs Monday morning no problem, but still get our work done.”

“It will allow leadership to get more info out to the caucus sooner — probably not during session, but when we’re out — if there are items that need attention or for us to know about them,” he said.

Plus, Hein and Lundgren pointed out that any day the caucus doesn’t have to travel to Des Moines is a day when tax dollars don’t have to pay for it.

The Trump administration announced this week that it would ban some flavored e-cigarette pods and vaping produces. But menthol-flavored products, as well as any flavors in “open-tank” systems, would still be allowed.

U.S. Sen. Dick Durbin, D-Ill., has been a fierce critic of vaping, which has proven to be very popular with kids and teens. According to a release from Durbin last week, he told administration officials during a briefing that he would only commend a rule that led to less use by kids and set up a comprehensive plan to end nicotine addiction of kids already vaping.

“While today’s announcement is a step in the right direction, this policy still has a number of gaping holes,” Durbin said in the release. “For instance, we should be removing all e-cigarette flavors from the market – including menthol – as was promised four months ago. And we should not be exempting flavored nicotine products that kids can access in vape shops. There is simply no public health benefit to allowing cotton candy and gummy bear nicotine flavors to remain on vape shop shelves.”

The Library of Congress offers offices the ability to donate surplus books to schools, public libraries and qualified nonprofit institutions, according to a release. This marked the 56th Library of Congress book delivery Bustos has made in Illinois. Through those, she has delivered 2,800 books.