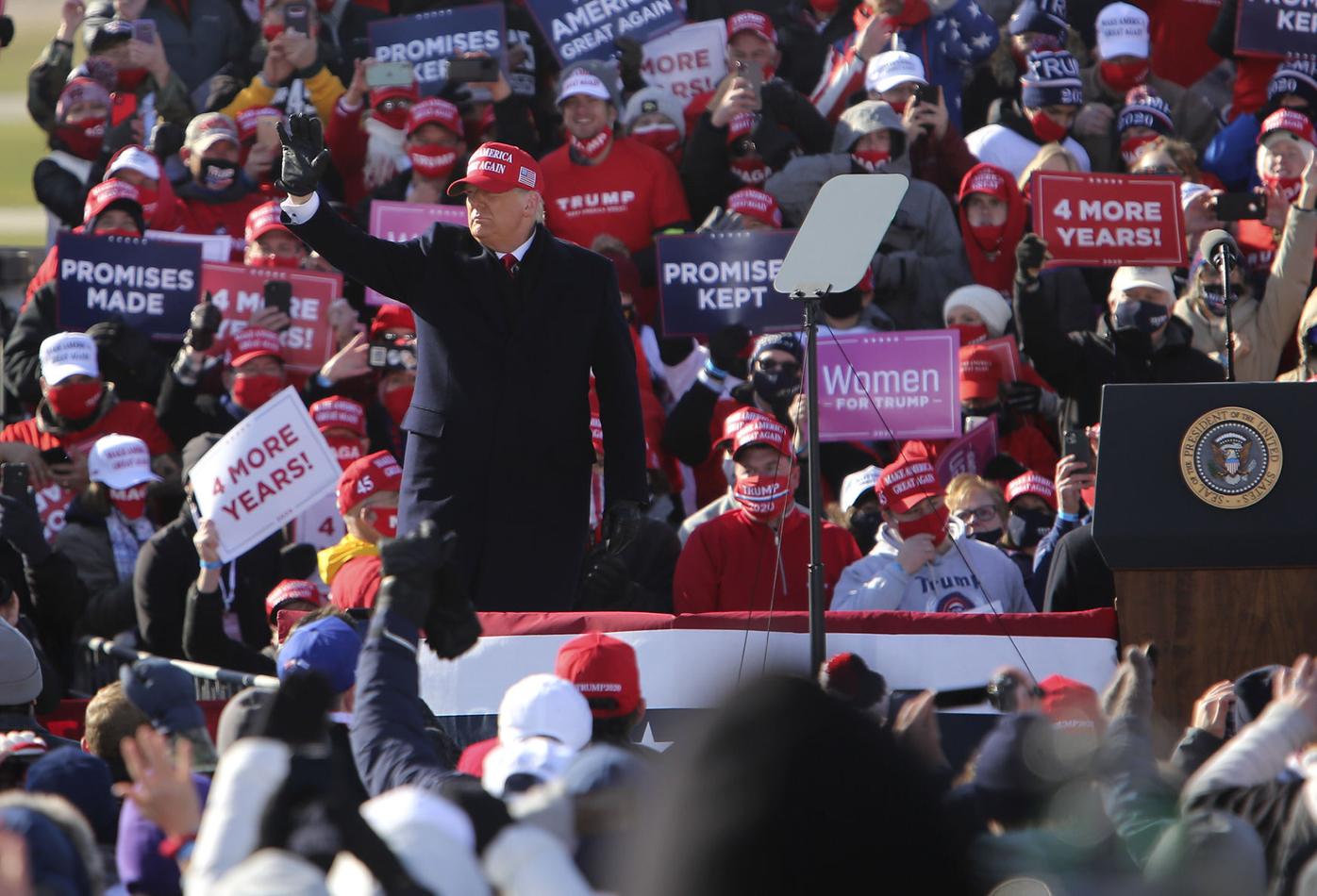 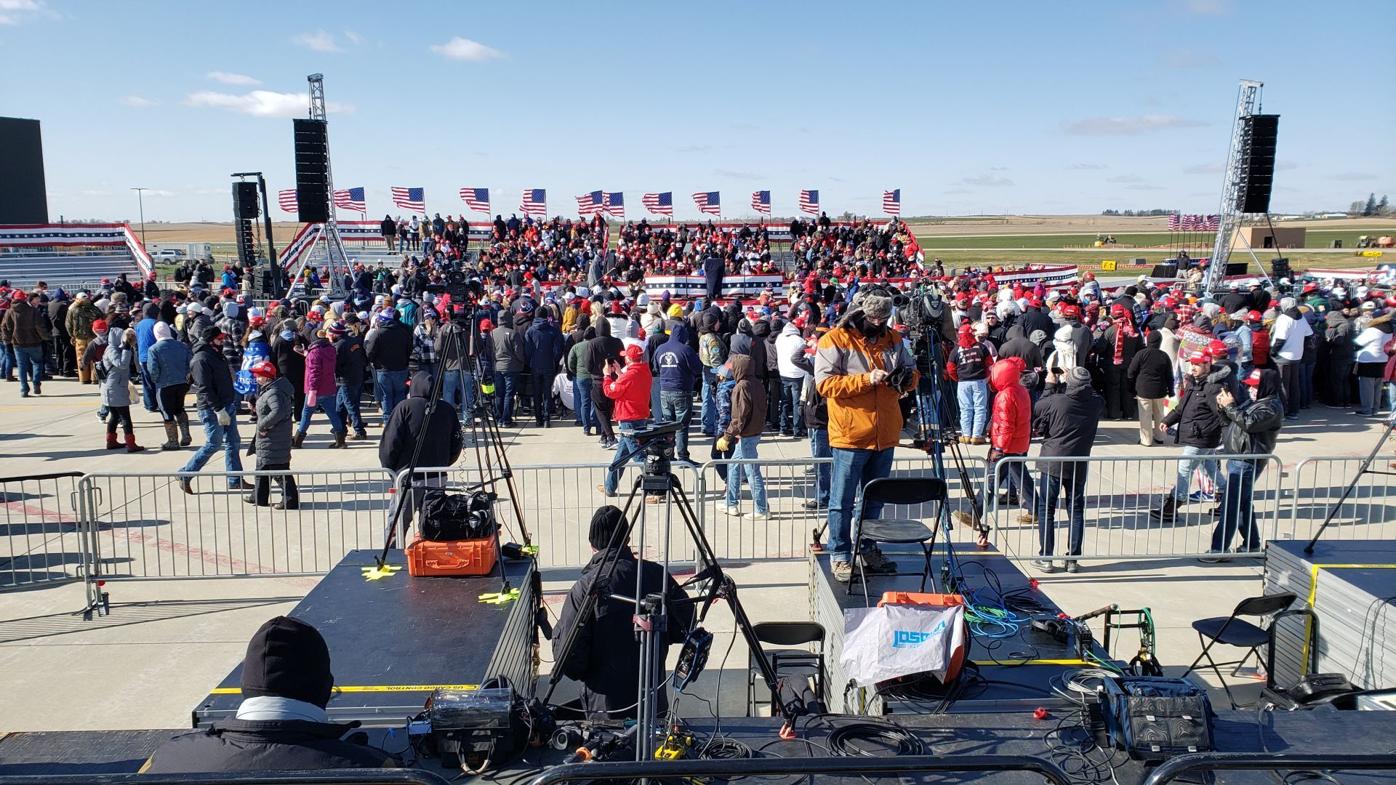 Hundreds of people fill the event space at the Dubuque Regional Airport late this morning, more than an hour before President Trump is scheduled to speak at a campaign rally about 1:15 p.m. 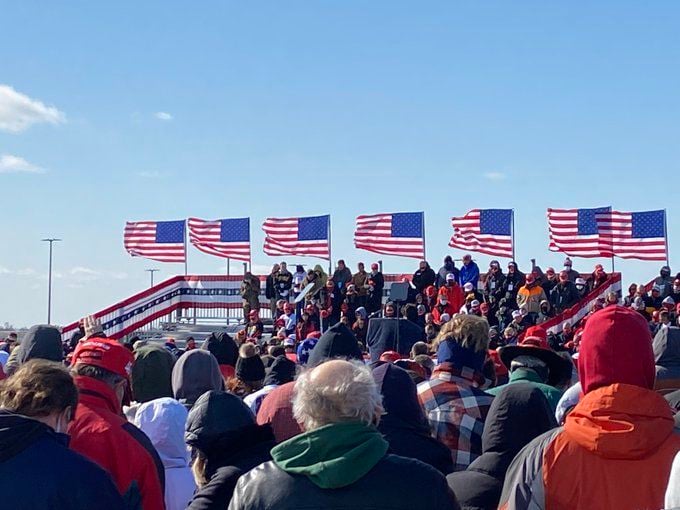 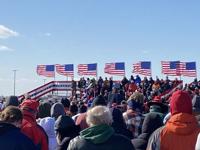 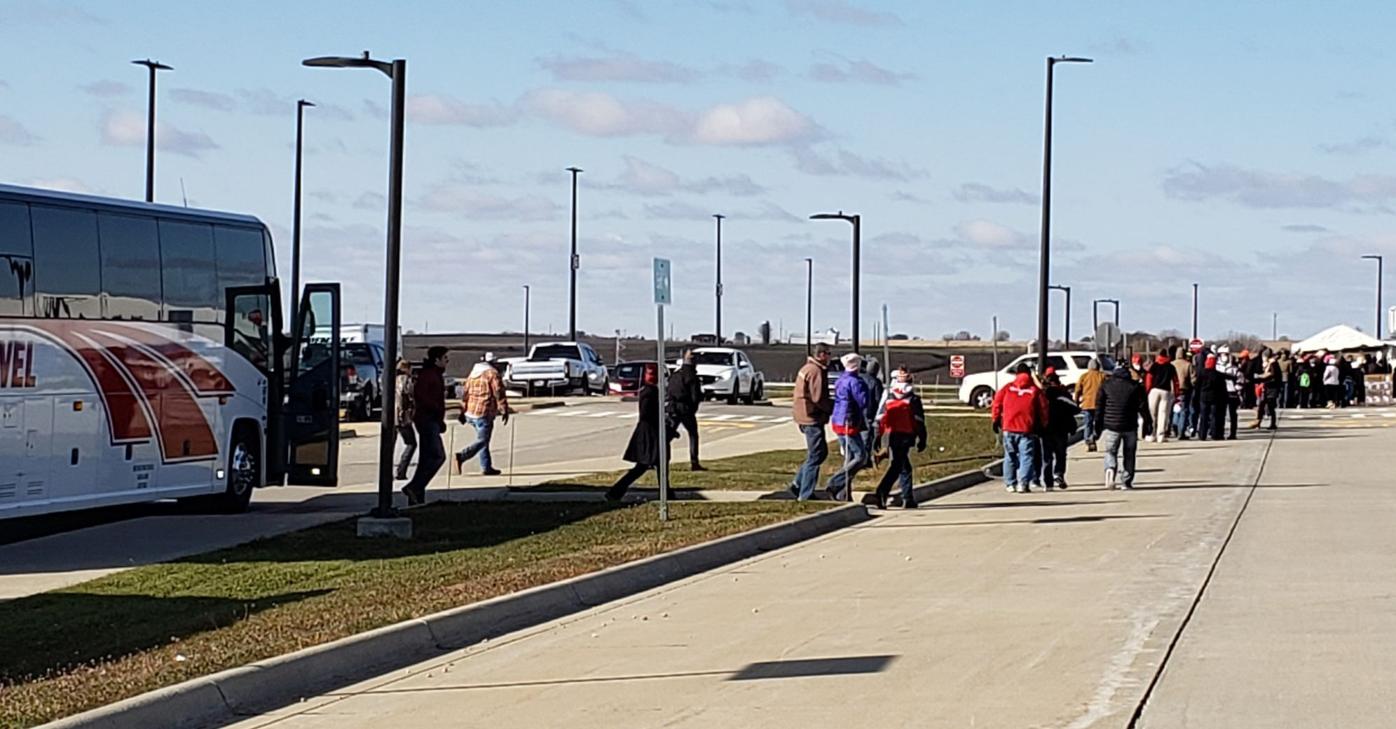 Lines had formed by mid-morning in advance of a visit by President Trump at the Dubuque Regional Airport. Police recommend take shuttles to the airport to avoid parking issues.

Hundreds of people fill the event space at the Dubuque Regional Airport late this morning, more than an hour before President Trump is scheduled to speak at a campaign rally about 1:15 p.m.

Lines had formed by mid-morning in advance of a visit by President Trump at the Dubuque Regional Airport. Police recommend take shuttles to the airport to avoid parking issues.

Trump closed with a rousing litany of American accomplishments throughout history, noting, "the best is yet to come."

Trump spoke for over an hour, ending at 2:55 p.m. with his trademark, "We are going to make America great again."

Coming back to the issue of COVID-19, Trump said "Vaccines are coming in a matter of weeks."

"We're rounding the corner," Trump said before the audience began chanting, "We love you."

"If I don't always play by the rules of Washington politics, it's because I'm not a politician. I've fought hard for you for four years," Trump said before rolling a video montage of former Vice President Joe Biden, including multiple references to working with China, and clips of Biden gaffes highlighted by Fox News.

Trump beckoned his daughter Ivanka Trump to the podium and stepped aside to let her say a few words. She championed his accomplishments of the last four years and vowed to continue the fight. "We're going to win another historic election. Go vote and God bless," Ivanka Trump said to cheers.

Trump championed the trade deals he established over the last four years, which brought an extra $28 billion to farmers, he said. "You got a good deal. You're here, you're happy and you're wealthy. No other president would have done that."

Trump couldn't help but comment on the wind gusting across the stage. "It's windy as hell up here," he said. "You're lucky you have a president who doesn't need a teleprompter, those things are useless in this wind, they're going 17 directions."

Trump predicts next year's economy will be "the greatest year in the history of our country."

This year was off to a good start before the COVID-19 pandemic struck, Trump said, referring to it as the "China plague." The mention of the virus elicited a boo from the crowd.

President Trump emerged from the plane at 1:40 p.m. wearing a black coat and and gloves against the chilly weather, along with his signature Make America Great Again cap. The crowd of more than 5,000 onlookers cheered and nearly everyone held a phone aloft, trying to capture the moment.

Air Force One has landed at the Dubuque Regional Airport to thousands for cheering supporters, awaiting remarks from President Trump.

Area Republican politicians, past and present, and candidates are out in force at the Trump rally at the Dubuque Regional Airport.

Hundreds have now taken their seats ahead of Trump’s arrival. License plates in the airport parking lot show attendees from Iowa, Wisconsin and Illinois, but also Michigan and Nebraska.

Rally staff are offering hand warmers as participants enter the site at the Dubuque Regional Airport for today’s presidential visit to Dubuque. With temperatures in the 30s and 22 mph winds, Trump supporters are bundled up against wind chills in the 20s.

Dubuque police are asking attendees of today’s visit by President Donald Trump to park in designated areas and take buses to Dubuque Regional Airport, the site of the president’s remarks.

Participants should park at Fifth and Adams streets or McAleece Park and Recreation Complex, according to Lt. Ted McClimon.

Buses from those locations will take people to the airport, McClimon said. Parking at the airport is limited.

“We have been hearing about showing up (this morning) and trying to park along the highway,” McClimon said. “That will be prohibited.”

The president's remarks are scheduled for 1:15 p.m. although reports from an event in Michigan indicate he might be running a bit behind.

Trump addressed a crowd of thousands, according to the Detroit News, at Total Sports Park in Washington Township this morning.

Following the Michigan stop, Trump is scheduled to head to Dubuque before continuing on to campaign stops in North Carolina, Georgia and Florida. The president is due to return to Michigan again on Monday for an evening event in Traverse City before closing the campaign at a Monday night rally in Grand Rapids, just as he did at the close of the 2016 campaign.