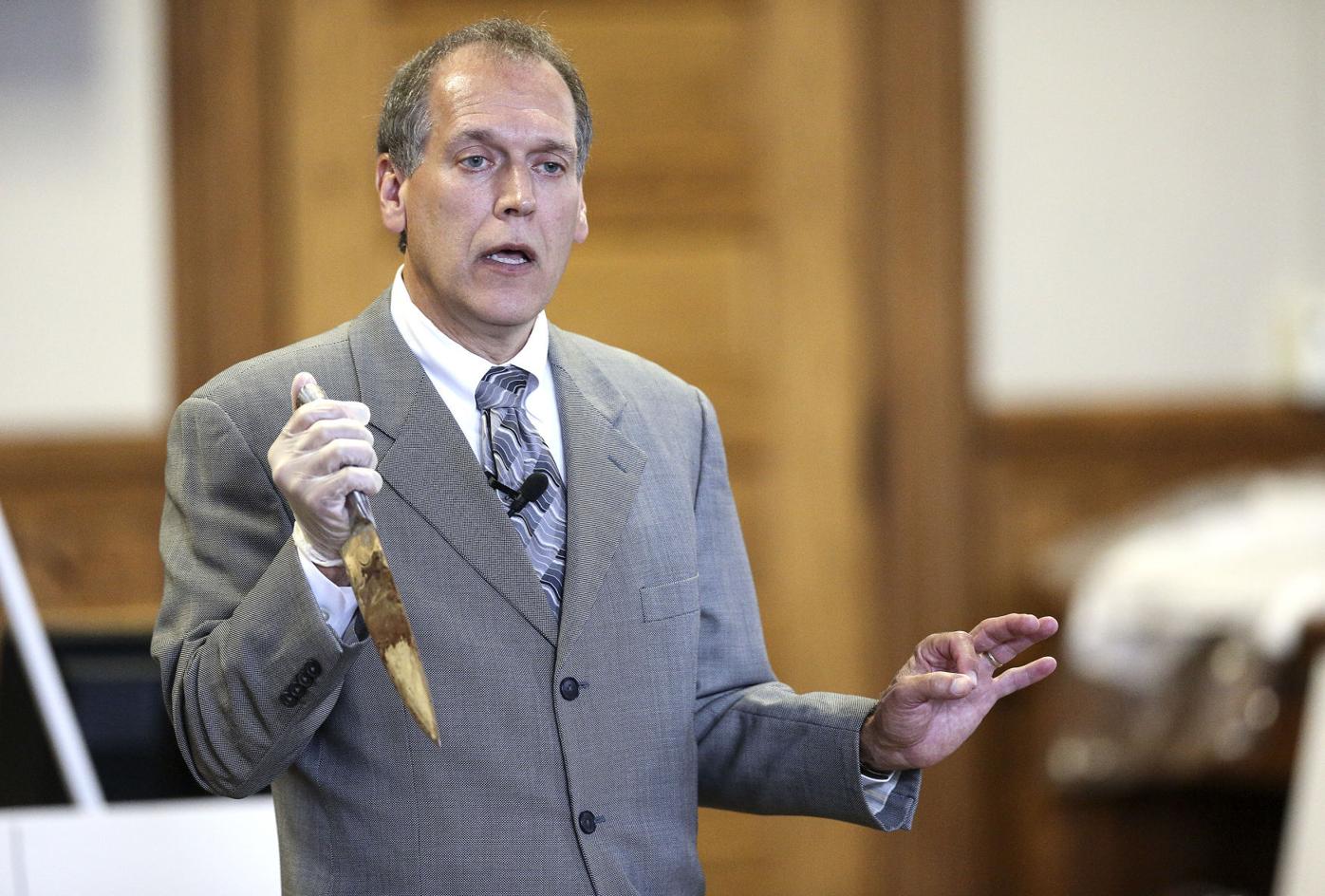 Douglas Hammerand, Iowa assistant attorney general, gives closing arguments during the trial of Fontae C. Buelow at the Clinton County Courthouse in Clinton on Monday, June 7, 2021. Buelow is accused of killing his girlfriend, Samantha Link, of Peosta, Iowa, on March 31, 2017. He is charged with second-degree murder. 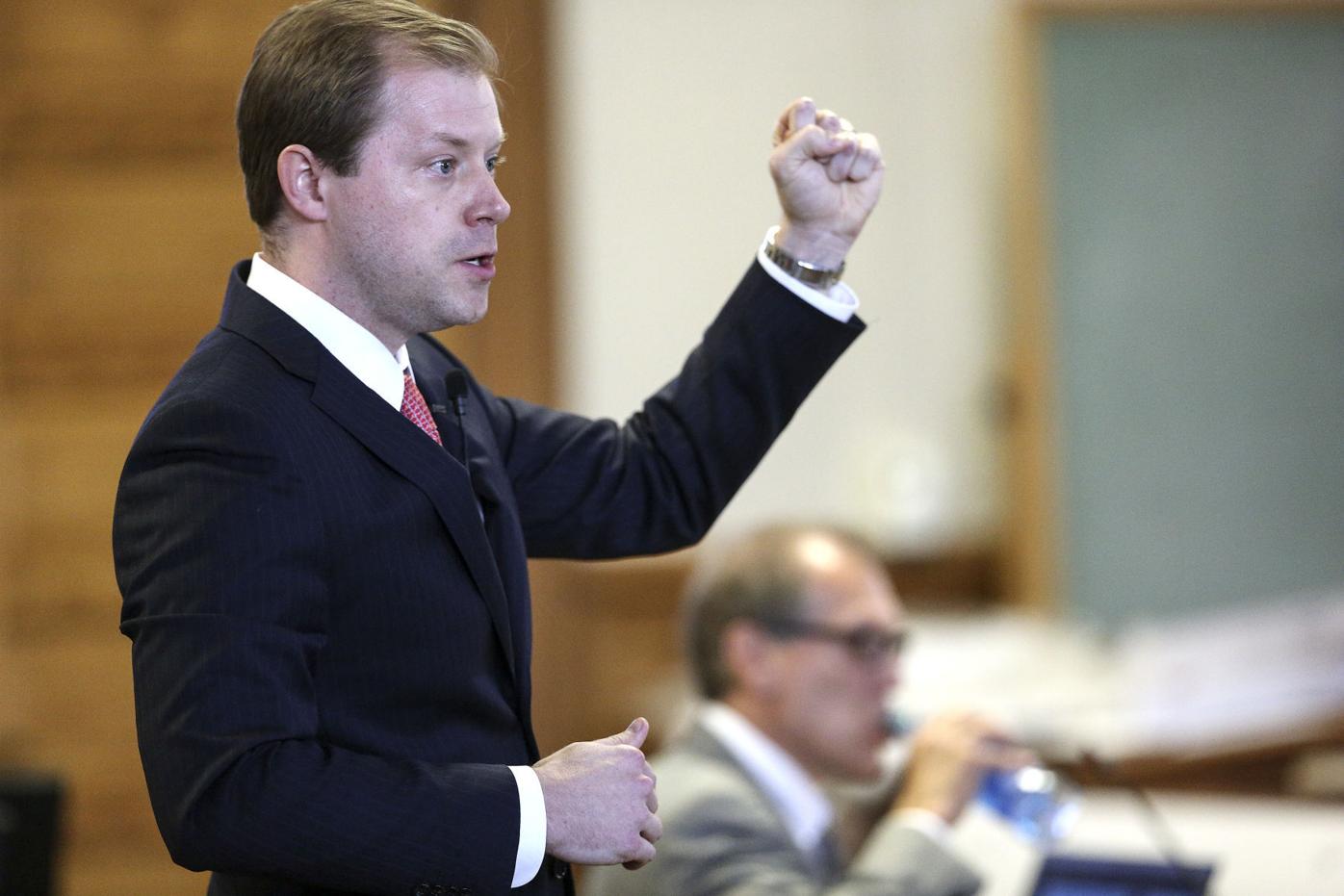 Defense attorney David Fautsch gives closing arguments during the trial of Fontae C. Buelow at the Clinton County Courthouse in Clinton on Monday, June 7, 2021. Buelow is accused of killing his girlfriend, Samantha Link, of Peosta, Iowa, on March 31, 2017. He is charged with second-degree murder.

Douglas Hammerand, Iowa assistant attorney general, gives closing arguments during the trial of Fontae C. Buelow at the Clinton County Courthouse in Clinton on Monday, June 7, 2021. Buelow is accused of killing his girlfriend, Samantha Link, of Peosta, Iowa, on March 31, 2017. He is charged with second-degree murder.

Defense attorney David Fautsch gives closing arguments during the trial of Fontae C. Buelow at the Clinton County Courthouse in Clinton on Monday, June 7, 2021. Buelow is accused of killing his girlfriend, Samantha Link, of Peosta, Iowa, on March 31, 2017. He is charged with second-degree murder.

CLINTON, Iowa — A jury is still deliberating in the trial of a Dubuque man accused of stabbing and killing his former girlfriend.

Closing arguments were delivered Monday in the trial of Fontae C. Buelow, 29, at the Clinton County Courthouse. He is accused of fatally stabbing Samantha J. Link, 21, of Peosta, Iowa, in his Dubuque residence on March 31, 2017.

The jury deliberated for about three and a half hours on Monday and will resume their discussions at 9 a.m. today.

Assistant Iowa Attorney General Douglas Hammerand continued to assert in his closing argument Monday that Link’s death was a homicide.

“The defendant plunged a knife into Sam’s chest three times,” he said. “One of those stab wounds was over 5 inches deep. That’s how vicious this attack was.”

Buelow previously was found guilty of second-degree murder in a 2018 trial, and he was sentenced to 50 years in prison. But last year, the Iowa Supreme Court upheld a state Court of Appeals ruling vacating Buelow’s prior conviction on that charge, granting him a new trial. The appeals court ruled that records on Link’s mental health struggles should not have been excluded as evidence in the initial trial.

The second trial is taking place in Clinton due to previous publicity in Dubuque County regarding the case.

In closing arguments, Hammerand showed the jury the video taken on Buelow’s phone just 10 minutes before Buelow called 911. Buelow tried to kick Link out of his house, then a struggle visibly ensued.

Hammerand said the struggle then moved from the basement to the kitchen, where Link was found dead. While there’s no way to know where Buelow and Link were standing, Hammerand said all of Link’s injuries were consistent with an attack.

Hammerand also said that multiple witnesses testified that they saw no indication that Link was feeling suicidal, including the psychiatrist who saw her less than 48 hours before her death.

But friends of the couple did testify about Buelow and Link’s fights when they were intoxicated, and the couple both had been drinking prior to Link’s death.

“There were problems between the defendant and Sam,” Hammerand said. “And like (Buelow’s roommate) Billy Kafar told you, the relationship could be toxic when they were drinking, and guess what folks? They were drinking that night.”

However, Fautsch noted that the jury already heard testimony stating that the bloodstains found on Buelow’s shirt and on the kitchen floor are more consistent with Buelow standing farther away from Link when she was stabbed.

He also noted the testimony heard about Link’s borderline personality disorder diagnosis and how those with the disorder are at a higher risk of suicide. Link had attempted suicide previously, according to her medical records.

Fautsch also noted that Buelow’s story never changed during the multiple times he was recorded telling law enforcement Link stabbed herself. He argued that if Buelow had been making up a story, some details likely would have changed with each retelling.

He also said there is no way of knowing who moved the knife that killed Link, but there’s no evidence Buelow touched it. The knife was found in the living room, adjacent to the kitchen where Link’s body was.

“If he was making something up, wouldn’t he place the knife in her hand to help himself out?” Fautsch asked the jury.

However, Hammerand told the jury to use their “common sense” that the knife only could have gotten to the living room by Buelow placing it there.

The video of Buelow kneeling alone in a police interrogation room, stating things such as “I’m so sorry” and “I never meant for this to happen,” also isn’t something that would happen if Link committed suicide, Hammerand said.

While Fautsch noted that a person could view the video as a sort of confession, he said Buelow was devastated by the traumatic event he witnessed.

“I believe wholeheartedly in my client’s cause, that the only appropriate verdict is not guilty,” Fautsch said. “... There is no case that causes me to lose sleep like this one.”

The Telegraph Herald will continue to cover the duration of the trial from inside the courtroom. Visit TelegraphHerald.com or the Telegraph Herald Twitter page, @telegraphherald, to read live updates. Stories also will be posted online and appear in upcoming print editions.