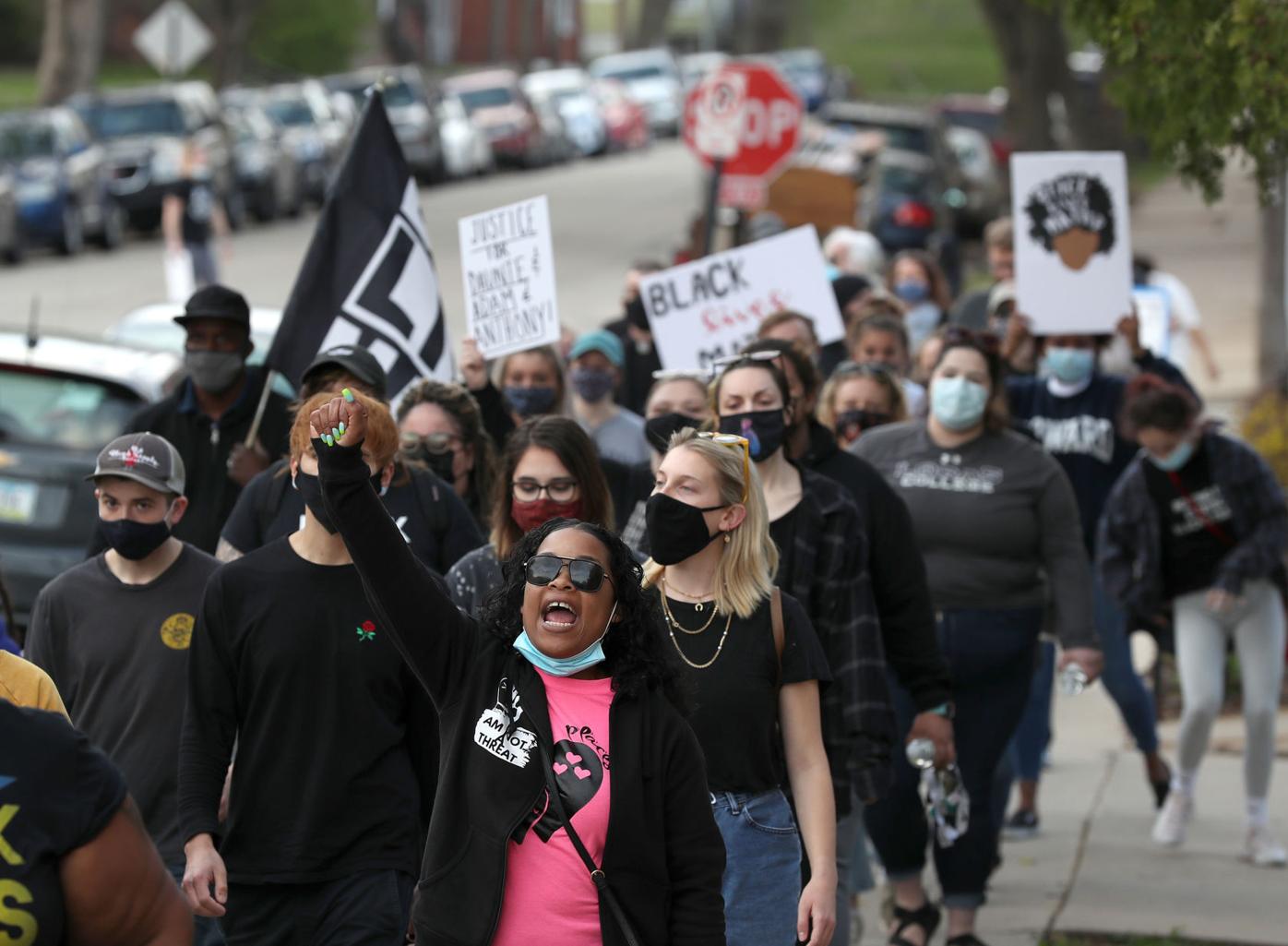 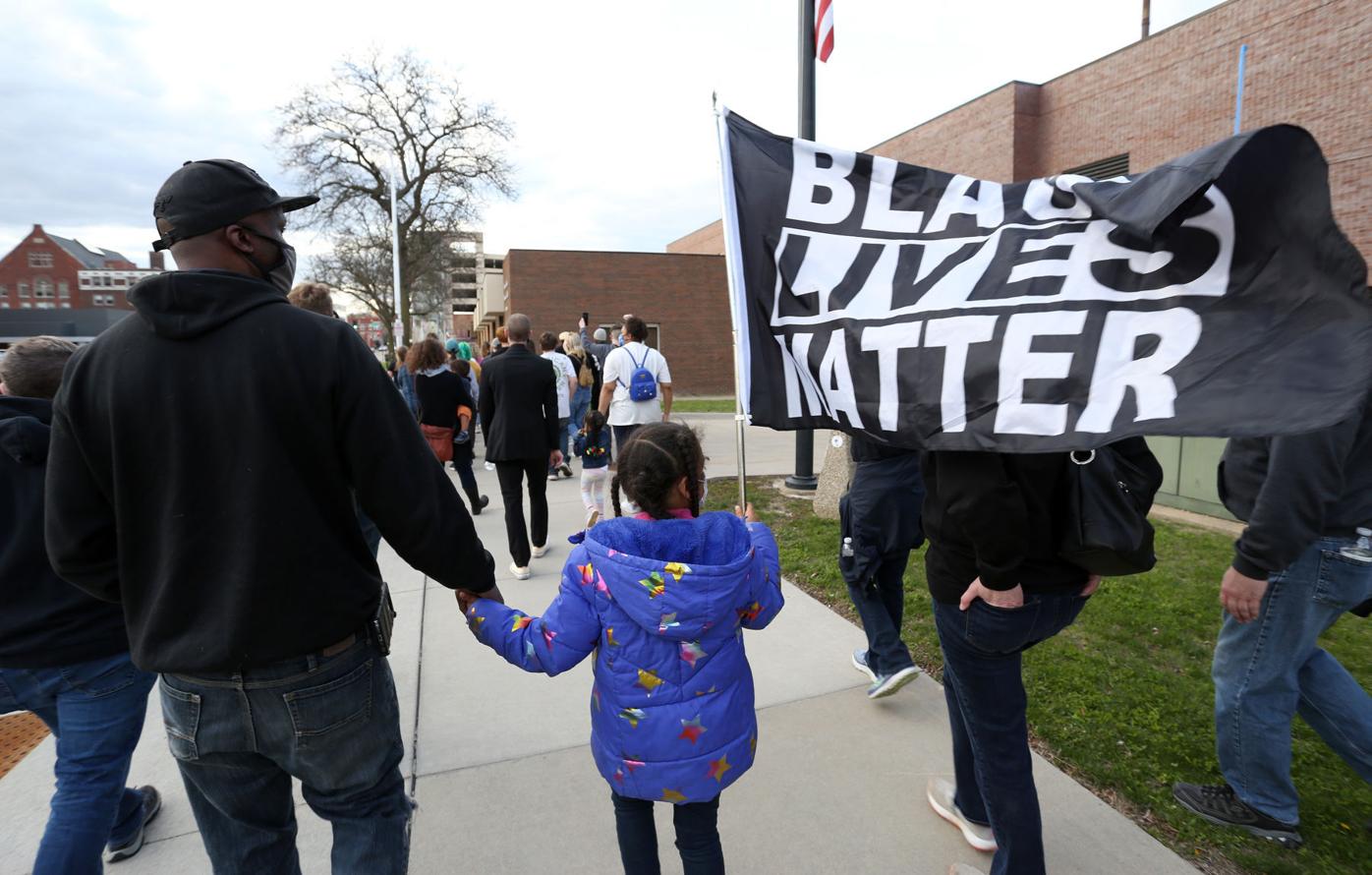 Myley Jones-Cherry carries a Black Lives Matter flag as her father holds her hand during the march. 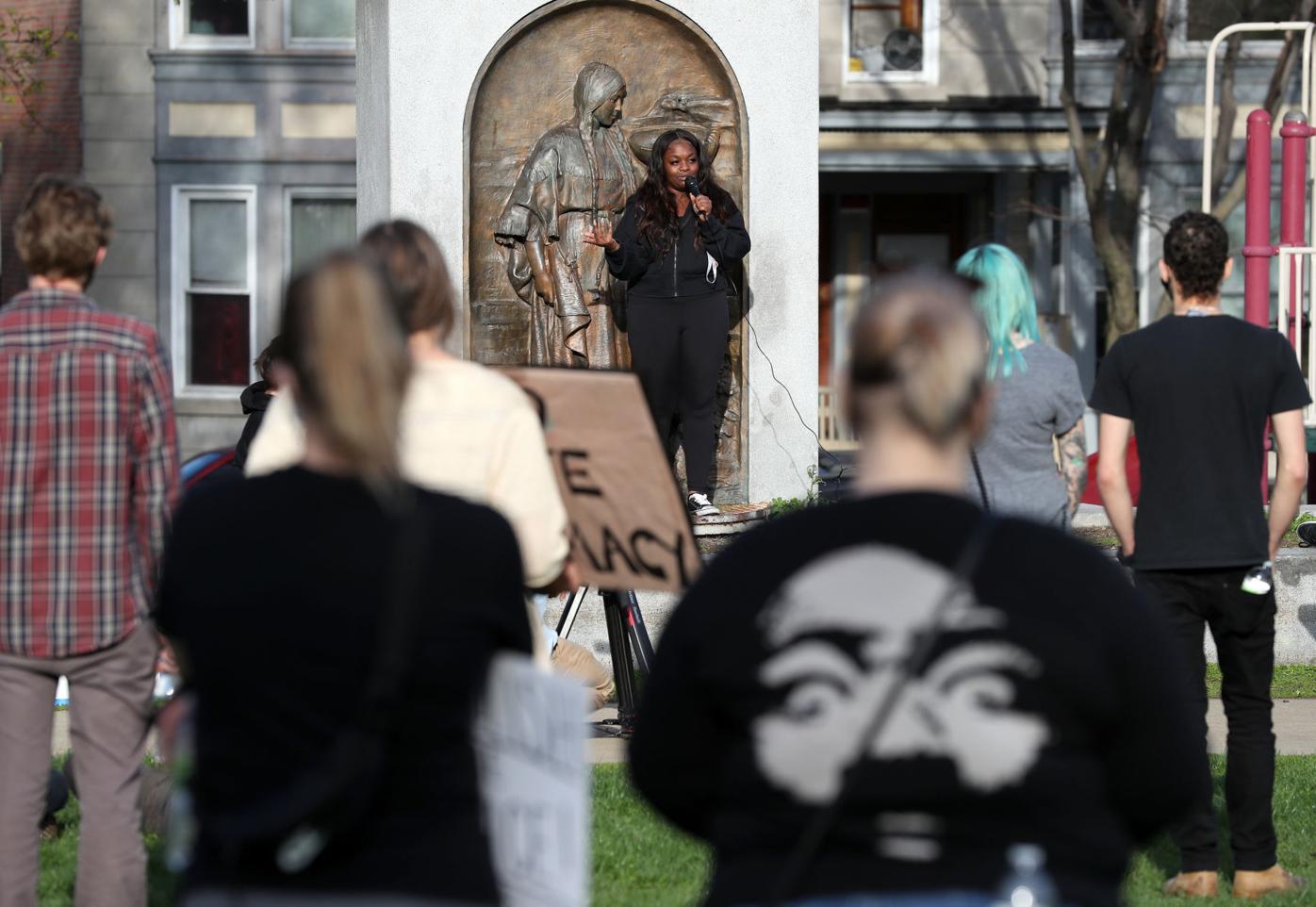 Jakyra Bryant speaks in Jackson Park during the Switching Places Foundation march in Dubuque on Friday. 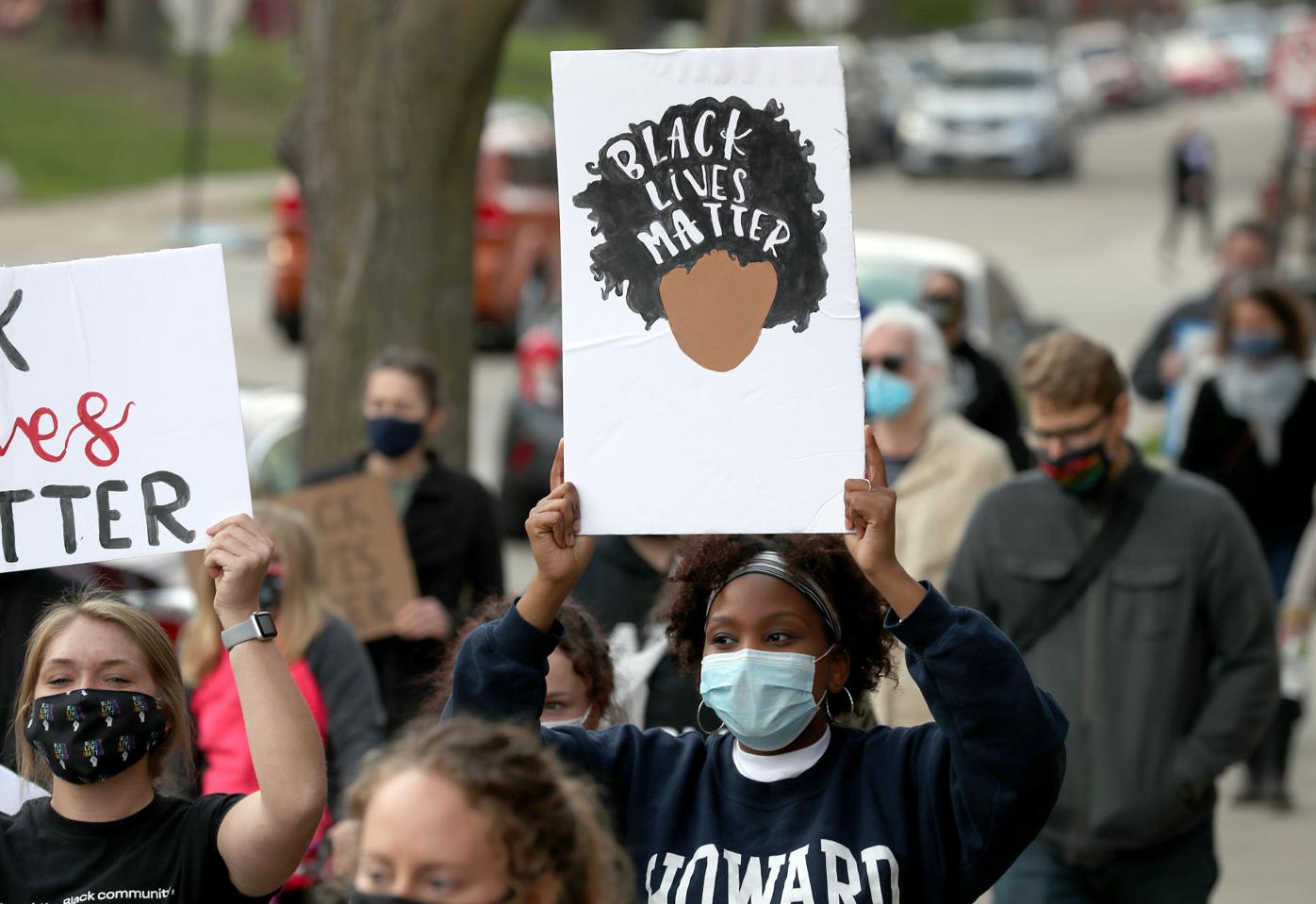 Participants hold signs and chant as the Switching Places Foundation march makes its way down Iowa Street towards the Dubuque Law Enforcement Center on Friday. 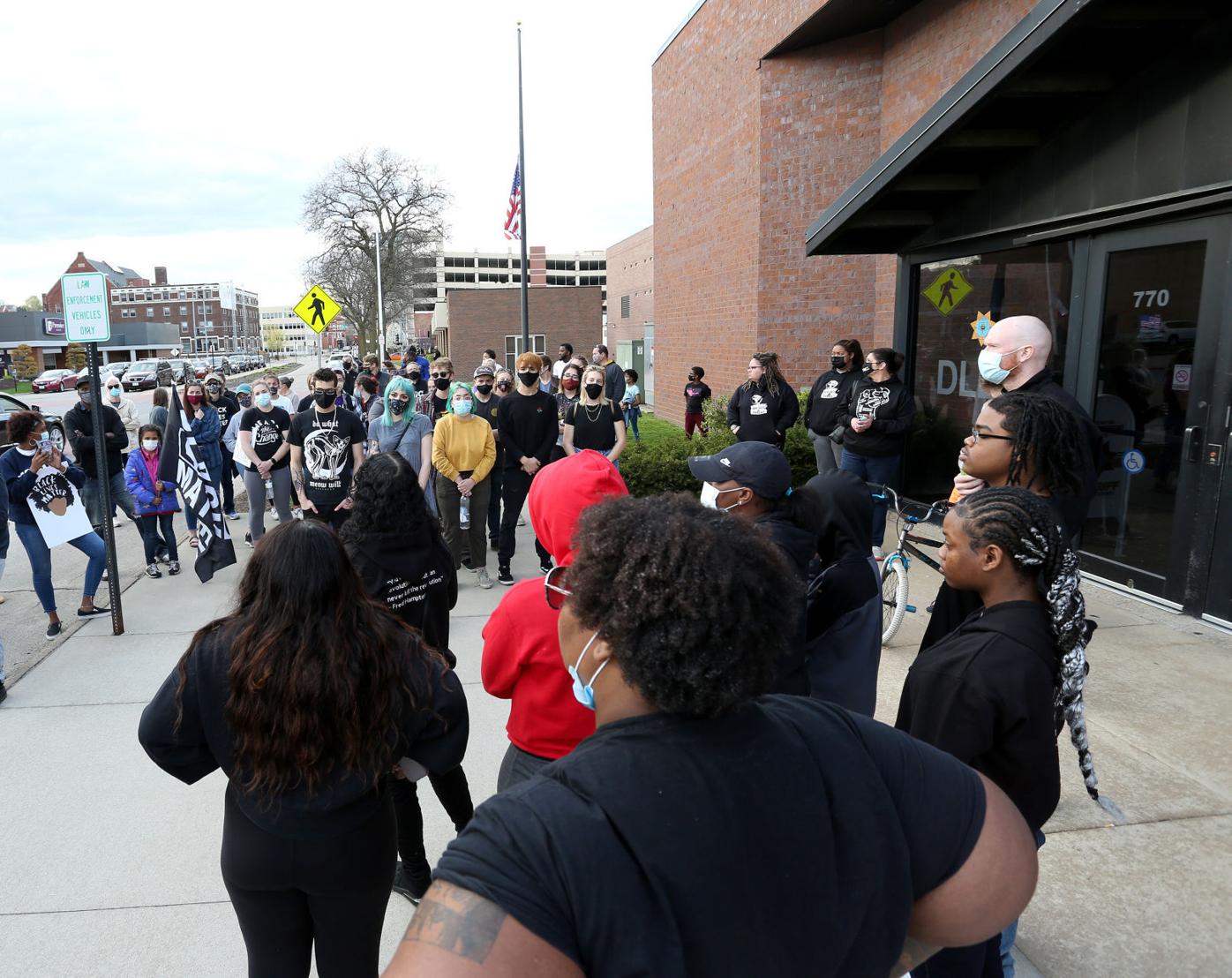 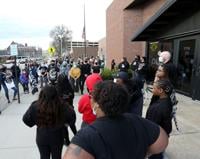 Organizers of the Switching Places march speak in front of the Dubuque Law Enforcement Center on Friday.

Myley Jones-Cherry carries a Black Lives Matter flag as her father holds her hand during the march.

Jakyra Bryant speaks in Jackson Park during the Switching Places Foundation march in Dubuque on Friday.

Participants hold signs and chant as the Switching Places Foundation march makes its way down Iowa Street towards the Dubuque Law Enforcement Center on Friday.

Organizers of the Switching Places march speak in front of the Dubuque Law Enforcement Center on Friday.

Shouts of “No justice, no peace” changed to “More justice, more peace” on Friday night on Iowa Street as about 50 people protested fatal shootings of Black Americans by law enforcement officers in the U.S.

“It’s just getting tiring,” said Dereka Williams, a co-founder of Switching Places Foundation and member of Queens for Peace. “... We know that, mostly overall, the Dubuque community wants to do the right thing, but the only way we can do that is by standing up and speaking out.”

Williams said plans for the march were sparked by the death of Daunte Wright, a Black man, who was shot Sunday by a White suburban Minneapolis police officer during a traffic stop. Officials have said former officer Kim Potter, who resigned after the incident, believed she had grabbed a taser instead of a gun. She has been charged with second-degree manslaughter in connection with the incident.

“I don’t think people understand that we’re dehumanized in society,” Williams told the crowd prior to the march. “We are not animals, but we are human beings. … If you want to mistake guns for tasers, take the guns away.”

Wright’s death occurred during the trial of former Minneapolis police officer Derek Chauvin, who is facing murder and manslaughter charges for his role in the death of George Floyd last May.

Floyd’s and Wright’s names were among those chanted by protesters, who yelled out names of Black people who have died after being shot by law enforcement officers.

Other members of the Switching Places Foundation spoke to the crowd prior to the march. Jakyra Bryant, a recent Loras College graduate, became emotional as she spoke about the number of Black people who have been shot by law enforcement officers.

She also mentioned the death of Chicago 13-year-old Adam Toledo, a Latino teen who was shot by police last month. Body camera footage released this week showed Toledo dropping a gun and raising his hands just before he was shot.

“It doesn’t matter where you come from or what you contribute to society,” Bryant said. “We matter.”

Earl Cherry, of Maquoketa, Iowa, brought a large Black Lives Matter flag to carry with him during the march. He told the crowd he has participated in several protests against racism and police brutality, but he stressed that protests can’t work without a call to action to change law enforcement practices.

“They always say, ‘It’s a few bad apples. Not all police officers are bad.’ And that’s true,” he said. “But when you begin examining that, you begin to see that there are no bad apples. The tree is spoiled.”

He said creating lasting change will take time, but people need to continue asking for better and educating the community on needed changes in the criminal justice system.

“We woke the sleeping giant; we don’t want to go back,” Cherry said. “I want us to be proactive, not reactive.”

Alyssa Corkery, a student at Loras, said she attended the protest to support the Black Lives Matter movement, noting that issues that disproportionately affect people of color, such as housing equity, are present in Dubuque.

“What we’re seeing on a national scale, Dubuque is not exempt from,” she said.

Emma Steider, of Dubuque, also said she came to the protest to support the movement and thinks bringing awareness to the issue is key.

“This is not a joke. This is real,” she said. “Accidents shouldn’t have to take lives.”

Dubuque Police Chief Mark Dalsing told the Telegraph Herald following the event that the police department is always proud to protect First Amendment rights and helped block traffic for the protesters as they marched as it normally would do.

“They’re a group of people speaking out on an important topic, and we’re glad to support their efforts,” he said.

VIDEO: "I am not a threat" march