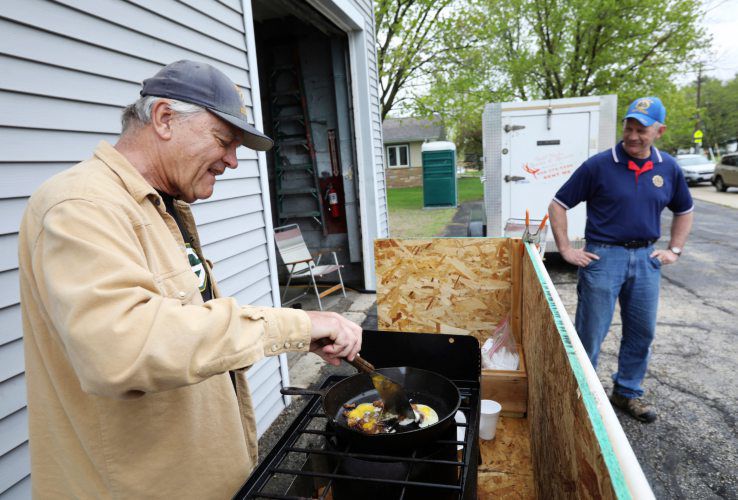 Ron Machotka fries up a batch of morel mushrooms in a pan with butter recently at a stand in Muscoda, Wis. The morel stand is operated by the local American Legion post and located on a former used car lot where the Legion buys and sells morel mushrooms as part of a fundraiser. 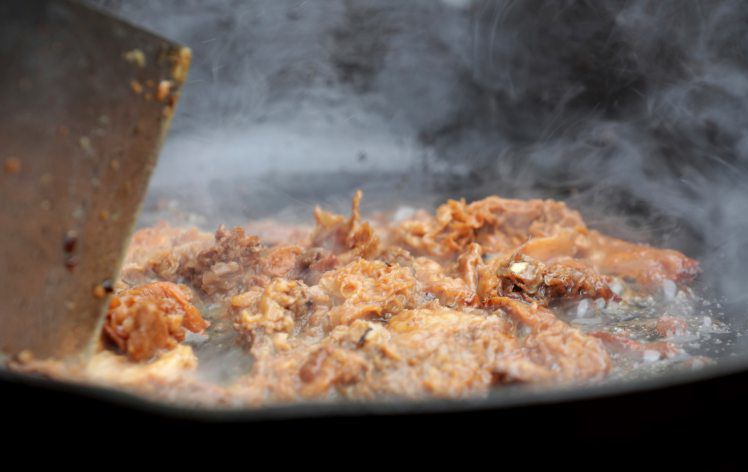 Machotka cooks morel mushrooms, frozen from last year, as he waits for customers.

Ron Machotka fries up a batch of morel mushrooms in a pan with butter recently at a stand in Muscoda, Wis. The morel stand is operated by the local American Legion post and located on a former used car lot where the Legion buys and sells morel mushrooms as part of a fundraiser.

Machotka cooks morel mushrooms, frozen from last year, as he waits for customers.

MUSCODA, Wis. — The rectangular wooden block is a little bit bigger than a deck of cards.

The idea is to blow through the hole at one end to make a sound that is inaudible to the human ear but wakes a slumbering morel mushroom.

Use it in the right spot, and the tasty and much-sought-after fungus will emerge from the forest floor.

“Of course it works,” Ron Machotka said of his homemade, magical contraption. “They just pop up something terrible. Just don’t blow it in your car because then they’ll start growing underneath your seat and you won’t find them right away.”

Of course, Machotka’s mushroom call is a gimmick and is ignored by the secretive spores, although he has sold quite a few of the $3 calls over the past 10 years as a novelty item during the annual Muscoda Morel Mushroom Festival. But these are desperate times for Machotka and his buddies at Leslie J. Lee American Legion Post 85.

The festival, which should have been held this month, was canceled due to COVID-19 concerns. An usually dry and cool spring has kept much of this year’s morel crop in hiding. And that’s bad news for the Legion, which buys and sells mushrooms this time of the year as part of its fundraising efforts that support the local baseball team and Badger Boys State and are used to buy the American flags that line the village’s main drag.

When we arrived at the Legion’s stand, set up on a former used car lot on a recent Thursday morning, the organization had taken in only 20 pounds of morels from local pickers for the entire season. Normally, by this time of the year, the Legion would have taken in 800 to 900 pounds of morels.

“I can’t say I’ve ever had a year like this in the 12 years I’ve been doing it,” said Tom Nondorf, who organizes the annual fundraiser. “I could easily move 1,100 pounds right now because the phone is ringing nonstop with people wanting to buy. But my customers that bring them in, the ones that bring in 20 to 30 pounds at a time, ain’t showing up.”

The calls come from Iowa, Indiana, Illinois and throughout Wisconsin.

But Nondorf’s biggest buy this season from one picker has been just over 2 pounds, and it hasn’t even paid to fire up the portable beer cooler trailer that is normally used for temporary storage. When Nondorf opened the stand on that Thursday morning, three people were waiting to buy morels. He quickly sold out of the 2 pounds he had on hand from the previous day. The mushrooms that Machotka fried up in butter with eggs that day were from the previous season and had been frozen in sealed plastic bags for the past year.

Despite their age, the morels still had a fantastic smell and taste.

“I didn’t put any salt and pepper on these,” Machotka said as he handed over a paper plate with steaming eggs and morels. “You have to do that yourself.”

The spring fundraiser is a big deal for the Legion and is a $30,000 endeavor. The Legion buys mushrooms for $20 a pound and sells them for $35 per pound. In most years, that means buying and selling around 1,200 pounds of mushrooms, which nets about a $5,000 to $6,000 profit. Besides the wholesale operation, the Legion has also sold during the festival pudding-cup-size servings of sauteed mushrooms for $8 a cup. The delicacy draws hundreds of morel-hankering eaters and adds to the Legion’s bottom line as the crew fries up 300 to 400 pounds.

“They’ll be lined up down the street,” Nondorf said. “It’s unbelievable. But it’s a full cup.”

Morchella esculenta has been found in all 50 states, but the Midwest is a prime location for the spongelike mushroom.

Only the mad disclose their favorite spots. That’s why the posts on the Wisconsin Morel Mushroom Hunters Facebook page are purposefully vague. Michele Brown Schultz recently posted eight photos of morels she found in Crawford County after four hours of searching.

“Well, not getting skunked but still slim pickins,” she wrote.

Other posts came in from Dane, Polk, Shawano, Outagamie and Waukesha counties.