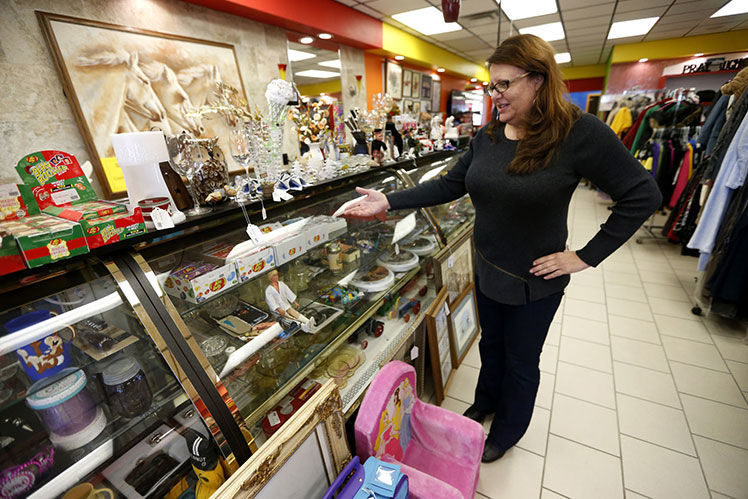 Julie Heiderscheit, owner of Never Know Shoppe in Dyersville, Iowa, shows off some of the items available at her consignment store.

Biz Buzz shares business tidbits from around the tri-state area. This week, we highlight developments in Dubuque, Dyersville and Marquette, Iowa.

DYERSVILLE, Iowa — At a new Dyersville business, the name tells a big part of the story.

Never Know Shoppe opened its doors at 6131/2 16th Ave. SE in the final week of October, according to owner Julie Heiderscheit. The business sells a wide variety of new and resale items, with much of the inventory sold on a consignment basis.

For those looking to sell their goods, as well as customers looking for unique finds, Heiderscheit believes the store’s moniker sums up what the new business has to offer.

The business represents a new challenge for its owner, who previously served as president and CEO of Hillcrest Family Services.

Heiderscheit noted that owning her first business has been “a learning experience.” With just two part-time workers rounding out her staff, operating the shop means logging some long hours and mastering a wide variety of tasks.

Despite these challenges, Heiderscheit has found joy in running the new business.

She noted that she has lived in Dyersville for seven years, but worked in Dubuque for that entire span. Now that she’s spending more time in her community, she’s forging a closer connection with others in town.

“I feel like I am interacting a lot more with the people in Dyersville and getting to know the community so much better,” she said. “That has been an awesome part of this.”

Never Know Shoppe is open from 10 a.m. to 6 p.m. Monday through Friday and 10 a.m. to 4 p.m. Saturday. It is closed Sunday. Heiderscheit the business also is open by appointment for consignors.

“Our vision at this point is to provide both a sportsbook area in the casino as well as usage of a mobile app for convenience of our guests,” White wrote in an email to the Telegraph Herald.

White confirmed that the Iowa Racing & Gaming Commission recently approved a sports gambling license for Casino Queen. Casino Queen was the last of Iowa’s 19 licensed casinos to apply for such a license.

A pair of casinos in Dubuque have been operating sportsbooks for months. Q Casino and Hotel launched its sports-betting operation in late August, and Diamond Jo Casino launched its own sportsbook in early September.

The new offering has been a hit thus far in Dubuque.

The sports betting handle — or amount wagered — at Diamond Jo was nearly $1.2 million in October. Q Sportsbook reported a handle of about $867,000 that month.

Casino officials in Dubuque have reported that the addition of sports gambling has attracted a younger demographic that normally doesn’t frequent the casino. White indicated that Casino Queen is hoping to see a similar boost.

“With the addition of sports betting we are looking to attract the non-traditional gambler to Casino Queen,” she wrote.

Officials from a popular national drive-in restaurant chain still plan to open a location in Dubuque, although it’s unclear when.

Officials with Sonic Drive-In announced in early August that they planned to open a restaurant in Dubuque’s Plaza 20. However, construction crews have yet to begin work on the facility, which will be located near Harbor Freight Tools.

Sonic officials took to social media over the weekend to confirm they are still set on coming to Dubuque.

“We are absolutely bringing a Sonic to Dubuque,” the post stated. “We are still awaiting approval to break ground and, as soon as the city approves, we will break ground and be open about 12 weeks after.”

The post noted that Sonic officials have “had lots and lots of people inquire” about the status of the restaurant.

Reached by the Telegraph Herald on Saturday, franchisee Luke Flatin declined to comment further on plans for the eatery.

In August, he told the Telegraph Herald that the dine-in area would seat 66 people and that the patio would be heated, covered and capable of seating 30.