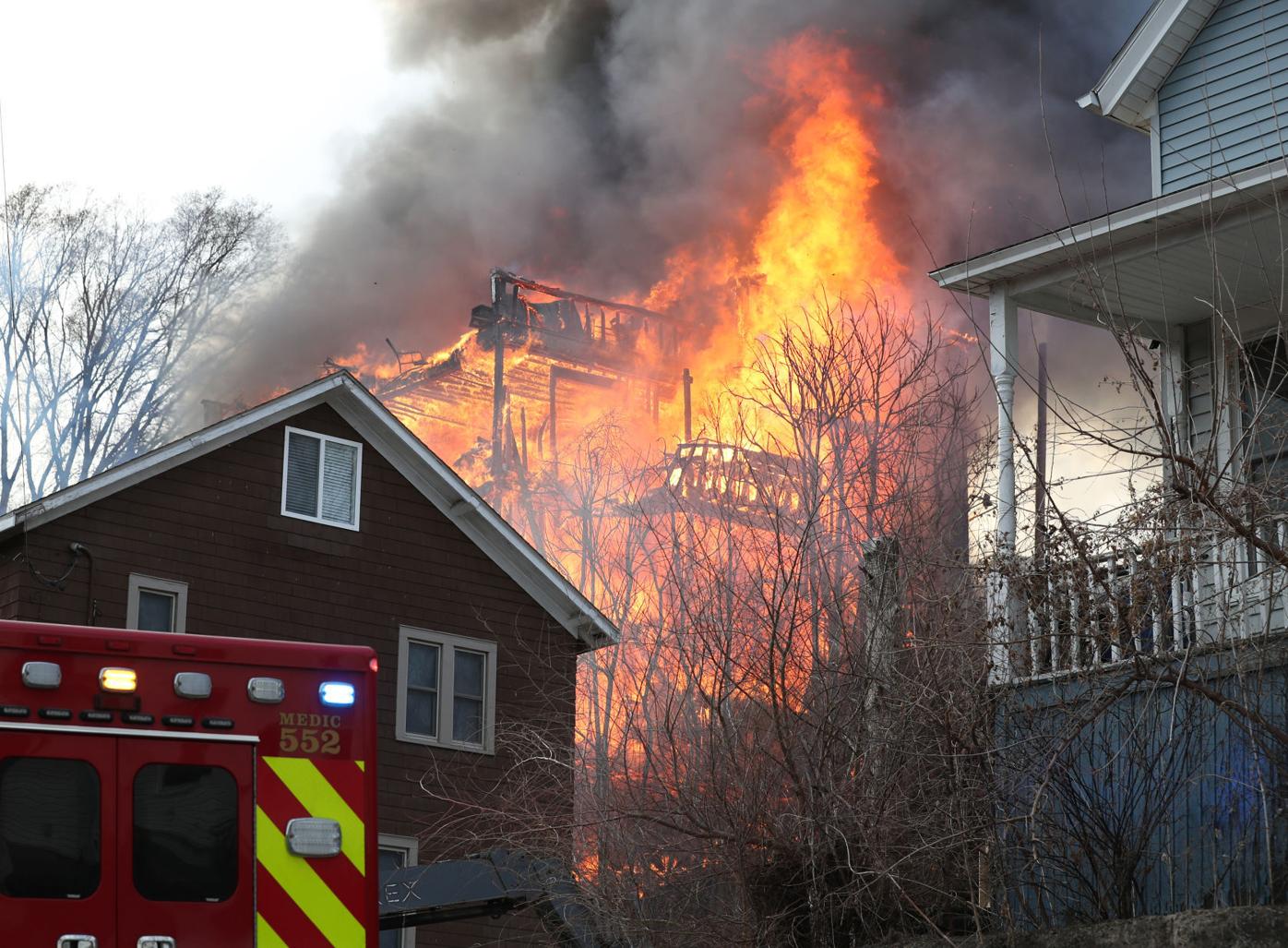 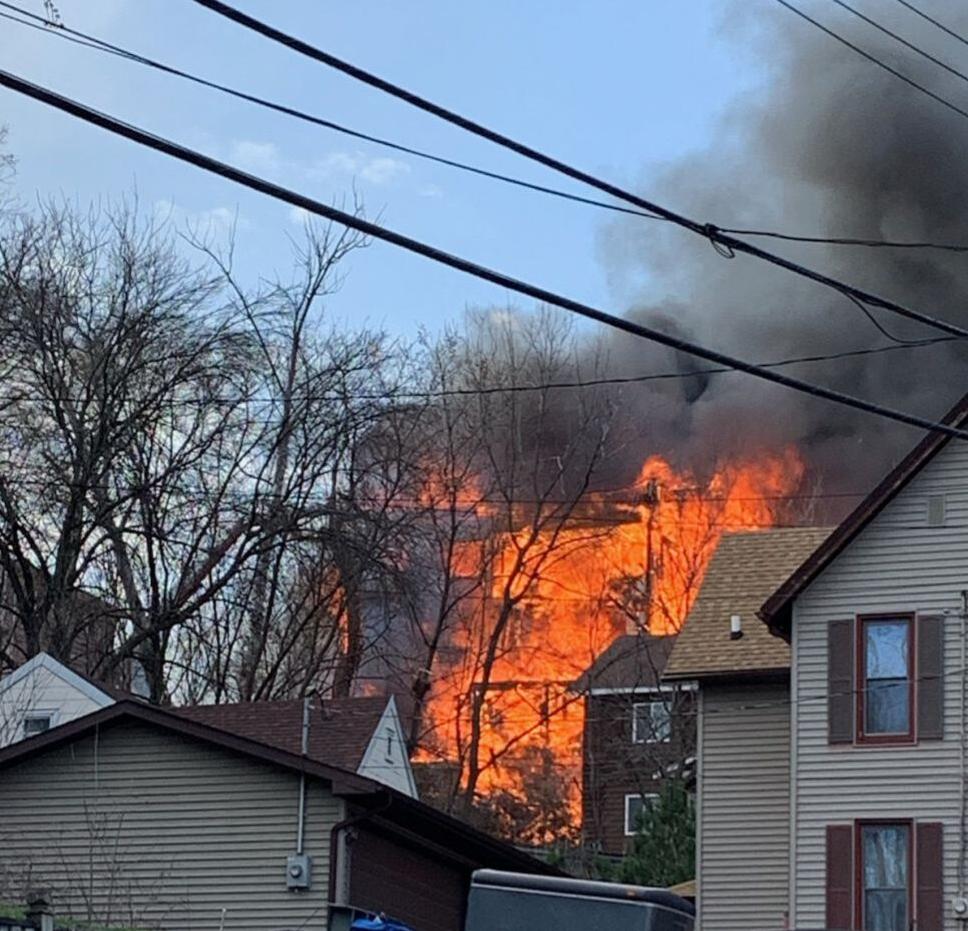 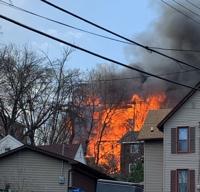 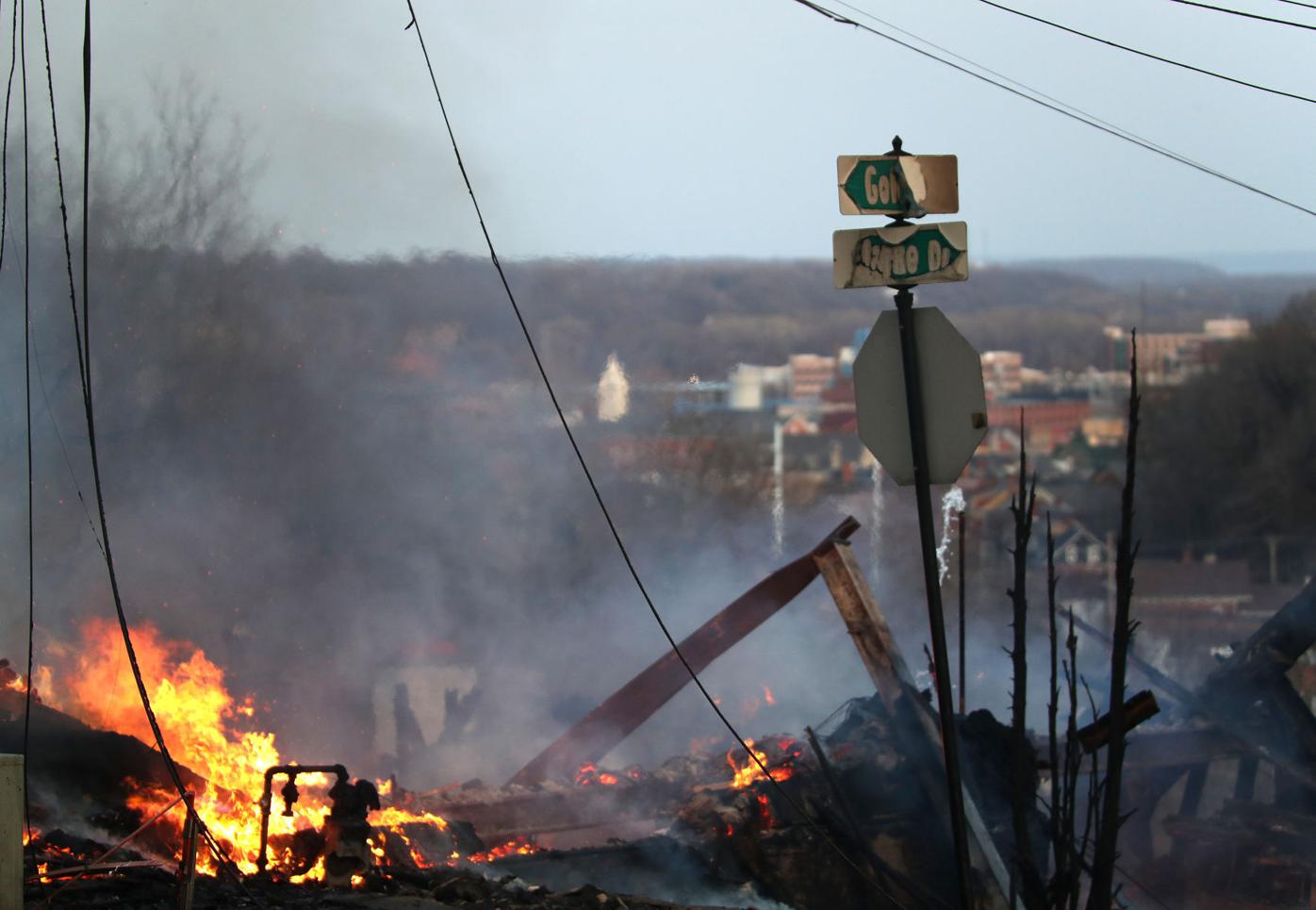 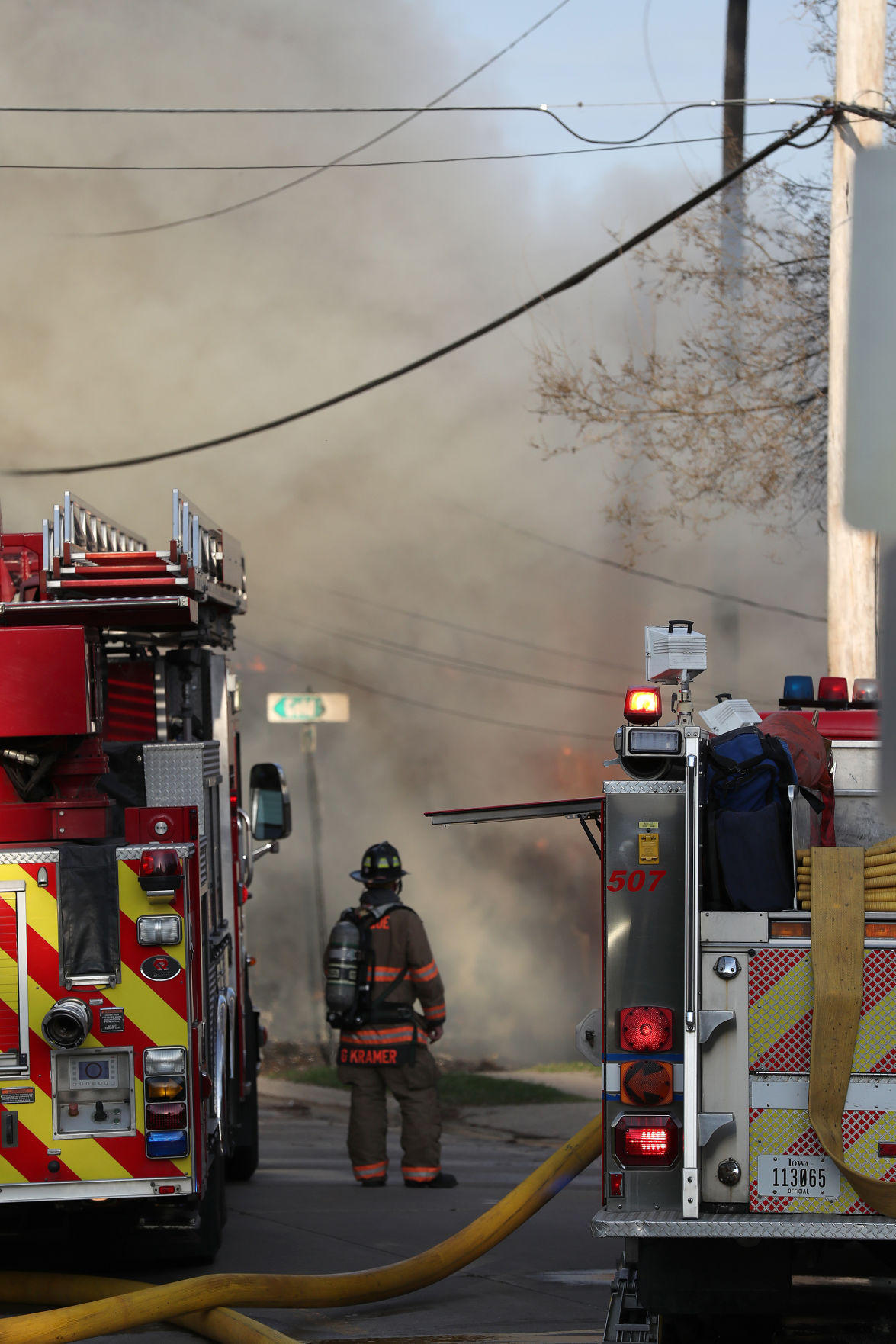 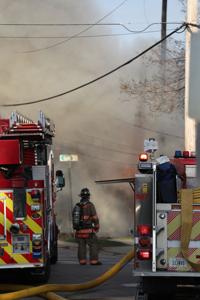 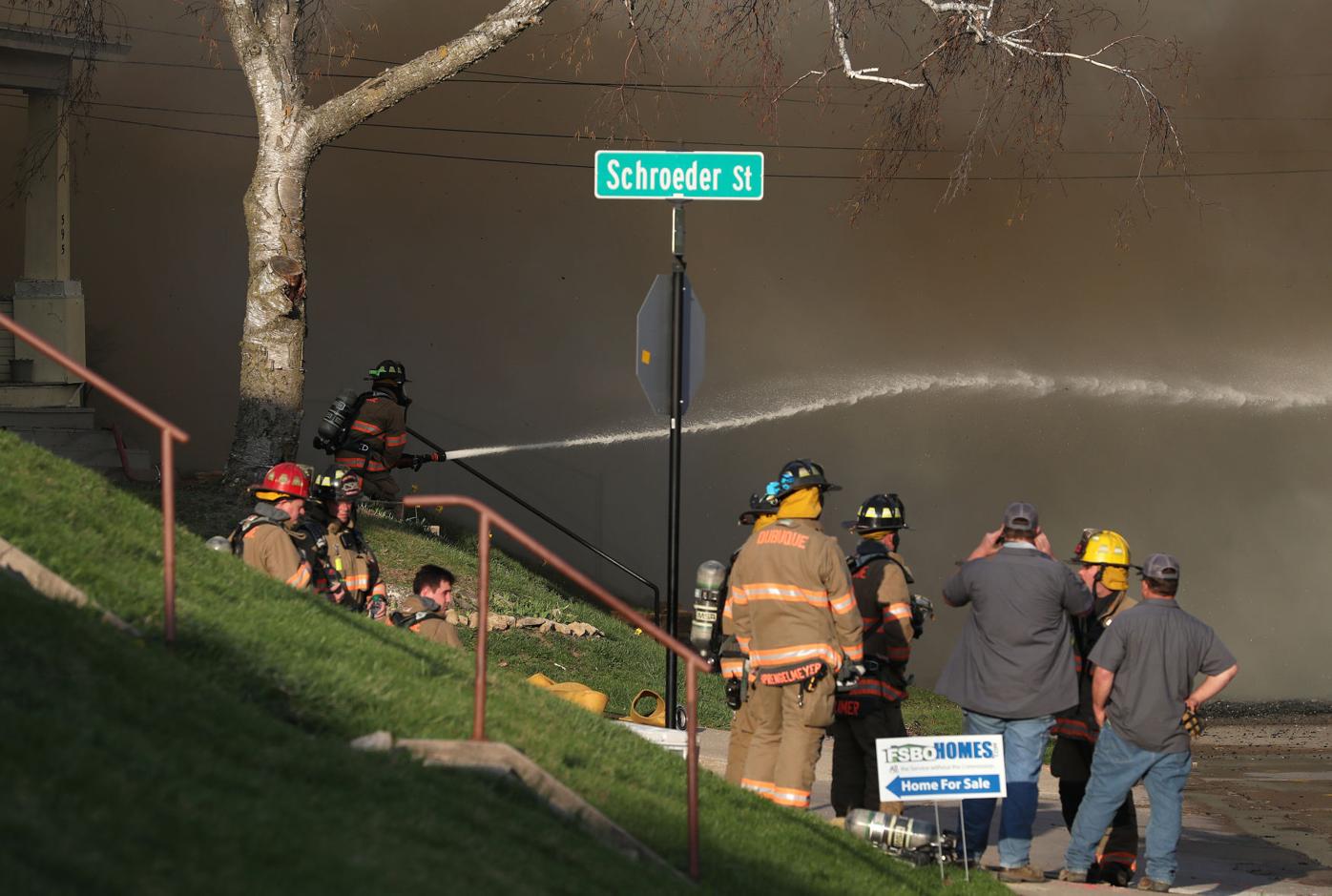 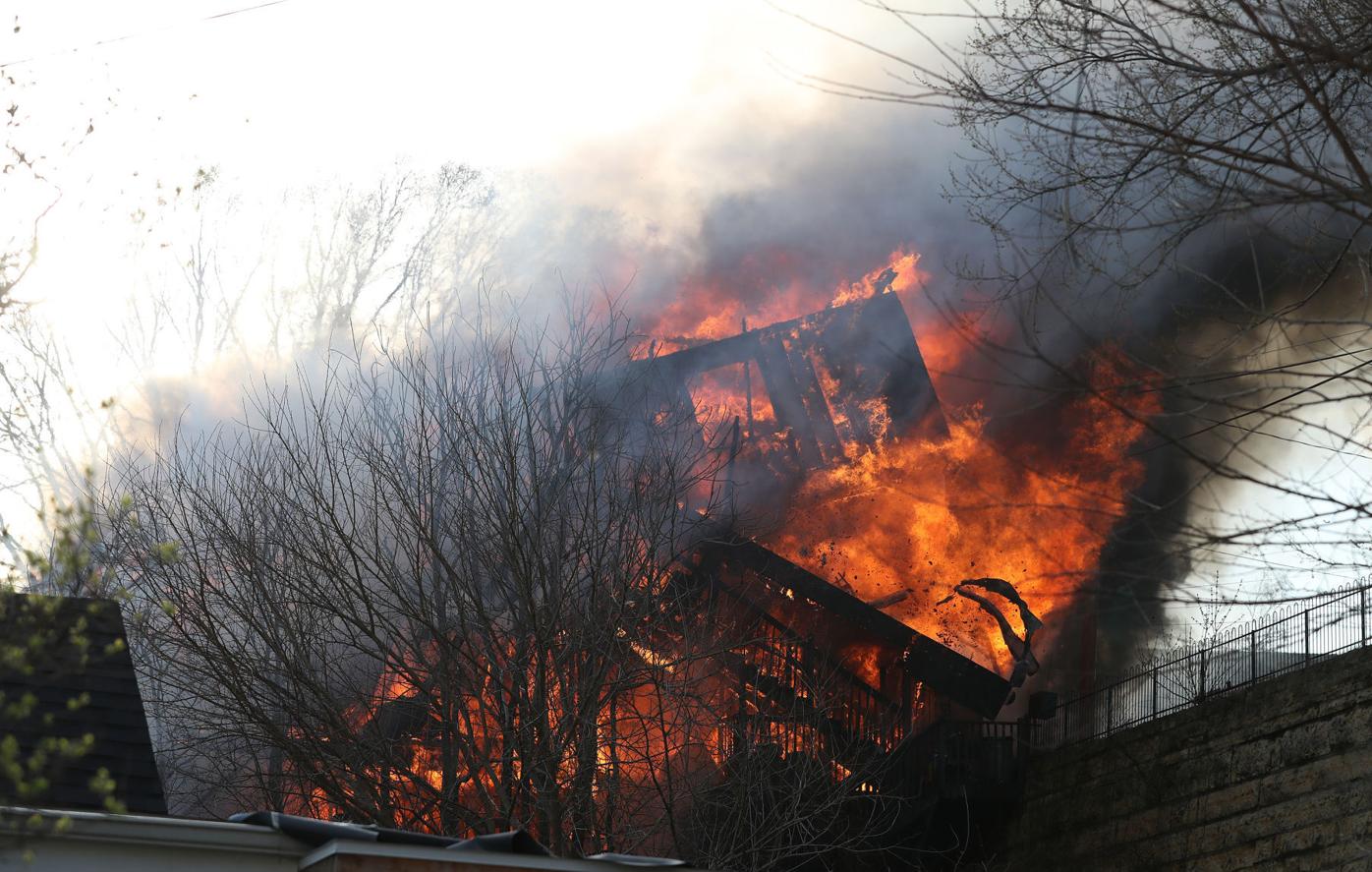 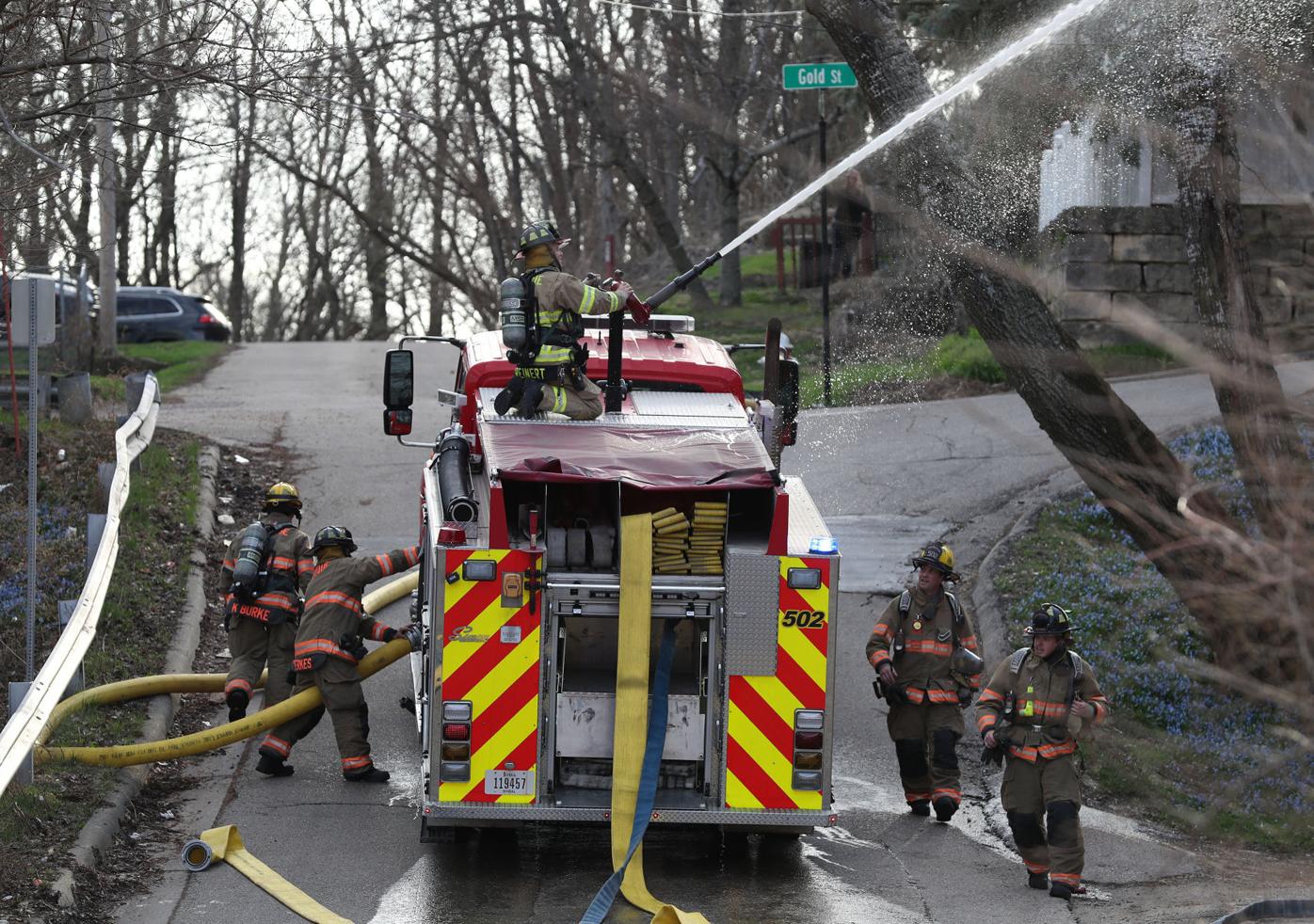 A Dubuque residence is considered a total loss following a massive blaze on Monday evening, though no injuries were reported.

Firefighters responded at about 5:30 p.m. to a structure fire at 590 Clarke Drive, said Dubuque Assistant Fire Chief Cal Motsch. The building was heavily involved when they arrived.

Shortly before 6 p.m., the structure was fully engulfed in flames, with black smoke billowing into the sky. Portions of the charred building started to collapse as firefighters sprayed down the structure.

"We had heavy fire and smoke, so it was a defensive approach from the beginning," Motsch said.

Firefighters worked to keep the blaze from spreading to nearby structures and dealt with a gas line that burned off at the meter. A crew from Black Hills Energy arrived on scene to shut off the gas.

"They have to dig the line up in the street and pinch it off," Motsch said.

The structure was not occupied at the time of the fire, and the residents of the building had been accounted for, Motsch said. He said he was not aware of any injuries.

The Clarke Drive building is considered a total loss, he said. The blaze also melted the siding on nearby houses.

Motsch said officials do not yet know the cause of the fire and that the assistant fire marshal had interviewed the residents.

The property at 590 Clarke Drive has a long history of city code violations.

A 2008 medical call to the home prompted local authorities to call the structure uninhabitable. "To summarize, this was one of the most unsafe houses that I have ever worked in," then-Assistant Fire Marshal Mike McMahon wrote in a report at the time.

Paramedics entering the home in 2008 found a dimly lit jumble of loose, live wires, uneven staircases without a railing and garbage strewn throughout the house.

The house at 590 Clarke Drive, owned by Kevin Gladwin, now 60, was later found to have multiple code violations after city electrical, plumbing, building and fire inspectors searched the home. One violation involved an open electrical panel exposing residents to 220 volts of electricity, "which could easily cause instant death to anyone coming in contact with the interior components," a city building inspector wrote in a report.

Gladwin is still listed as the owner of the building in online property records.

The City of Dubuque filed a notice of code violations against Gladwin, 590 Clarke Drive, last month for garbage considered to be a public nuisance. City officials asked that he be fined $750 and ordered to remove the garbage and maintain the property in a safe and sanitary condition, according to online court records.

Contact information for Gladwin could not be located Monday evening.

Robin Chaffee, who lives across the street from 590 Clarke Drive, said she was getting ready to leave the house when they walked out the front door and saw the nearby residence ablaze.

"The whole deck was on fire." she said.

She watched the fire unfold outside a nearby residence.

"We basically came over here because the cops were telling us we needed to get out from under the (electrical) wires because it was just raging," she said.

The blaze melted the siding off of one side of her house.

Trista David, who lives on Merchants Lane near the scene of the fire, said she was getting ready to take her daughter to softball practice when she saw smoke out the window. She came outside to see the top of the structure fully engulfed in flames.

"We walked outside, and you could just feel the heat," she said.

Firefighters were still on scene as of about 7:30 p.m.

A Dubuque fire was the most-read article on TelegraphHerald.com this past week.