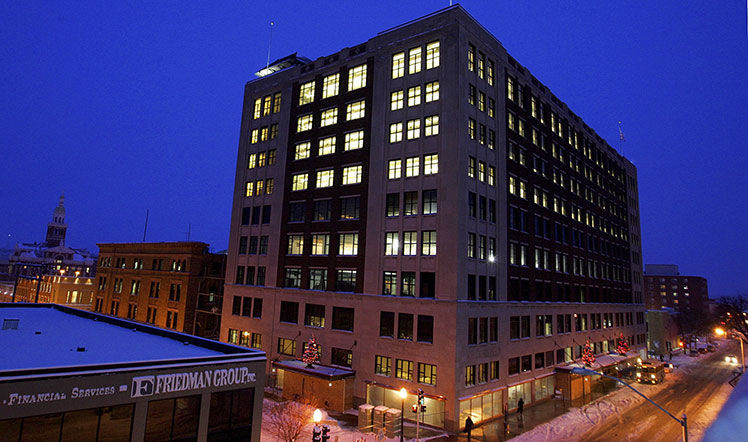 The companies looking to buy the Roshek Building have committed to creating at least 32 new full-time jobs. 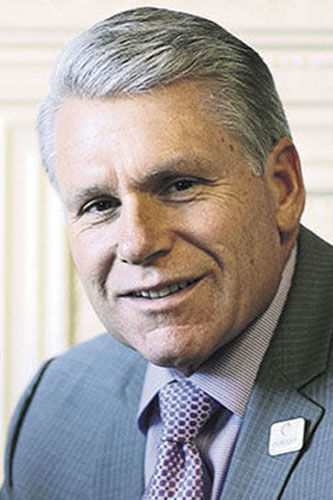 City of Dubuque officials say a $20 million plan for a new parking structure could be accelerated to help ensure a deal in which two major local businesses buy one of the city’s largest buildings.

Cottingham & Butler and Heartland Financial intend to close on the estimated $12 million purchase of the Roshek Building, 700 Locust St., prior to the end of the year.

“(T)wo of the fastest-growing companies who have been committed to the downtown since their very beginning (are) wanting to continue their commitment to downtown Dubuque,” said City Manager Mike Van Milligen. “But to do that, they want to minimize their risk as they try and bring employees. And part of that risk is, ‘Where are their employees going to park?’”

The company would receive other incentives as well.

Roshek Property would receive tax-increment rebates over a nearly 10-year period in return for spending at least $2.85 million on improvements to the former department store building and the creation of at least 32 new full-time positions between the two companies. Those positions would have to be created by Dec. 31, 2022, and maintained through June 1, 2030.

The incentives actually represent a transfer of tax increment rebates previously promised to Dubuque Initiatives, the nonprofit entity that currently owns the building. It entered into a development agreement with the city in 2009 as part of its $39 million investment into the historic structure.

Those improvements paved the way for the arrival of IBM, which brought 1,300 jobs to Dubuque, but has since seen its Dubuque workforce “slowly decreased” over time, according to city documents.

TIF repays companies for incremental increases in property taxes resulting from an expansion or improvement to a property.

Recent tax reimbursements to Dubuque Initiatives have ranged from about $260,000 to $270,000 annually, according to city Economic Development Director Jill Connors.

However, the figure is subject to change as amounts are based on actual taxes paid, Connors noted.

The new development agreement with the two companies also requires the city build a new 500-space parking structure by Dec. 31, 2022, to accommodate the influx of employees and to install lighting and call boxes between the new ramp and Roshek Building.

In March, council members approved $20 million for construction of a new parking facility as part of the city’s five-year capital improvement budget. City budget documents stated that the Locust Street parking ramp was reaching the end of its useful life and called for a replacement study in fiscal year 2024, with construction slated for the following fiscal year.

However, later analysis revealed the ramp “only needs some repairs and not replacement,” Connors wrote via email.

“Therefore, the budgeted funds can be used to build a new parking ramp in furtherance of both the Roshek development agreement and the Dupaco (Community Credit Union) development agreement,” she wrote. “We estimate that the $20 million will be sufficient to create the 500 parking stalls.”

Dupaco is in the midst of a $37.5 million renovation to transform the Voices building at 1000 Jackson St. into an operations center.

Van Milligen added that the budgeted parking-structure funding likely will be moved up in next year’s capital improvement budget to match the commitment in the Roshek Building development agreement.

“We will work with the mayor and City Council on identifying spots ... for a parking ramp to be built that would serve both the Historic Millwork District and downtown,” he said.

The city agreed to conduct an annual review of parking needs within the Millwork District and to create any additional spaces called for in the study as part of a development agreement tied to Dupaco’s purchase and renovation of the Voices building.

“There’s special challenges finding places to create parking, but I think we’re up to the challenge,” Van Milligen said.

City debt, repaid through revenue generated by Dubuque’s greater downtown tax-increment-financing district, would pay for the new parking ramp, according to city documents.

“Although the job-creation numbers are modest in the development agreement ... the anticipated growth in that building I will tell you is significant and would fully staff that building,” said Rick Dickinson, president and CEO of Greater Dubuque Development Corp., to council members. “And (it) would put significant pressure on downtown parking without expanding that capacity.”