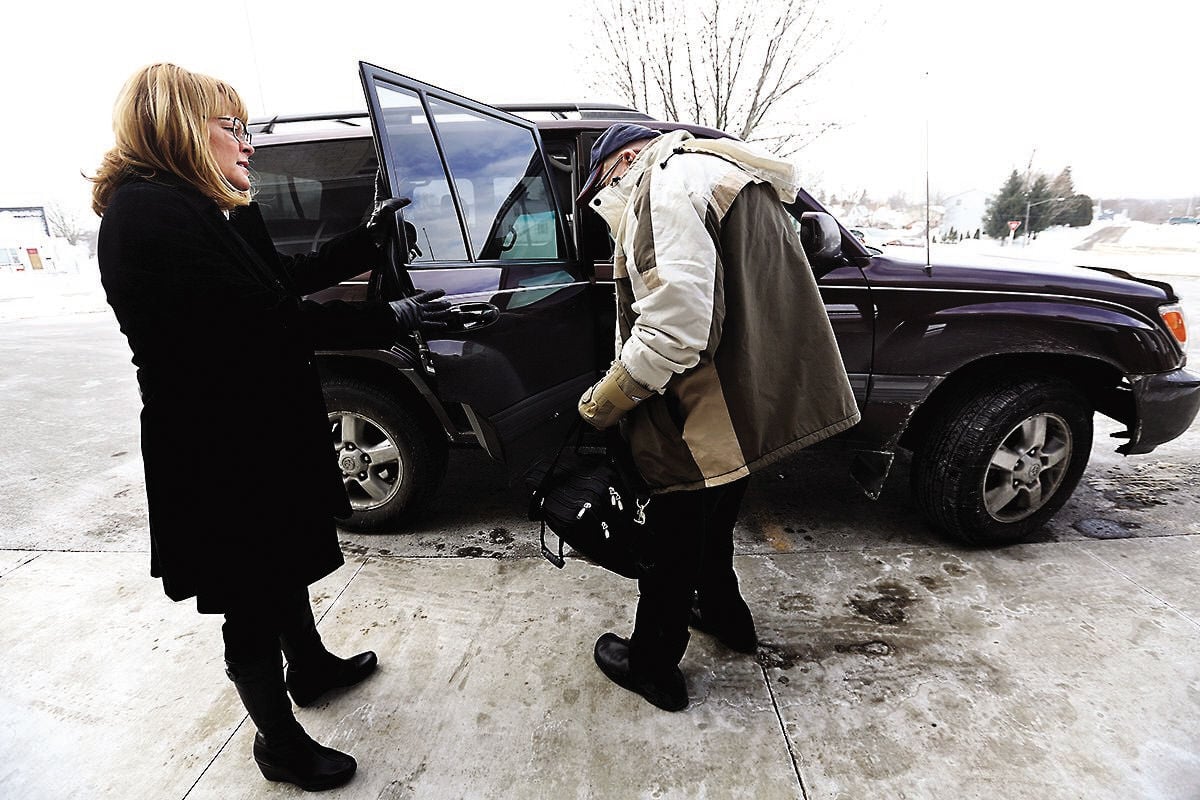 Carrie Schmid, of Dubuque, helps Don White into her vehicle Friday at Windsor Park. Schmid is a volunteer driver for DuRide, a nonprofit organization that gives rides to people who no longer can drive. DuRide marked its 50,000th ride a week ago. 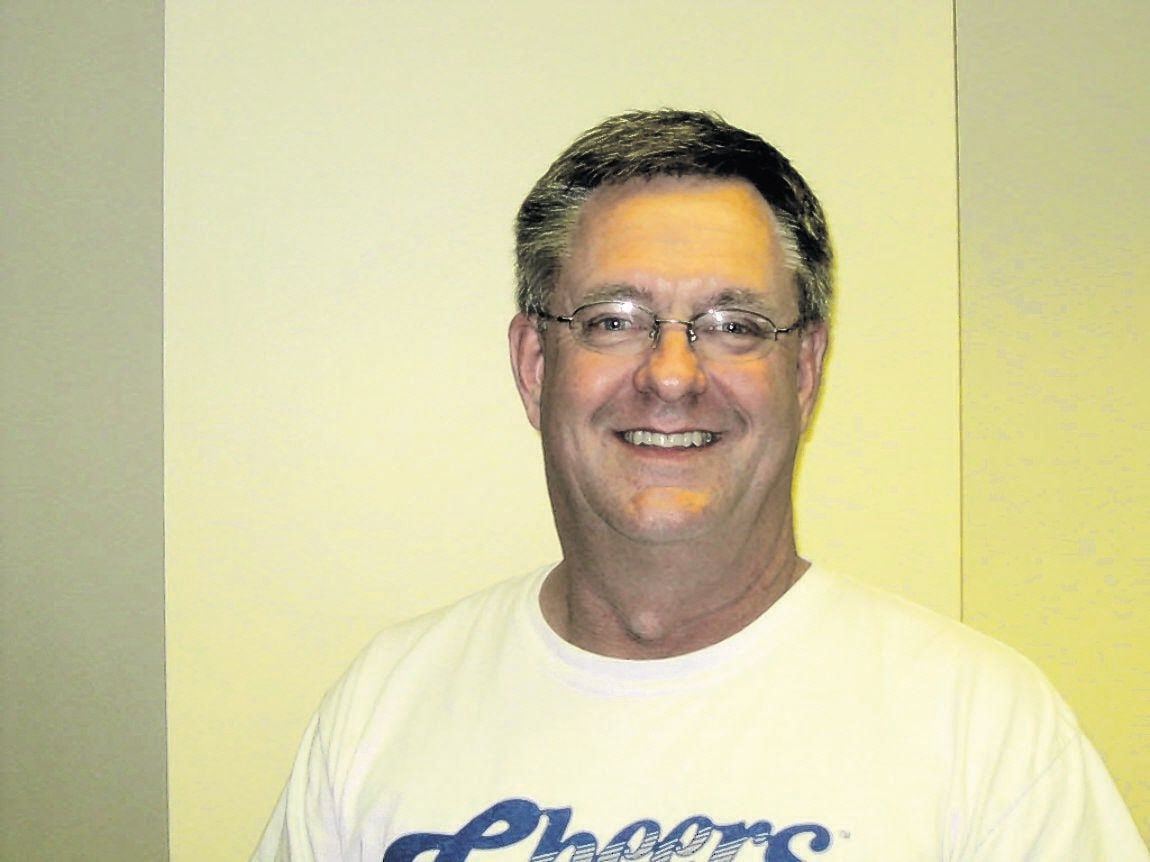 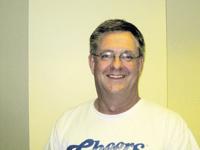 DuRide provided its 50,000th ride a week ago, marking a milestone.

In operation since 2008, and volunteer-driven, it really makes a difference, say those involved.

"It's all about the people and their stories," said volunteer driver Carrie Schmid. "They have so much to offer. It's been a very rewarding volunteer opportunity. It's just easy. You pick up people and drop them off. It means so much to them."

Schmid, who has been part of DuRide for about a year-and-a-half, urges others to join the volunteer pool.

"People are driving around, and there's no reason why you can't take someone to the grocery store, doctor, casino, library or a hair appointment," she said. "It's not time-consuming. You can choose when you drive, and you provide a great service."

DuRide began in 2008 with "seed" money from the city and provided 57 rides.

"Dubuque needed it to happen," said Greg Orwoll, DuRide executive director. "We had the people in place who had the time and money to make it happen. It's human, person-to-person. People are willing to step up and help others."

Founder Sue Balsamo gave the first ride and continues to provide about seven rides per week if her schedule allows.

"I do it because I know it's important to the community to keep seniors mobile and for the engaging conversations," she said. "DuRide is an important, affordable and friendly transportation option for seniors.

"Volunteering is flexible and is good for the soul," she continued. "I've been surprised at how well you get to know someone on a short trip. When seniors can't drive, they can feel isolated. Our volunteer drivers and hardworking, compassionate staff bring sunshine into a lot of lives."

The $45 annual dues, Orwoll said, offer a "credible point of data" for grant-writing, and the clients are paying part of their way. He adds there are some discounted membership fees for the financially challenged.

Orwoll explained 40 percent of DuRide's operating budget is paid by clients, 40 percent from contributions and grants and the remaining 20 percent comes from a purchase-of-service agreement with the city of Dubuque.

The volunteers are the organization's backbone. DuRide offers reimbursement, but of the 153 volunteer drivers, only two have asked for a small reimbursement for gasoline.

"It takes time, talent and commitment," Orwoll said. "Our volunteers are our treasure."

Orwoll recalled assisting a woman who suffers from macular degeneration. She required shots in her eyes.

"She told me if it wasn't for DuRide, she could have lost her eyesight," he said. He praised the efforts of another woman who meets a group weekly for 5 a.m. coffee at a downtown cafe.

There is an early-awakening driver who starts her day at 4 a.m.

Orwoll notes there is a waiting list for those seeking rides and that an increase in the volunteer pool could accommodate that.

Bill Fitch is a pilot and a volunteer driver since DuRide's early days.

"Being retired, I had the time and felt there was a need in the community for this," he said. "DuRide provides about 1,000 rides a month and is growing. There is a definite need for them in the community. Being a volunteer is a very rewarding feeling -- helping senior citizens that no longer drive get places they need to be. "

Ellen Lau recalled dropping off a woman at a destination Friday morning.

"She said, 'Thank you for driving me today, and thank you for being a volunteer,'" Lau said. "Many of my rides are regular ones on a recurring basis that have resulted in true friendships."

It's all about people.

"What I really enjoy about what we do here at DuRide is the difference we make for so many people. Everything from medical appointments to shopping trips to social outings and family gatherings, we're here to make it happen for folks who need that assistance," Orwoll said. "When you're 65 and older, a lot of times you're as active as can be, just not in a position where you can drive any more. We're here to make that happen. We keep people engaged in our community.

"As one of our members said, 'You keep my golden years golden, and I can't thank you enough.'"

Founded in 2008, DuRide is a nonprofit organization that works closely with other transportation providers and fills a special need. Rides are provided by volunteers who use their personal vehicles for DuRide members age 65 or older who can no longer drive. An annual membership costs $45, and a round-trip ride is $8. Service is door to door, and available seven days per week, 365 days per year, for members to destinations in Asbury, Iowa; East Dubuque, Ill.; and Dubuque. For more information about volunteering or membership, call 563-451-4999 or visit www.duride.org.

Education: Luther College, double major in psychology and business management with an emphasis on music.