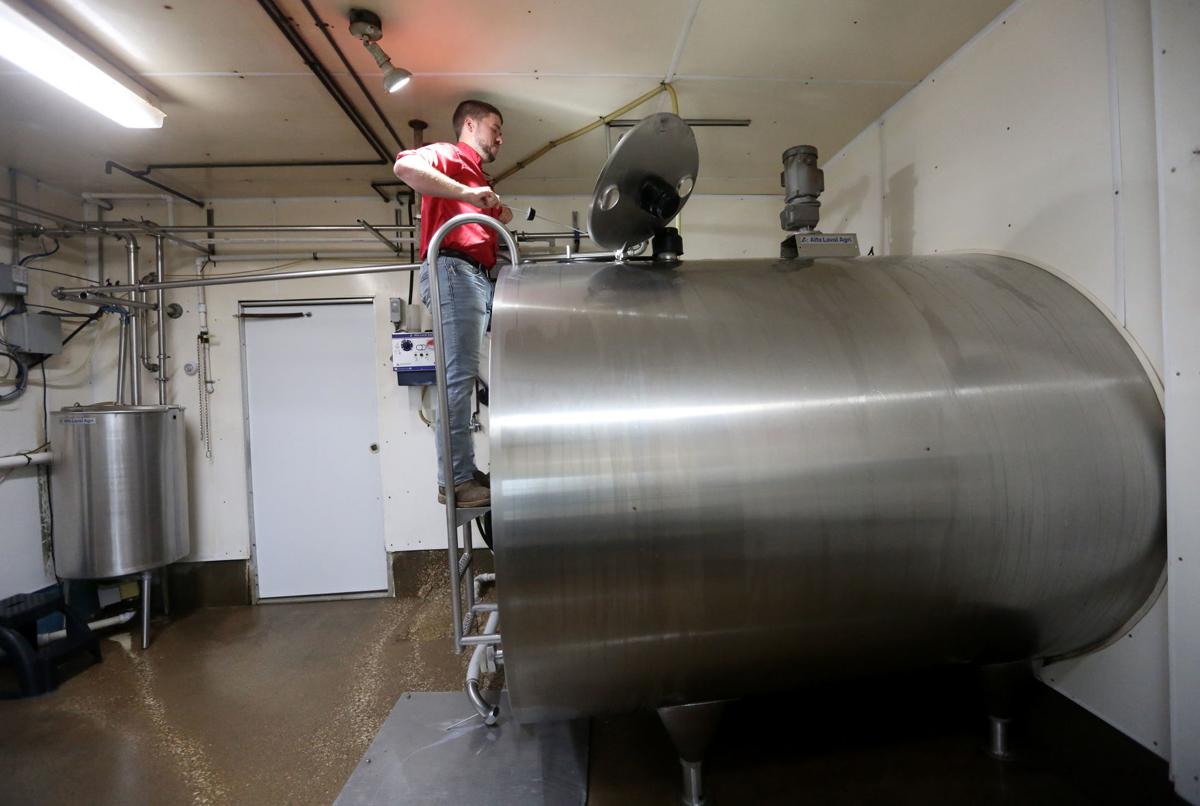 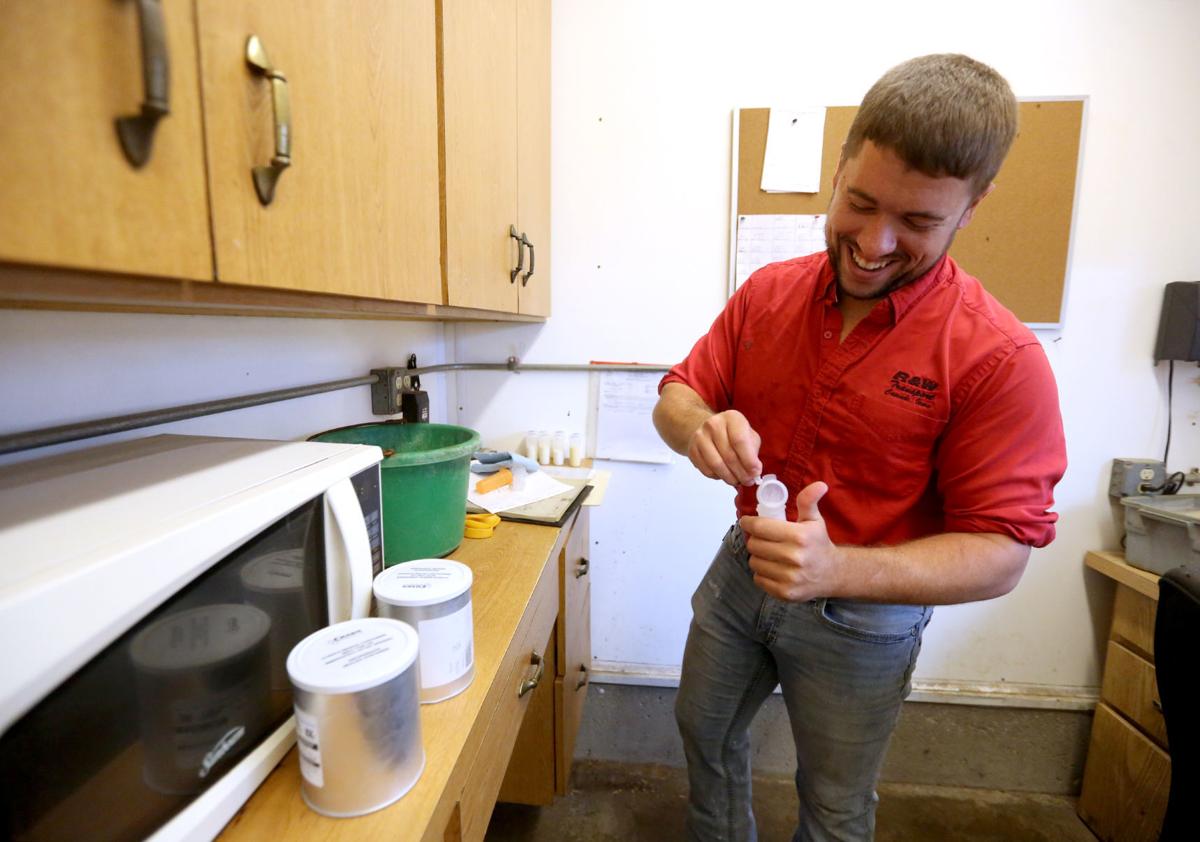 Hunter Bergfeld, with R&W Transport in Cascade, Iowa, does a milk sample at Kruse Dairy Farm in Petersburg. 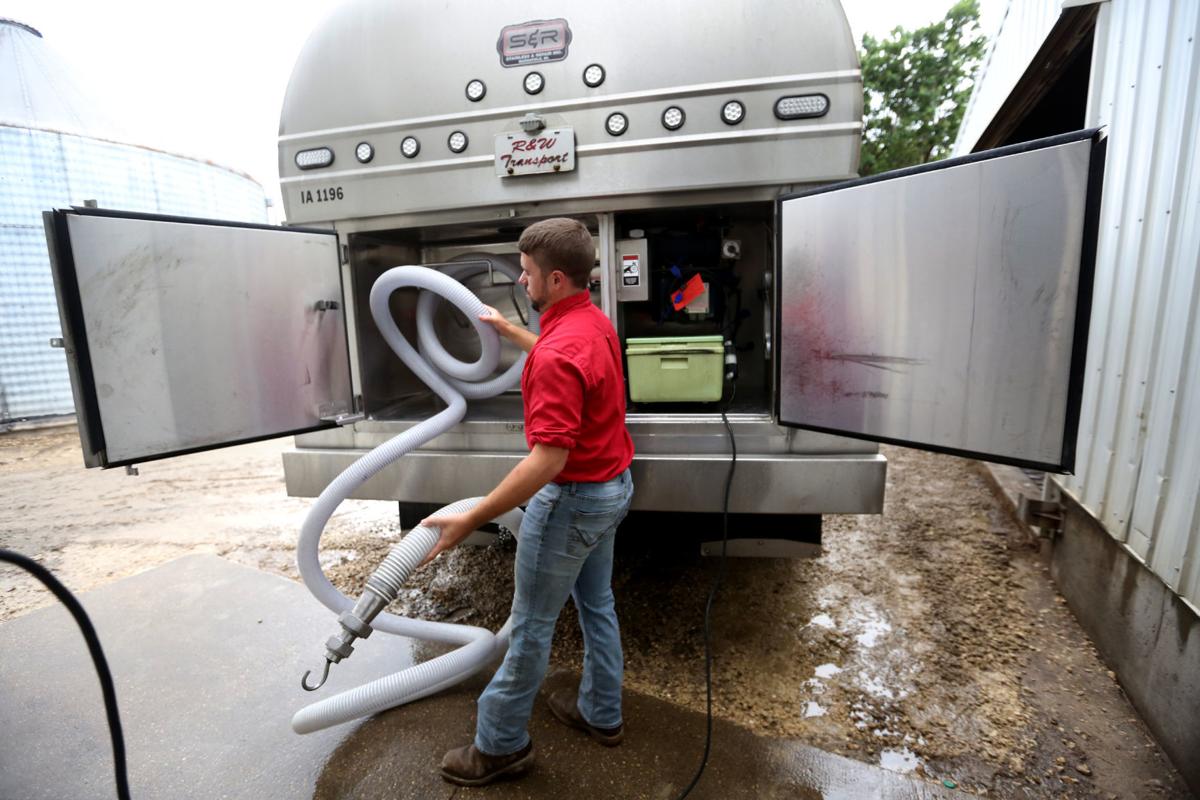 Hunter Bergfeld, with R&W Transport in Cascade, Iowa, removes a hose to collect milk at Kruse Dairy Farm in Petersburg, Iowa. Hunter co-owns the Cascade business with his parents. The 25-year-old business, which employs 10, covers more than 40 farms in six counties. 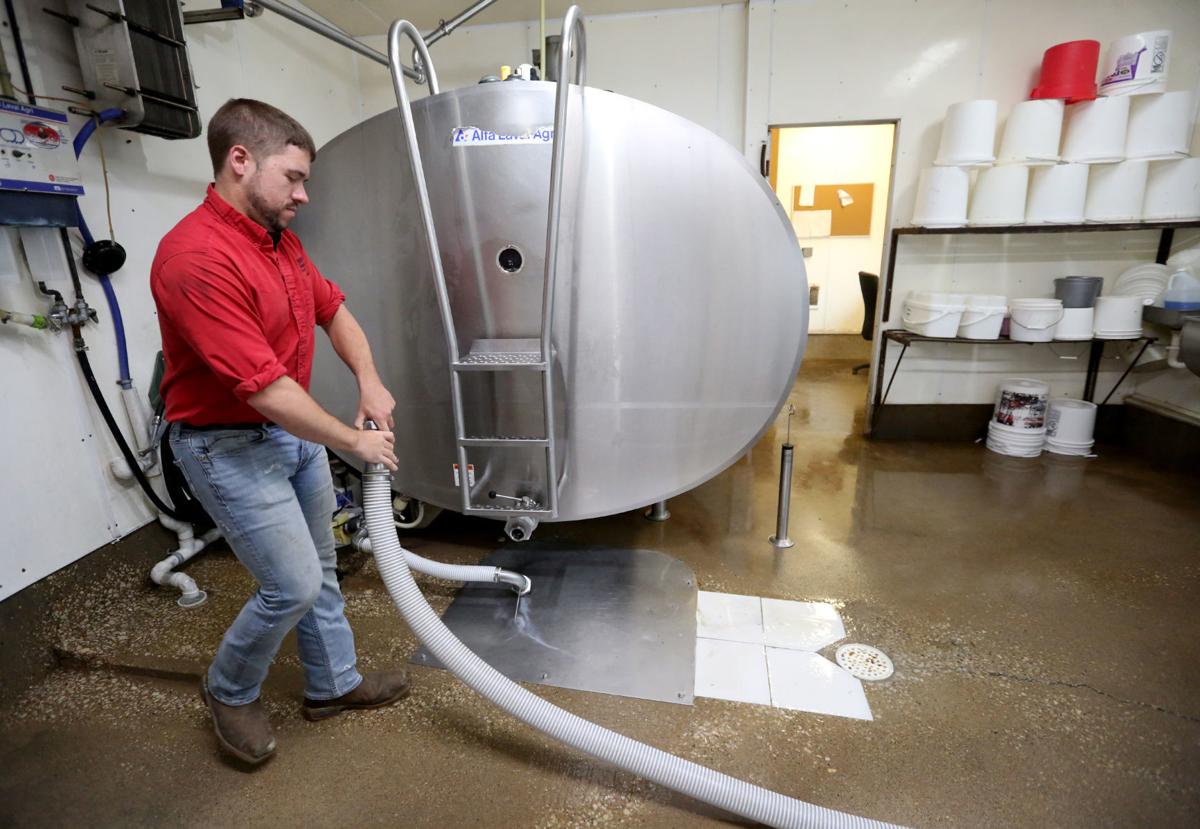 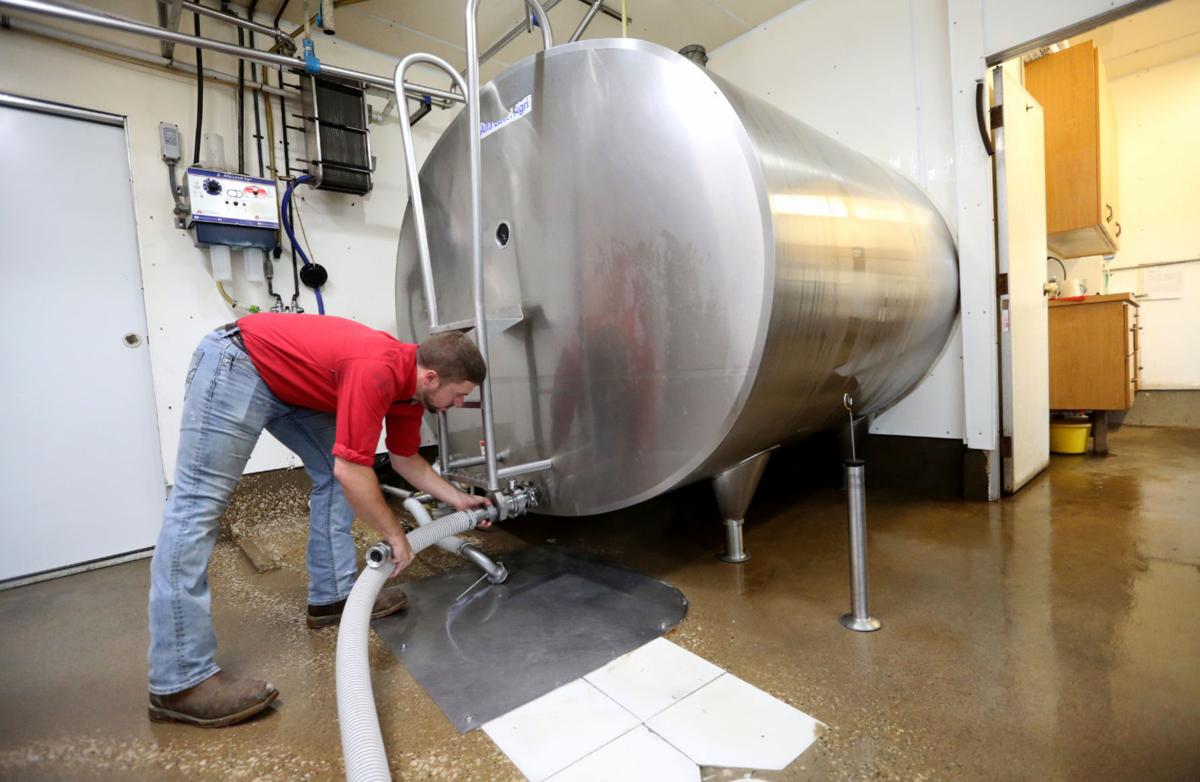 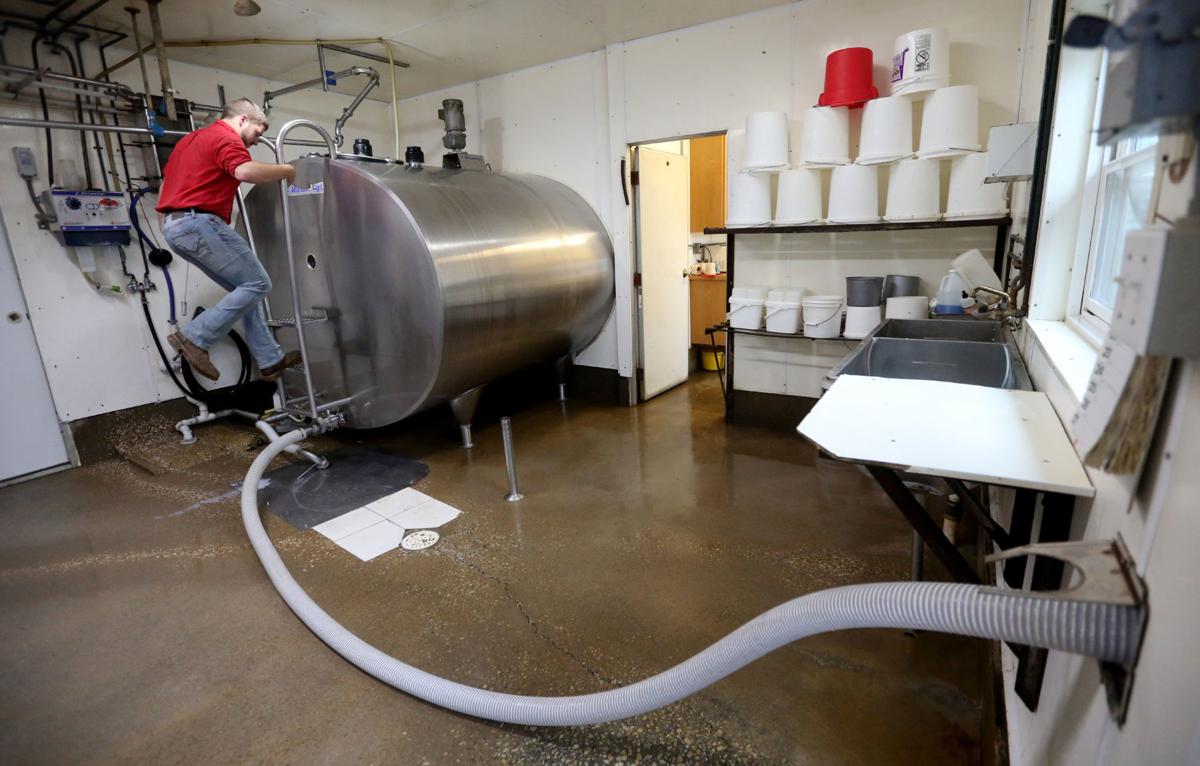 The milk is pumped into the container to prepare for hauling. 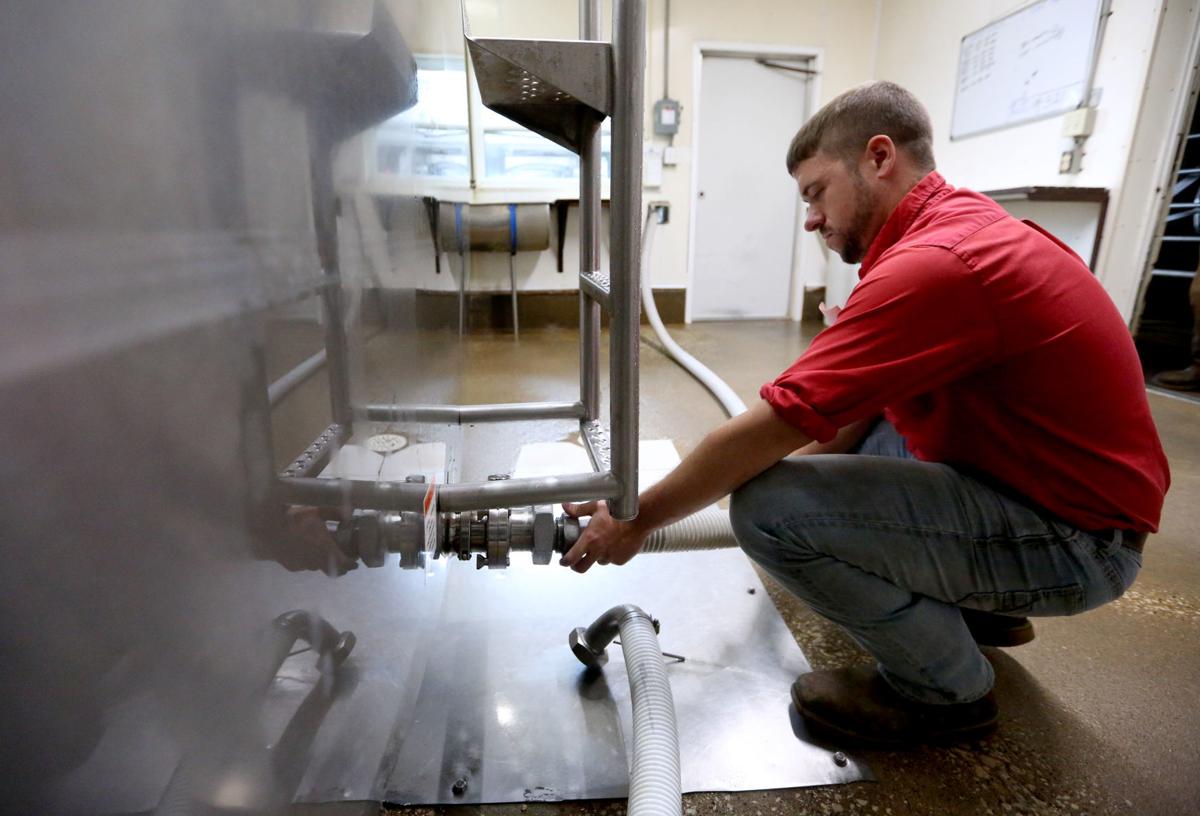 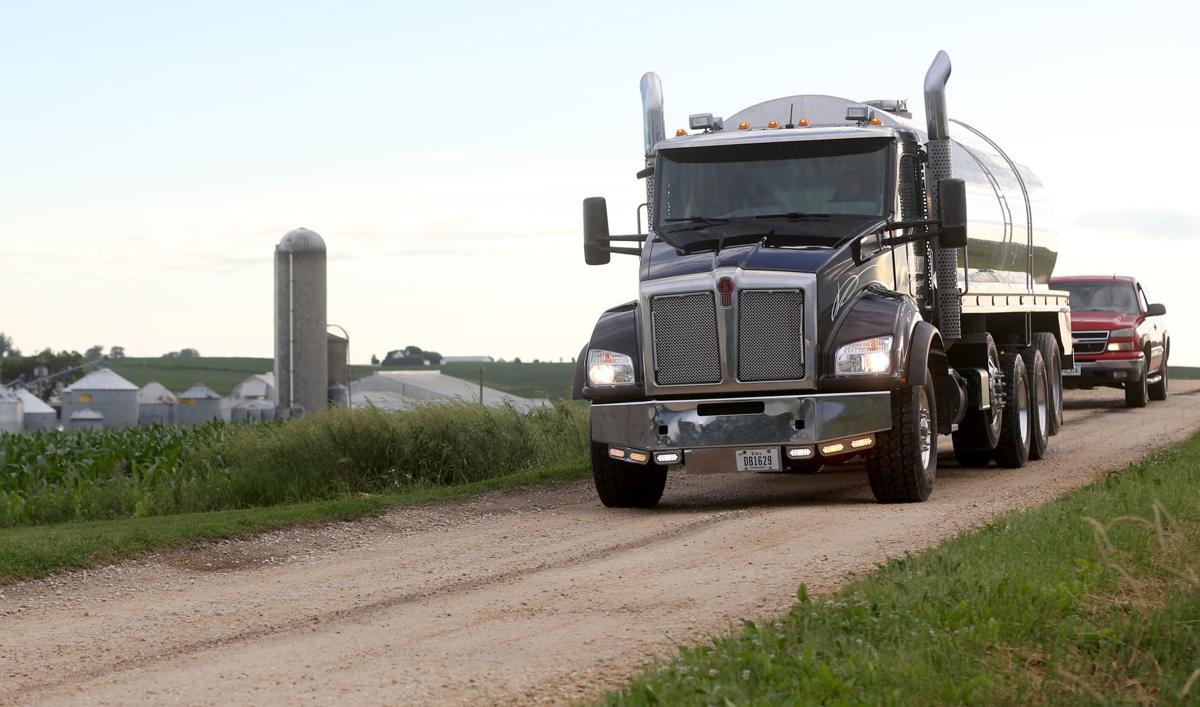 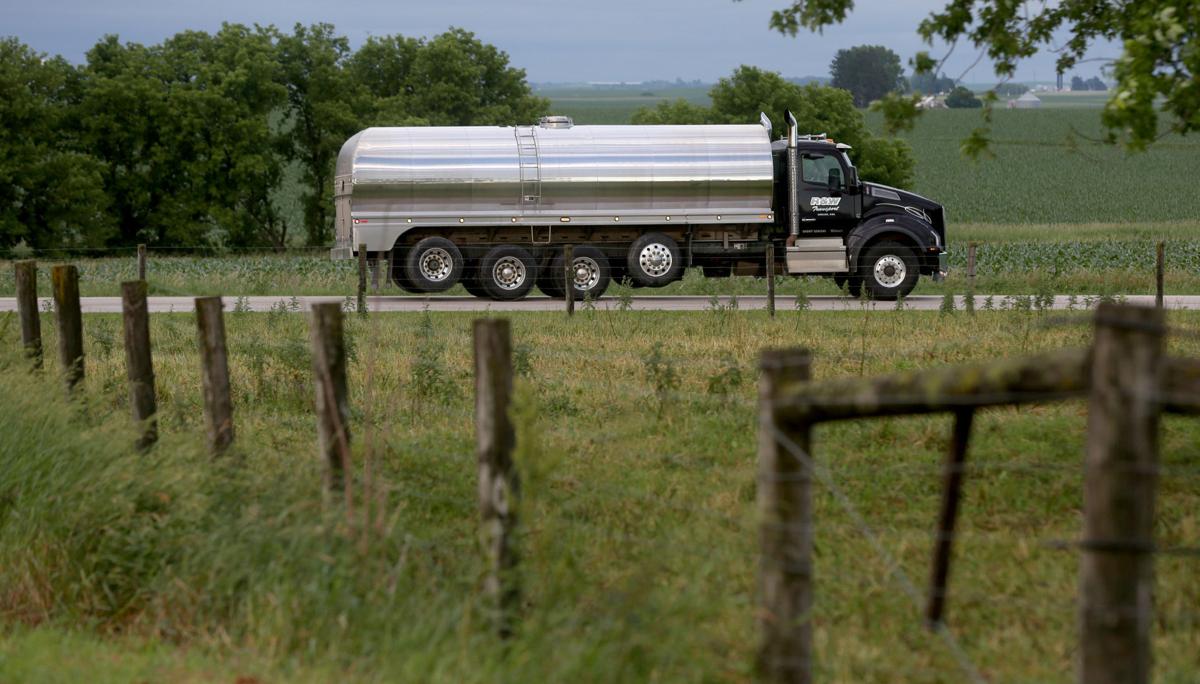 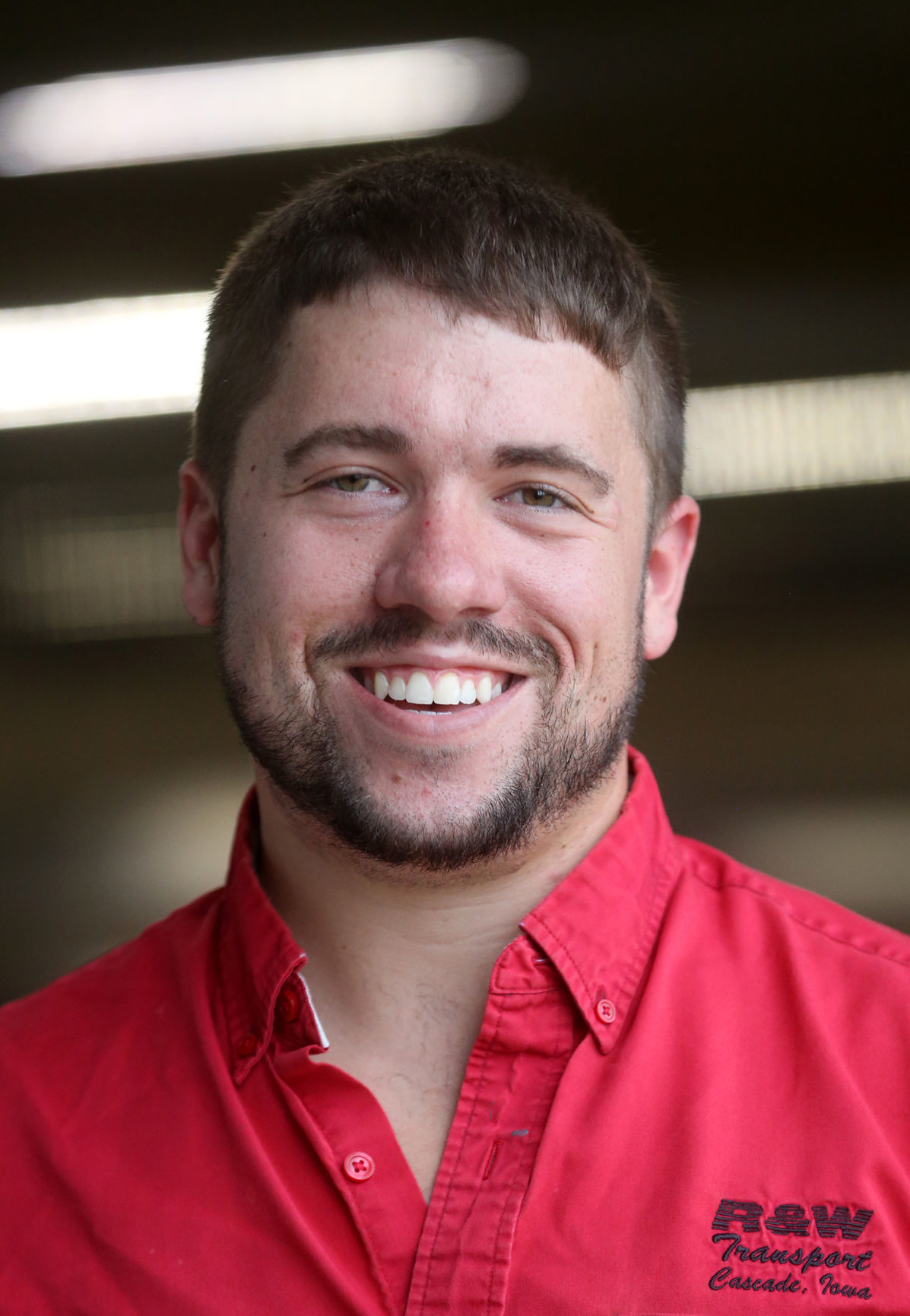 Hunter Bergfeld, with R&W Transport in Cascade, Iowa, does a milk sample at Kruse Dairy Farm in Petersburg.

Hunter Bergfeld, with R&W Transport in Cascade, Iowa, removes a hose to collect milk at Kruse Dairy Farm in Petersburg, Iowa. Hunter co-owns the Cascade business with his parents. The 25-year-old business, which employs 10, covers more than 40 farms in six counties.

The milk is pumped into the container to prepare for hauling.

CASCADE, Iowa — From the time Hunter Bergfeld was 3 years old, he spent his days riding in the passenger seat of his parents’ trucks, hauling milk from area farms.

“I just remember going out to farms, petting calves, playing with the farmers’ kids,” he said. “It was kind of like growing up on their farms.”

Today, the 25-year-old still spends his days hauling milk, but now, he is the one behind the wheel.

Hunter, of Cascade, runs the family business, R&W Transport, bringing milk from area farms to dairy processing plants. His parents, Randy and Wendy Bergfeld, started the company 25 years ago when they took over the hauling route, so Hunter and the business grew up together.

“I loved taking him along,” Wendy said, recalling the conversations, games and pit stops for junk food that she shared with her son along the route. “When the roads were bad, I’d pull him out of school to come with me because I didn’t want to be out there alone.”

After graduating from Cascade High School, Hunter earned a degree in business management from University of Northern Iowa. Almost as soon as he turned his tassel, he told his parents that he wanted to help run R&W Transport.

“It’s the greatest pride a father can have, to have his son take over his business after he’s done,” Randy said.

Wendy added, “It’s something that we could hand down to him.”

These days, the Bergfelds each own one-third of the business. Wendy handles the paperwork, Randy is behind the wheel, and Hunter splits time between managerial tasks and driving the night shift.

The trucks are intimidating machines, which have only gotten more massive since 3-year-old Hunter rode alongside his mom. Their biggest truck used to hold 30,000 pounds of milk, he said; now he drives trucks that hold up to 50,000.

In fact, nearly everything about the business has gotten bigger. From two drivers with two trucks, R&W Transport has expanded to 10 employees driving five trucks covering more than 40 farms in six counties: Buchanan, Clayton, Delaware, Dubuque and Poweshiek counties in Iowa and Grant County, Wis.

Some things remain the same, including Hunter’s favorite part of the job: The daily conversations with the farmers.

“I wish I had more time to talk with them,” he said. “Sometimes, I have to pry myself away from someone because I stood there and talked to them for 30, 40 minutes after I finished pumping. You kind of forget that you got a job to do.”

Some of those farmers have been with the Bergfelds since the formation of R&W Transport, such as Mark and Mary McAllister, of New Vienna.

“We’ve never thought about changing haulers or companies,” Mary said. “A milk hauler comes on your farm every day, so you want people who are honest, and (the Bergfelds) are as honest as the day is long.”

One of the McAllisters’ sons is friends with Hunter and now drives for the Bergfelds.

“As soon as Hunter was old enough to drive, he was sitting in a milk truck,” Mary said. “We know them like family.”

Other farmers are recent additions to the route, such as Jim Wulfekuhle, of Holy Cross. But even from his first interaction with the Bergfelds three years ago, he knew they were a cut above.

“They pick up (our milk) at night, so they shut the lights (on the trucks) off so they don’t shine in the house and wake us up,” Wulfekuhle said. “They always make sure the milk house is clean when they leave and everything is sprayed down nice. It’s just odds and ends like that that you tend to appreciate.”

For the Bergfelds, those little touches are simply part of their responsibility.

“That’s what I don’t take lightly is that commitment that I’m making to the farmers — we’re going to work as hard as they do, if not harder,” Hunter said.

R&W Transport has had its fair share of difficulties, from bad weather to breakdowns to processing plant closures. But like the postal service, nothing stays the milk haulers from their rounds, a fact that makes all the Bergfelds proud.

“What a great feeling of accomplishment that is when you think there’s no way you can get it done, and then you get it done,” Randy said. “We never had it where we couldn’t get it done yet.”

So perhaps it’s no surprise that, although the dairy industry has been “a tough spot” due to COVID-19, according to Hunter, life on the milk route hasn’t changed too much.

“We haul milk on Christmas, we haul it on Sundays, and apparently, we haul it during pandemics, too,” he said with a laugh. “That makes me feel good that this job’s going to be here through thick and thin, hell or high water. We’re needed.”