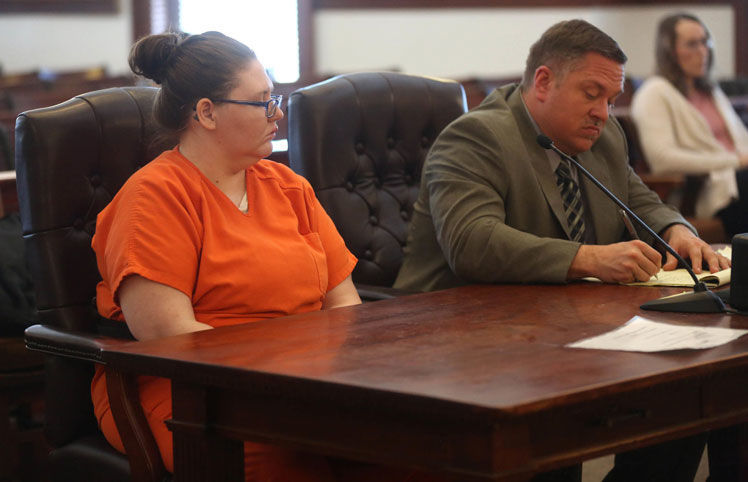 Jamie Weigel, 27, appears during her sentencing hearing at the Lafayette County Courthouse in Darlington, Wis., on Friday, Feb. 14, 2020. 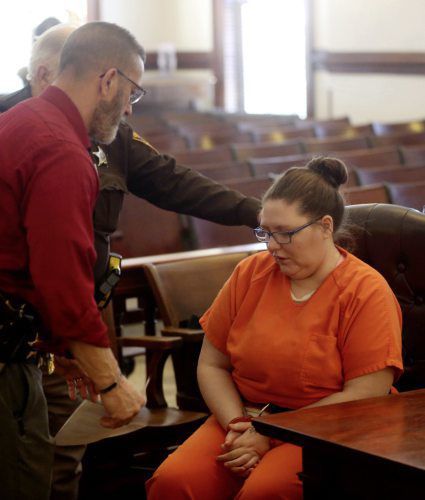 Jamie Weigel is escorted after her sentencing hearing Friday at the Lafayette County Courthouse in Darlington, Wis.

Jamie Weigel, 27, appears during her sentencing hearing at the Lafayette County Courthouse in Darlington, Wis., on Friday, Feb. 14, 2020.

Jamie Weigel is escorted after her sentencing hearing Friday at the Lafayette County Courthouse in Darlington, Wis.

In addition to the prison term, Weigel must serve 10 years of extended supervision and have no contact with her children or anyone younger than 18 unless approved by the Wisconsin Department of Corrections.

“If anyone ever doubted that evil existed in the world ... they would need to look no further than this case to see that it does,” said Judge Duane Jorgenson. “There’s no doubt in my mind that, Jamie Weigel, you had the specific intent to kill your children, not by some spontaneous act of anger … but — and what is more hideous — is that it was by really slow, deliberate withholding of food, nurturing and caring over an extended period of time.”

Weigel and her fiance, Dalton A. Hopper, 25, were charged in April, shortly after they took their then-4-month-old daughter to the hospital due to “excessive vomiting,” according to court documents.

Doctors determined the girl had severe diaper rash, bed sores and other abrasions consistent with being left “lying in one place without being picked up for hours on end,” court documents state.

The girl also was so underfed she “could have died from malnutrition in as little as a week’s time,” authorities said. She weighed 6 pounds, 13 ounces.

Investigators later determined that the girl and her 1-year-old sister were left alone in a room for extended periods of time. Both girls were severely underweight and suffer from “significant developmental delays” as a result of the neglect, authorities said.

Hopper also pleaded guilty to child abuse and chronic neglect of a child. He was sentenced earlier this month to 15 years in prison.

Weigel’s attorney, Peter Bartelt, recommended that she be sentenced to 10 years in prison and 10 years of extended supervision, as well as a five-year period of consecutive probation. He argued Weigel lacked a criminal record; had documented mental health issues, including depression and anxiety; and suffered from a “somewhat troubled childhood.”

While stating her mental health issues “are real, but by no means raised to excuse her conduct,” Bartlet wrote that Weigel “was not provided with the experiential or intellectual tools to overcome her own mental health demons.”

A presentence investigation report from the Department of Corrections recommended 14 years in prison and six years of extended supervision.

Prosecutors pushed for 16 years in prison, arguing Weigel’s depression and anxiety were not an excuse.

“Many parents have depression and anxiety, but those parents still feed and care for their children,” said Lafayette County District Attorney Jenna Gill.

Gill, too, noted a psychological evaluation determined Weigel “has no serious or debilitating psychological conditions that would prevent her from essentially being a fit mother.”

Gill argued Weigel — who nervously bounced her leg and showed little emotion as the decision was read — has shown no remorse; admitted to and tried to conceal her actions; and displays “a blame-shifting personality.”

“She also tried to use the excuse that she was overwhelmed and she didn’t have enough help,” Gill said. “I also guarantee that most of us, or all of us that are parents, have been overwhelmed at some point in our lives because parenting is not an easy task. That is not a justification to treat children the way that they did.”

While she never was charged in that instance, Weigel previously was investigated in Grant County. Investigators then found her two older children “were greatly and excessively underweight, and they were not meeting developmental milestones,” according to Gill.

Jorgenson cited the investigation as a reason for his sentencing.

“We’ve been down this road before,” he said. “You knew what you were doing … and you tried to conceal it. That is particularly egregious and certainly an aggravating factor here.”

Jorgenson also heard statements read before the court submitted by the foster parents now caring for Weigel’s children and from family members.

Both girls have made steady progress, according to their foster parents and family, though the youngest still has cognitive delays and receives physical, occupational and speech therapy.

“A 5-pound helpless infant has turned into a chunky, smiley, giggly, 20-pound baby,” said a statement from one of Weigel’s cousins that was read during the hearing. “They’re finally in a loving home with two amazing parents and a great support system.

“Two innocent babies who did nothing wrong and were denied the basic things needed to live — who does that to their children? Their flesh and blood?”