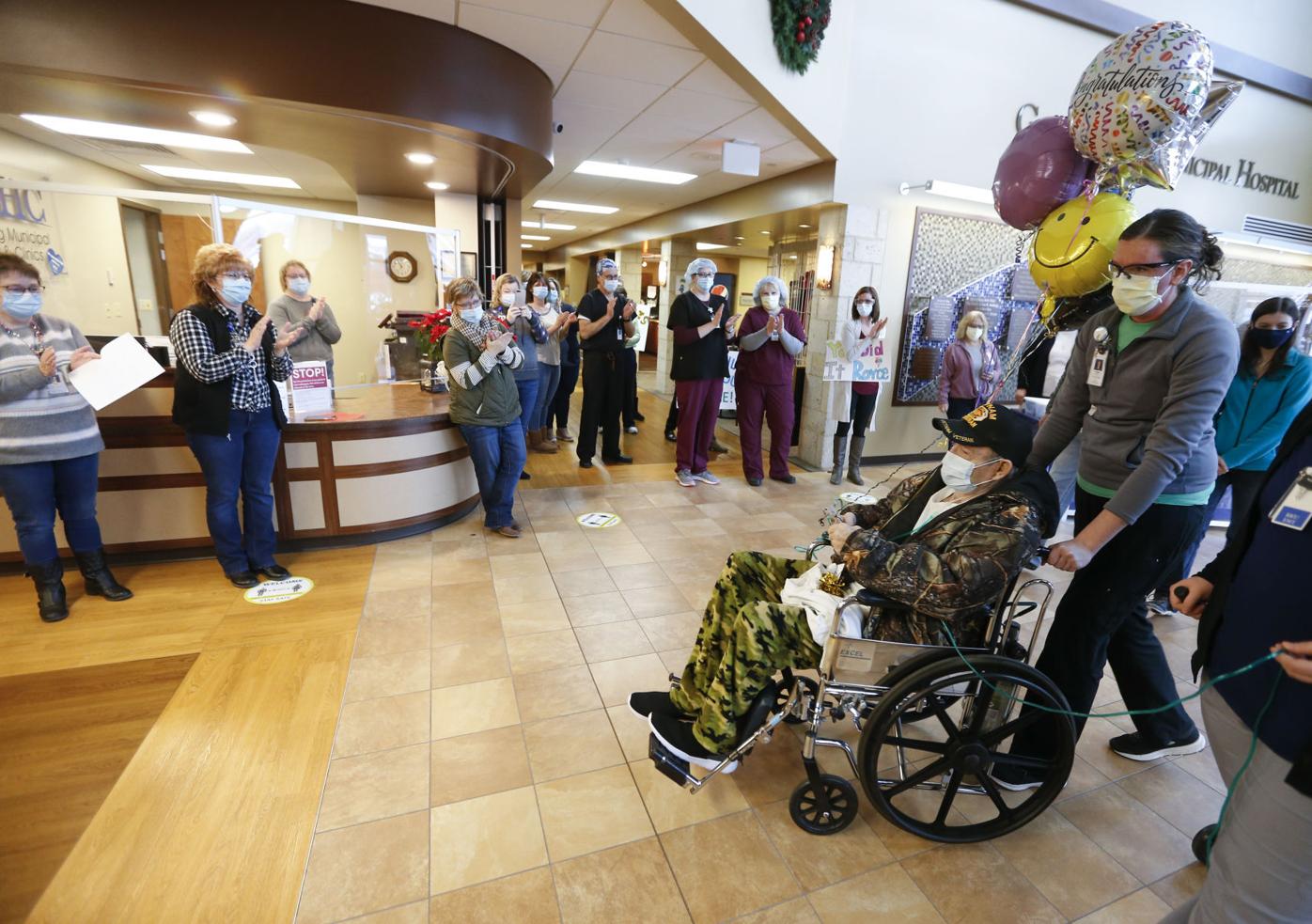 Royce Hansel receives a warm farewell from staff at Guttenberg (Iowa) Municipal Hospital after spending 65 days in the patient care unit with COVID-19. He was discharged Friday. 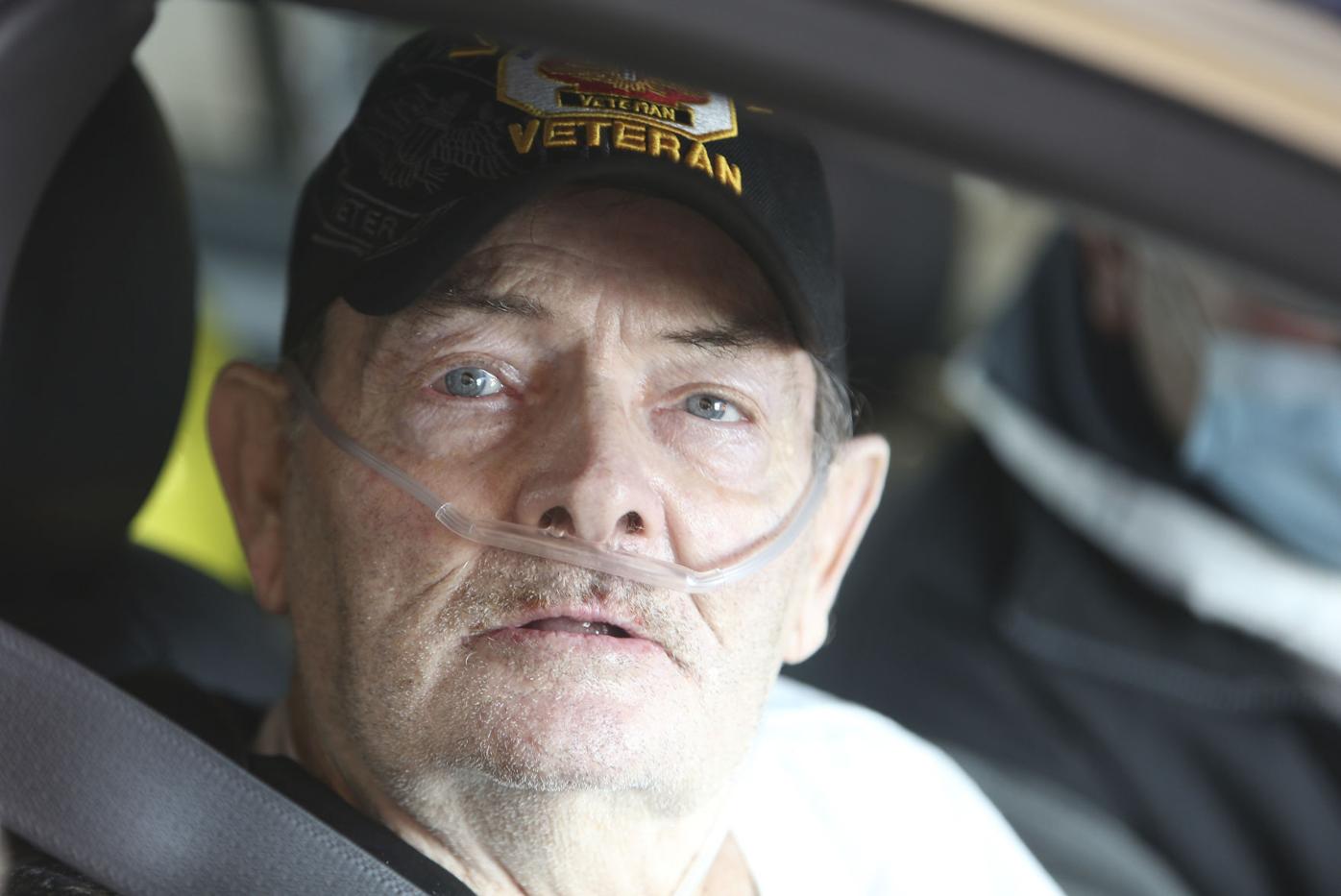 Hansel takes a last look at his well-wishers as he departs the hospital. 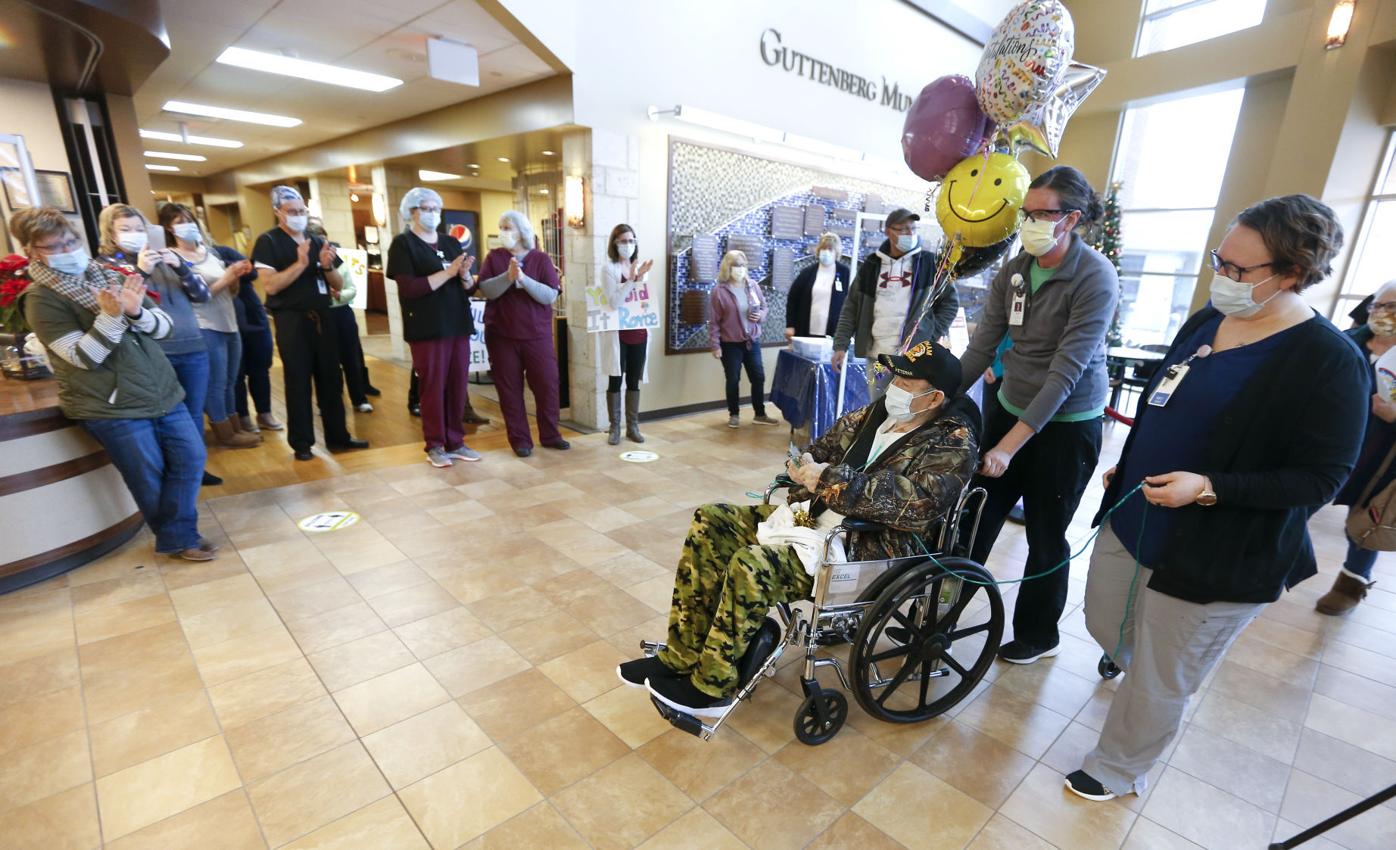 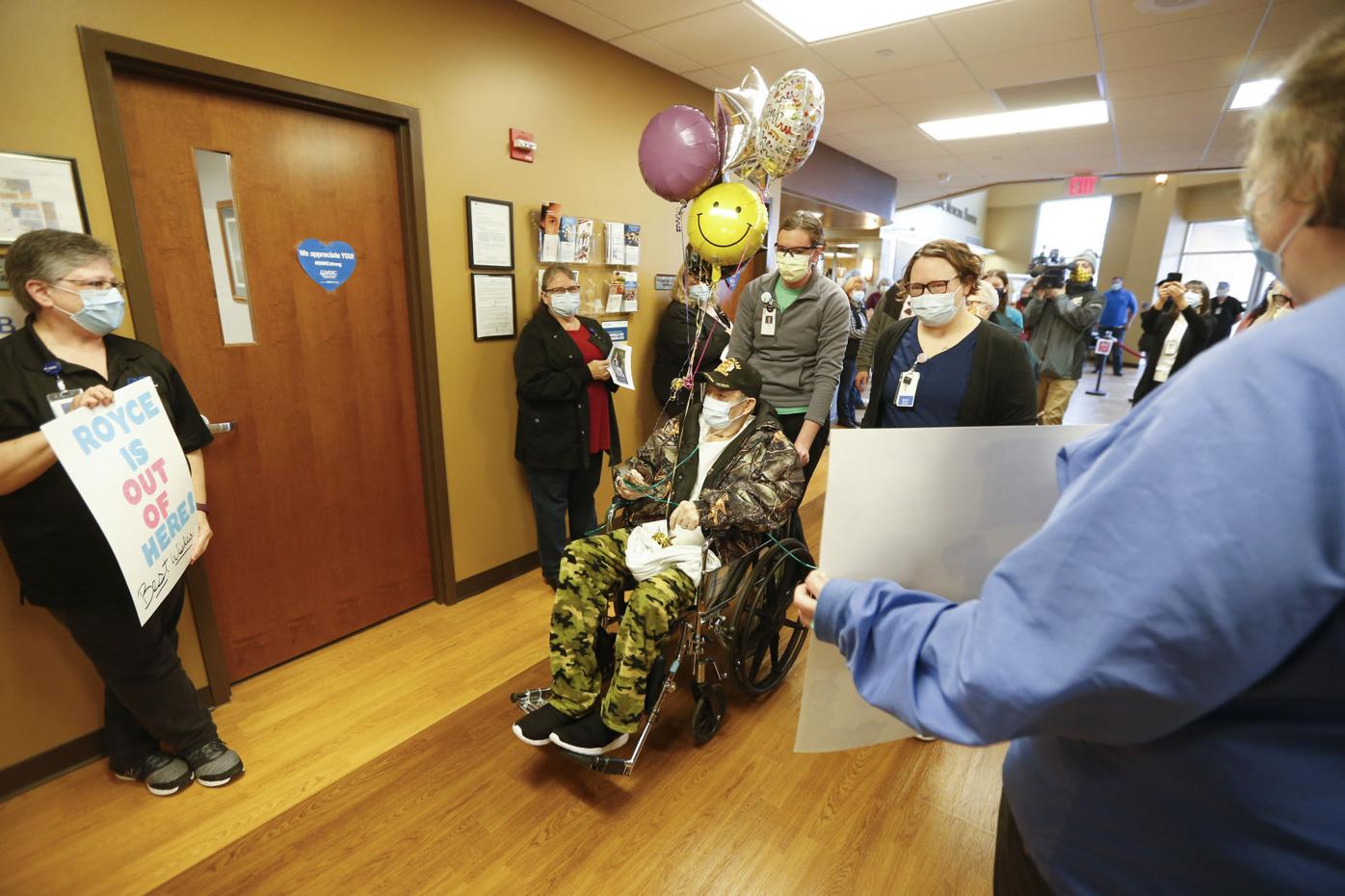 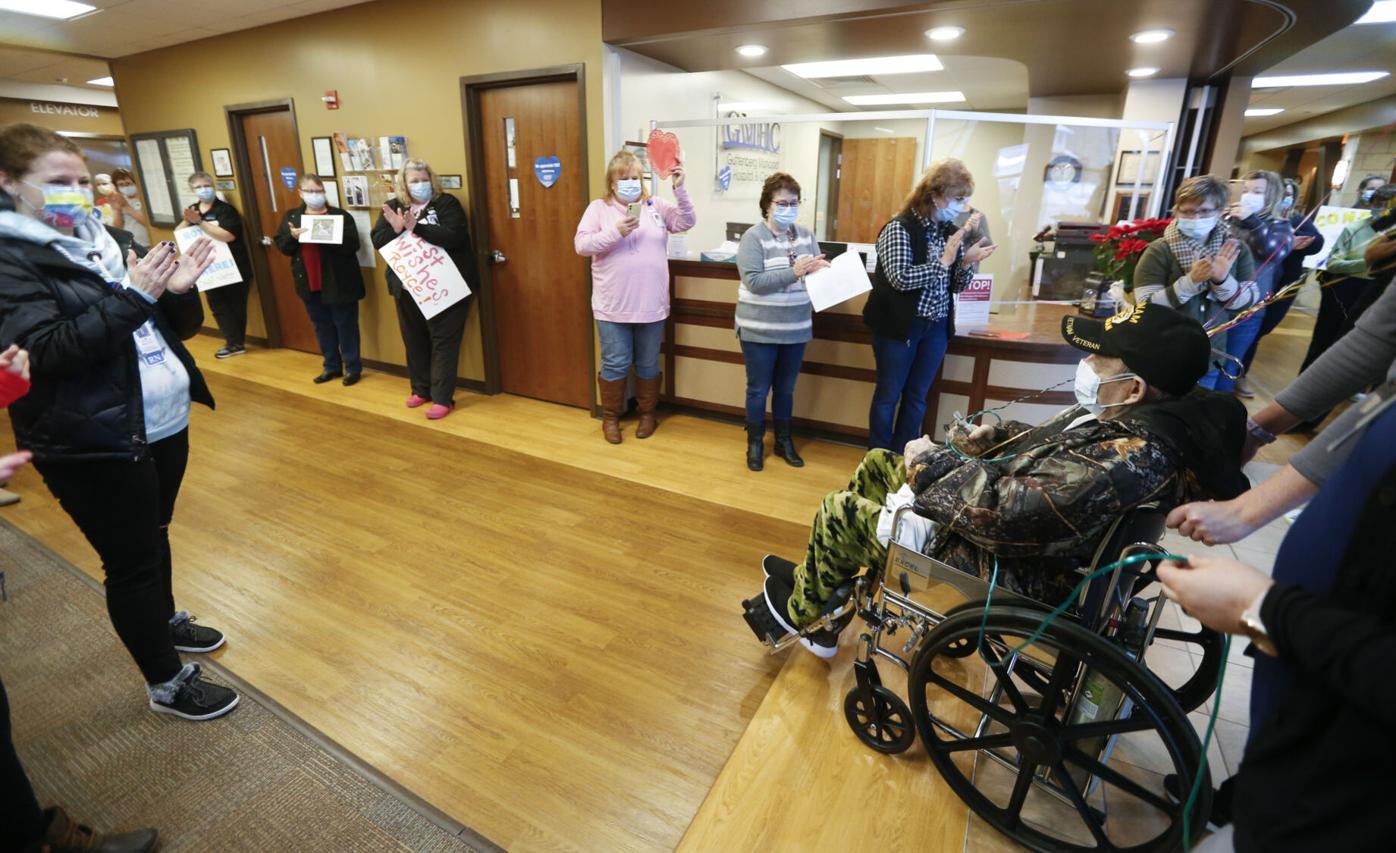 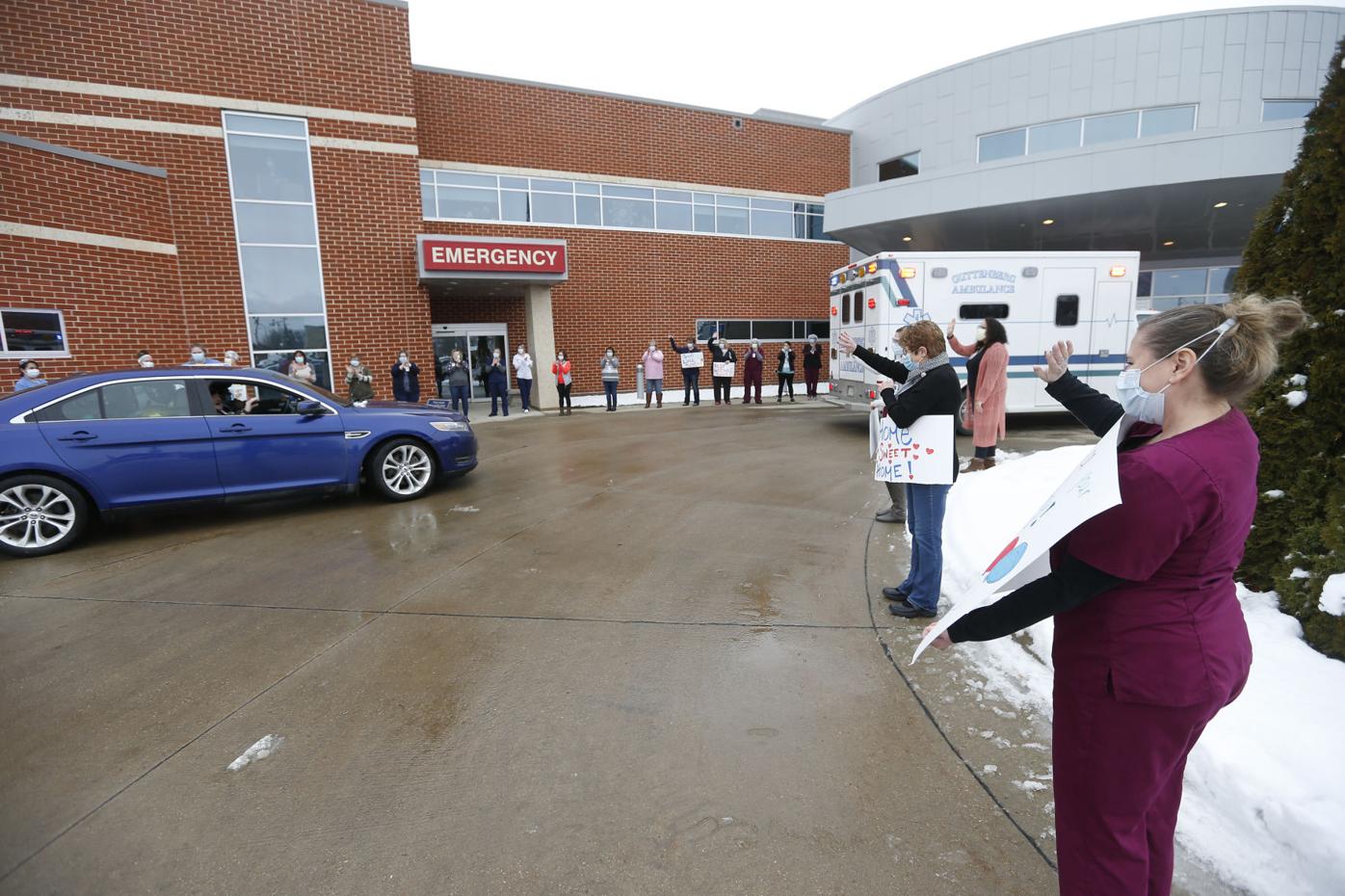 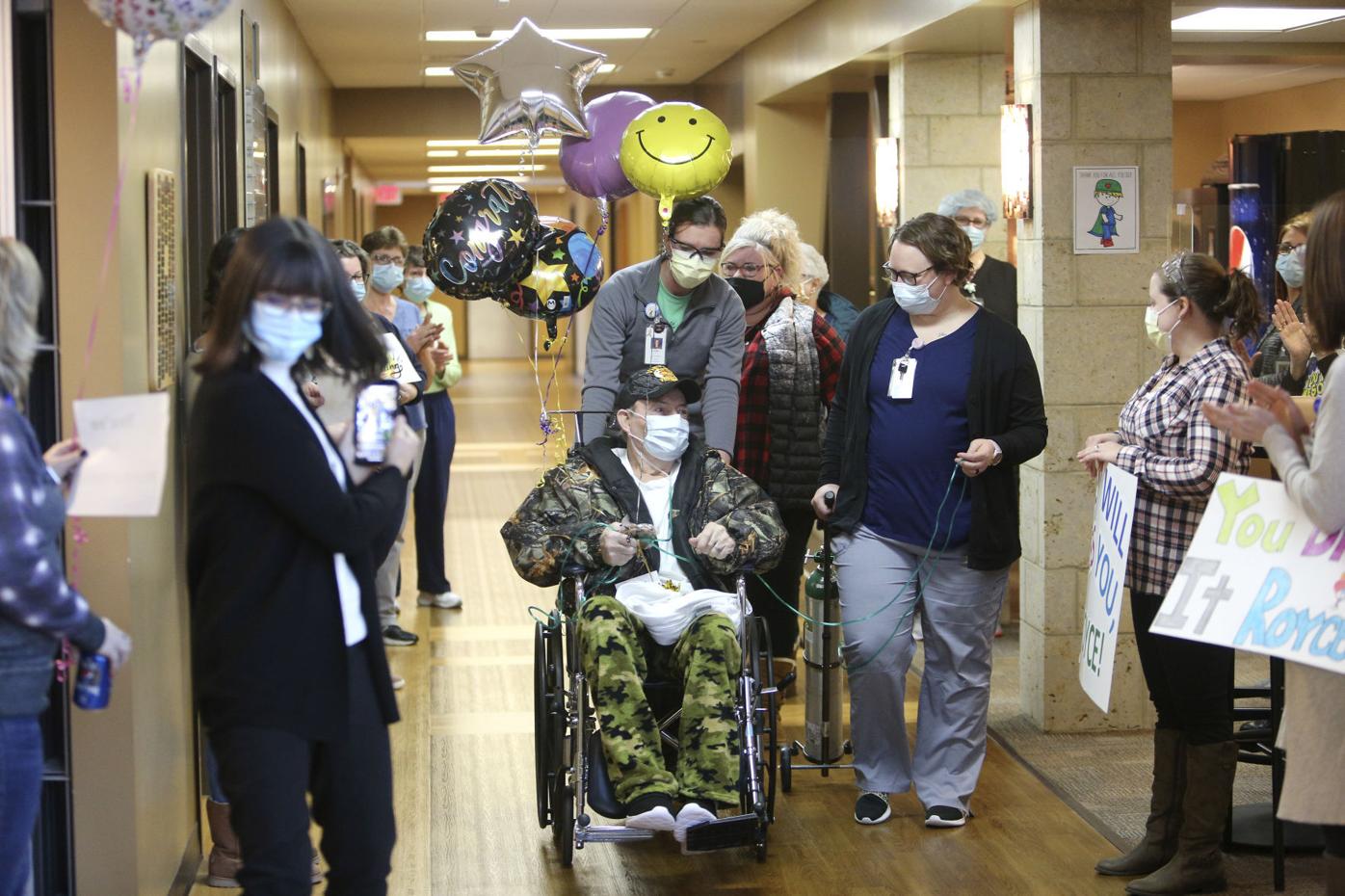 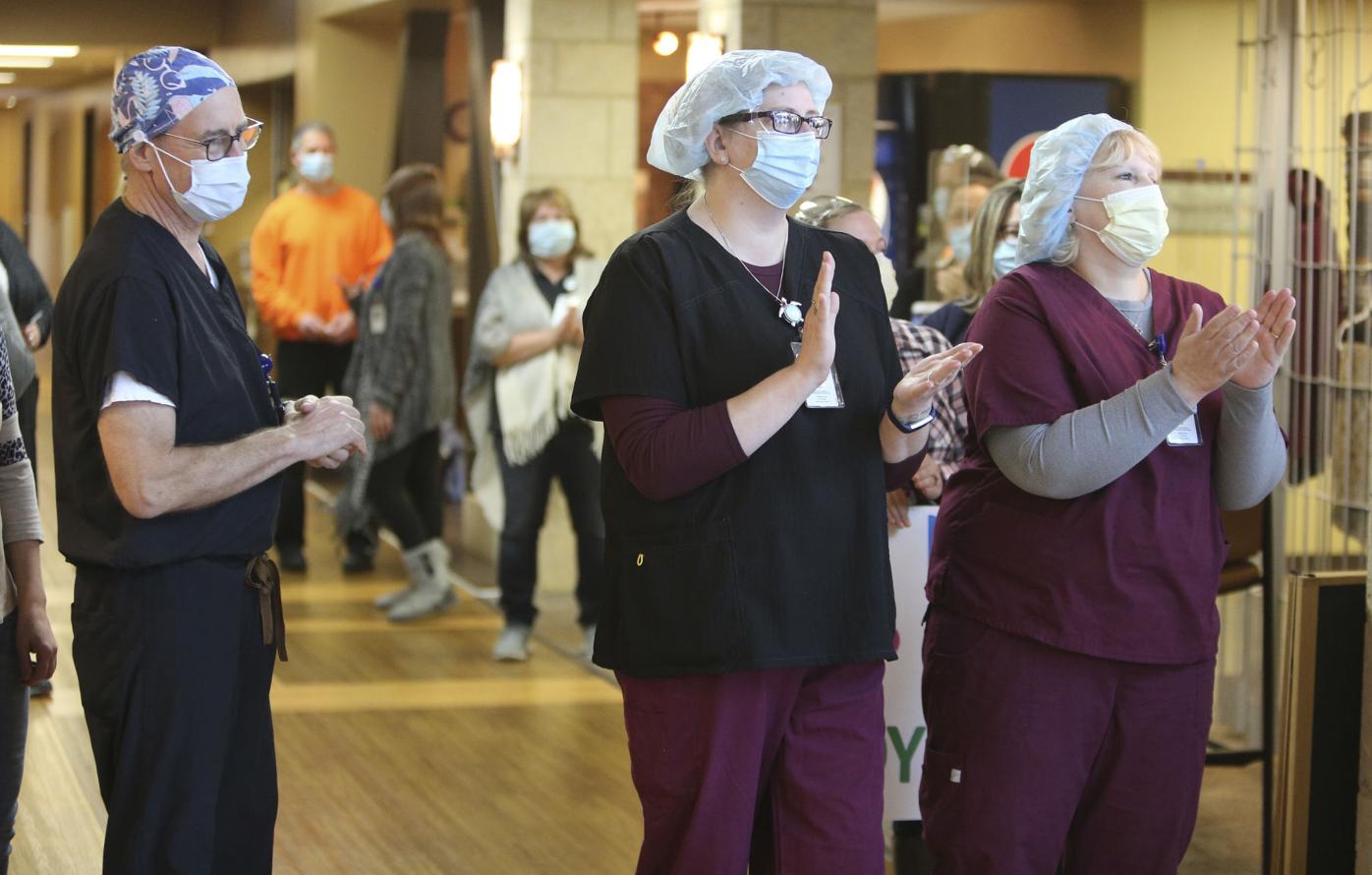 Royce Hansel receives a warm farewell from staff at Guttenberg (Iowa) Municipal Hospital after spending 65 days in the patient care unit with COVID-19. He was discharged Friday.

Hansel takes a last look at his well-wishers as he departs the hospital.

GUTTENBERG, Iowa — Cheers and Survivor’s “Eye of the Tiger” rang through the halls of Guttenberg Municipal Hospital on Friday morning as staff members bid adieu to their longest-staying COVID-19 patient.

Royce Hansel, 76, of Elkader, was released after a 65-day stay. He was diagnosed with COVID-19 on Nov. 8 and checked into the hospital just days later.

“I feel super,” Hansel said as he was preparing to leave. “I couldn’t ask for better people to take care of me. I can’t say enough about them. It was the long haul.”

Hospital staff lined the halls and held homemade signs as Hansel was pushed in a wheelchair to the hospital lobby. Everyone then went outside to see Hansel as he was driven away with an ambulance escort. He still had a breathing tube in his nose as he left.

In a last-minute surprise, several of Hansel’s family members drove past the glass hospital doors to wave to him as he left the facility. Besides his wife, Janan, he hasn’t seen any family since entering the hospital, including a great-grandson who was born in November.

Hansel was admitted to the hospital after developing a COVID-19-related case of pneumonia. He was in critical condition for the first month of his hospital stay.

“It was pretty touch-and-go there for a while,” he said.

She said the hospital was very busy around the time Hansel came in, with six or seven other critical COVID-19 patients already there. None of the patients could be transferred to bigger hospitals because of a lack of available bed space.

Sitzmann said there were several times staff wasn’t sure if Hansel would make it. Parts of his lungs closed on themselves early in his stay, she said, and his oxygen levels often dropped when he tried to sit or stand.

At several critical moments, the hospital made an exception for Hansel’s wife to visit him so he could hear her voice. Typically, the hospital isn’t allowing visitors due to the COVID-19 risks.

“It was important to his care that he saw her and knew he was going home to her,” Sitzmann said.

But hospital staff members across multiple departments were able to work together to help Hansel improve, including through physical and occupational therapy. Sitzmann said some staff members changed their shifts to help take care of patients like Hansel, and she personally started working more night shifts to help out.

The Guttenberg facility is a critical-access hospital, meaning it has resources to provide both acute and skilled care over a patient’s entire recovery process. Sitzmann said many hospitals have to send acute patients to other facilities to complete rehabilitation, but Hansel didn’t even have to switch rooms as staff joined him through every step of his recovery.

Hospital CEO Tim Ahlers said the work that hospital staff has done for Hansel and all of the other COVID-19 patients has been incredible over the past year. He added that the rural hospital’s capabilities to care for COVID-19 patients is impressive, as it has the equipment to provide high-flow oxygen therapy if patients should reach such a critical need.

“For a small town, we have a really nice hospital facility,” he said. “But what sets us apart really is the hospital staff.”

Many of the staff’s signs made for Hansel’s mini-parade had messages of “We will miss you,” a sentiment shared by Sitzmann, who said she would love to keep Hansel as her adoptive grandfather.

“He didn’t give up. We didn’t give up,” Sitzmann said with tears in her eyes. “... He’s a testament to never giving up hope, to always try and miracles do happen.”

Hansel said he plans to “take it easy” until spring to keep his recovery process going in a positive direction.

“Thanks to everyone, from the bottom of my heart,” Hansel said before finally heading home.