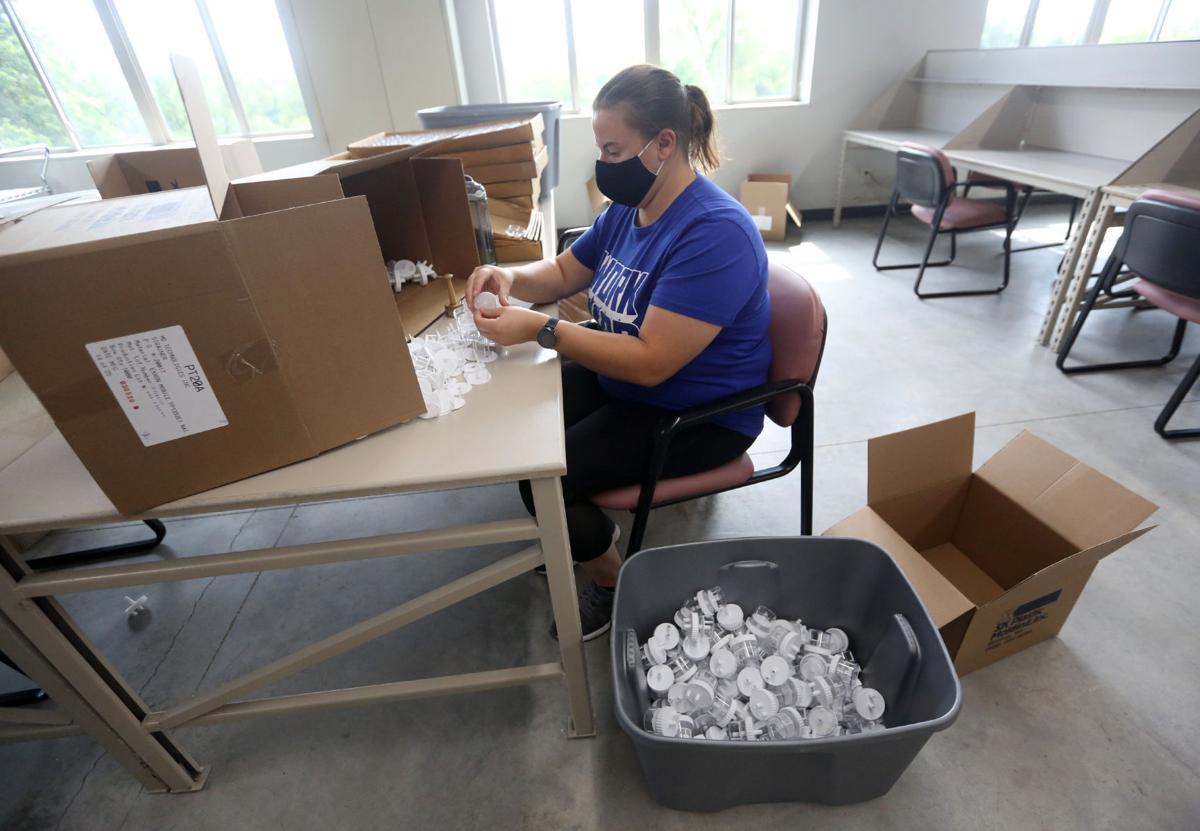 Naomi Kimball assembles medical supplies at The Workshop in Galena, Ill., on Friday. 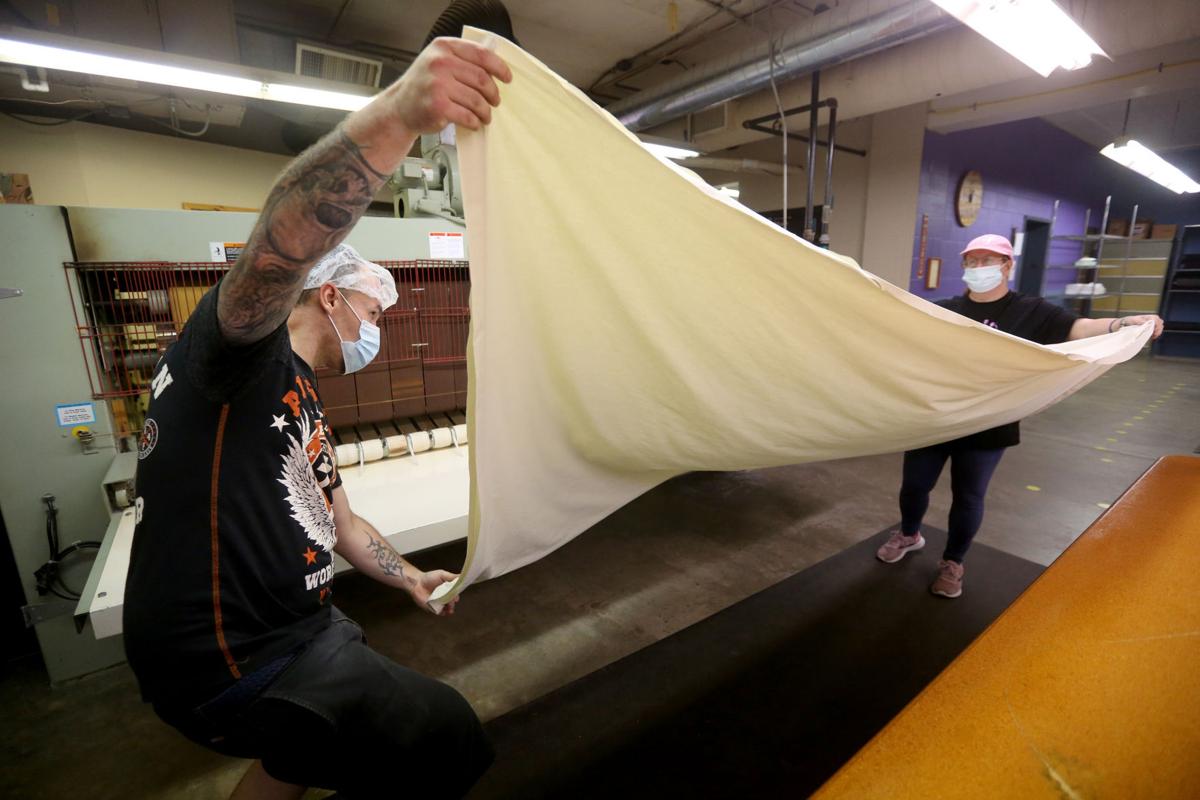 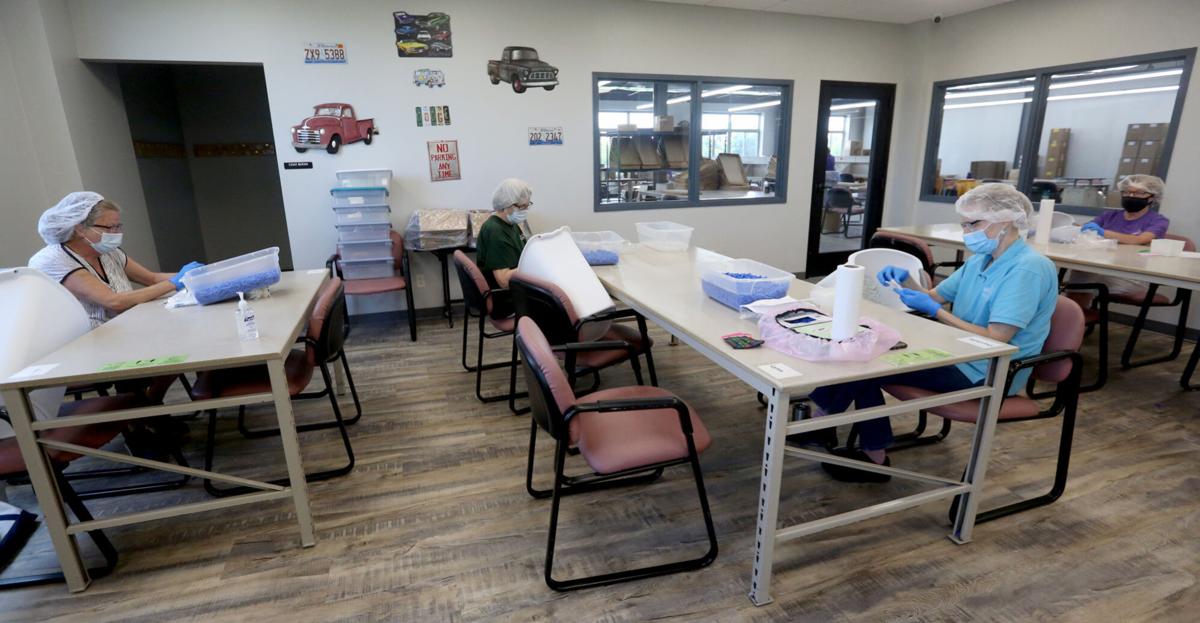 Staff members package catheters at The Workshop in Galena, Ill., on Friday, July 31, 2020. 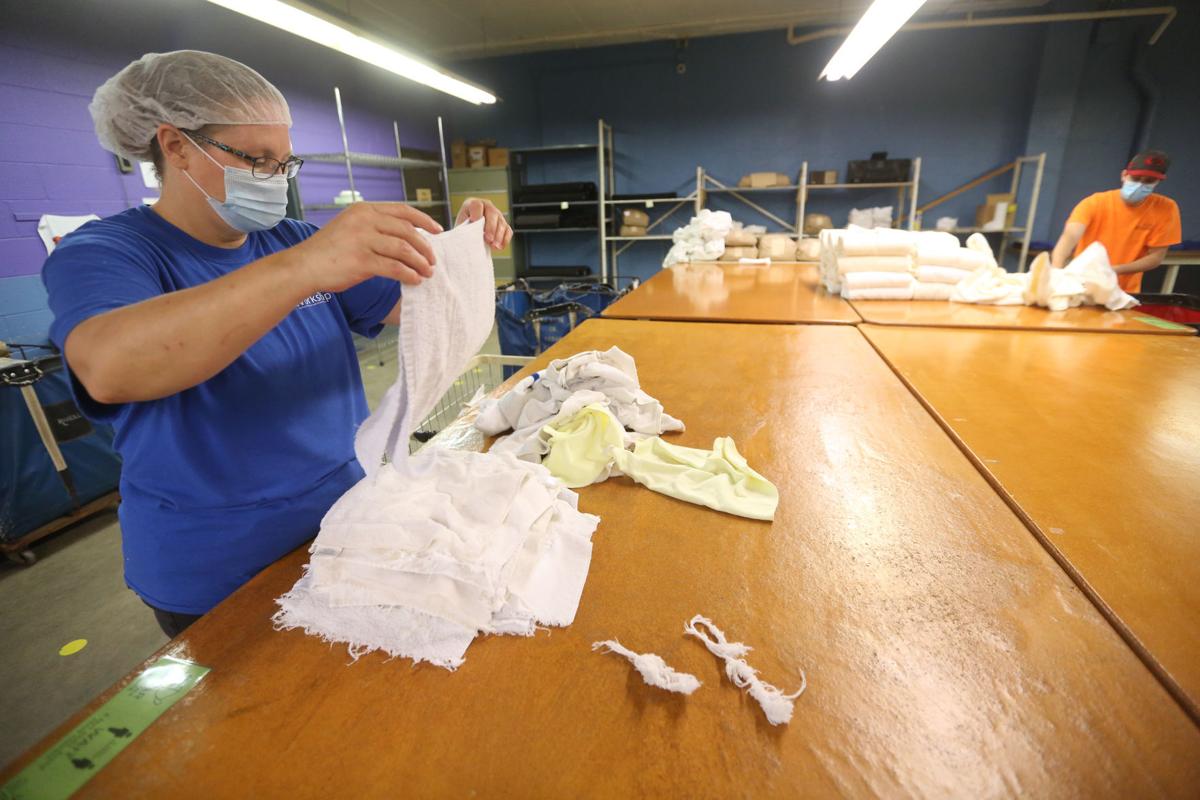 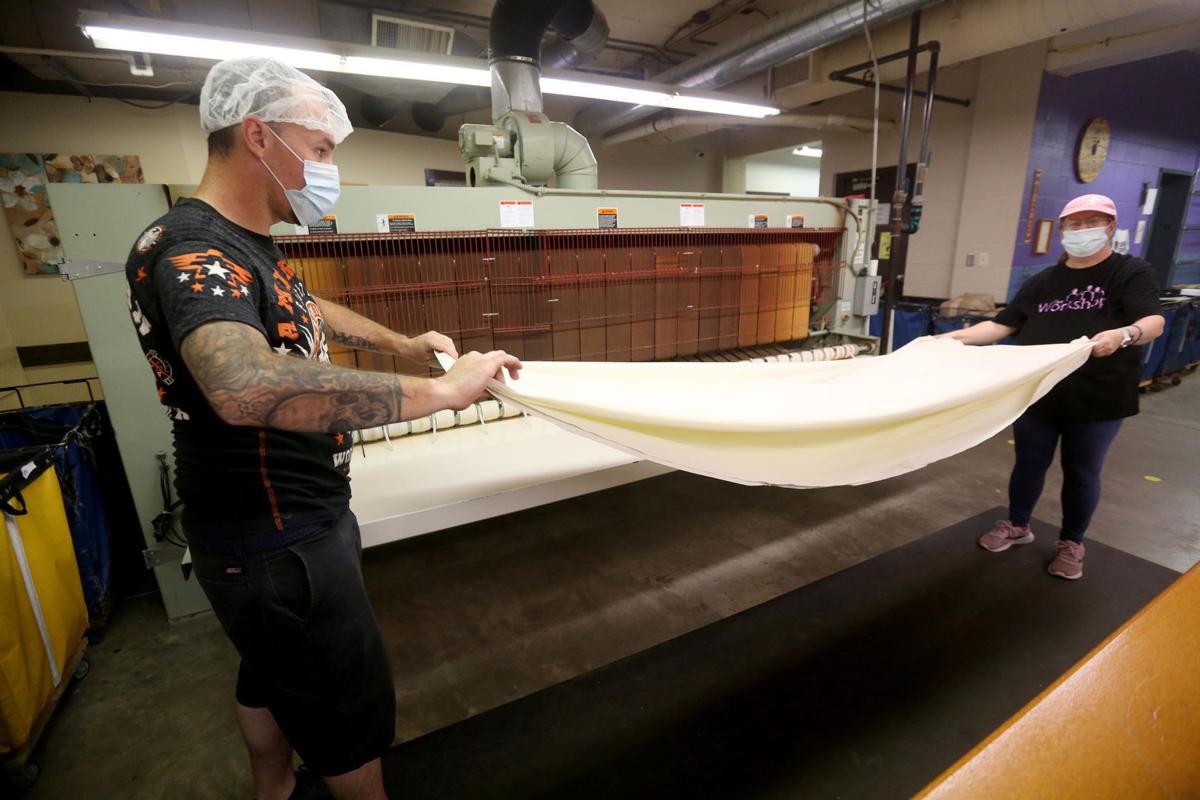 Naomi Kimball assembles medical supplies at The Workshop in Galena, Ill., on Friday.

Staff members package catheters at The Workshop in Galena, Ill., on Friday, July 31, 2020.

When the COVID-19 pandemic hit in mid-March, staff at Hills and Dales Child Development Center in Dubuque felt the impact immediately.

The nonprofit’s day programming, which serves about 40 people, quickly ended. Attendance fell at the child care program and autism clinic as well, causing a “considerable” loss of revenue, according to CEO Marilyn Althoff.

“We have one revenue source,” Althoff said. “There was no option for us to bring in any other revenue except our service revenue.”

Even as income was falling, Hills and Dales needed to maintain staffing levels to continue to care for the 59 residents who live at the center, especially now that many of those residents would not be attending school during the day. It was a delicate balancing act — the need to keep staff employed, juxtaposed with the reality of declining revenue — especially because about 87% of the Hills and Dales budget goes to employee wages and benefits, according to Althoff.

But receiving between $2 million and $5 million in federal Paycheck Protection Program loans made that balancing act a little easier.

“The (PPP) was really our lifeline to assure we could sustain ourselves through this pandemic and … continue to provide quality services,” Althoff said.

Many other local nonprofits likely received loans below $150,000, according to Jenna Manders, director of Strategic Relations at the Community Foundation of Greater Dubuque.

“While (federal aid) might not have amounted to $150,000 for those organizations, it really did help alleviate staff and overhead costs, which was helpful for them to get through the unknown,” she said.

Like Hills and Dales, many local nonprofits needed to keep staff on the payroll to maintain essential services. From hospitals to schools to social service organizations, nonprofits experienced economic fallout of COVID-19 just as for-profit businesses did.

The opportunity to apply for PPP funding, combined with creative solutions, allowed them to weather the storm, Manders said.

“For a lot of nonprofits... the pandemic was quite a shock in that their whole model had to change,” she said. “(PPP) allowed for that creative thinking to happen and not have to worry about the stress of the finances.”

Creativity was certainly on display at The Workshop in Galena, Ill., as the nonprofit attempted to pivot from its normal mission of providing work experience for adults with intellectual and developmental disabilities.

When COVID-19 hit, the people it serves weren’t able to come into work, according to Lynn Berning, The Workshop’s executive director.

“We knew that the Department of (Human) Services would keep them at home, and that’s where we wanted them to be,” Berning said. “Safety was number one for us.”

However, The Workshop needed to fulfill contracts with local businesses, especially because work packaging medical supplies made it an essential business. So it came up with a solution: full-time staff would do the laundry, package the medical supplies and complete the jobs typically completed by the people they serve.

But with declining revenue, it would have been difficult to keep all the staff on the payroll — which is where the $350,000 to $1 million in PPP funding came in handy.

“We had to do their jobs to help them keep their jobs,” Berning said. “PPP allowed us to reassign our staff so that the individuals we serve could come back to their jobs when it was safe.”

Other local nonprofits benefited from PPP funding as they battled the virus on the front lines. Among them was Grant Regional Health Center in Lancaster, Wis., which received $2 million to $5 million in PPP funding.

“PPP allowed us to support our employees and not furlough staff during the stay-at-home order when patient volumes drastically declined,” wrote David Smith, President and CEO of GRHC, in an email to the Telegraph Herald. “As a small, rural, independent, critical access hospital, funding came at a very crucial time when we didn’t know if weeks would turn into months of lost revenue.”

PPP funding was only available to small businesses and nonprofits with fewer than 500 employees, according to criteria from the Small Business Administration (SBA).

However, religious organizations benefited from an exemption.

According to a July 10 report from the Associated Press, many Catholic dioceses would have been ineligible for PPP funding because “between their head offices, parishes and other affiliates, their employees exceed the 500-person cap.” But following government lobbying by Catholic organizations, the SBA granted religious organizations an exception to the 500-employee rule.

“Both organizations have abided by the guidelines of the program and have kept people employed during the COVID-19 pandemic,” the statement noted. “United States Council of Catholic Bishops and archdiocesan officials emphasize that the PPP was designed to protect the jobs of Americans from all walks of life, regardless of whether they work for for-profit or non-profit employers, faith-based or secular.”

Another group of local nonprofits that benefited from an exception to the rule were private colleges.

Under the initial terms of the PPP loans, colleges were required to count student workers as employees. This pushed many private colleges over the 500-employee threshold.

However, on April 28, the U.S. Treasury and SBA posted additional guidelines clarifying that colleges should exclude work-study students when determining the number of employees.

The change allowed local private institutions such as Loras College to apply for PPP funding, according to Mike Doyle, vice president for advancement and treasurer.

Doyle said that the $2 million- $5 million the institution received helped offset unexpected expenses. These included the refunding of room and board payments when students left campus early this spring, as well as lost revenue following the cancellation of the summer Loras All-Sports Camp.

“The PPP really helped us, and it did exactly what it was designed to do for Loras, in terms of keeping people employed and working,” he said. “With all the work that needed to be done this spring and summer with our faculty and staff, it would have been difficult if we would have had to reduce staffing.”

As at many nonprofits, multiple revenue streams dried up simultaneously at Holy Family, according to director of finance Bonnie Sigwarth. Attendance at early childhood care centers declined and churches, which subsidize the schools, closed their doors.

“Having access to the PPP loan was crucial for our organization to keep us operating … so we can focus our attention on educating our children,” she said.

While PPP loans provided a lifeline for many nonprofits, they were certainly not a fix-all solution. Many questions remain regarding loan forgiveness, and the arrival of further federal aid is uncertain, even as the economic impacts of COVID-19 continue to plague businesses both locally and nationwide.

“We were hopeful like, I think, many businesses, that by now we would be on the other side of COVID, but that’s not the case,” Althoff said.

“COVID-19 is going to have a ripple effect for many months, and I would be surprised if any business disagreed with that,” she said.

However, local nonprofits have already shown their versatility and adaptability during this difficult time, according to Manders.

“I think it proved that nonprofits are resilient, and they have the ability to react in a way that some organizations can’t,” she said. “So many organizations had to pivot what they were doing, and provided so many services to our most vulnerable populations.”

Whether it was The Workshop’s staff taking on the jobs of the people they served, or private schools shifting their classrooms online, nonprofits’ flexibility has helped them make the most of federal aid during a time of economic uncertainty.

“The dedication and commitment of our students, and this area and this community, has been, to me, inspirational,” Doyle said. “It’s going to serve us well as we move forward.”

Database: All local companies who received at least $150,000 in PPP funds