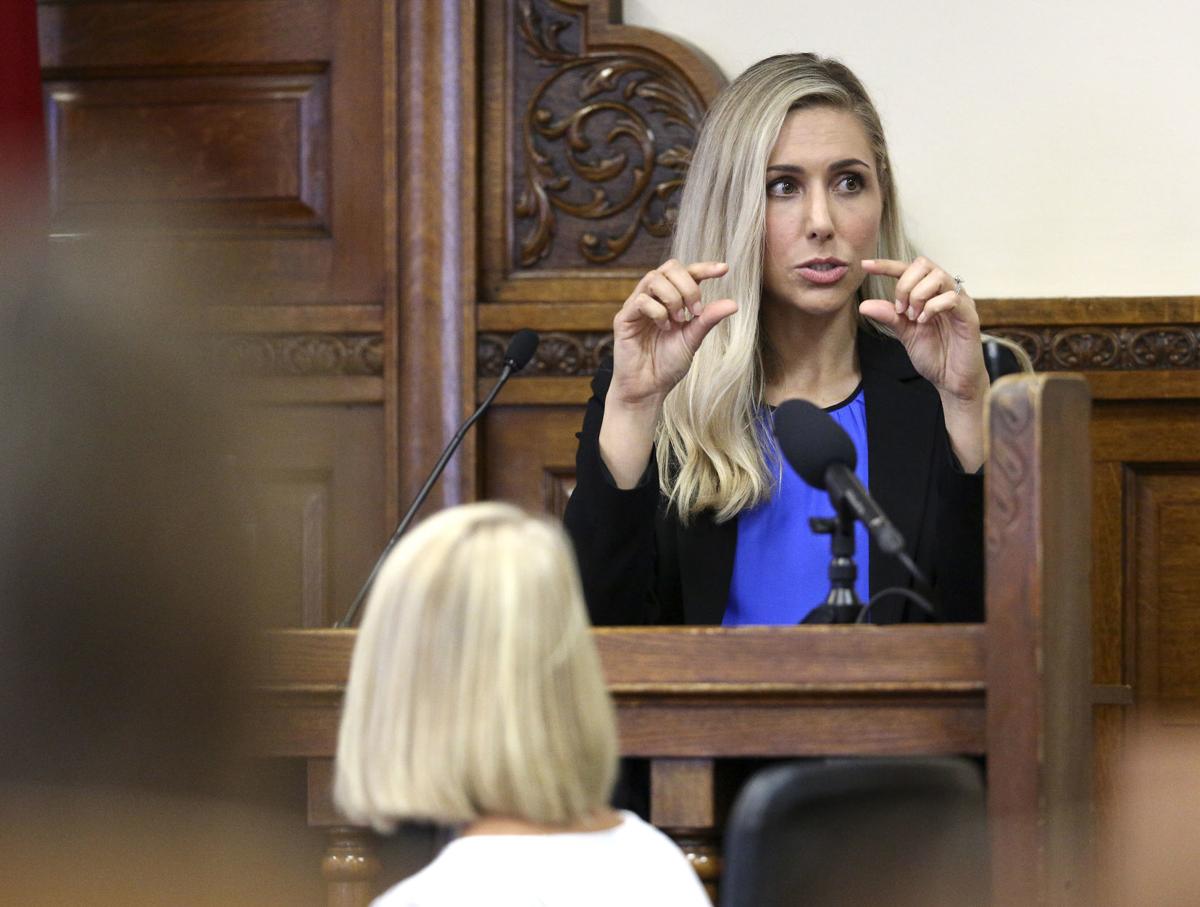 Dr. Kelly Kruse, a forensic pathologist with the Iowa State Medical Examiner’s Office, describes injuries she observed while performing an autopsy on Amy Mullis during the first-degree murder trial of Todd Mullis, 43, at the Dubuque County Courthouse on Wednesday, Sept. 18, 2019. 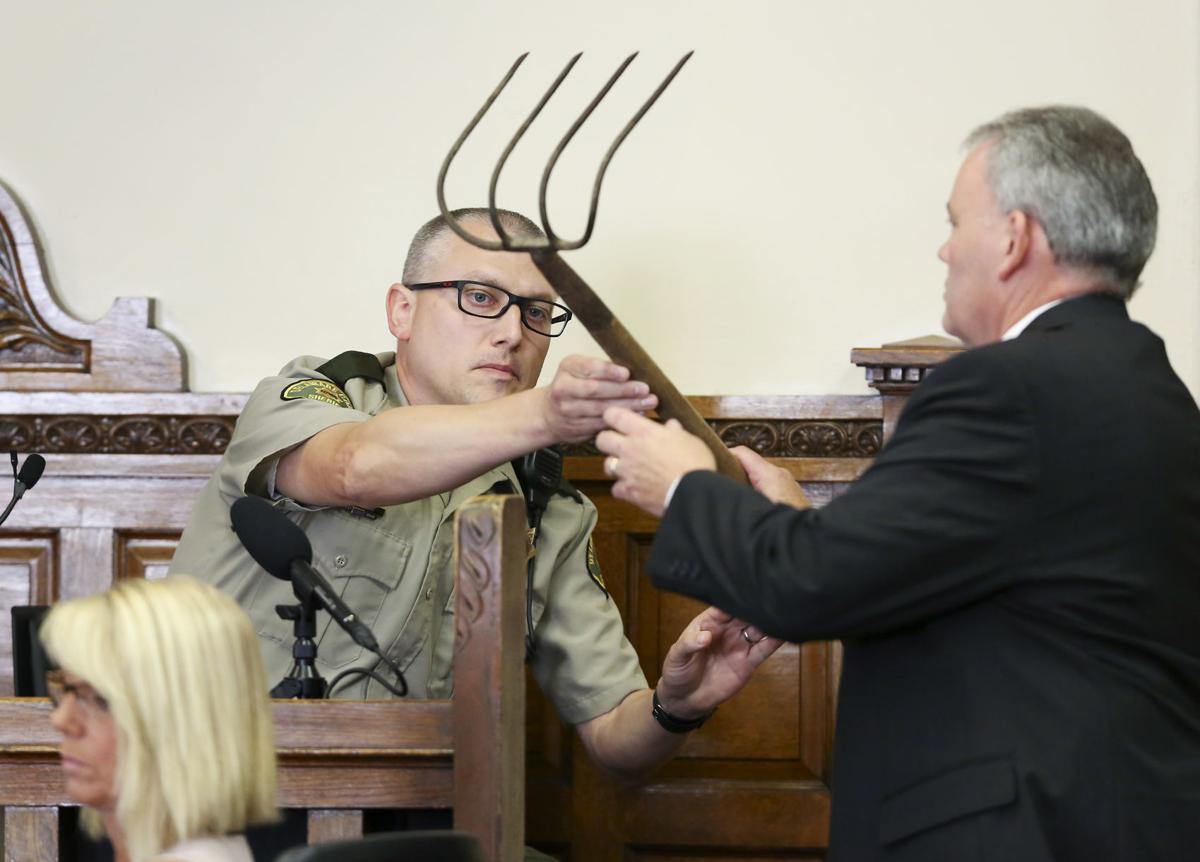 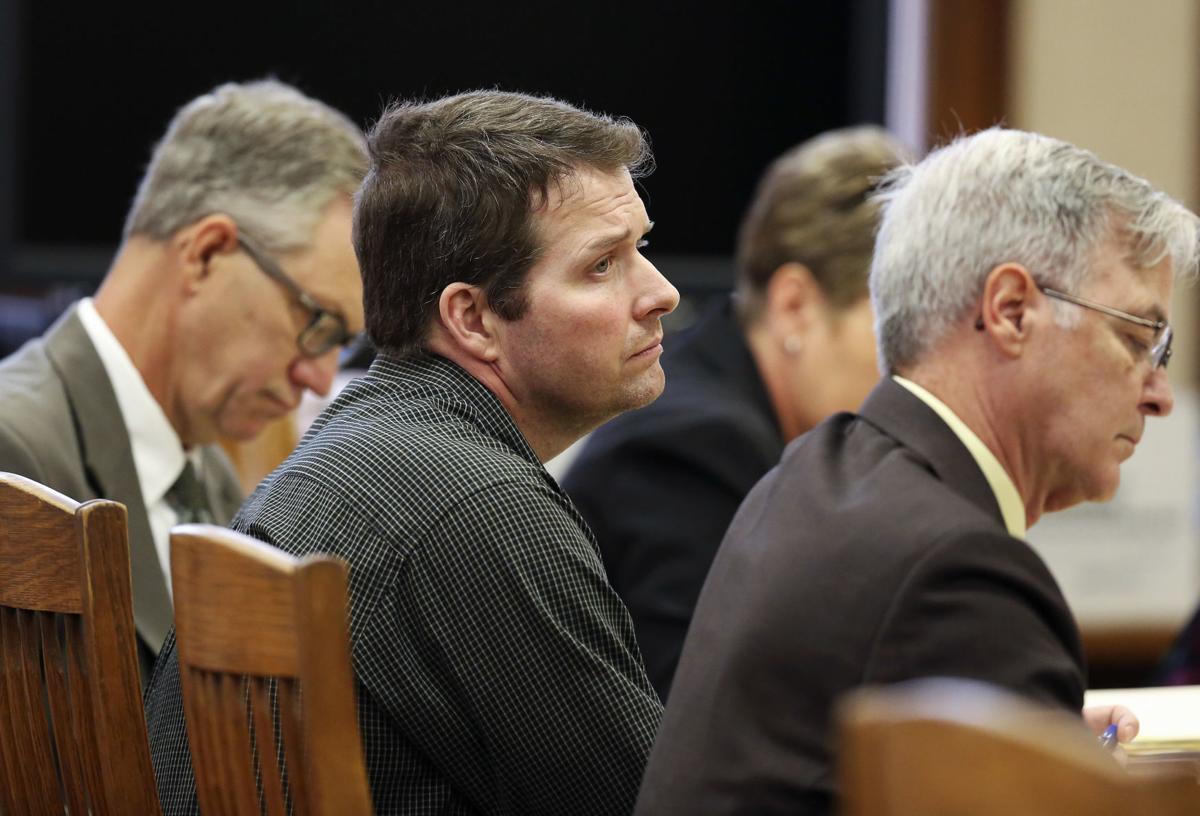 Todd Mullis (center) watches the proceedings at his trial in Dubuque. 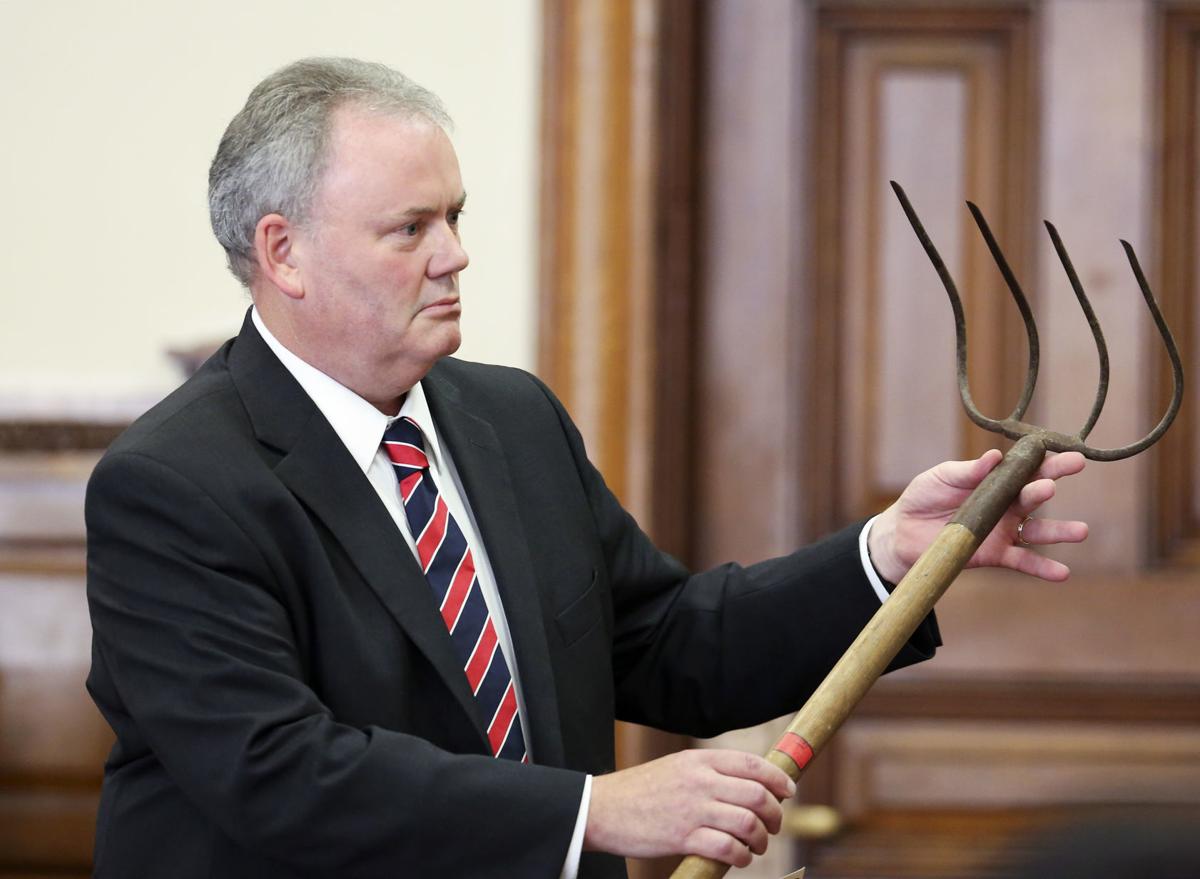 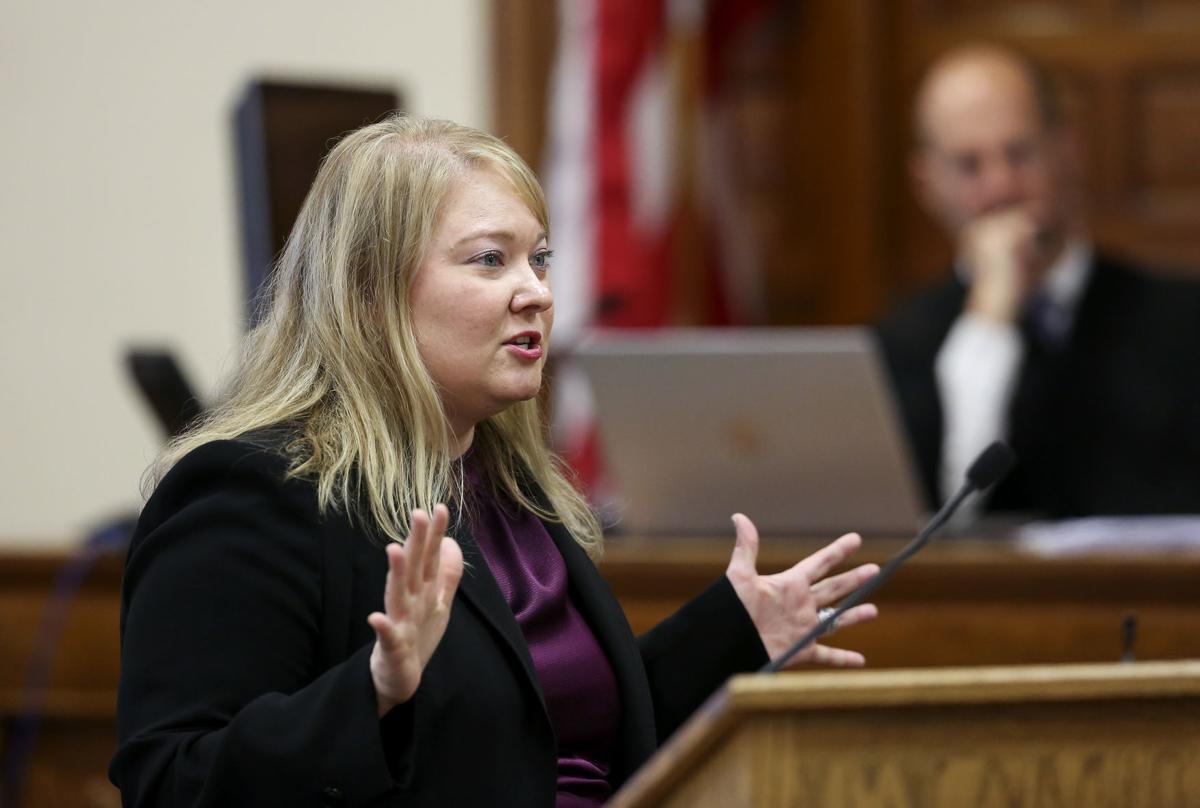 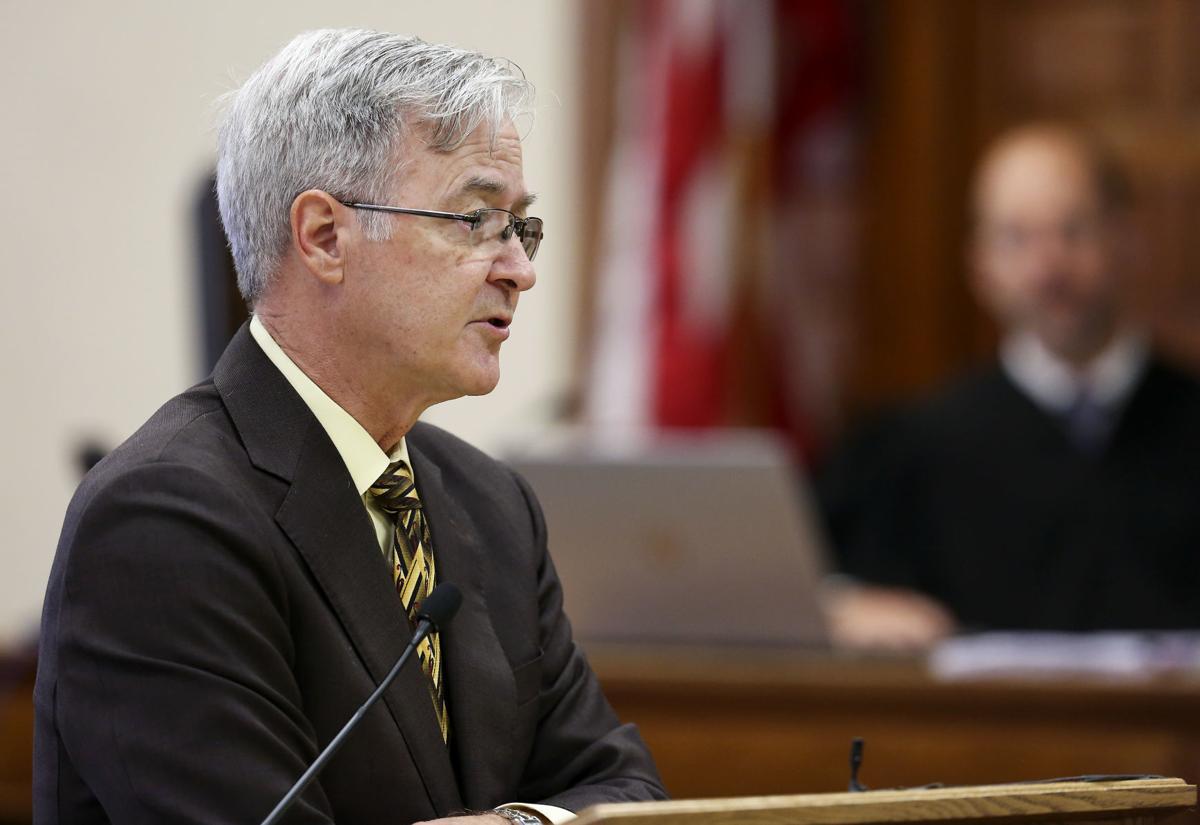 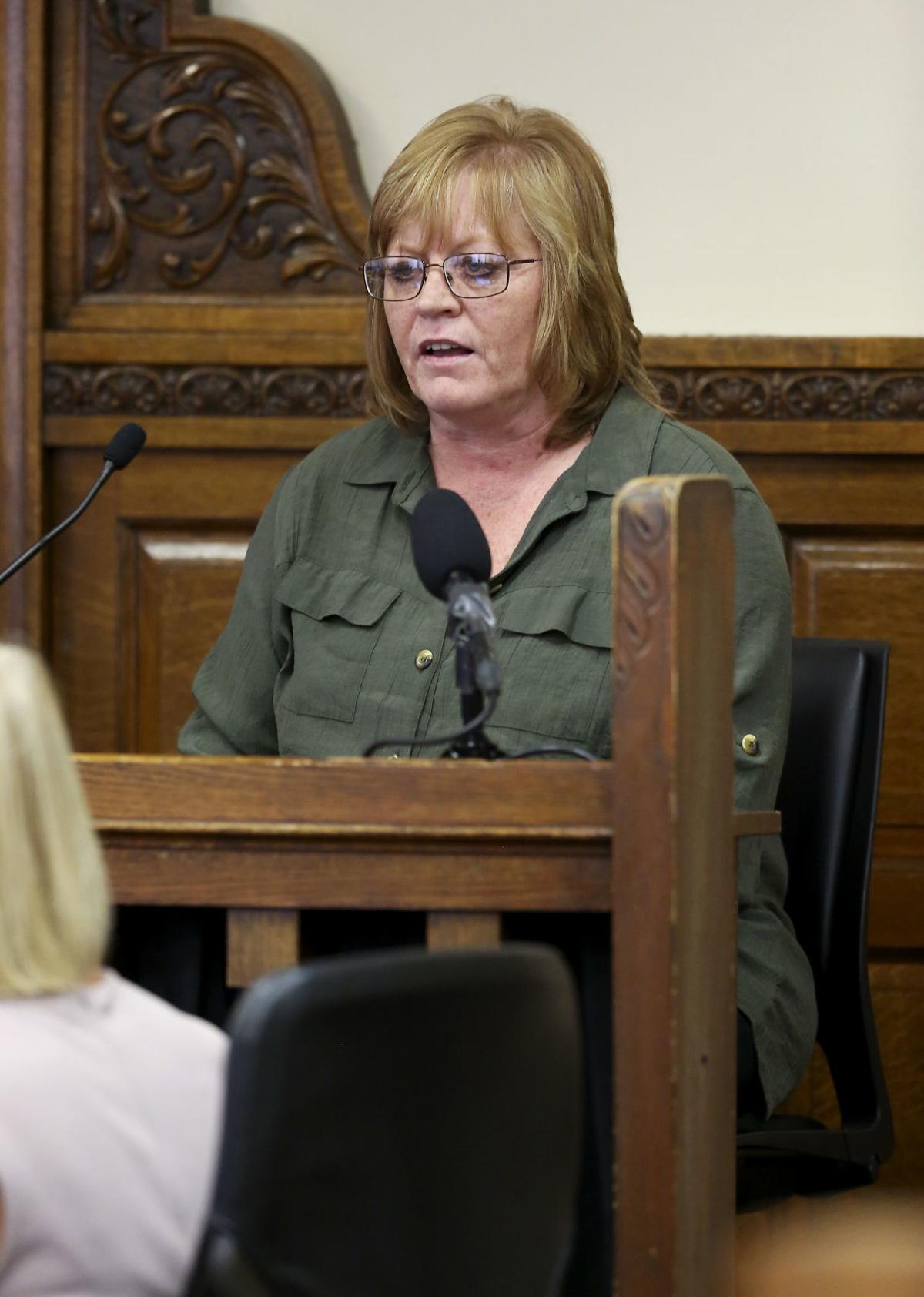 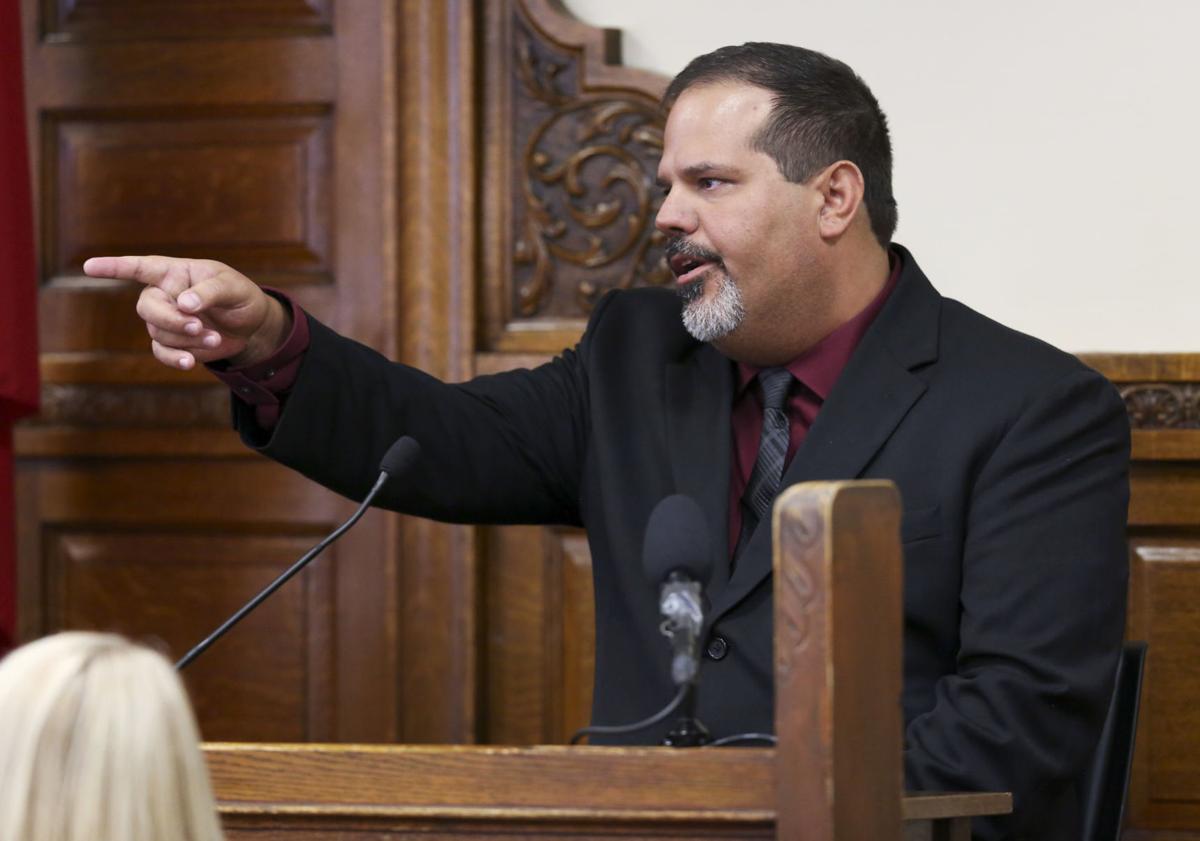 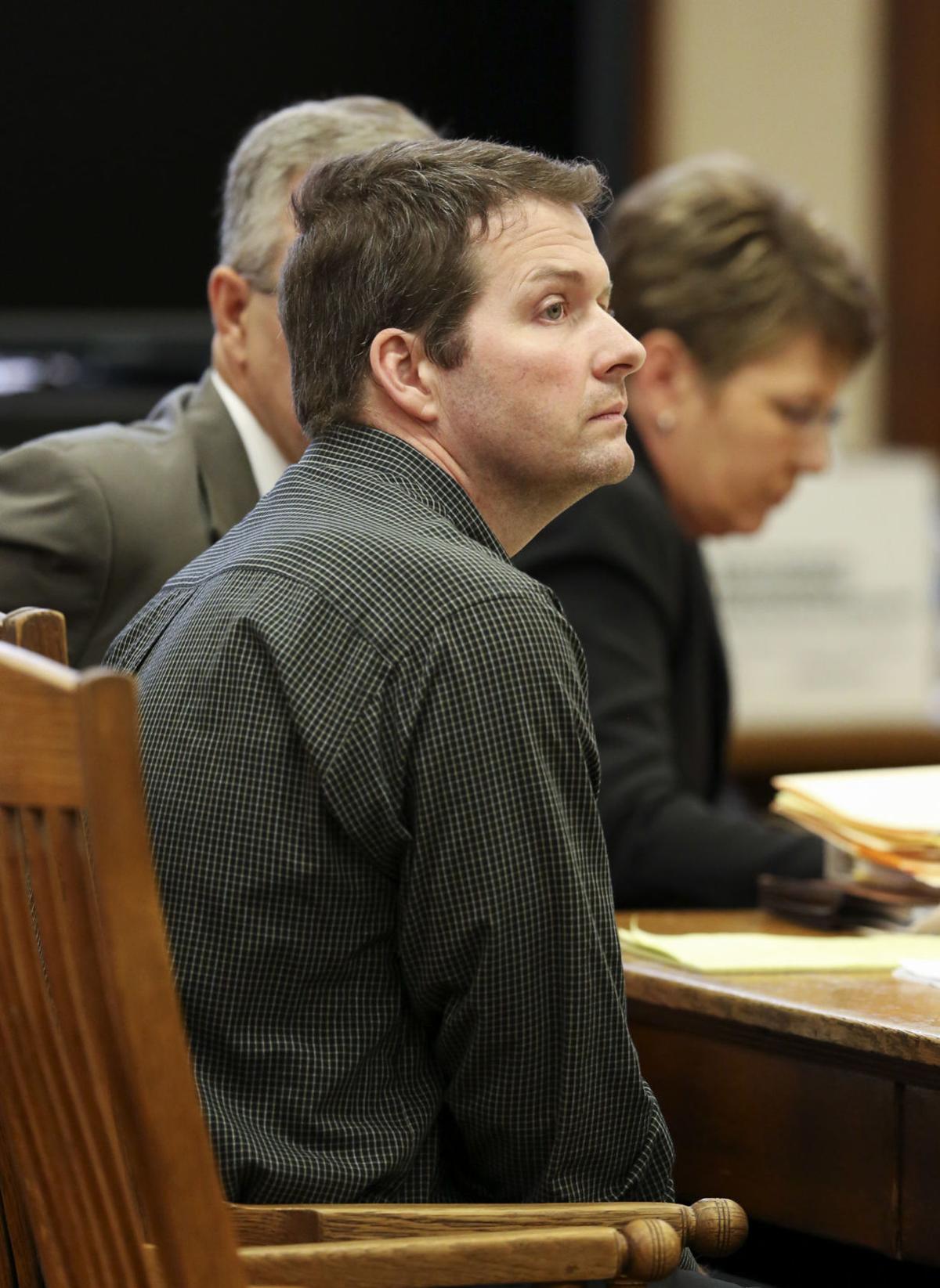 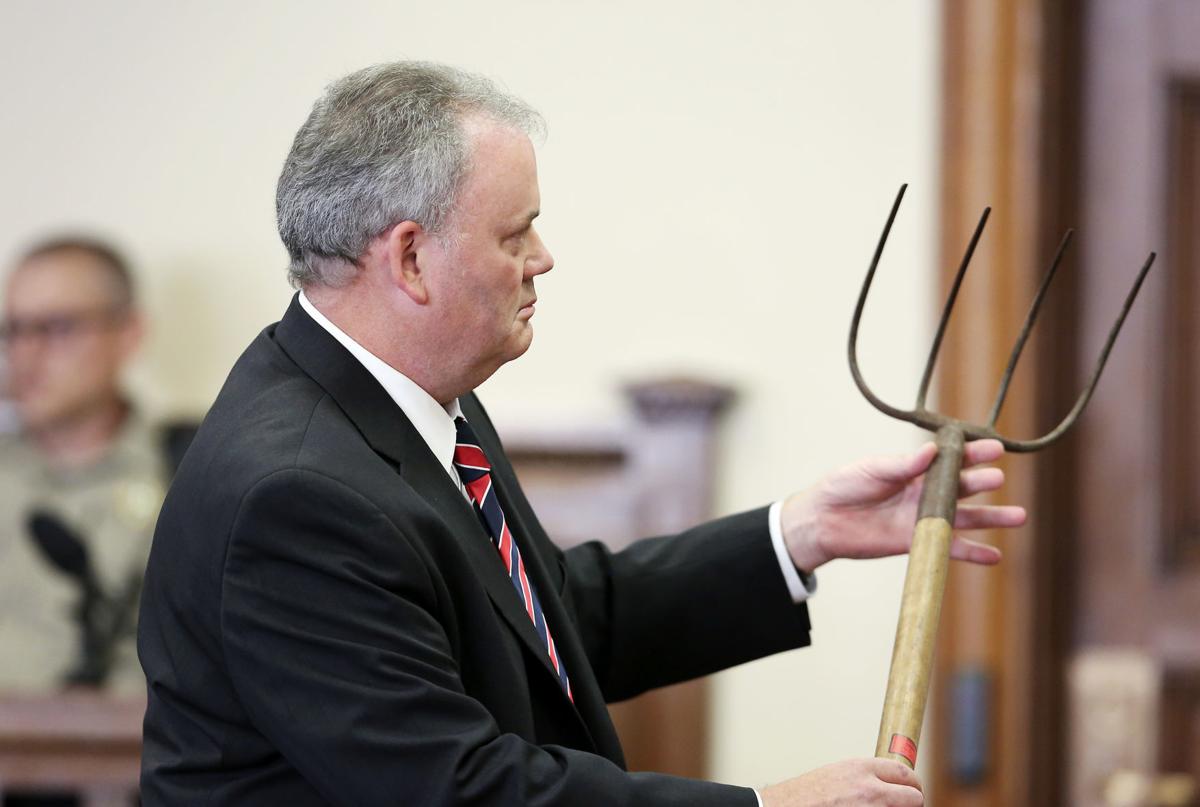 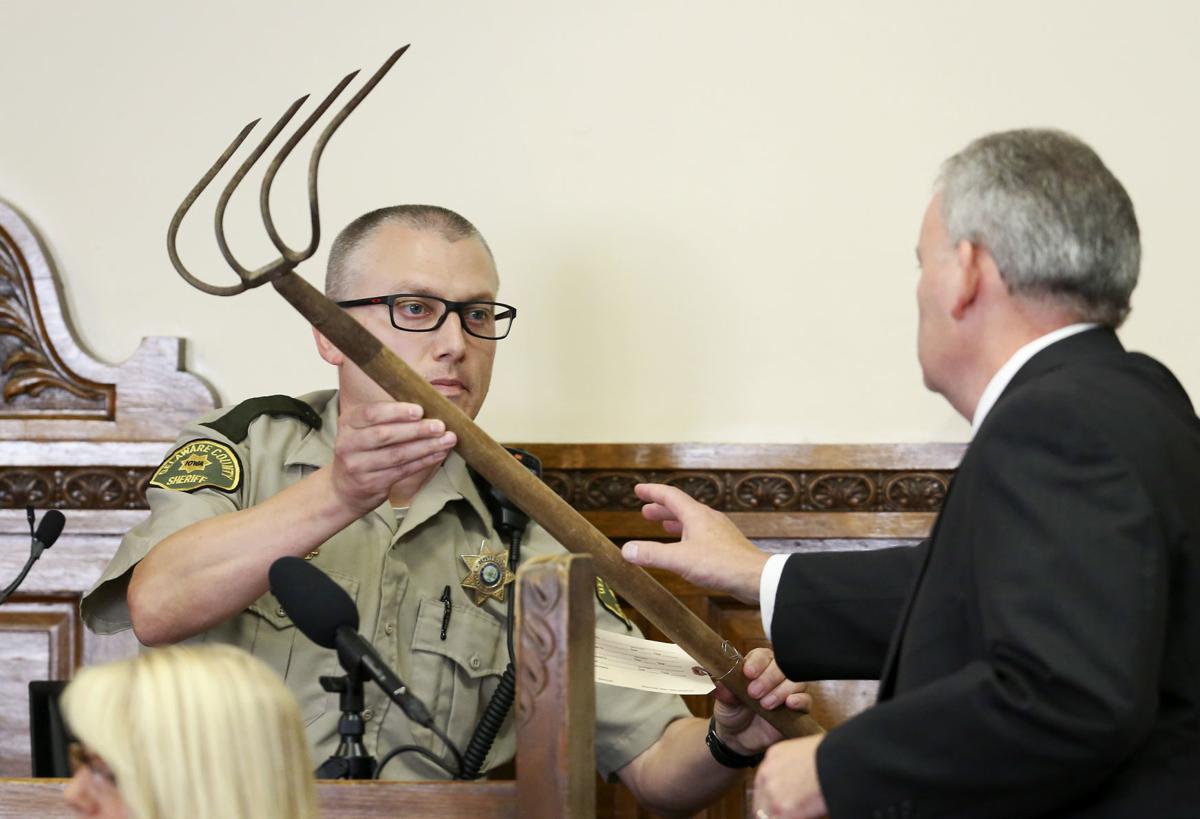 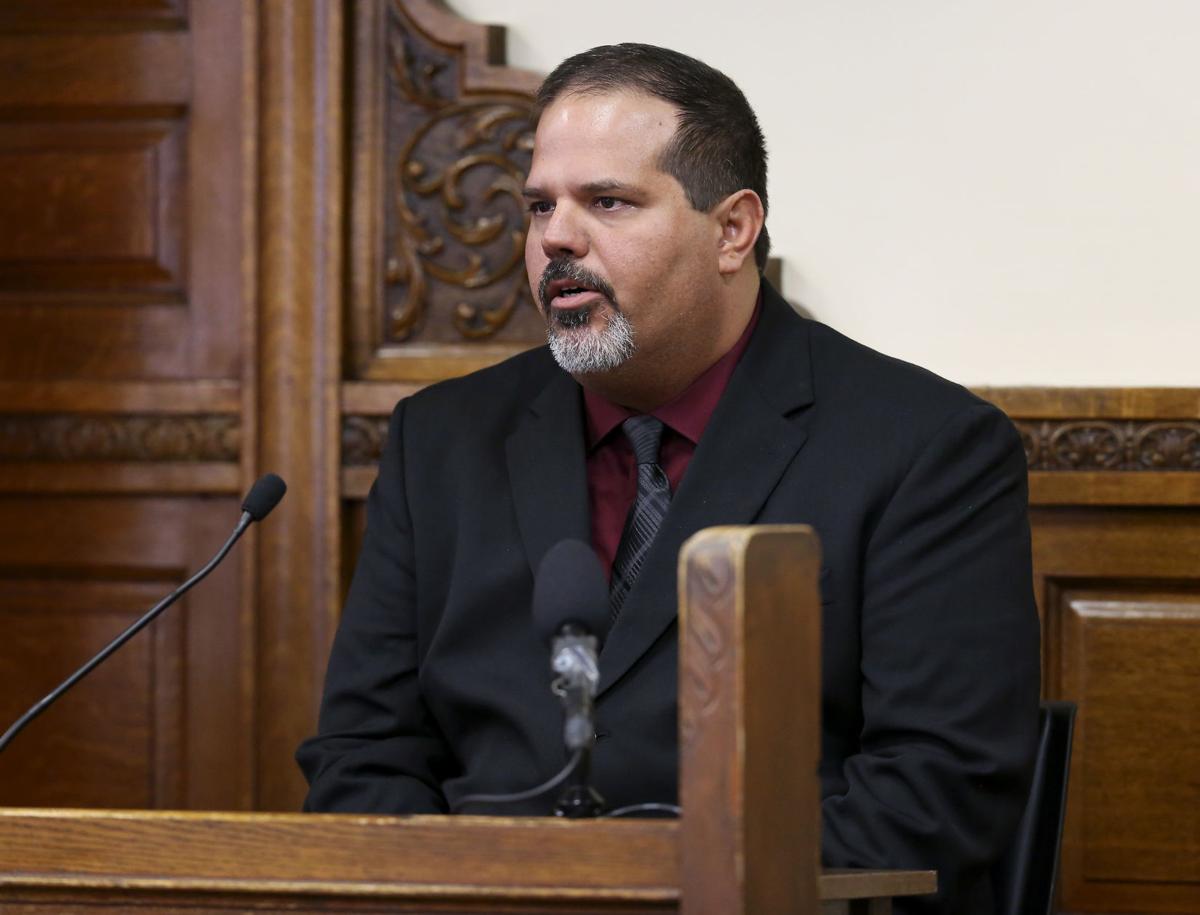 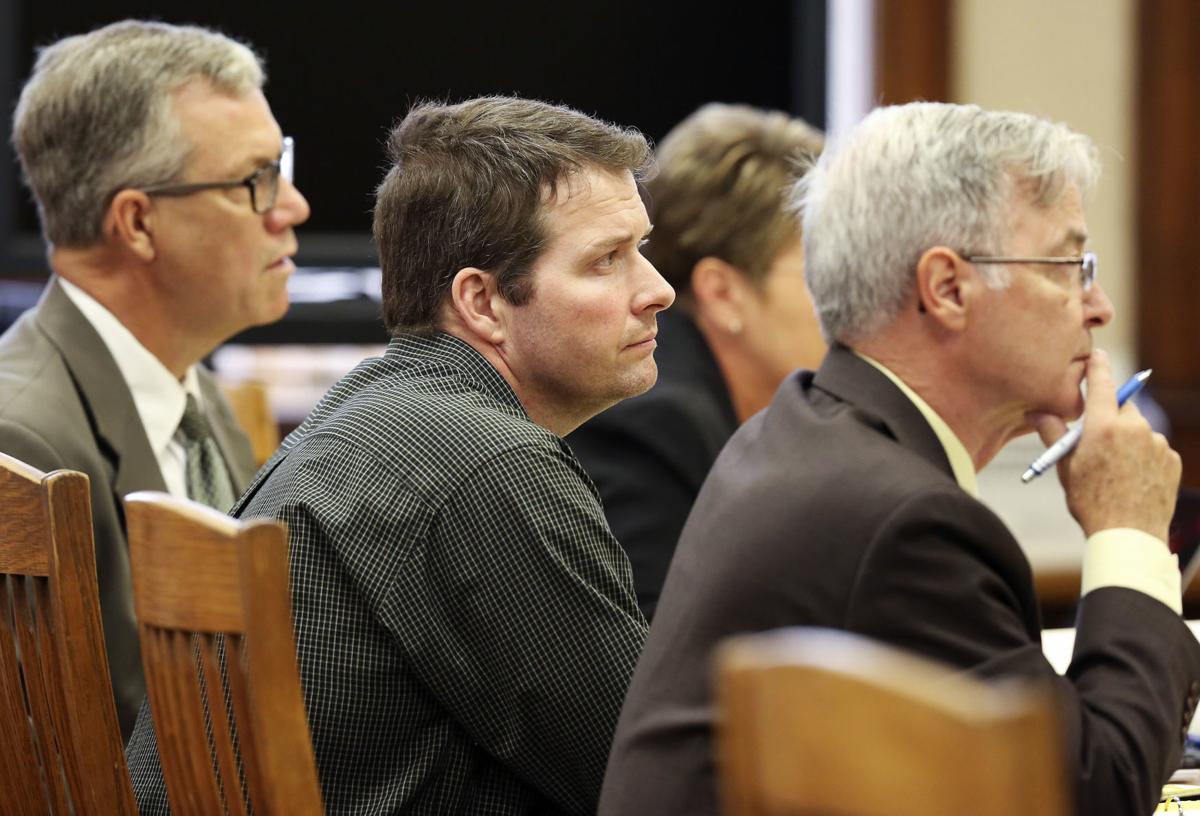 Dr. Kelly Kruse, a forensic pathologist with the Iowa State Medical Examiner’s Office, describes injuries she observed while performing an autopsy on Amy Mullis during the first-degree murder trial of Todd Mullis, 43, at the Dubuque County Courthouse on Wednesday, Sept. 18, 2019.

Todd Mullis (center) watches the proceedings at his trial in Dubuque.

The forensic pathologist who performed an autopsy on Amy L. Mullis testified today that the Earlville, Iowa, woman was impaled by a corn rake "at least twice, possibly three times."

Dr. Kelly Kruse, of the state medical examiner's office, testified at the first-degree murder trial of Todd M. Mullis that the direction of the sharp-force puncture wounds to Amy Mullis' torso led her to that conclusion.

"She would have to be impaled by the rake at least twice, possibly three times," Kruse said.

Kruse testified that the cause of Amy Mullis' death was the sharp-force injuries to her torso.

"The manner of death was homicide," Kruse said.

Kruse also testified that the autopsy revealed blunt-force injuries to Amy Mullis' left jawline and in the areas of the knuckles of both hands.

Scrapes and bruises found on Amy occurred immediately before or during her death, Kruse testified. Some wounds on her hands could indicate defensive injuries suffered during a struggle.

Under cross-examination by defense attorney Gerald "Jake" Feuerhelm, Kruse testified that although Amy Mullis' fingernail clippings were collected during the autopsy, Kruse did not know if any DNA evidence was recovered that might have indicated a defensive struggle.

The trial continues at 1:15 p.m. today after a lunch break.

Terri Staner, a close friend of Amy L. Mullis, testified this morning that her friend's marriage to Todd M. Mullis was at a crossroads as summer turned to fall in 2018.

"Amy didn't know how to go on with her life," Staner said.

Staner took the witness stand today on the second day of testimony in the first-degree murder trial of Todd Mullis, 43, of Earlville, Iowa. He is accused of fatally stabbing Amy Mullis with a corn rake on their farm on Nov. 10.

Staner testified this morning that Amy was having an affair and that rumors of it were circulating in the community.

"She was telling me, 'I'm still not sure what I should do,'" Staner said of her conversations with Amy. "When she very first told me about the affair, I was so angry with her. I said, 'You're putting yourself in a difficult place. He is going to kill you.' Todd is the person you don't mess with."

Staner testified that she tried to protect her friend while also avoiding answering questions from a concerned Todd Mullis. Staner said she did not want to lie to Todd Mullis.

"I felt like I needed to protect Amy because she needed time to decide what to do," Staner said.

A prosecutor on Tuesday argued that an Earlville, Iowa, man killed his wife by stabbing her with a corn rake and then attempted to make it look like an accident.

On the witness stand, Todd M. Mullis’ son said his father left his view for a period of time on the morning of the killing, and a doctor said Amy Mullis’ injuries were not consistent with an accident.

“I found it very difficult to see how four (rake) tines could cause six wounds in a single impact,” said Dr. Craig Borden Thompson during his testimony.

But one of Todd Mullis’ attorneys said in his opening statement that the defense doesn’t dispute that Amy Mullis was killed. Rather, they dispute the assertion that her husband is the killer.

“You will find there is a reasonable doubt,” said defense attorney Gerald “Jake” Feuerhelm to conclude his opening statement.

Todd Mullis, 43, faces a charge of first-degree murder in connection with the Nov. 10 death of his wife, Amy Mullis, 39. A conviction on that charge would result in an automatic sentence of life in prison without the possibility of parole.

His trial was moved from Delaware County to Dubuque as a result of pretrial publicity, and Tuesday marked the first day of testimony.

Iowa Assistant Attorney General Maureen Hughes said in her opening statement that the death of Amy Mullis represented the execution of a plan her husband had been formulating for months.

Hughes painted Todd Mullis as a man irate over an affair his wife was having and one who was in fear of losing his farm if she divorced him.

“He wasn’t going to let Amy take half of his farm,” Hughes said. “Being a farmer means everything to him. The defendant had to find a way to keep that farm.”

When Todd Mullis told investigators that his wife had fallen on the corn rake, “nobody believed his story,” the prosecutor said.

“Doctors could tell Amy was struck at least two times in her back,” Hughes said. “It was not an accident.

“Amy was fearful of the defendant. She was afraid if Todd found out she was in an affair, he would kill her. The evidence in this case is overwhelming, and the trail of evidence leads to only one place: where the defendant sits in this courtroom.”

In his opening statement, Feuerhelm agreed that Amy Mullis was killed and that the farm was important to her husband.

“But not so important that he would murder the mother of his children,” Feuerhelm said.

He said the identity of the killer is unclear.

Jeff Fuller said his sister was not happy in her marriage and talked about getting a divorce.

Eileen Fuller testified that Todd Mullis knew about an affair his wife had in 2013. In the summer of 2018, he expressed concerns that Amy Mullis was having another.

Trysten Mullis testified on Tuesday, though he was not in the packed courtroom. His testimony was shown via closed-circuit television.

Authorities have said Todd Mullis reported that he, Amy and their now-14-year-old son, Trysten, were working in the hog barn at the family’s farm on the morning of Amy’s death, preparing it for the arrival of young pigs. Amy was cleaning light fixtures but said she was dizzy. She recently had undergone a surgical procedure.

Todd said he instructed his wife to stop cleaning the fixtures and go to a shed on the property to retrieve a pet carrier while he and Trysten continued working.

Trysten testified that he and his father worked in the hog barn for about an hour and a half after his mom left.

The son said he lost sight of his dad at some point during that time, while the teen was twice getting drinks of water from a hose near the office of the barn.

In a previous deposition, Trysten Mullis stated that he lost sight of his dad for about one minute, 40 seconds.

Testifying Tuesday, the teen said that time estimate was inaccurate, though he did not provide a new estimate.

He said his dad eventually asked him to check the shed for the pet carrier when they did not see it sitting outside.

Trysten found his mother unresponsive and with a corn rake protruding from her back.

“She was just inside the door. She was on her hands and knees face down,” Trysten Mullis testified. “I yelled for my dad.”

Under cross-examination, Trysten testified that he didn’t see tears in or blood on his father’s clothes and that his father did not look distraught prior to finding Amy.

Jurors listened to a 911 call that Todd Mullis placed while driving Amy and Trysten toward Regional Medical Center in Manchester.

Delaware County Sheriff’s Department Deputy Luke Thomsen was the first responder to arrive on the scene. He said Amy Mullis was unresponsive and not breathing.

“There was quite a bit of blood on her clothes and bruises on her jaw and arm,” Thomsen said.

Thomsen said the 911 dispatcher who sent out the emergency call indicated that Amy Mullis had fallen on a corn rake in a shed at her farm.

Fellow Deputy Eric Holub testified that Thompson, the director of emergency medical services at Regional Medical Center in Manchester, raised concerns that the wounds did not support that story.

“(The doctor) was concerned that there were too many holes on her back,” Holub said. “He wanted me to take a photo of the corn rake to see how wide it was.”

The doctor also requested to see the rake.

The trial is set to resume at 9:30 a.m. today in Dubuque, with more prosecution witnesses.

The Telegraph Herald will provide full coverage of the Todd Mullis murder trial in Dubuque.

Find live updates from the courtroom at TelegraphHerald.com and on Twitter at @telegraphherald.

Stories throughout the week also will be available on TelegraphHerald.com and in the daily TH.