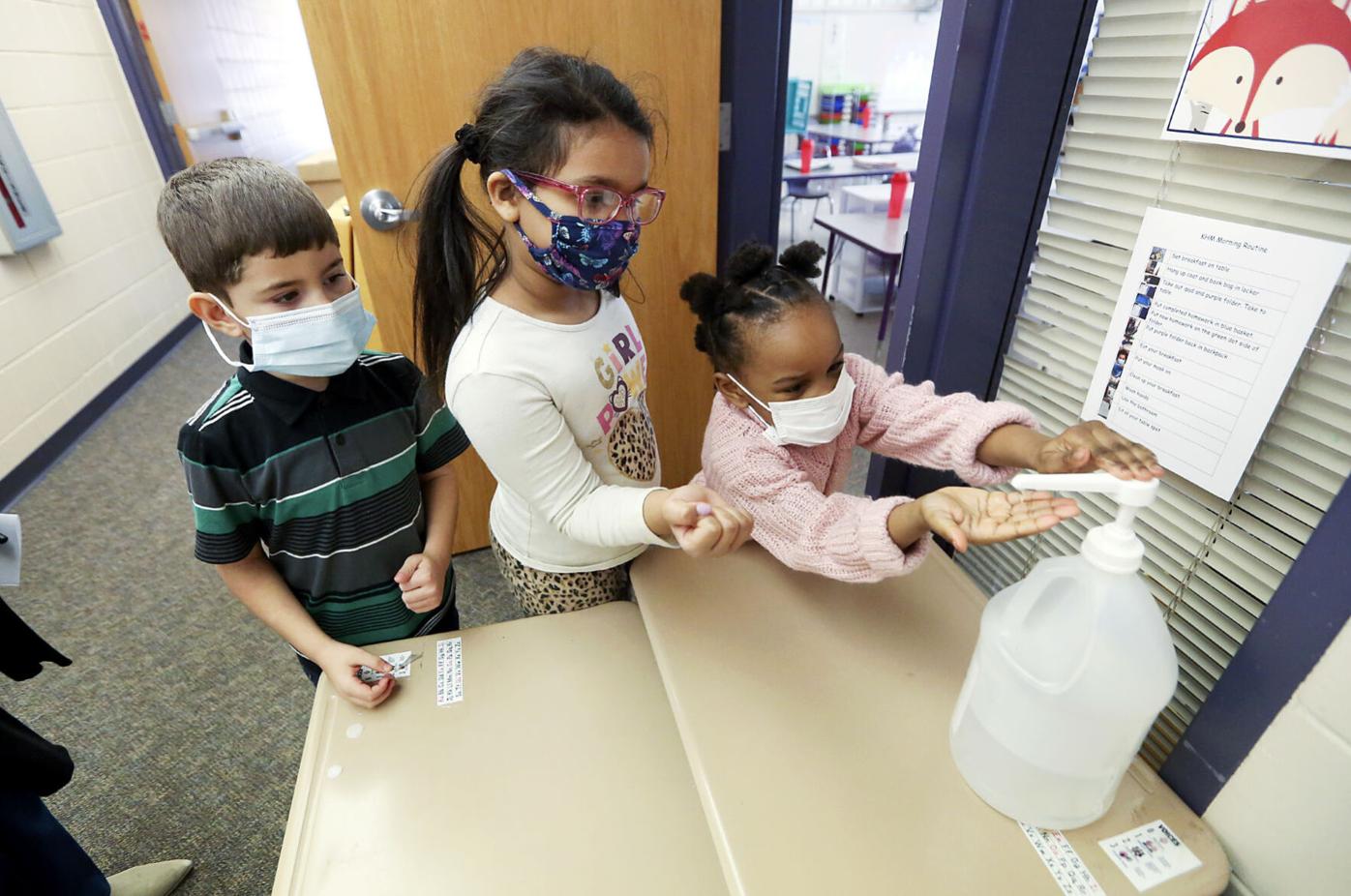 Kindergarten students Adam Arensdorf (form left), Maliyah Stewart and Laionna Eggleston use hand sanitizer on their way back into their classroom on Tuesday at Prescott Elementary School in Dubuque. 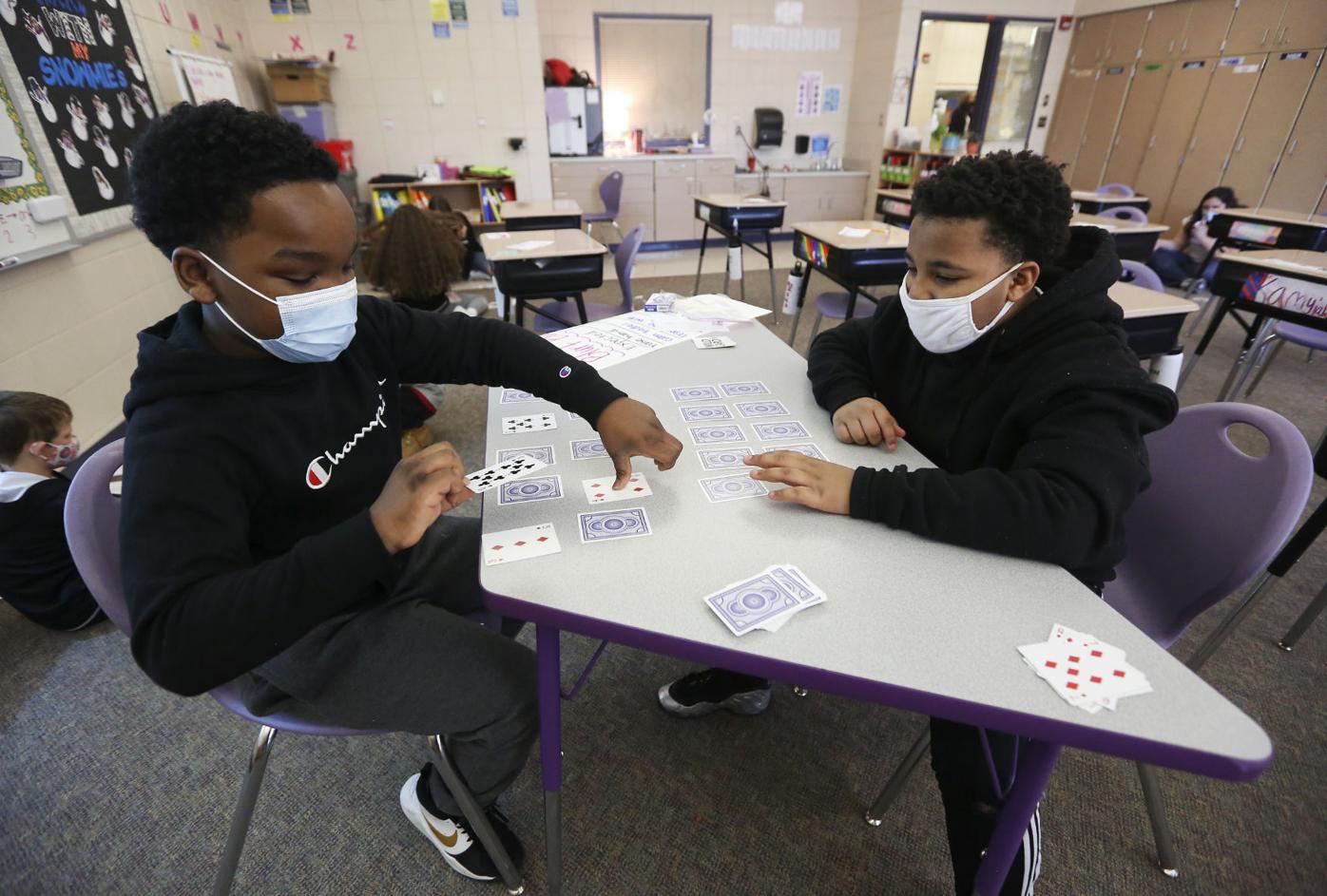 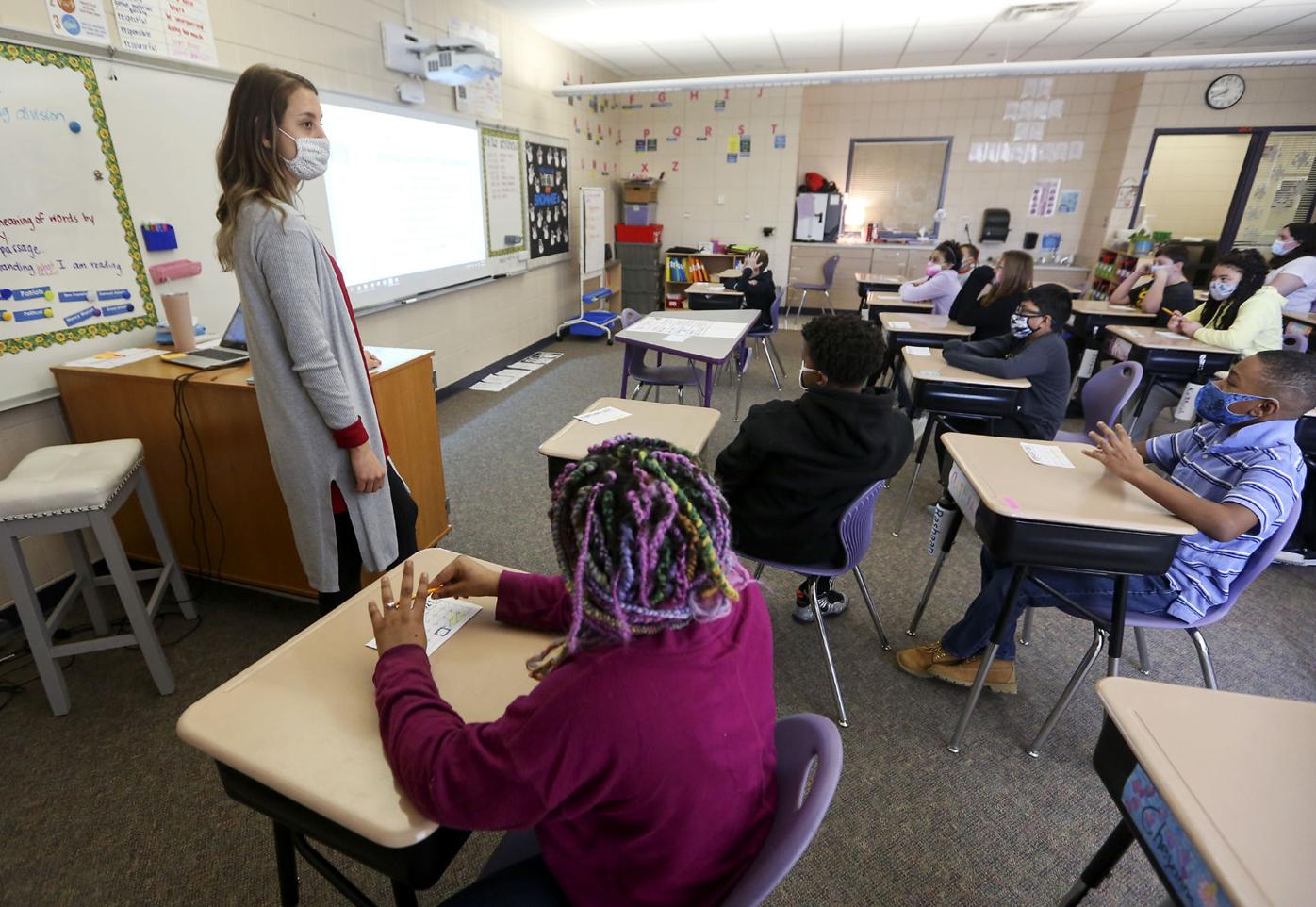 Fifth-grade teacher Jennifer Vaassen emphasized some of the routines that will keep students safe on Tuesday at  Prescott Elementary School in Dubuque.

Kindergarten students Adam Arensdorf (form left), Maliyah Stewart and Laionna Eggleston use hand sanitizer on their way back into their classroom on Tuesday at Prescott Elementary School in Dubuque.

Fifth-grade teacher Jennifer Vaassen emphasized some of the routines that will keep students safe on Tuesday at  Prescott Elementary School in Dubuque.

Jennifer Vaassen showed her students the proper etiquette for playing a game with a partner in a COVID-19 world on Tuesday.

Vaassen, a fifth-grade teacher at Prescott Elementary School in Dubuque, demonstrated with one of her pupils a game in which each played a card and then multiplied the numbers on them.

“We’re going to have our masks on the whole time; we’re going to be somewhat socially distant,” Vaassen told the 19 students in her room.

On Tuesday, Dubuque Community Schools leaders officially made the switch to full-time, in-person learning after spending the year so far in a hybrid schedule due to the COVID-19 pandemic.

Students said having most of their peers back in the building was different from what they have experienced this year, but in a way, it also felt normal.

Students had been alternating in-person and remote attendance days until this week. Officials made the switch to fully in-person learning starting Tuesday in response to a new law requiring them to offer it, though students still can opt to learn fully virtually.

About 83% of students are now learning in-person. District leaders have said the new arrangement means they cannot spread students out as much as they did in the hybrid model, but they still are maximizing space between students and implementing protocols such as mask wearing.

Superintendent Stan Rheingans said educators have approached the transition with both excitement and seriousness.

“There’s a real excitement, a real feeling of, it feels great to have our kids back, it’s the way it should be, and I think there is a little bit of caution, too, to make sure we’re staying as safe as we possibly can,” he said.

Rheingans said officials will continue to monitor COVID-19 cases among students and staff and to make adjustments to their protocols as necessary. He did see some causes for optimism, though, noting the county’s declining positivity rate and the rollout of vaccines to staff last week and this week.

National health officials also have said there is growing evidence that transmission is relatively low in schools when they implement measures such as mask-wearing and social distancing.

“I feel as confident as I’m going to feel,” Rheingans said. “Now, it’s just a matter of the time and the data bearing out that confidence.”

At Prescott, the primary adjustment for students and staff is the increased number of people in the building and diminished social distancing, Principal Vicki Sullivan said. In addition to spreading students out to the extent possible in classrooms, staff also are using the cafeteria as a space for indoor mask breaks and using common spaces such as hallways for small-group instruction.

“I feel confident with the plan we have in place,” she said.

For her first day with students learning in-person full time, Vaassen put an emphasis on helping students establish a routine that will carry them through the school year.

She and her students talked through expected and unexpected school behaviors and then played the multiplication card game. The game, though, was less about teaching content and more about establishing how to play with classmates during a pandemic by taking steps such as wearing masks and not touching each other’s materials.

“Taking the time to (establish routine) now is super important so that they’re prepared for the rest of the year,” Vaassen said.

Fifth-grader Tivon Robinson said that while he preferred going to school every other day, going back to daily, in-person attendance felt normal.

“It feels like how normal school is without all the masks and stuff,” he said.

Fifth-grader Cheyanne Hernandez said she is getting used to having less space but thinks she will grow accustomed to it with time.

She said her school feels “more happy” with most students attending together, noting that her classmates were glad to see one another. She also has a cousin in the class next door, but they previously couldn’t see each other because they attended school on opposite days.

“I get a chance to actually see her, and I got to see my old friends,” Cheyanne said.

VIDEO: Back to in-person learning