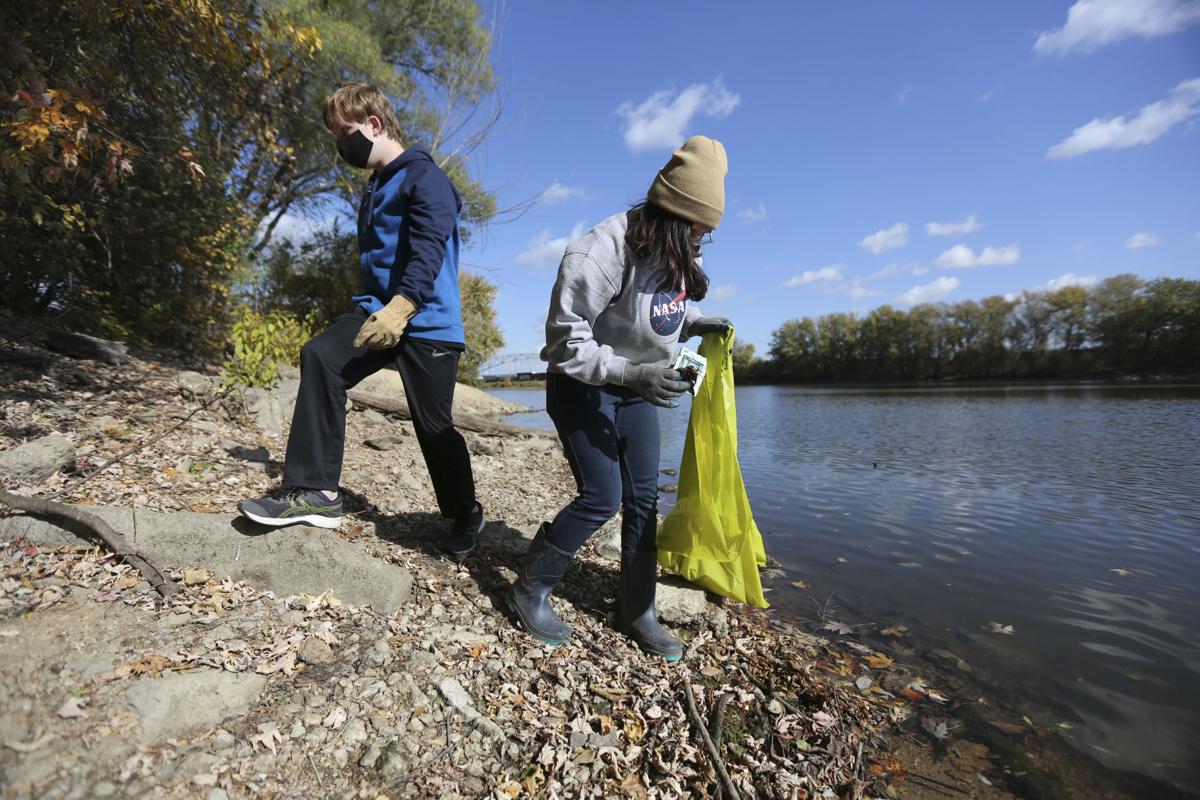 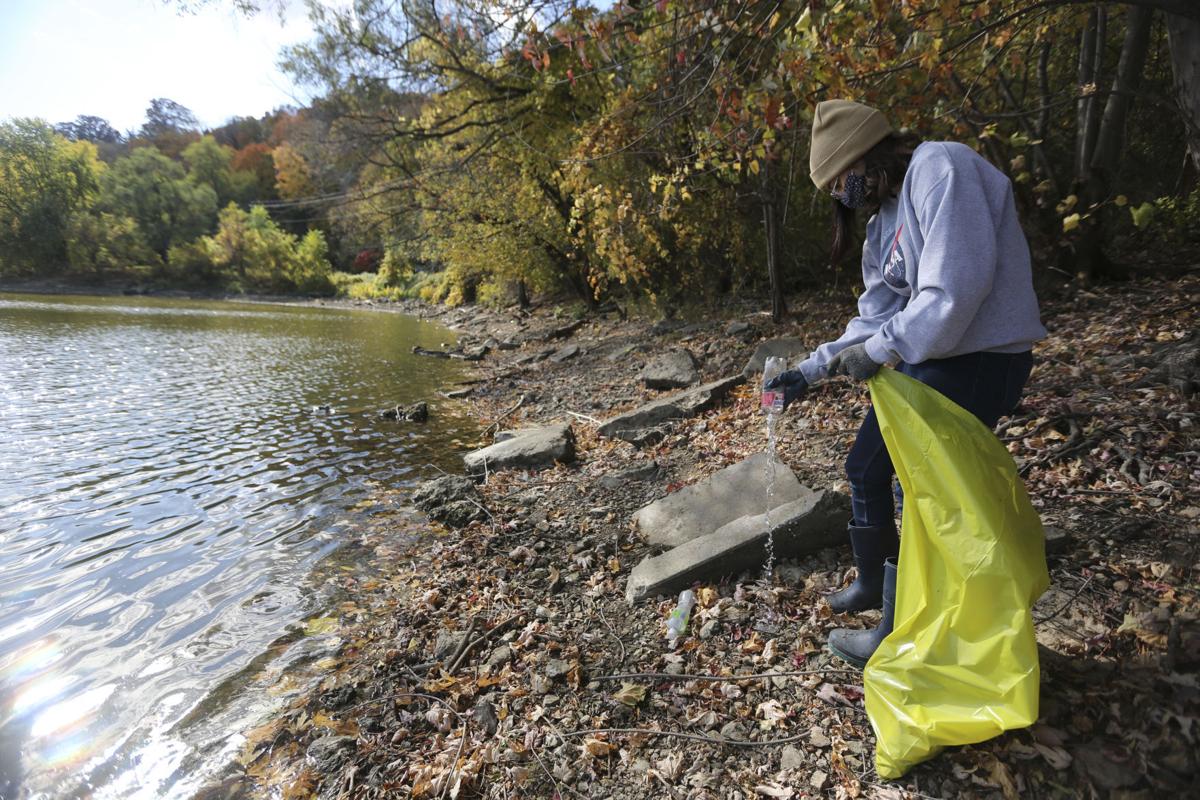 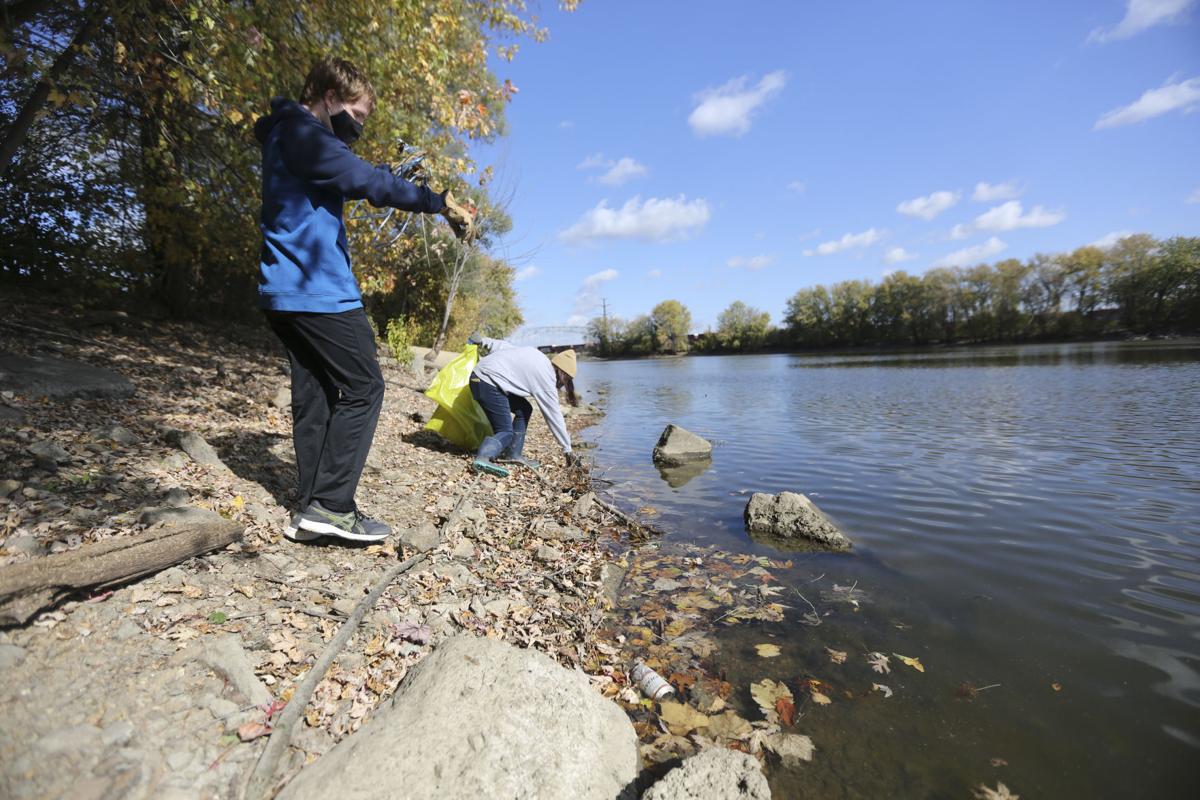 Wahlert Catholic High School students pulled bottles, cans and other refuse from a layer of trash along the detention basin at Maus Park in Dubuque on Friday.

They and other members of the cleanup crew loaded their finds into large, yellow bags to be hauled away. It took about an hour to fill 25 bags, with more work still left to do.

“I found it very upsetting that people would treat the environment like this,” said sophomore Anastasia Jones. “I feel like we’ve picked up a lot of it and made a lot of progress.”

Students in Wahlert’s environmental science class and Leaders of Environmental Action and Protection club spent part of their day cleaning up trash in the park, as well as collecting soil and water samples for a class project.

The cleanup is part of efforts by Wahlert staff to get students out serving the community this year. It also helps drive home the message that science teacher Korrin Schriver tries to teach students about protecting the environment.

“Putting that discussion into action is really important, but I think a lot of times, it doesn’t hit home until you see the issue,” she said.

Wahlert students picked up trash along the detention basin shore and the tree line, then headed to the far end of the basin, where much of the litter had collected. A group of AmeriCorps members joined to help the students clean up, along with a few other volunteers.

“It definitely makes you aware of the environment ... and just how much plastic waste you yourself consume,” said sophomore Leah Park.

Wahlert students participated in the cleanup at the prompting of Bob Felderman, who has been taking regular walks with his father in the park during the COVID-19 pandemic. After noticing the trash in the park, he reached out to the school and connected with Schriver to organize the effort.

“When we first came down here, you couldn’t walk anywhere without stepping on a plastic bottle,” Felderman said on Friday. “It’s just phenomenal what they’ve done.”

Much of the trash that accumulates at Maus Park is washed into the detention basin from city storm drains, said Bev Wagner, education and communication coordinator for Dubuque Metropolitan Area Solid Waste Agency.

That means the litter that people see on the street can wind up in the park, said Wagner, who attended the cleanup.

“Eventually, this is where it ends up,” she said. “People can just kind of blow it off, saying it’s not a big deal, but it is a big deal.”

Wahlert officials have encouraged students to participate in service projects after the school’s Stewardship Day was canceled because of the COVID-19 pandemic, Schriver said. Instead, students are meeting local needs in small groups throughout the year.

Schriver also added an educational element to the cleanup effort by visiting multiple sites with her students during the day to collect soil and water samples for testing.

Her environmental science students will use the results in a class project to look at the connection between ecological health and human activity.

Schriver said seeing all the trash that accumulated in the park was eye-opening for students to see how waste gets there.

“It’s been a really positive student response that they need for change,” she said.

Donald Paar, a junior, said it was annoying to see so much trash in the park. However, he said the area would look much better when it is cleaned up.

“It’s really not that hard to keep that stuff in your pocket or find a garbage can or at least keep it in your car,” he said.

Anastasia said she always is picking up trash and so was drawn to participate in the cleanup. She said such efforts are important to keeping the environment healthy and that the event impacted her.

“I feel like I’m going to be able to do a lot more taking care of the environment than I do now,” she said.

Our opinion: New business boom showcases all Dyersville has to offer

It’s exciting to see new and expanding businesses, but when it happens in a local small community, in the midst of a pandemic, and comes in th…