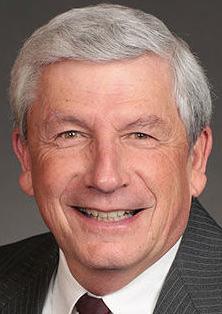 The Dubuque Area Chamber of Commerce hosted a luncheon panel of Iowa lawmakers Wednesday, an annual event that occurs before the start of the state’s legislative session in Des Moines.

The theme at the event, held at Hotel Julien Dubuque, 200 Main St., was making Iowa more attractive to workers and businesses.

“We must all be in the recruiting business,” MidWestOne Bank’s Brock Renbarger, a member of the chamber’s Business Advocacy Council, said prior to the luncheon.

Chamber members said they want lawmakers to focus on not only keeping the young professionals native to Dubuque from moving away, but bringing new professionals in as well.

That was an easy sell for the bipartisan panel of lawmakers, who to a member supported bolstering quality-of-life and child care programs to support that goal.

“One of our big goals is to attract and keep our young people in Iowa,” said Rep. Andy McKean, D-Anamosa. “Moving away from chasing smokestacks and paying more attention to quality-of-life issues young people are looking for — top-notch education, clean environment, recreational opportunities, thriving downtowns and good mental health facilities.”

Chamber leaders also — for the second year in a row — prioritized improving Iowa’s “climate for business growth.” Part of that, leaders said, would involve lowering the state’s corporate tax rate.

“Iowa’s future top corporate rate of 9.8% is lower than only Pennsylvania and New Jersey,” said Rob Reinert, government chairman of the chamber’s executive committee. “This high advertised rate results in Iowa having the inability to compete for some potential economic investments.”

Lawmakers from both sides of the aisle, though, said that rate is not a realistic look at corporate responsibilities in Iowa.

“The Iowa Economic Development Authority, when they promote Iowa to the business community, they say Iowa is the second-lowest cost to business in the entire country,” said Iowa Sen. Pam Jochum, D-Dubuque. “The numbers being thrown out do not paint the whole picture. Iowa is one of four states in the entire country that allows a corporation to deduct 50% of their federal taxes from their state taxes.”

She said that and other incentives drop corporations’ costs dramatically lower than what the 9.8% the corporate income tax rate will reach in 2021. That’s due to a federal 2018 tax reform law.

“The top manufacturing companies in this state pay zero corporate taxes,” Jochum said. “We are writing some of them checks of up to $17 million a year. We are paying them to be here even though we’re educating their children and building their transportation systems. That is something to consider.”

Iowa Rep. Shannon Lundgren, R-Peosta, also said chamber of commerce officials might “be careful what they wish for” before picking at the corporate rates.

“The result of a broken tax system is tax credits,” she told the crowd. “We all want to keep our tax credits. But if we start to mess with our formula, we start to lose things. We need to be careful before we just cut corporate tax.”

Chamber President and CEO Molly Grover said after the event that her members cannot be sure how much damage the rate itself is doing. She said employers might have a “checklist” of things — such as corporate tax rate — to consider when scouting potential locations.

Jochum and Iowa Rep. Chuck Isenhart, D-Dubuque, noted that Iowa’s minimum wage — the federal minimum of $7.25 per hour — is lower than most states in the nation.

They supported raising the wage, depending on how that is achieved.

“What is the magic number? I am less interested in that,” Isenhart said. “It’s more important to me that we index it to some number like inflation. The impact on business could be moderated that way because you could plan for it.”

Lundgren, though, said she did not know how much impact raising the minimum wage would have.

“Who’s making minimum wage? Who’s paying?” she asked. “I haven’t had anyone tell me they are.”

When Iowa Rep. Lindsay James, D-Dubuque, got the microphone, she told Lundgren she would compile a list.

“I am meeting families working two to three jobs just to get by,” she said. “And we subsidize low-wage employers because people who can’t afford health care end up on government assistance.”

The panel formed a united front on protecting other programs prioritized by the chamber, including state historic tax credits and tax increment financing.

“There’s not a person at this table who doesn’t know how these have helped here,” Lundgren said. “You certainly have my word that I will stand up and defend the usefulness and benefits those have had in Dubuque County.”