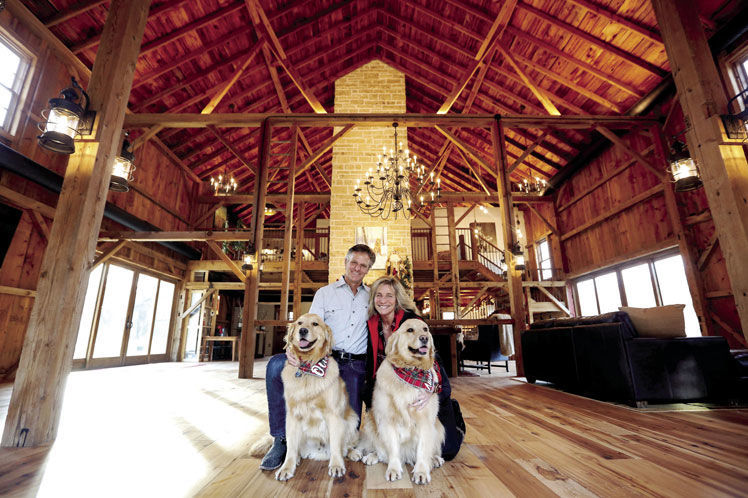 Steve and Kristin Vaassen, seen here with their dogs Otis and Annabelle, hope to turn their barn at 2319 Manson Road in Dubuque into an event venue.

City of Dubuque officials on Thursday voted against a zoning change that would have paved the way for a new event venue along Manson Road.

By a 4-0 vote, Dubuque Zoning Advisory Commission members recommended against rezoning the property from single-family residential to commercial use.

The request will now be considered by the Dubuque City Council. Because zoning commission members opposed the change, a supermajority of council members would have to support the request.

Kristin and Steve Vaassen, who reside on Manson Road, had made the rezoning request in hopes of turning a historic, century-old barn on their property into a space that could house corporate events, weddings and other gatherings.

Commission members complimented the concept but said they could not support it in that particular location.

“It’s a good project,” said Commission Member Steve Baumhover. “But located in this area, I feel it would be inappropriate.”

More than 50 people attended the hearing, and many took to the podium to express their opposition.

Peter Arling, who lives near the Vaassens’ property, was the first to speak out against the rezoning request. He also is an attorney with O’Connor & Thomas, P.C., in Dubuque.

He submitted a petition opposing the zoning change that was signed by more than 75 residents who live near the Vaassen’s property. Arling argued that the sheer number of people on the petition is strong evidence that there is significant opposition.

“(All of these people) thought it was important to sign on and say no,” Arling said.

He noted that the barn is surrounded by properties zoned for residential use and argued that rezoning it for commercial use would amount to “spot zoning.”

He also expressed concerns about the volume of traffic coming and going from the property. Arling said guests often come and go from events like weddings at the same time, meaning that the venue could lead to periods of heavy traffic on small, narrow roadways that weren’t designed for it.

“This ramped-up use will significantly change the neighborhood,” he said.

Larry Vogt, who resides on nearby Creek Wood Drive, said he and his wife also have traffic concerns.

Janet Faley said she lives about 300 feet from the barn. She was among several residents who expressed concerns about potential noise from the venue.

She noted that she routinely heard noises from the property when the barn was under construction. Faley tolerated it because she figured it was a temporary inconvenience, she said. The prospect of frequent events and live music being played within the venue, however, is too much for her to stomach.

“This would create continual noise,” she said.

Kristin and Steve Vaassen each provided comments at the beginning and end of the public hearing.

They described how they purchased the deconstructed barn from Tipton, Iowa, and put it back together piece by piece.

They said they originally intended for the refurbished barn to be used for things like storage and woodworking. However, as the barn came together, they came to another conclusion.

Kristin Vaassen, meanwhile, argued that turning the barn into a venue for weddings and other gatherings would boost tourism and bring more business to area restaurants and hotels.

She directly addressed many of the residents’ concerns, stating that insulation within the barn and trees surrounding the structure would reduce the spread of noise. She also said other facilities — like restaurants and a nearby church — already generate traffic on some nearby roads.

A Dubuque couple hopes to turn a historic, century-old barn on their residential acreage int…