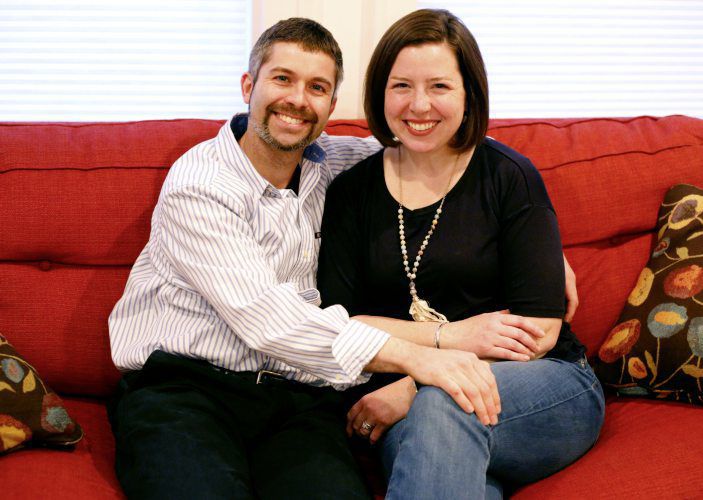 Jeff and Liz Buschman met on a blind date in 2008. They have been married for more than seven years and have two sons. 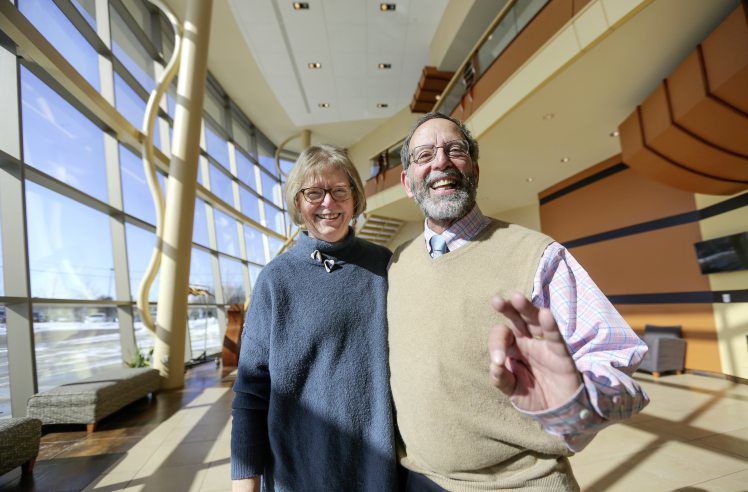 Phyllis and Alan Garfield have been married for 40 years, and both work at the University of Dubuque. They met in Omaha, Neb., when Alan invited Phyllis to dinner, and he surprises her with a different gift every Valentine’s Day.

Jeff and Liz Buschman met on a blind date in 2008. They have been married for more than seven years and have two sons.

Phyllis and Alan Garfield have been married for 40 years, and both work at the University of Dubuque. They met in Omaha, Neb., when Alan invited Phyllis to dinner, and he surprises her with a different gift every Valentine’s Day.

No two love stories are the same.

In honor of Valentine’s Day, the Telegraph Herald spoke with two local couples about dating, marriage and the ways in which love endures and evolves.

ETCHED IN THEIR HEARTS

Several years back, Alan Garfield took his college students to Dublin, Ireland, to tour art galleries in the city and take in the countryside.

Alan’s wife, Phyllis, tagged along to spend time with him and learn more about the country.

After a long day at the National Gallery of Ireland, Alan decided it was time to inject some romance. In a professorial way.

It was Valentine’s Day, after all.

Alan, Phyllis and the students walked down Aungier Street and entered into the Whitefriar Street Carmelite Church. He pointed to a nearby display.

“See over there,” he recalled saying at the time. “Those are the bones of St. Valentine.”

“That’s the pleasure in it — you don’t even think about it,” Alan said.

Although that Valentine’s Day was a little darker than their usual holiday together, every year Alan tries to think of a witty way to surprise Phyllis.

Alan, 70, and Phyllis, 69, have been married for 40 years, and both work at the University of Dubuque. Alan teaches digital art and design and Phyllis is director of international student services and study abroad.

The two met when Alan was an undergraduate teacher at Creighton University in Omaha, Neb., and Phyllis was finishing graduate school.

“I remember I said something rather awkward upon meeting her, something like, ‘If you’re not already married, would you like to come to my apartment for dinner and to look at my etchings?’” Alan said.

Well, as an art historian, he really did have etchings. And to his surprise, Phyllis actually came over.

For dinner, he used a small charcoal grill to warm up a can of beans and kosher hot dogs.

After 40 years of marriage, Alan said what he loves about their relationship is the long, engaging conversations they have. Just like the first night on the roof in Omaha, they still sit up for hours talking.

The other week, the two left a play early and went home to talk. Alan said they poured a few drinks and spent hours catching up.

“We talked from about 8 until about 11:30 p.m. about elections and some of the stuff she was reading,” he said. “We just talked.”

“It’s a great idea — this TSA precheck thing,” he said. “OK, it’s corny, but I thought she would like it because I would like it.”

Liz and Jeff Bushman also started their journey together with an unusual pairing.

Liz, a Chicago native who studied education at Clarke University, was student teaching at Thomas Jefferson Middle School in 2008. One of her new colleagues set her up on a blind date about one week later.

“I was sick at home, and my phone rang,” Liz recalled. “(Jeff) was like, ‘Hi, I got your number from (her colleague) and wanted to know if you wanted to go out sleigh riding.”

There was just one problem.

“I didn’t know what sleigh riding was because in Chicago we call it sledding,” she laughed.

That Friday, she sat down at a local bar and waited for Jeff.

“I told him I would have on a white coat,” Liz said. “I think we both got a Blue Moon (beer). It was good. I was just planning on being out for an hour, but we stayed out for three hours. We really bonded over (the show) ‘Arrested Development.’”

Although she initially intended to move back home, her relationship with Jeff developed and she started working at Eisenhower Elementary School. She ended up staying in Dubuque.

During their first Valentine’s Day together, Liz went over to the apartment Jeff was sharing with his brother at the time. He made her boxed spaghetti and shrimp cocktails, and they enjoyed candy peanut butter cups for dessert.

“I ate it,” Liz laughed. “It was good. I just thought it was so sweet that someone made dinner for me.”

Jeff, 35, and Liz, 33, have been married for more than seven years now and have two sons.

VIDEO: This is how we met