A Transportation Security Administration agent screens a passenger at Dubuque Regional Airport in Dubuque on Wednesday. Passenger counts at the facility dropped 2% from 2018 to 2019. 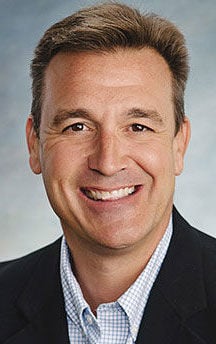 Passenger counts for commercial flights at Dubuque Regional Airport fell for the second year in a row in 2019.

The 2% drop in enplanements comes at a time when airport and business officials are attempting to lure another carrier to the market. But local officials said the drop largely can be attributed to factors beyond their control.

A brutal winter in early 2019 caused increased weather-related cancellations across the Midwest. And the global grounding of Boeing’s 737 Max jets after a pair of deadly crashes had a ripple effect across the entire industry, forcing airlines to adjust fleets and schedules to make up for out-of-service planes and delayed orders for new planes. That required air carriers to shuffle aircraft — including regional jets serving smaller- and medium-sized markets such as Dubuque — to larger routes.

“So instead of a 50-seat aircraft flying out of Dubuque, you might see a 44-seater,” said Todd Dalsing, the airport’s new director. “So you’re losing six seats or so per flight.”

About 760 fewer passengers boarded commercial flights at the Dubuque airport in 2019 compared to the previous year, according to figures from the facility. The annual total of 36,592 was 2% lower than the 37,351 in 2018, which itself represented a 4.3% decrease from 2017.

The 2019 decrease can be tied to January and February. Eleven more flights were canceled during those two months in 2019 than in 2018.

If not for the increased weather cancellations, the airport would have broken even with 2018 in terms of passenger counts, based on an average of flights out of Dubuque being 70% full.

“We just got hammered (with bad weather),” Dalsing said. “And it wasn’t just snow where you can plow it to the side and blow it off into the infield. It was severe cold and ice. Ice was a big factor last year.”

Passenger counts had ticked up at the airport from 2013 to 2017 after hitting a 20-year low of about 32,000 people boarding commercial and charter flights from Dubuque.

But those totals have fallen the past two years. The about 37,900 passengers on commercial and charter flights last year is about 35% less than in 2000, when more than 58,000 passengers boarded flights out of Dubuque.

The consolidation of the airline industry continues to limit the number of air carriers, while regional competition for air travelers has become increasingly fierce, airport officials have said.

About 77% of all potential airline passengers within a 50- to 70-mile radius of the Dubuque airport choose to fly from other airports, including from Chicago; Cedar Rapids and Des Moines, Iowa; Moline, Ill.; and Madison, Wis., according to an airport consultant.

“Airline service at DBQ lacks options that many travelers want, such as multiple airline options (including low-cost carriers), varied direct/nonstop destinations and more frequent daily departures,” according to the consultant’s latest report.

Dubuque officials still await word on whether they will land a $775,000 federal grant to help court United Airlines to establish two round-trip flights per day to Denver.

Airport partners, including the City of Dubuque and Dubuque County, have committed a similar amount to supplement the grant. In all, airport officials hope to offer a total of $1.3 million as a “minimum revenue guarantee.”

“I would say we’re still a good, viable market for added service,” he said. “Obviously, when we go and talk to the airlines, we talk about enplanements and load factors and if they’re making money on those routes. We believe as long as we stay in that 70th percentile for load factors (or average seats filled on flights), that’s good and shows (Dubuque) is still a good market.”

He plans to meet with representatives from American and United in March to discuss opportunities to expand air service in Dubuque.

The airport and Dubuque Area Chamber of Commerce also recently launched a ”True Cost of Travel” calculator on their websites to counter assumptions that service out of Dubuque is more costly.

“We feel really confident that we’re really well-positioned to grow our air service,” chamber President Molly Grover said. “We’re filling planes. We’re seeing wonderful new customers starting to come. ... We’re bringing people to the airport who have never been to the airport. We want to continue to grow our market, and there’s so much opportunity to do that here. The fact we’re really flat, rather than down, to us is encouraging.”