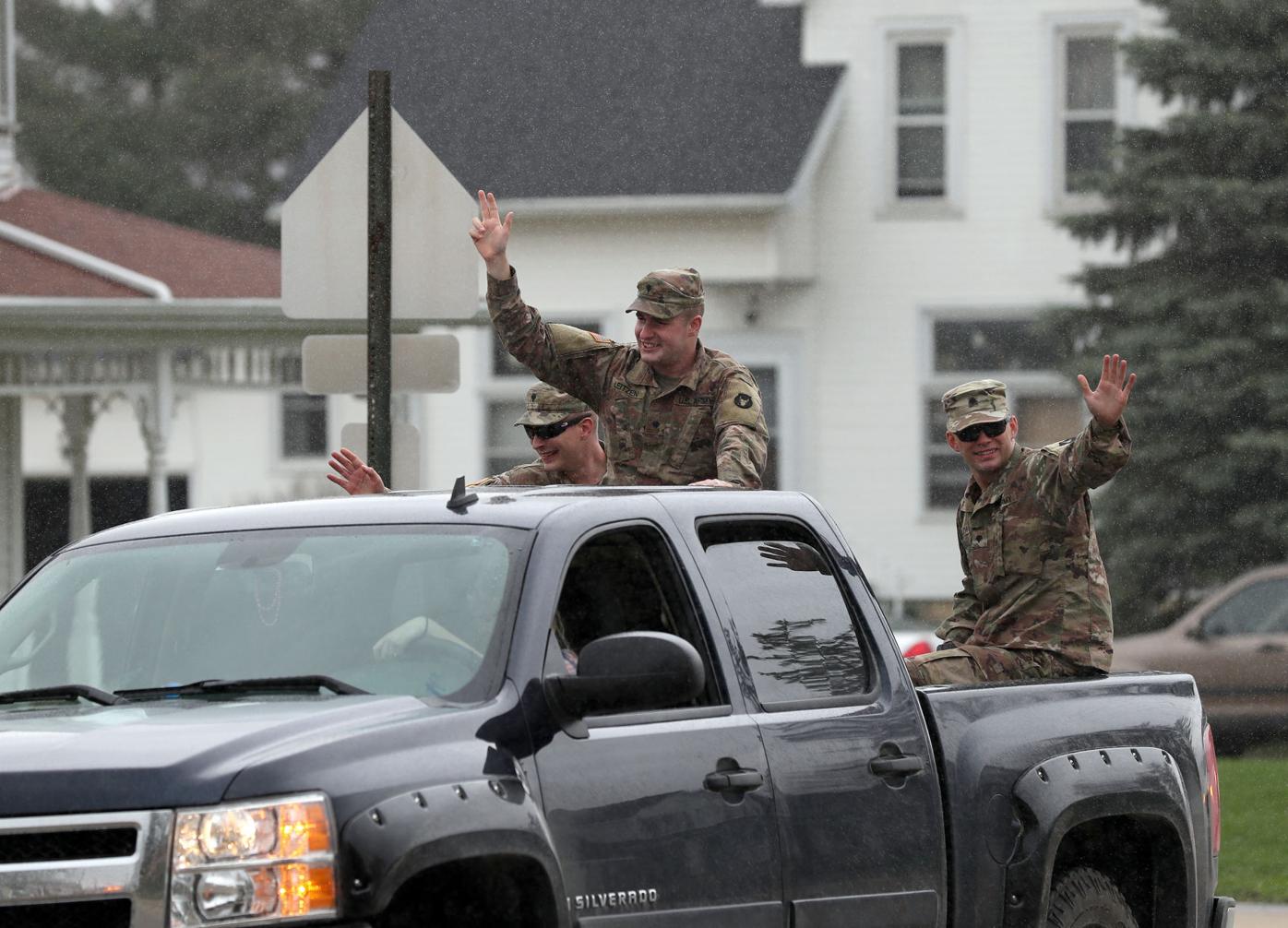 Three soldiers wave to Cascade, Iowa, residents on Friday during an impromptu parade led by the Cascade Fire Department to welcome home five city residents who had served overseas in a National Guard unit. 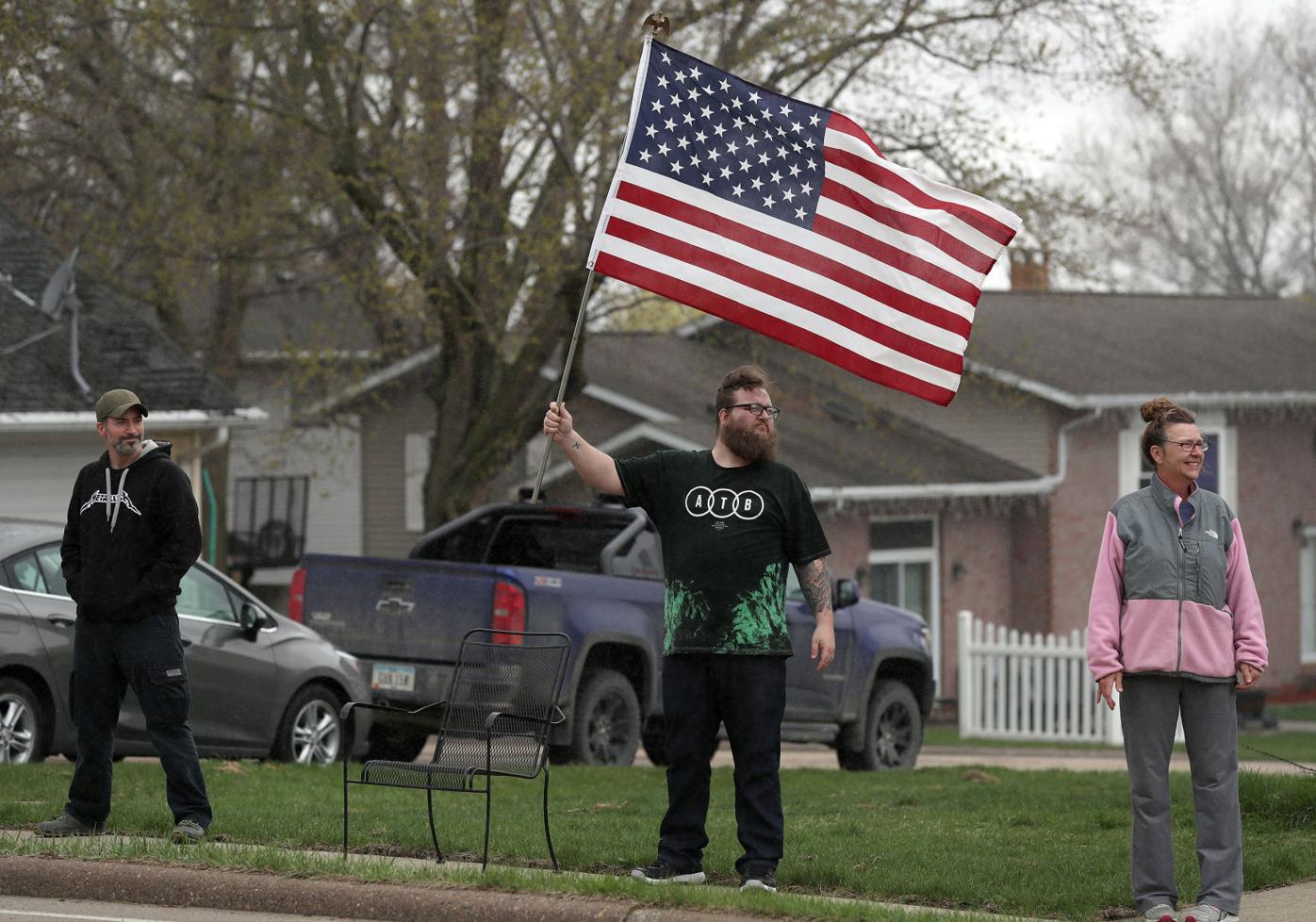 Residents line the street during the impromptu parade. 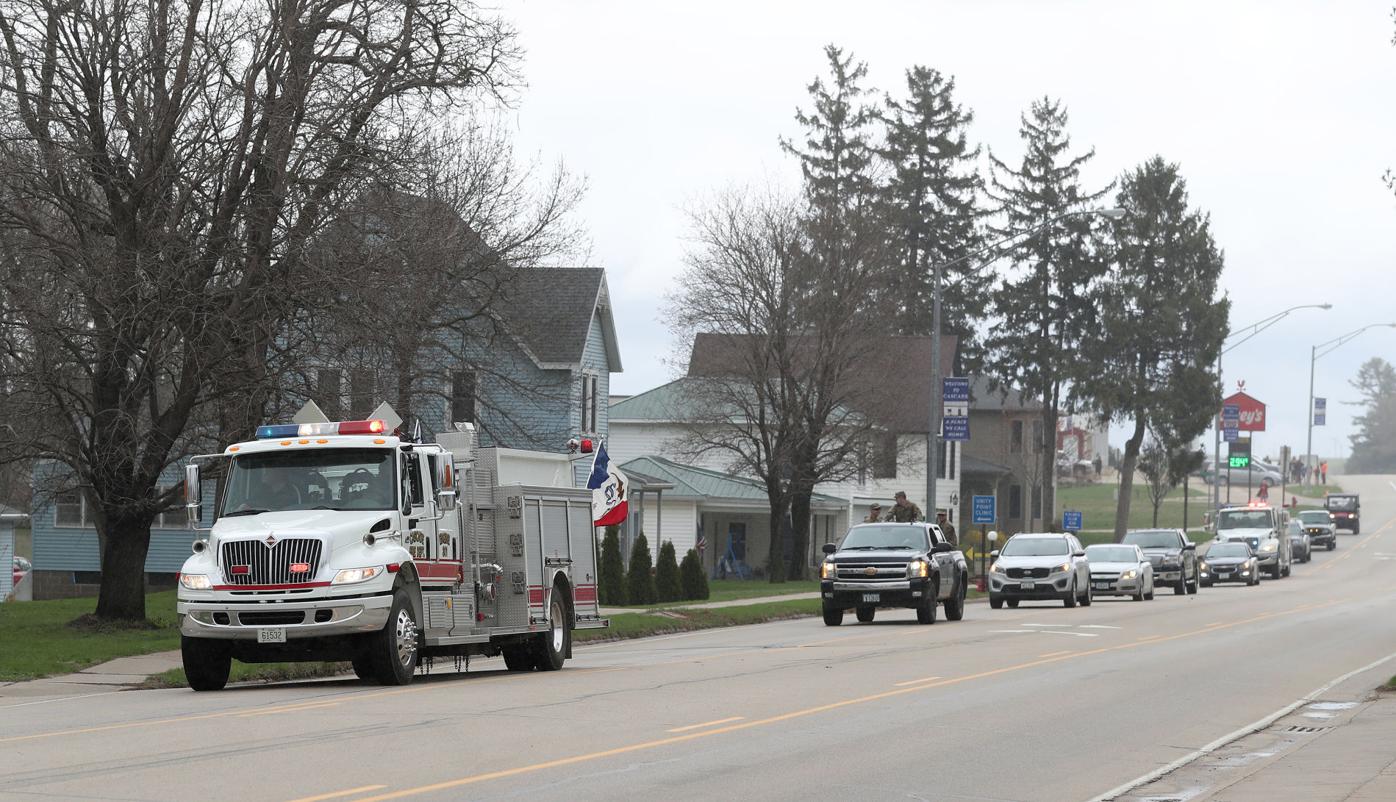 The impromptu parade was led by the Cascade Fire Department.

Three soldiers wave to Cascade, Iowa, residents on Friday during an impromptu parade led by the Cascade Fire Department to welcome home five city residents who had served overseas in a National Guard unit.

Residents line the street during the impromptu parade.

The impromptu parade was led by the Cascade Fire Department.

CASCADE, Iowa — People gathered in front yards and lined storefronts Friday in downtown Cascade. They held their American flags at the ready.

As the ambulance sounded its alert, they raised their flags high and, with their free hand, waved eagerly.

It was their way of saying thanks to the soldiers who passed by and returned their gestures with a smile.

The Cascade Fire Department led a parade to welcome home Bryan Baldwin, Patrick Leitzen, Alex Knepper, Jake Recker and Mitchel Recker. They returned to Cascade after being deployed in Qatar for about 11 months with the Iowa Army National Guard’s Company D of the 1st Battalion, 133rd Infantry Regiment.

So, when the firefighters found out there would not be a public homecoming ceremony due to COVID-19 concerns when the soldiers touched down at Quad Cities International Airport on Friday, he knew they needed to do something to honor the soldiers as well.

“I am a veteran,” he said. “We have a couple of guys in the Fire Department that are veterans. It’s important for us to recognize these individuals and the families and the sacrifices they (make). I remember when I was coming, you just felt good coming back.”

Firefighter Nic Kremer said he has had a lot of conversations with his nephew Jake Recker via Snapchat during the 11 months he has been overseas.

Kremer was happy the Fire Department was able to do something to recognize the soldiers for everything they do and have done for the country.

“I think it’s important because these guys went and trained and put their lives on the line to serve for our country,” he said. “I think we need to appreciate that and have that celebration.”

After returning home to Cascade, Bryan Baldwin told the Telegraph Herald that he looks forward to eating at U.S. restaurants again, specifically HuHot Mongolian Grill, where he said he would be having dinner Friday night.

“Especially seeing the culture and lifestyle over there compared to here really opens your eyes,” he said. “We got to leave base a handful of times so just going through Qatar and seeing the different lifestyles is just a huge 180.”

Leitzen’s daughter was born May 6 — just before he was deployed. He said being able to hold her again was incredible.

Knepper said his time overseas made him take a step back and reflect on the little things in life for which he is grateful.

“It’s amazing how small things make you happy now, like being able to see green grass and the clear, blue skies,” he said.

Although soldiers have had many video calls, it wasn’t the same as finally embracing his family again, Mitchel Recker said.

Recker said, now that he is home, he looks forward to taking vacations with friends and family. He also cannot wait to catch up with his 3-year-old nephew, Briggs.

“He has grown up a lot in the last year,” he said.

It’s been a hard year, said Alyssa Miura, who is engaged to Knepper. Shortly before his deployment, they lost their son minutes after he was born.

“I went through his first birthday by myself, but what’s even more precious is that (Knepper) had his brothers surrounding him during such a hard thing,” she said.

When she picked Knepper up from the airport Friday and put her arms around him for the first time in about 11 months, it wasn’t just Knepper who was home again. She was home, too.

“He is my person,” she said. “It sounds cliche, but he is my best friend, worst enemy and the love of my life all wrapped up into one person.”

Our opinion: A salute and welcome home to brave soldiers of 133rd

A salute to the members of the Iowa National Guard’s “Ironman” 1st Battalion, 133rd Infantry Regiment, who returned home this week, with Compa…