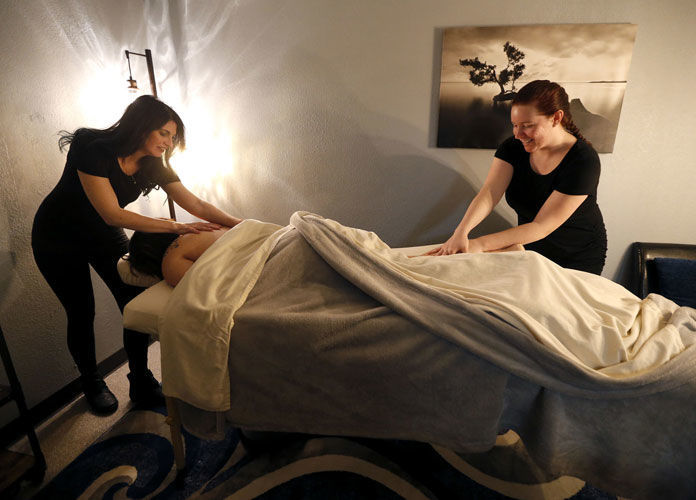 The owners of EVolve Day Spa, Lindsey Einsweiler (left) and Chelsea Vollmer, work with a client on Friday at the business in Dubuque. 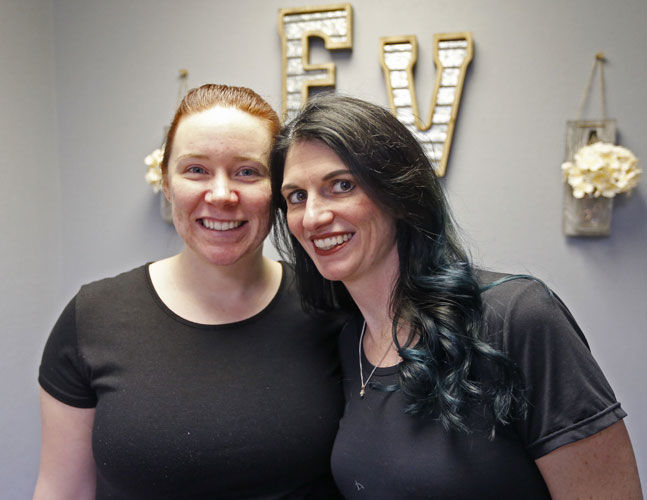 The wwners of EVolve Day Spa in Dubuque are Chelsea Vollmer (left) and Lindsey Einsweiler.

The owners of EVolve Day Spa, Lindsey Einsweiler (left) and Chelsea Vollmer, work with a client on Friday at the business in Dubuque.

The wwners of EVolve Day Spa in Dubuque are Chelsea Vollmer (left) and Lindsey Einsweiler.

Biz Buzz shares business tidbits from around the tri-state area. This week, we highlight developments in Dubuque and Dyersville, Iowa.

Local residents Chelsea Vollmer and Lindsey Einsweiler first developed a friendship when they were students. Now, they are translating their rapport into a bustling spa business.

The duo opened EVolve Day Spa at 3430 Dodge St., Suite 2., in Dubuque in June. Just seven months later, they are considering an expansion.

The seeds for the growing business were first sown at Inspirit Institute in Dubuque, where Vollmer and Einsweiler each attended massage school.

The pair immediately hit it off.

“We developed a bond, and I think we realized pretty quickly that we shared a lot of the same interests and views,” recalled Vollmer.

They stayed in close contact after they completed school and entered the working world. Eventually, their thoughts turned to opening a business together.

They unveiled EVolve Day Spa last summer in Inn Plaza along Dodge Street. The first two letters of the

business name reflect the initials of the two owners’ surnames.

Everything is done with the customer experience in mind.

“When you are getting a service such as a massage, that can be uncomfortable for many people,” said Einsweiler. “We strive to create an atmosphere that is warm, welcoming and relaxed.”

The customer feedback has been so positive that the two owners are eyeing growth. Einsweiler said they hope to add new services and treatment rooms in the near future.

EVolve Day Spa is open by appointment Monday through Saturday. The business can be reached at 563-258-9200.

When Dubuque resident Stephen Broxton was a child, he used to watch his father with a sense of awe.

Broxton fondly remembers how his dad was “a jack of all trades” capable of tackling any task, whether it meant completing a job or simply doing a favor for someone.

“There was nothing he couldn’t do or wouldn’t do,” Broxton said. “That is just the type of guy he was.”

In late 2019, Broxton launched a local delivery and transport business. In honor of his role model, he named the enterprise Following My Father.

Broxton was born and raised in Chicago, and he moved to Dubuque in 2013.

His career received a shot in the arm in 2017, when he landed a job with a logistics and trucking firm. The position introduced him to the industry and allowed him to save up some cash.

Around Christmas 2018, Broxton decided to bid farewell to his strenuous job and pursue his own business.

“I figured, ‘Why work for someone else when I can make this (business) my own?” he said.

He used his savings to purchase a box truck and enrolled in Iowa Venture School, a training program that aids startup companies. Broxton finished Venture School in November and started booking his first jobs the following month.

Broxton has landed jobs shipping janitorial equipment, food products and dry goods. He has added one employee to his team.

A pair of Dyersville, Iowa, residents are joining forces to enhance the local arts community.

On Feb. 13, Ashley Althoff and Heidi Huisman will launch what they believe is the community’s first pop-up art gallery. Located in a vacant space at 248 First Ave. E, the gallery will feature a combination of paintings, graphic art, drawings, 3D art and more.

Althoff and Huisman were inspired to bring the pop-up concept to Dyersville after visiting an art workshop in Dubuque.

“That got us talking about how we can make people more aware of the artists in our community,” Althoff said. “This was our idea — to get a lot of different artists in the area to come together and show their work.”

The pop-up gallery will be open Thursday through Sunday on three consecutive weekends. It is open from 5 to 8 p.m. Thursdays and Fridays and 10 a.m. to 4 p.m. on Saturdays and Sundays.

Althoff said many artists will be present during those hours so they can discuss their work with visitors.

In addition to shedding light on local arts, Althoff believes the pop-up gallery will benefit the local economy.

“It will keep people here on the weekends,” she said. “Instead of leaving town, maybe they’ll spend a day checking out the gallery, or visiting the brewery, or stopping in at another downtown business.”

Althoff said she is still recruiting artists who want to display their work in the gallery. Interested parties can contact her at ashleyalthoff.37@gmail.com.