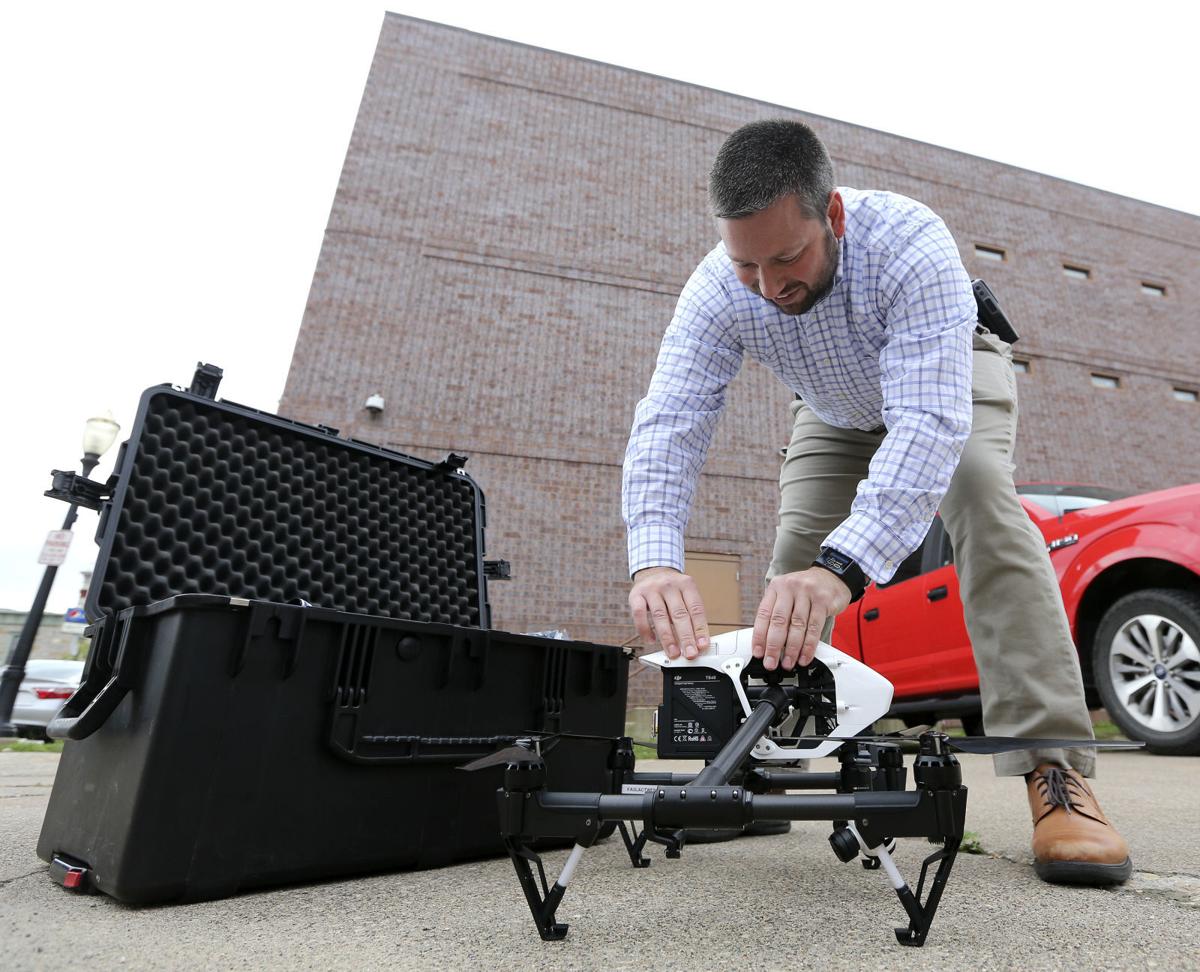 Dubuque Police Cpl. Luke Bock sets up the depart-ment’s drone. Bock said use of the drone is consistent with the law and police “don’t just put it up looking around for crimes that are currently occurring.” 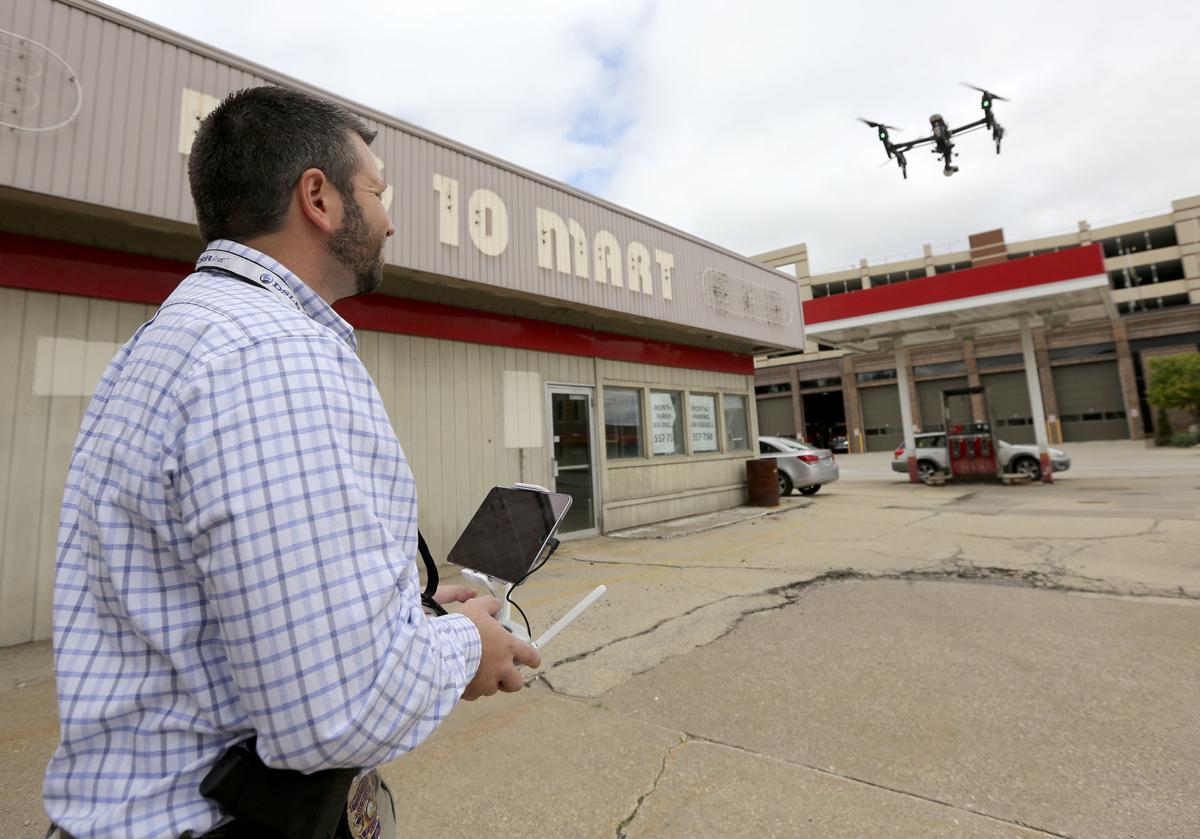 Dubuque Police Cpl. Luke Bock sets up the depart-ment’s drone. Bock said use of the drone is consistent with the law and police “don’t just put it up looking around for crimes that are currently occurring.”

From investigating an industrial fire to assessing hazardous materials spills to searching for fleeing suspects, the City of Dubuque now has more eyes in the sky.

Dubuque has expanded its use of drones over the past two years. Once solely used by the city’s Cable TV Division to capture aerial video and photos of city projects and initiatives to be used in programming, city drones now aid police, firefighters and engineers.

About a dozen city employees were certified two years ago to fly city-owned drones. At least 20 now have completed ground school training to obtain a remote pilot certificate from the Federal Aviation Administration to fly a drone.

The city has spent an estimated $40,000 since 2015 purchasing and outfitting five drones. The city also pays $150 each for city employees to take a proctored test through the FAA to become certified.

The FAA requires those who fly drones for commercial and government uses to pass a certification test every two years.

“We have really started to use the drones as really part of an integral tool (as) part of the work that we do,” Assistant City Engineer Bob Schiesl told City Council members earlier this year.

Since February 2018, department employees have completed nearly 170 “missions” utilizing a drone. They have been used to monitor the progress of city construction projects and inspect bridges, levees, floodwalls and detention basins.

“The level of accuracy that the drone can provide us ... is unbelievable,” Schiesl said.

For example, city staff used the drone to survey a stockpile to determine how much topsoil was available to be used in city projects.

“That would have taken us probably a day or two worth of work for a two-person staff to go out (and survey the stockpile),” Schiesl said. “We went out with the drone and in five minutes ... the software calculated we had 31,000 yards of topsoil in that location.”

Staff also used a drone to provide 3-D modeling and mapping of buildings, intersections and terrain to aid in project planning and design, according to city engineering technician Troy Kress.

City inspectors also plan to use them to aid in building inspections.

In terms of public safety, city drones have aided Dubuque firefighters in responding to hazardous material spills, including when a storage tank leaked about 60,000 gallons of fuel into the South Fork of Catfish Creek in August 2018.

The department flew the length of the creek to the Mississippi River, allowing responders to quickly and easily assess the extent of the spill, said Fire Chief Rick Steines.

Firefighters also deployed the drone in April after an anhydrous ammonia tank started leaking after a crash on Olde Massey Road near Mines of Spain Road. It provided emergency responders with a look at the scene without putting someone in a hazmat suit and sending him or her toward the plume of hazardous gas.

Dubuque firefighters also deployed a drone after a February 2018 blaze gutted Link Hydraulic’s 12,000-square-foot building at 180 Westside Court. Investigators used it to pinpoint hot spots and survey the wreckage to determine the point of origin and possible cause of the fire, Steines said.

The drone is capable of recording and streaming live images using either a high-definition video camera or a heat signature camera.

Dubuque police have the same capabilities and have used their drone to search for fleeing suspects, locate evidence thrown on a rooftop and gather aerial photos and video of crime scenes.

“The eye in the sky is searching a wooded area a lot faster than boots on the ground could,” said Lt. Joe Messerich. “We covered way more ground and saved us a lot of time.”

In Iowa, evidence gathered by a drone is barred in traffic enforcement and inadmissible in court unless authorized by a search warrant or otherwise obtained in “a manner that is consistent with state and federal laws.”

“It’s not something that’s out on the street at any given time,” said drone pilot and Police Department Cpl. Luke Bock, who is assigned to investigations. “We don’t just put it up looking around for crimes that are currently occurring. ... It’s the same as any other surveillance the department uses. (A person’s) right to privacy in their own home won’t be compromised by the drone.”

* Must weigh less than 55 pounds

* Must remain in visual line of sight of operator

* Must fly only in daylight

* Must not exceed airspeed of 100 mph

* Must not exceed altitude of 400 feet above the ground, but may fly higher if the drone remains within 400 feet of a structure.

* Must not be flown over people

* Must pass an aeronautical knowledge test

* Must pass a certification test every two years

* Must obtain an operator certificate

* Must be vetted by the Transportation Security Administration

* Must register each drone they intend to operate