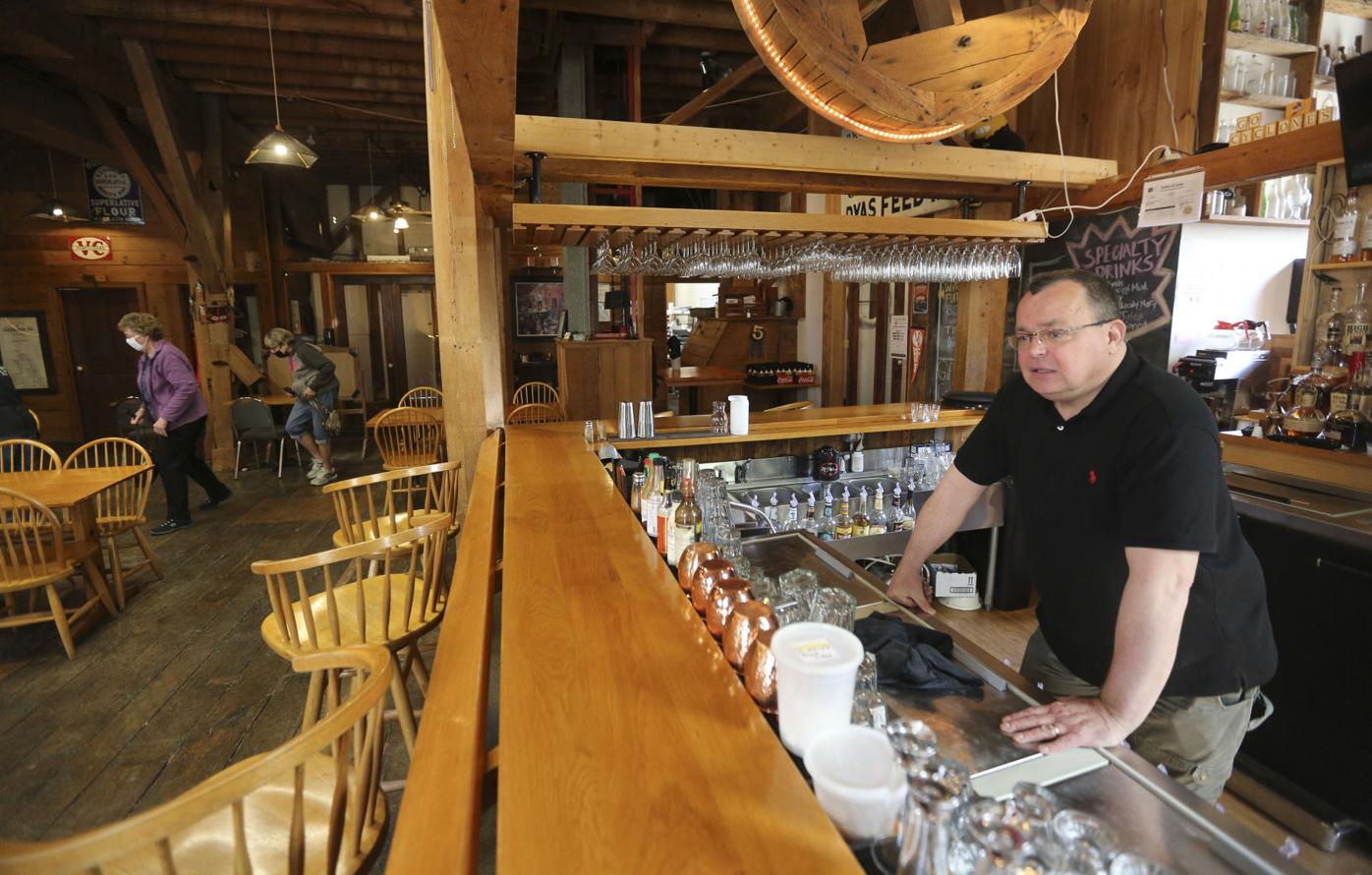 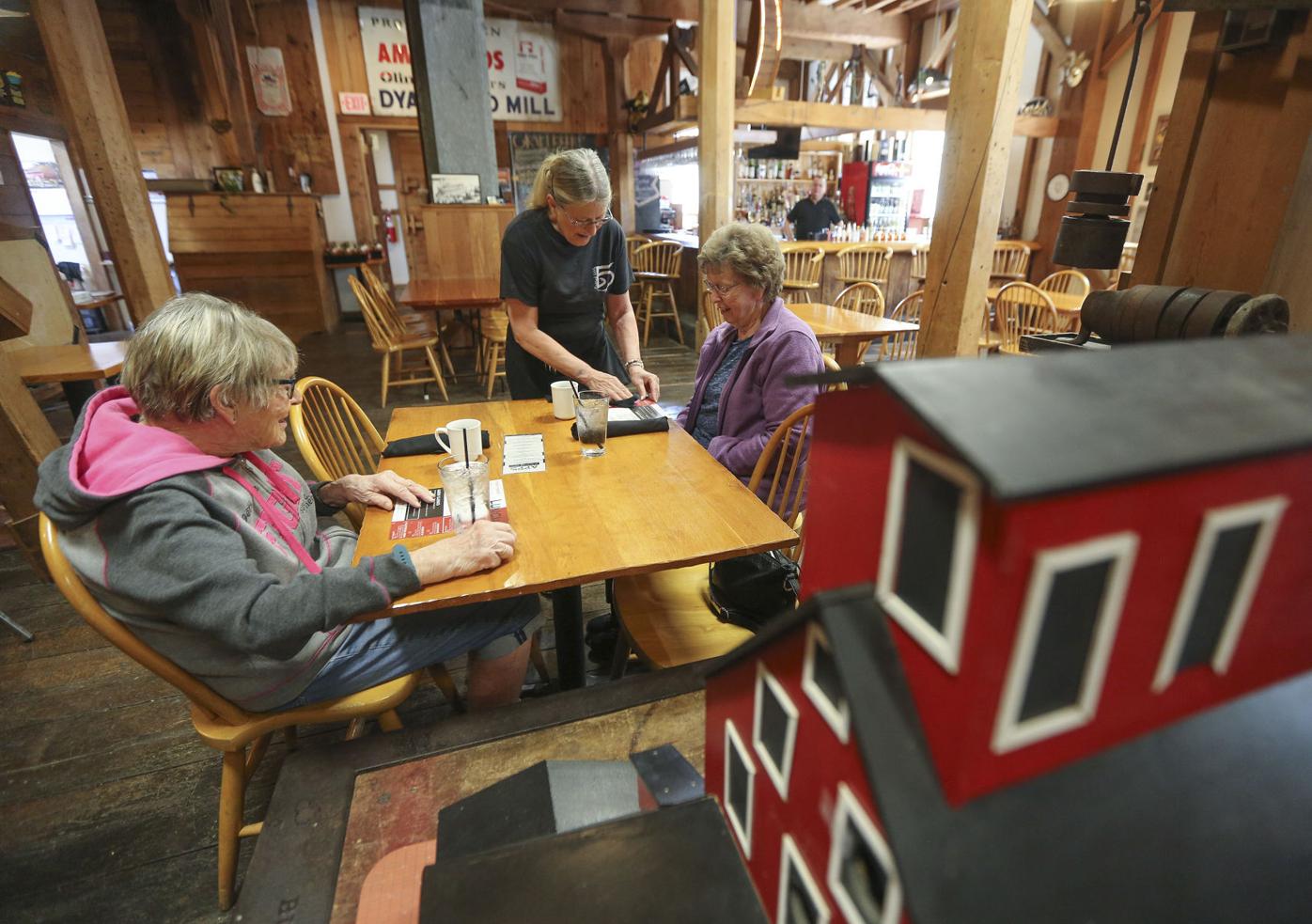 Lou Ann Meier, a waitress at Flatted Fifth Blues & BBQ in Bellevue, Iowa, serves customers Janet Koehler (left) and Joyce Till, both of Andrew, Iowa, at the restaurant on Thursday. 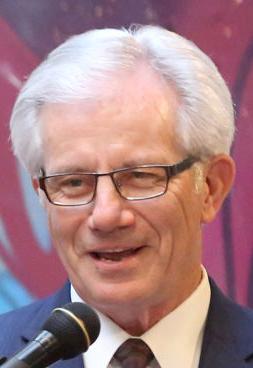 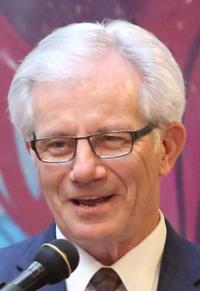 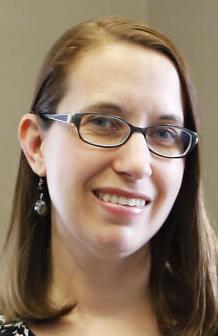 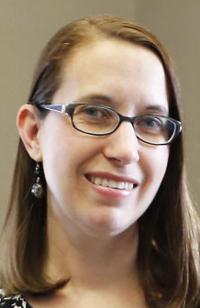 Lou Ann Meier, a waitress at Flatted Fifth Blues & BBQ in Bellevue, Iowa, serves customers Janet Koehler (left) and Joyce Till, both of Andrew, Iowa, at the restaurant on Thursday.

At Flatted Fifth Blues & BBQ in Bellevue, Iowa, recovery from the COVID-19 pandemic has been steady but not swift.

“(The recovery) has taken longer than I would have liked,” admitted Mark Herman, who co-owns the eatery and live music venue. “But we are seeing a gradual increase in people who are coming out to eat and who are comfortable going out.”

More than 13 months after the virus arrived in the U.S., it is almost impossible to contextualize current economic struggles without considering the impact of the virus. Similarly, President Joe Biden’s efforts to improve a struggling economy are inextricably tied to efforts to help the country emerge from the shadow of COVID-19.

Rick Dickinson, president and CEO of Greater Dubuque Development Corp., thinks Biden largely has done well in that regard.

“I think the clearest impact so far is the 180-degree change in the handling of the pandemic,” said Dickinson. “The new administration has taken a science-based approach and realized this has to be dealt with in a forthright manner.”

Molly Grover, president and CEO of Dubuque Area Chamber of Commerce, said there have been some red flags so far from the Biden administration. They include the Protecting the Right to Organize bill, which is intended to boost union membership after decades of decline. While the U.S. House of Representatives approved the measure in March, it faces long odds in the Senate, where it will need the support of at least 10 Republicans.

“The administration has ... proposed some concerning initiatives including the PRO Act and tax increases on corporations and pass-through entities,” Grover said. “The Dubuque Area Chamber of Commerce supports pro-growth policies, and initiatives such as these only hamper and impede recovery efforts.”

Biden campaigned as a very pro-union candidate, making that the centerpiece to his first visit as a presidential candidate to Dubuque in 2019.

Grover added, “As with any administration, there are positives and negatives, but we look forward to continuing to work with all our elected officials from the Biden administration to our congressional delegation to advance policies that build a robust business climate.”

Biden has aimed to prop up the economy by signing the American Rescue Plan Act — a $1.9 trillion economic stimulus bill — on March 11. Key elements of the act included direct stimulus payments to qualifying individuals and families, an extension to enhanced unemployment benefits and grants for small businesses.

Dickinson said he believes the “jury is still out” on whether the legislation will be successful. He said its efficacy could come down to how people spend their stimulus money. If people merely put the money in the bank or use it to pay off debt, the stimulus funds won’t achieve the desired result.

Critics of the stimulus package have argued that its extension of unemployment benefits — the bill provides an extra $300 in weekly jobless benefits through early September — is slowing the economic recovery by decreasing citizens’ incentive to find work.

Kelly Cooper, executive director of Dubuque Area Labor-Management Council, said local manufacturing companies are seeing high demand for their products. But a lack of willing workers has stifled efforts to grow and expand.

Businesses are taking drastic steps to find workers. In addition to significantly upping wages, they have become increasingly willing to hire workers who have no prior training.

Companies also have looked at enhancing benefits packages or offering hiring and retention bonuses to keep and attract workers.

“We have long had a skills gap and workforce shortage issue in the area,” Cooper said. “It is really picking up and getting worse now.”

Herman is facing hiring struggles of his own, a problem that has forced him to put expansion plans on the back burner.

He worries that the stimulus bill’s vast infusion of cash soon could lead to another problem: inflation. Herman said costs for food and other supplies have already started to rise. He believes the $1.9 trillion act signed by Biden could contribute to that trend.

Dickinson, of GDDC, noted that the pandemic has hit some industries harder than others, with the hospitality, travel and restaurant industries among those facing the harshest circumstances over the past year. While he believes that far-reaching stimulus packages have helped matters, Dickinson thinks some economic sectors could have benefited from a more targeted approach.

“Those industries have continued to lag and, in some cases, the pandemic has resulted in closures,” Dickinson said. “There was perhaps not enough emphasis placed on the impact of the pandemic on that part of the economy.”

“We would have loved to have some more support, but we understand it’s a difficult situation,” he said. “How does (the government) support one industry more than the others?”

Like many local business owners, Herman is balancing the struggles of today with a hope for better times.

“I am anxious about the present,” he said. “But I am optimistic about the future.”

The Town Clock Inn, which has been a staple in downtown Dubuque for more than 50 years, recently announced the temporary closure of its physical location. Restaurant co-owner Irene Nelson cited staffing shortages as the main reason for the move, adding that the business will seek a smaller space.

“Unemployment is the issue,” she said. “There’s signs everywhere for employees. Everybody is struggling to find staff. I know a lot of restaurants that have had to close early. We’re no different than that.”

Scott Nelson, Irene’s husband and restaurant co-owner, said the restrictions on restaurants since the COVID-19 pandemic began have made it difficult for business owners to keep things running. At Town Clock Inn, he noted that they bought a food truck and started making frozen pizzas to stay afloat.

“We were always the place to go for big groups because we could accommodate that,” he said. “But once this pandemic started, our business model had to change pretty drastically just to survive.”

The Telegraph Herald reached out to local officials and residents from both political parties, as well as stakeholders involved in a range of issues impacted so far by the Biden administration's actions, to get their thoughts on his performance so far and what lies ahead.