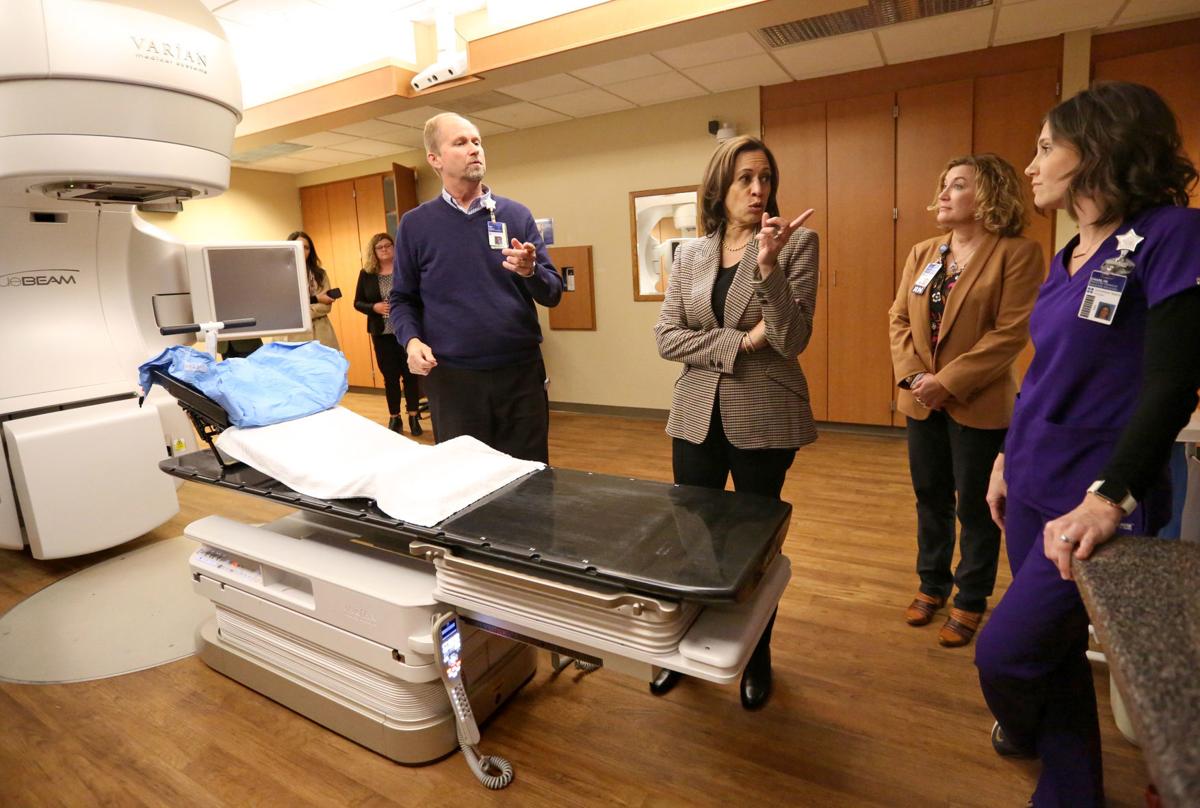 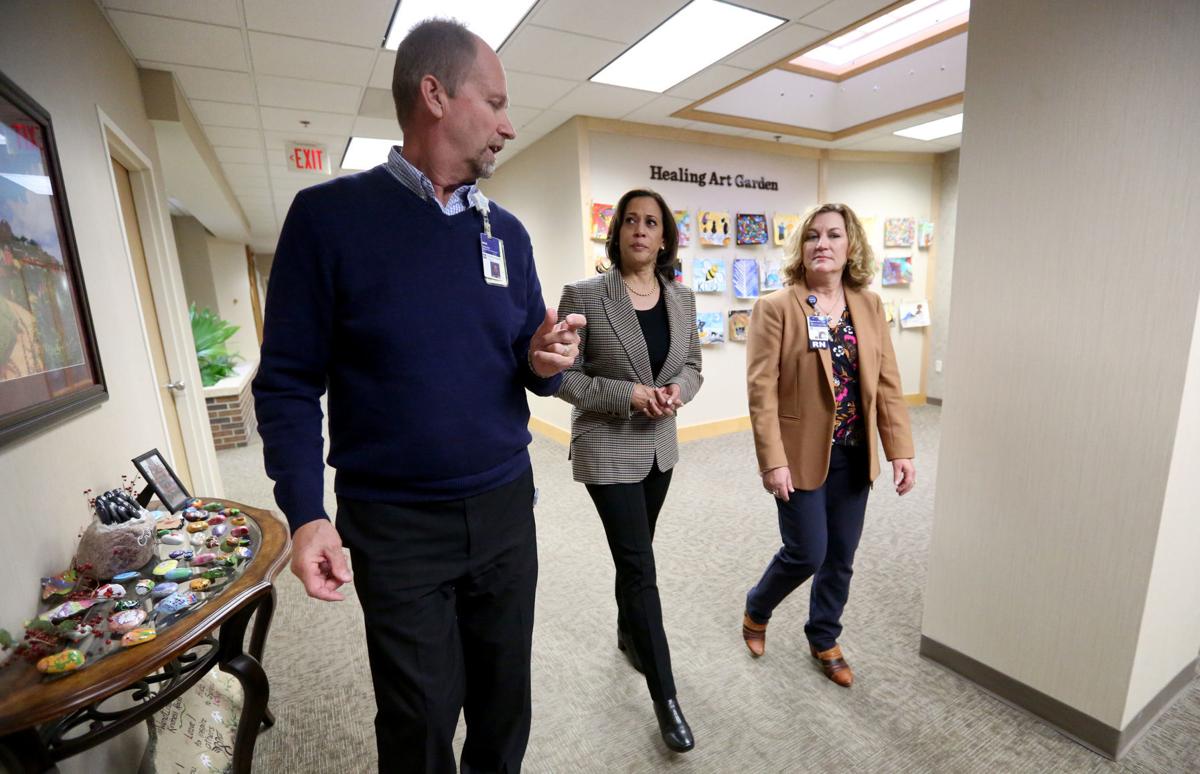 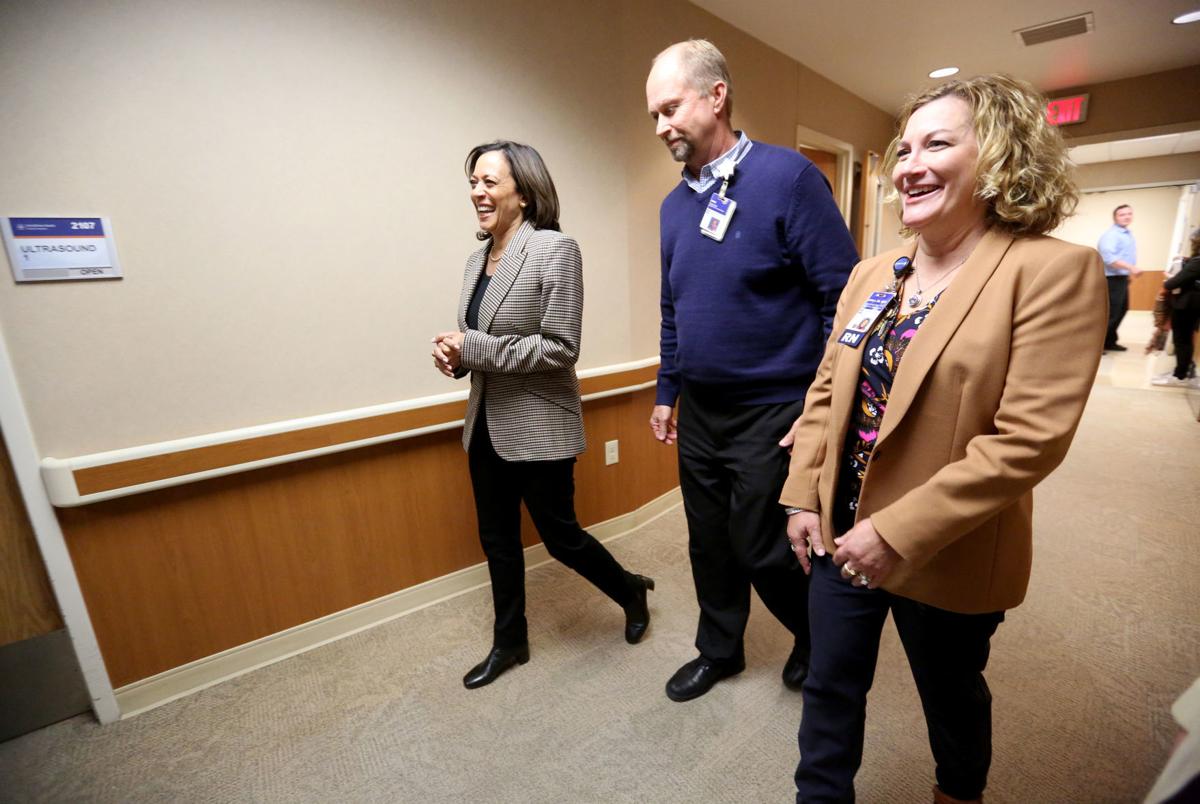 Between the latest Democratic presidential debate Tuesday night in Cleveland, and the town hall at 7 Hills Event Center in Dubuque, the lawmaker from California toured Wendt Regional Cancer Center at UnityPoint Health-Finley Hospital. With her, she brought a personal connection to the field, as her mother was a cancer researcher.

“My mother had two goals in her life — raise her two girls and end breast cancer,” she told the center’s manager, Mike Kelly. She later added, “I grew up with this as a subject of conversation my entire life.”

Throughout the visit, she discussed the possibility that the increase in breast cancer diagnoses nationwide might be attributed to increased awareness and screening, rather than a jump in incidents.

She also discussed insurance coverage of 3-D mammograms in Dubuque.

When mammography technologist Carissa Oberbrockling told her it was about 75%, but that there were local options to cover the 3-D procedure if a patient’s insurance didn’t, she nodded, relieved and taking note.

“It’s amazing that that’s what she brings to it,” Kelly said, as Harris spoke with Oberbrockling. “Breast cancer is obviously at the forefront of lots of people’s minds, but having someone as important as Sen. Harris here can only move that a long way.”

Harris claimed to have had little more than two hours of sleep after Tuesday’s debate.

On that stage, though, during a high-level debate about health care plans, Harris brought it to a specific level: women’s access to reproductive health care. She told the Telegraph Herald that she plans to continue bringing the discussion down to real, topical levels.

“We shouldn’t be six debates in and not have it brought up in meaningful conversation,” she said. “It should be the topic of serious debate. Women make up a majority of this country. We don’t have enough facilities open to women. What is happening around places like this in Dubuque, where women have access to treatment for breast cancer — these are the big issues.”

Harris said her health care plan, which she still calls “Medicare for all,” allows people to keep their private insurance if they want it for 10 years. Then, it features universal public insurance. She insists it would not increase taxes on the middle class.

“Unfortunately for her, Iowa caucusgoers know that Harris is using baseless accusations to distract from her unpopular plans to take away private health insurance and raise the taxes of Hawkeye families,” a spokesperson said in a prepared statement.

Harris drew a crowd of more than 300 Wednesday night at 7 Hills Event Center.

“Her ‘Medicare for all’ plan — although that’s a bit of a misnomer — seems like one of the more realistic ones to me,” he said. “I think her 10-year transition is too long, but the emphasis she has is right. Most people who want to keep their plan actually want to keep their doctor. That’s her point.”

“She says we’re a neighborhood, and we’re all neighbors,” Moss said. “We don’t shut our eyes or turn our back on our neighbors.”