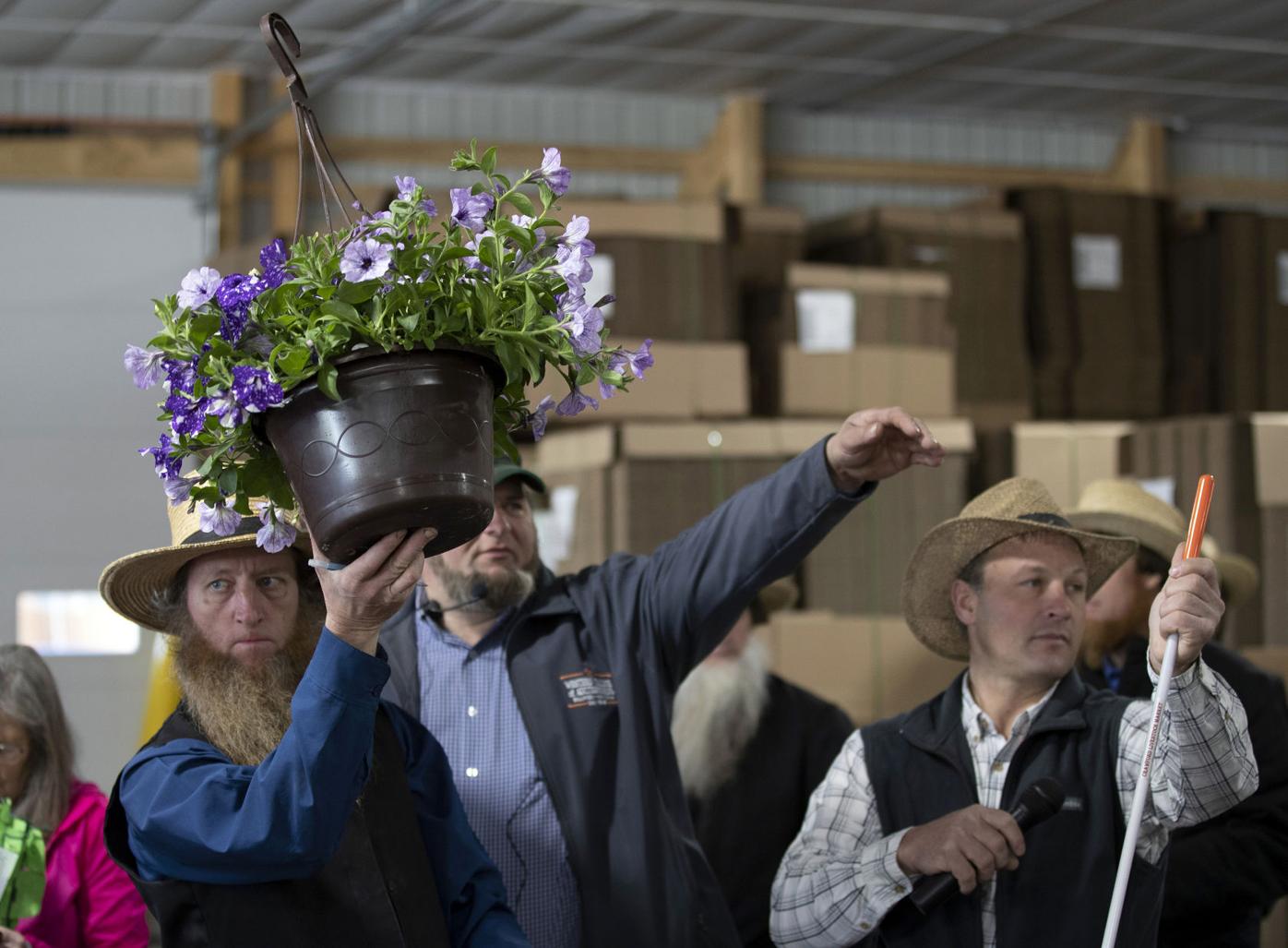 Amos Beiler holds up a basket of flowers as auctioneer Eugene Hostetler and manager Kevin Hall watch for bids at Platteville (Wis.) Produce Auction on Friday. 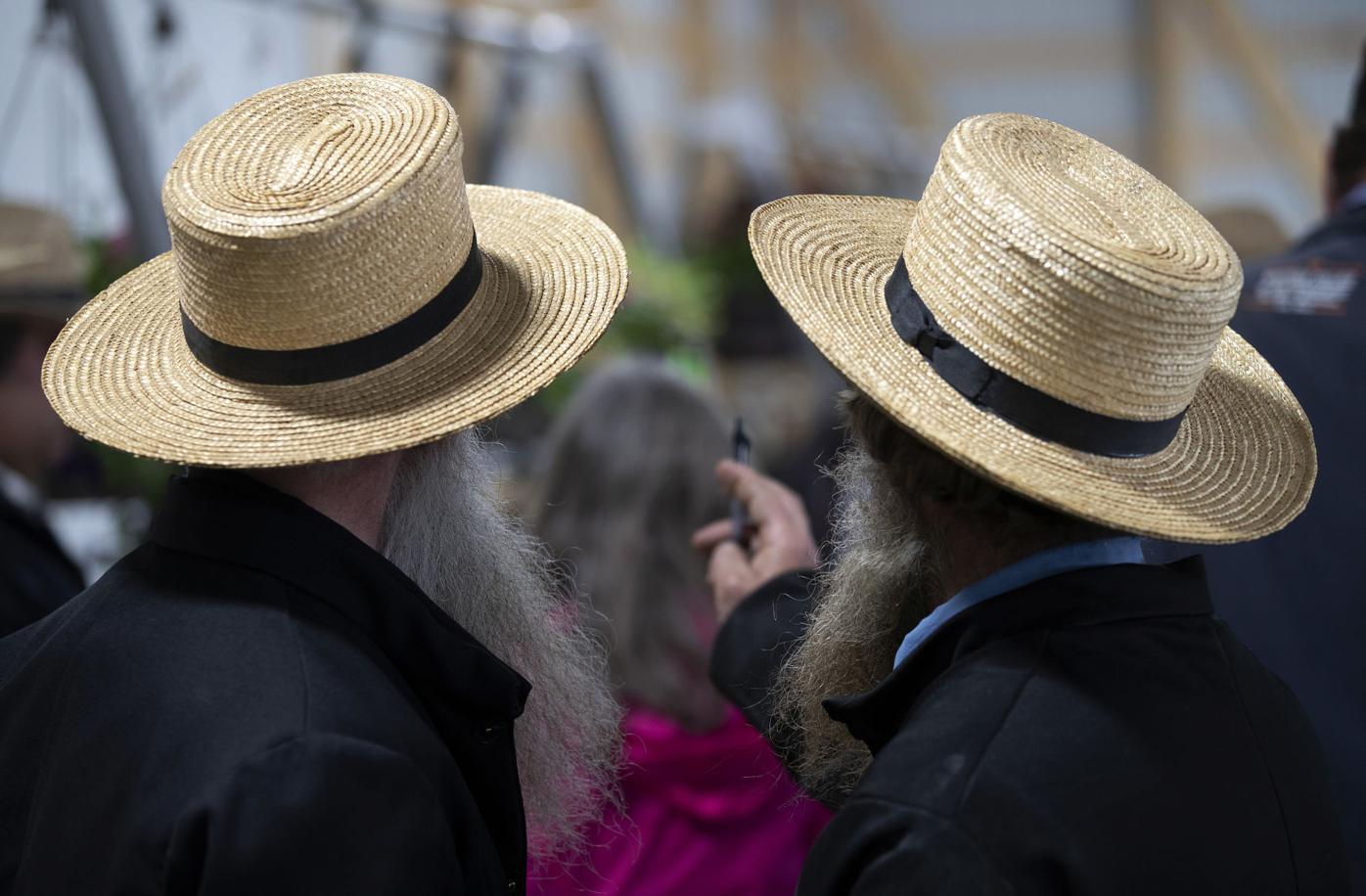 Attendees watch as flowers are put up for auction at Platteville (Wis.) Produce Auction on Friday.

Amos Beiler holds up a basket of flowers as auctioneer Eugene Hostetler and manager Kevin Hall watch for bids at Platteville (Wis.) Produce Auction on Friday.

Attendees watch as flowers are put up for auction at Platteville (Wis.) Produce Auction on Friday.

PLATTEVILLE, Wis. — A torrent of words cascaded through the spectators. On the sale block were six trays of leafy squash and cucumber plants.

His arm swung past trays of scarlet gerbera daisies, to another bidder.

“Now, a quarter. Now, a half,” Hostetler continued, his fingers ping-ponging between the challengers.

Floor Manager Kevin Hall scanned the crowd behind Hostetler, where the auctioneer could not see. Hall interjected with a “yep” when he spotted a bid.

He swept his arm down the line in search of more bids.

Money changes hands with just a wave or a nod at the newly organized Platteville Produce Auction. The bidding started at 9:30 a.m. Friday, the operation’s second week in action.

The event is held in a newly constructed barn off Grant County D, a few miles northwest of Platteville. The 100-by-152-foot, semi-open-air facility housed its first auction two weeks ago after nearly a year of planning and construction. Volunteers constructed it.

It is owned and overseen by approximately 75 shareholders. The majority of growers are area residents, who sought a new outlet for selling fresh produce in southwest Wisconsin.

“As time went on, we saw a need to make a living off a small acreage,” said Amos Stoltzfus, a Belmont farmer who serves on the auction barn’s board of directors.

“Having a pool like this brings a lot more wholesale buyers,” he said, while affixing tags to pinewood ornamental planters. “If you bring it together at one spot, it makes it much more convenient for larger buyers.”

Approximately 25 local producers have sold flowers at the barn, and as the growing season continues, they will add a plethora of fresh produce such as strawberries, asparagus, watermelon, sweet corn and gourds. The final auction is Oct. 26.

Many growers have sold their produce at auctions in Fennimore or Cashton, but transport costs cut into their profits.

The auction barns also have reached capacity, making it harder for new growers to find a foothold.

Amos Beiler, of Platteville, started selling flowers and produce this year. He hurried as he hung baskets of petunias.

“The green and black (blooms) — that’s a funky color,” he said, gesturing to a row. “We’ll see how they sell. That decides next year’s growing season.”

Flowers are auctioned in lots, usually in multiples of 10 to 20, which tends to attract buyers who operate plant nurseries, groceries, restaurants or roadside stands.

But even homeowners undertaking a garden overhaul might find a use for 15 trays of magenta impatiens.

“I think COVID brought more people back to their homestead or their house,” said Cindy Reynolds, who sells flowers and produce at her Dodgeville farm.

She is pleased by the location of the new auction barn and believes the new competition will benefit customers.

Prices are not set in Platteville but reflect what buyers are willing to pay, which organizers said is a true reflection of supply and demand.

The auction is growing in popularity, with the number of buyers doubling to about 70 registrants since the barn opened.

Bidding lasts about two to 2½ hours or until all wares are sold. Outside, visitors can purchase freshly baked pie, breakfast sandwiches and doughnuts at a food trailer.

On Friday, buyers pulled their box trucks and conversion vans to loading docks, assisted by employees who helped trolley their flowers.

Platteville residents Mike and Doris Alt, who live down the road from the barn, soaked in the scene.

“We came looking for hanging baskets,” Doris said. “But I could go with just about anything.”

WHEN: Every Tuesday and Friday through Oct. 8. Tuesday only from Oct. 12 through 26.