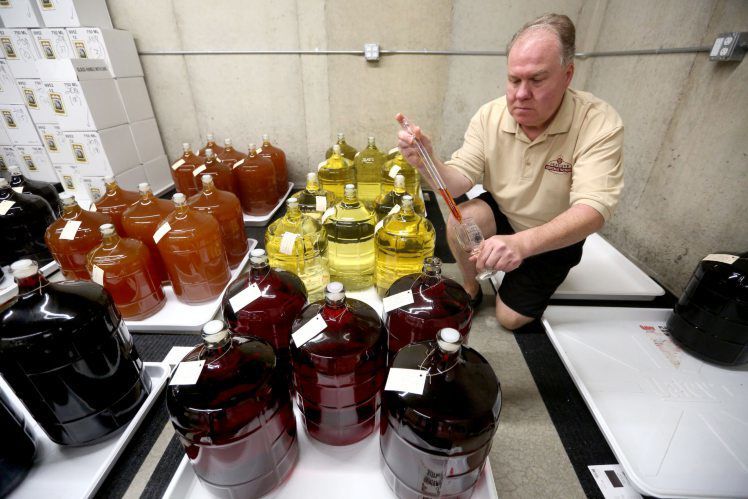 Matt Haas draws a sample for testing at Dubuque Heritage Winery. Haas is the co-owner and winemaker. He began making wine in 2003. After posting success in a contest, he began to produce wine professionally in 2012. Since then, his wines have won numerous awards. 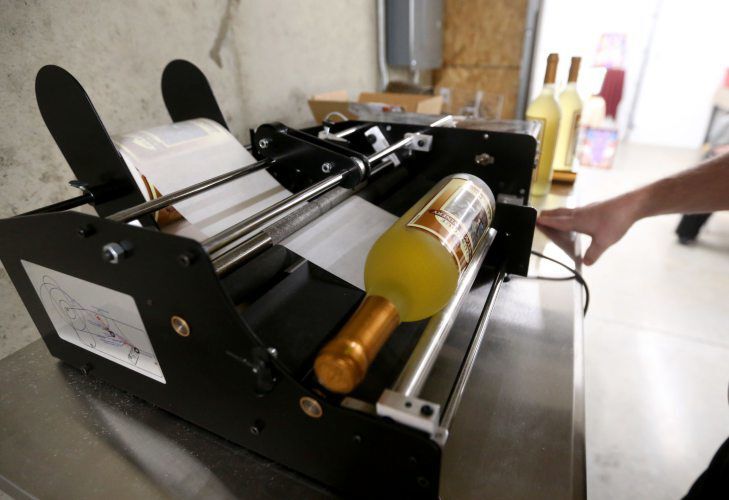 A bottle is labeled. 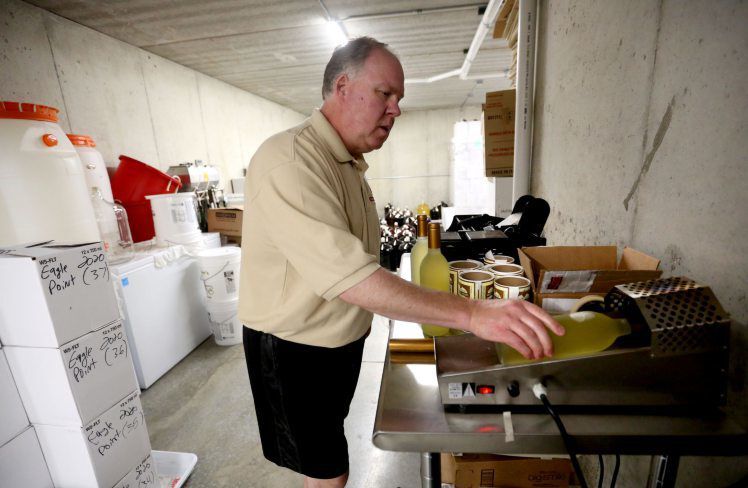 A variety of wines offered at Dubuque Heritage Winery in Dubuque. 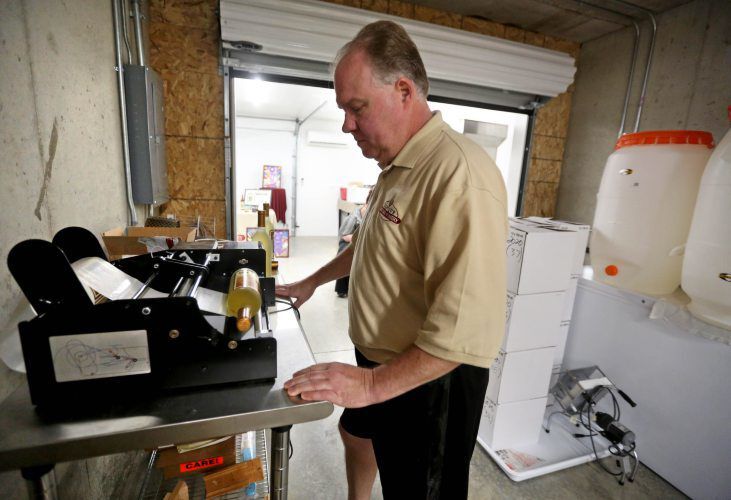 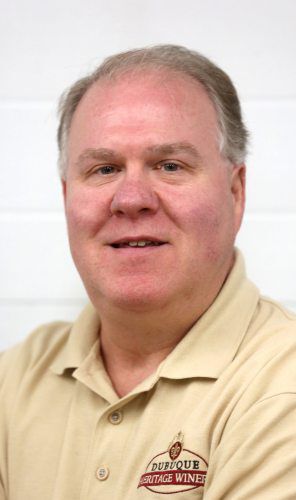 Matt Haas draws a sample for testing at Dubuque Heritage Winery. Haas is the co-owner and winemaker. He began making wine in 2003. After posting success in a contest, he began to produce wine professionally in 2012. Since then, his wines have won numerous awards.

A bottle is labeled.

A variety of wines offered at Dubuque Heritage Winery in Dubuque.

The business operates within a garage attached to the home of its two owners, Dubuque residents Matt and Kathleen Haas.

A brief look at the winery’s accolades, however, proves that it is punching far above its weight.

One year ago, Dubuque Heritage Winery earned Wine of the Year at the Indy International Wine Competition, besting 1 ,800 other wines from 36 states and 14 countries.

Matt Haas said that his winery is the only one in Iowa to earn that distinction.

Since Matt started making wines nearly two decades ago, he has garnered more than 300 awards at state, regional, national and international competitions.

To Matt and Kathleen, such honors send the important message that local wines, once presumed to be inferior to their coastal counterparts, stack up among the best in the nation.

“Iowa wines often get a bad rap,” said Kathleen. “We are trying to build a regional identity.”

Matt’s interest in winemaking was piqued about two decades ago, when he and his oldest brother collaborated to grow grapes on a few tillable acres of local land.

In 2003, Matt branched off and began making wines in his apartment. Curious where he stacked up against others, he ultimately decided to enter four of his wines in an international contest: The submissions yielded two gold, one silver and one bronze medal.

It proved to be a turning point.

He made the leap from amateur winemaker to professional in 2012, when he and his wife launched a winemaking operation in a garage on their former Dubuque property. When the couple moved to another Dubuque home in 2018, their winery moved along with it.

Through the years, the owners have perfected the process of obtaining high-quality ingredients and turning them into top-notch finished products.

Dubuque Heritage Winery uses locally produced grapes as well as some “juices” made from real grapes in locations such as upstate New York. Kathleen is particularly prideful about the local connections.

“We use a variety of grapes that are grown locally,” she said. “We’ve done a lot to reach out to those small-scale growers and work with them.”

Despite operating on a smaller scale than others in the industry, Matt has plenty of tools at his disposal.

His workspace features bottling and corking machines, as well a variety of lab equipment that allows him to test existing wines and experiment with new ideas.

Dubuque Heritage Winery produces a dozen kinds of wine, including multiple selections of both reds and whites. Dessert wines and fruit wines also populate the menu, underscoring the varied nature of the creations.

The winery does not feature a tasting room and traditionally has sold its products at area farmers markets. This year, however, COVID-19 prompted the winery to temporarily halt sales at those gatherings.

Customers can find the wines at multiple stores across Iowa, including all three Hy-Vee locations in Dubuque.

For years, the collaboration between the husband-and-wife duo at the head of the winery has proven to be a critical ingredient.

The moniker itself comes from a conversation between Matt and Kathleen.

“We were sipping on some wine and discussing the winery, and (Kathleen) said, ‘Why don’t we do something that celebrates Dubuque’s name and heritage?’” Matt recalled.

In addition to the business name, the wines also bear references to Dubuque. Local landmarks are represented in products such as the Shot Tower Red and Town Clock Seyval.

Kathleen handles the winery’s bookkeeping and facilitates tastings for customers, often educating them about wine in the process.

Matt handles the winemaking duties, an undertaking he has honed through years of trial and error. His wife marvels at his abilities.

While each wine goes through a slightly different process, most wines generally go through similar steps.

Crushed grapes or juices are combined with yeast, which converts sugars into alcohol.

The next steps in the process can take a variety of forms, depending on the type of wine one is creating. For red wines, this might involve pressing grapes; for whites, it could mean a process of clarifying the liquid.

Some products are aged before hitting the market.

While the process and taste might vary depending on the particular product, the owners of Dubuque Heritage Winery emphasized that all products are made with a strong commitment to quality.

As the business continues to rack up awards and bolster its reputation, Kathleen is happy to be taking that journey with her husband by her side.

“It has been a learning process, and we may not always agree on everything,” she said. “But we have grown together a lot, both as business owners and as a couple.”

Made in the Tri-states

Watch for new installments on the first Sunday of each month. If you have a suggestion of a product for us to feature, send an email to jeff.montgomery@thmedia.com.