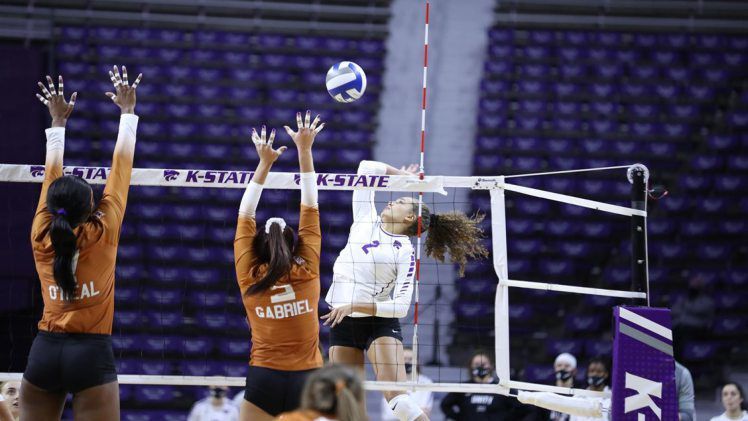 Kansas State’s Aliyah Carter hits the ball during a match with No. 1-ranked Texas on Friday night in Manhattan, Kan. 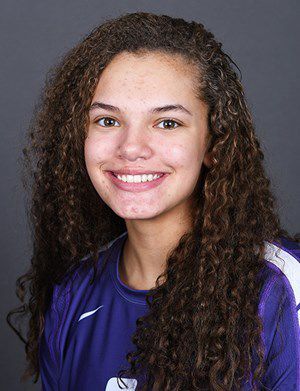 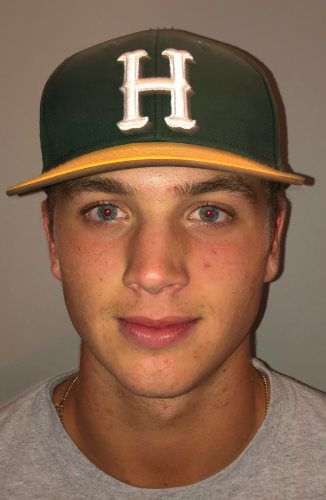 Aliyah Carter has always taken her volleyball to another level when playing on the biggest stage.

Why should college be any different?

Carter, who led Dubuque Wahlert to back-to-back Iowa Class 4A state championships as a sophomore and junior, set a Kansas State University freshman record with 26 kills on Friday night against No. 1-ranked Texas. The No. 13-ranked Wildcats pushed the Longhorns before dropping a 25-19, 21-25, 20-25, 25-18, 15-7 decision in a Big 12 match televised by ESPN2.

Carter broke the record of 25 kills set by Kylee Zumach in 2014. Carter recorded eight kills in the third set, six each in the first and fourth sets and finished with a team-high .293 average.

“I think she’s fearless,” Kansas State coach Suzie Fritz said. “I think that’s maybe the thing I like about her the most. She’s done a nice job of competing. She doesn’t back down from a challenge, she’s fearless in that way. I think a lot of those freshmen have shown that.

“Those are the people that grow up fast. You can learn a lot in those moments.”

Texas, which has lost only three sets all season, improved to 7-0 and 7-0 in the Big 12, while Kansas State moved to 3-2 and 3-2. The teams were scheduled to meet again Saturday night.

Carter’s older brother, former Dubuque Senior standout Noah Carter, will be a sophomore on the University of Northern Iowa men’s basketball team this winter. The Panthers have been picked to win the Missouri Valley Conference championship in a preseason poll of coaches, sports information directors and media.

Sabers commits to Kirkwood — Zach Sabers, who helped Dubuque Hempstead reach the Iowa Class 4A state baseball semifinals this summer, verbally committed to play at Kirkwood Community College in Cedar Rapids, Iowa, next season. He will join his Mustangs teammate, Andrue Henry, who recently began his freshman year with the Eagles.

Sabers will provide the Eagles with a versatile Swiss Army Knife of a player after contributing to the Mustangs at third base, shortstop, pitcher and catcher. This summer, he earned Class 4A second-team all-Northeast District honors from the Iowa High School Baseball Coaches Association and second-team all-Mississippi Valley Conference honors after hitting.439 (25-for-57) with seven doubles, two home runs, 10 RBIs and 10 walks. On the mound, he went 0-0, with a 4.85 ERA, two saves and five strikeouts in 8 2/3 innings.

Vujnovich averaged 36.9 yards per punt for the Spartans, who finished 7-3 overall and 6-2 in the American Rivers Conference. Of the three punters on the Badgers’ roster, he is the only one with previous collegiate experience.