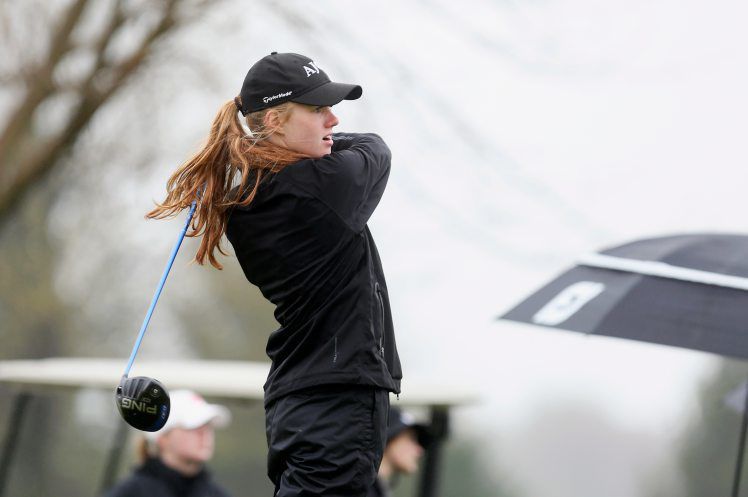 Dubuque Wahlert’s Anna Jensen follows her tee shot during a meet at The Meadows in Asbury last season. Jensen and Anna Nacos will represent Team Iowa in the 4-State Junior Girls Championship in Columbia, Mo., on June 30-July 2. 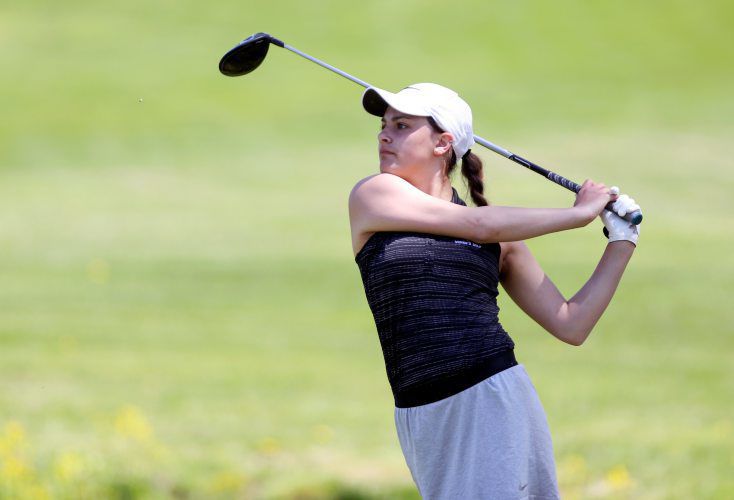 Anna Nacos will join Anna Jensen to represent Team Iowa in the 4-State Junior Girls Championship in Columbia, Mo., on June 30-July 2. Nacos golfed for Wahlert in 2019 before moving back to her native Washington last year.

Dubuque Wahlert’s Anna Jensen follows her tee shot during a meet at The Meadows in Asbury last season. Jensen and Anna Nacos will represent Team Iowa in the 4-State Junior Girls Championship in Columbia, Mo., on June 30-July 2.

Anna Nacos will join Anna Jensen to represent Team Iowa in the 4-State Junior Girls Championship in Columbia, Mo., on June 30-July 2. Nacos golfed for Wahlert in 2019 before moving back to her native Washington last year.

Anna Jensen and Anna Nacos are looking forward to being on the same team once again.

After all, the one season they were together they made school history.

As stars at Dubuque Wahlert in 2019, Jensen finished runner-up and Nacos was right behind her in third to help the Golden Eagles to the Iowa Class 3A state golf team championship, the program’s first title in 45 years. However, health issues in her family forced Nacos to return to her native Washington (Iowa) this past year, making the one season her only with the Golden Eagles.

The two star golfers will reunite on June 30-July 2 as members of Team Iowa at the 4-State Junior Girls Championship at Country Club of Missouri in Columbia, squaring off with each state’s best prep golfers from Nebraska, Kansas and Missouri.

“It’s going to be really fun having a Wahlert teammate going with me,” said Jensen, who closed her career as a back-to-back state runner-up and was aiming for a title this past spring before the season was canceled. “Her skill level is very high and we’ve become very close over the last year. It’s fun to have a close friend on the team with me.”

The 4-State Junior Girls Championship rotates between the states every summer, and each team consists of six girls and two coaches from each state. The format of the event is a “Ryder Cup Style” match play (four-ball, foursomes, singles).

“It’s going to be so fun,” Nacos said. “The girls from all states are competing for the same thing and we’ll be cheering each other on in the process. We want the best for everybody. Playing with Anna again is going to be great. It’ll be like old times.”

Jensen — who will be joining the University of Northern Iowa program in the fall — participated in the event last summer in Nebraska City, which was won by the home state. She also finished fifth overall at the 44th annual Iowa Girls Junior PGA Championship last June.

“Obviously it’s very competitive with some of the top golfers in each state,” Jensen said. “It was definitely a learning experience last year. Most of the golf I play is so competitive, and while this is competitive it’s also very team-oriented and really fun. It’s mixing competition with fun, which I like.”

Nacos’ father is a Wahlert grad from Dubuque. Despite their permanent home in Washington, the family visits the area often and the opportunity arose to join the Golden Eagles’ program. Health issues within her family led to having to leave after only one year, but Nacos greatly enjoyed her sole season as an Eagle.

“It was a great experience and something new and different,” said Nacos, who’s sister, Sarah, twice competed in the 4-State Championship. “The school atmosphere and time in golf and basketball, I’ve never been more welcomed. Unfortunately, the health issues were a lot in one year to take. And now with COVID, it was a good decision.

“I’ve known these girls for a long time and we’re usually playing against each other,” Jensen said. “But to be on the same team makes it a really fun experience.”

Both golfers, like many across the nation, are just excited to get the opportunity to play competitively.

“With COVID it’s been very difficult to find tournaments, especially early in the summer,” Jensen said. “Things are starting to open up and the field of girls is getting so much bigger and more competitive. The more competition you have prepares you more for the college season, so I’m looking forward to it.”