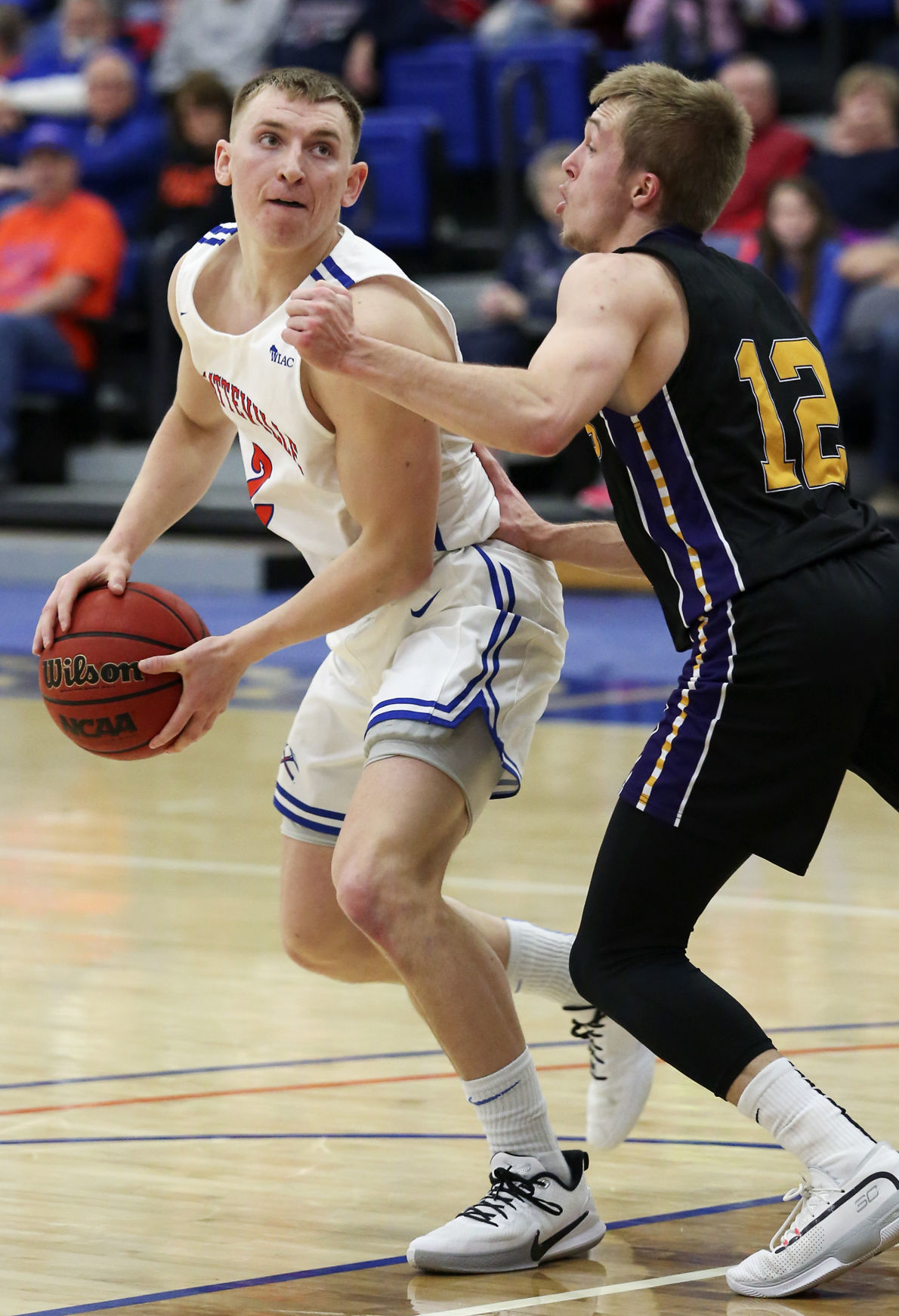 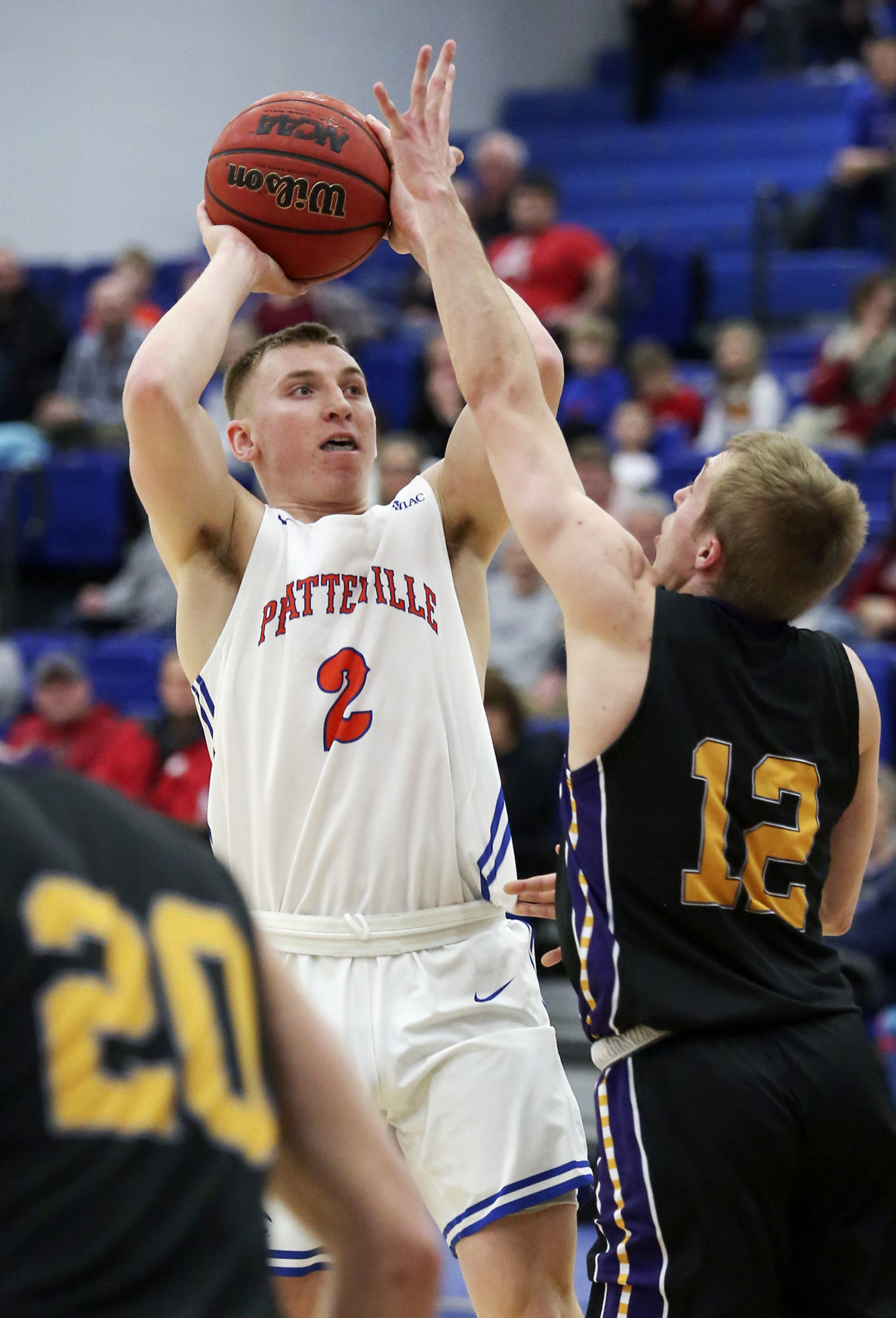 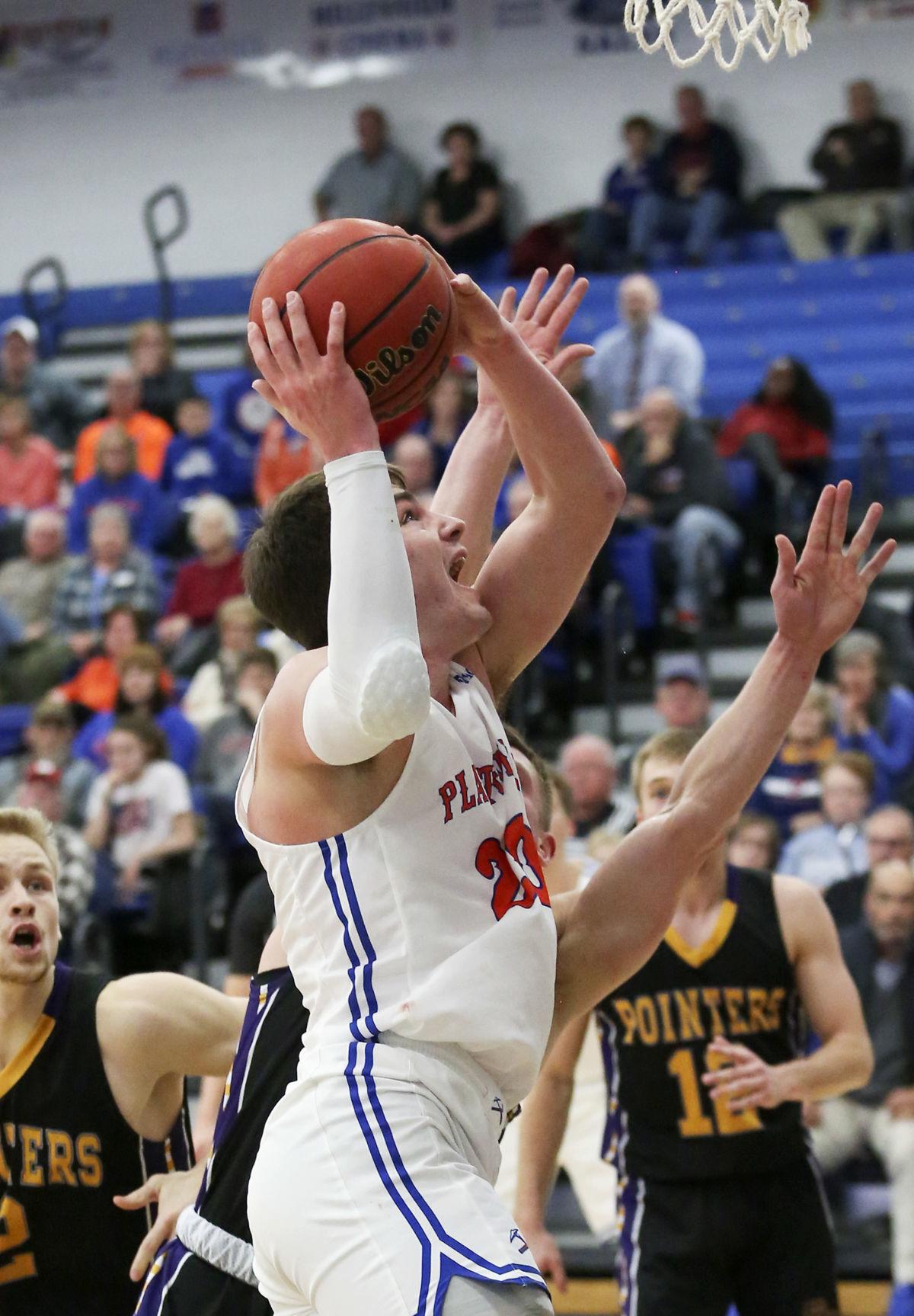 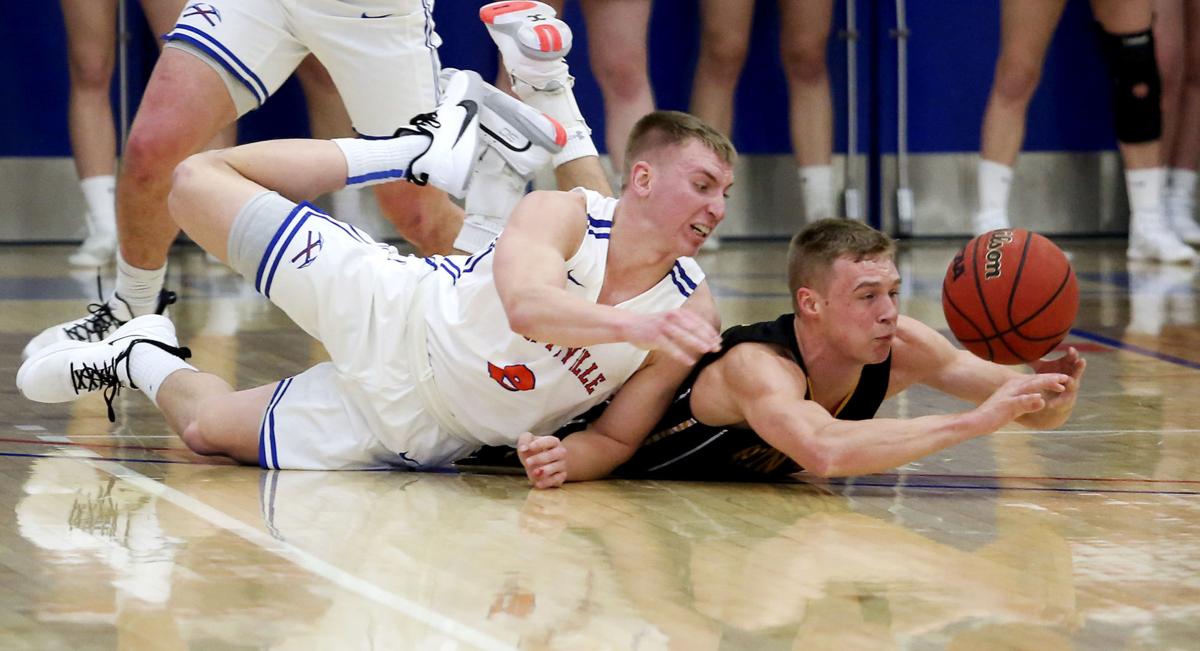 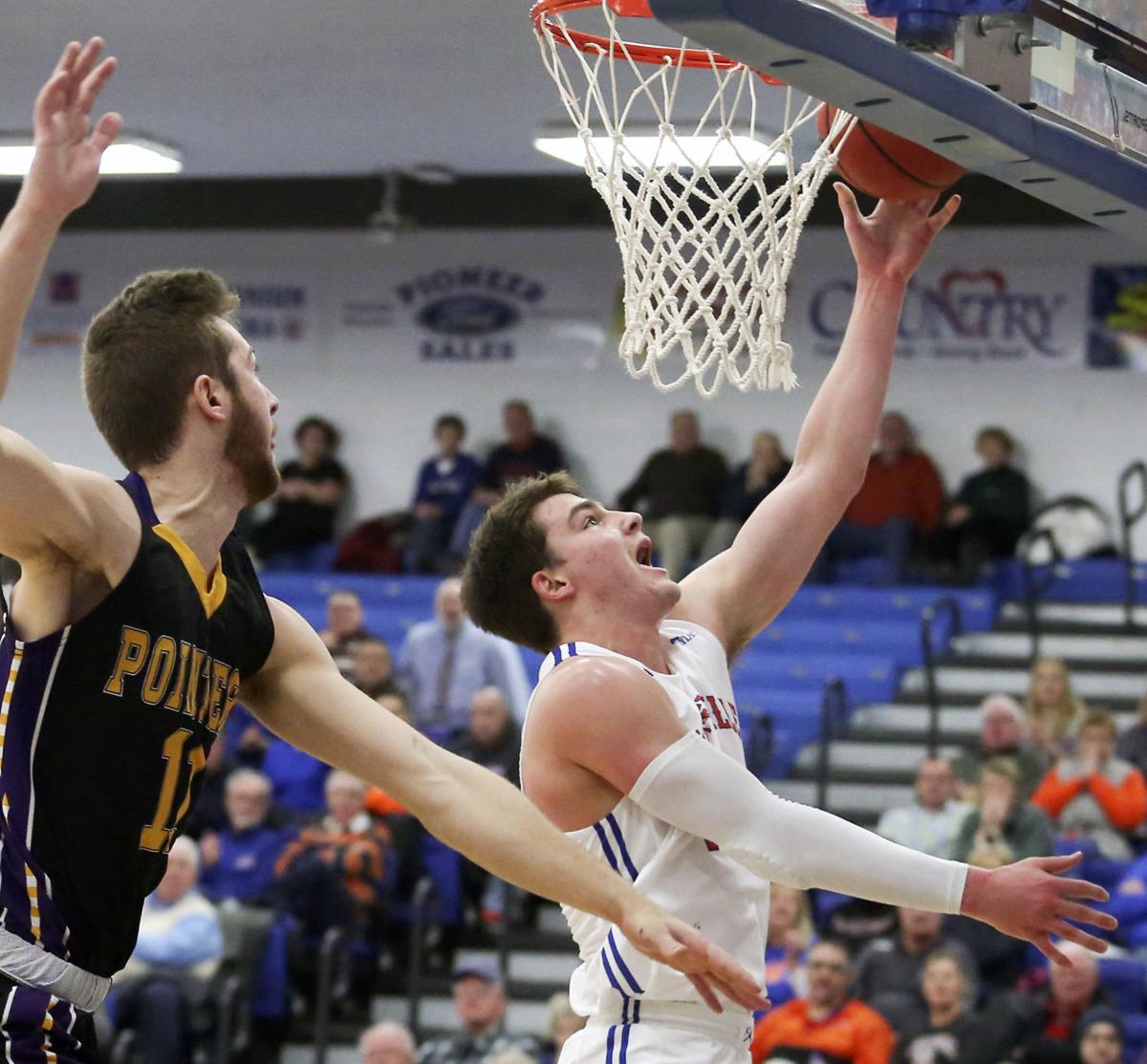 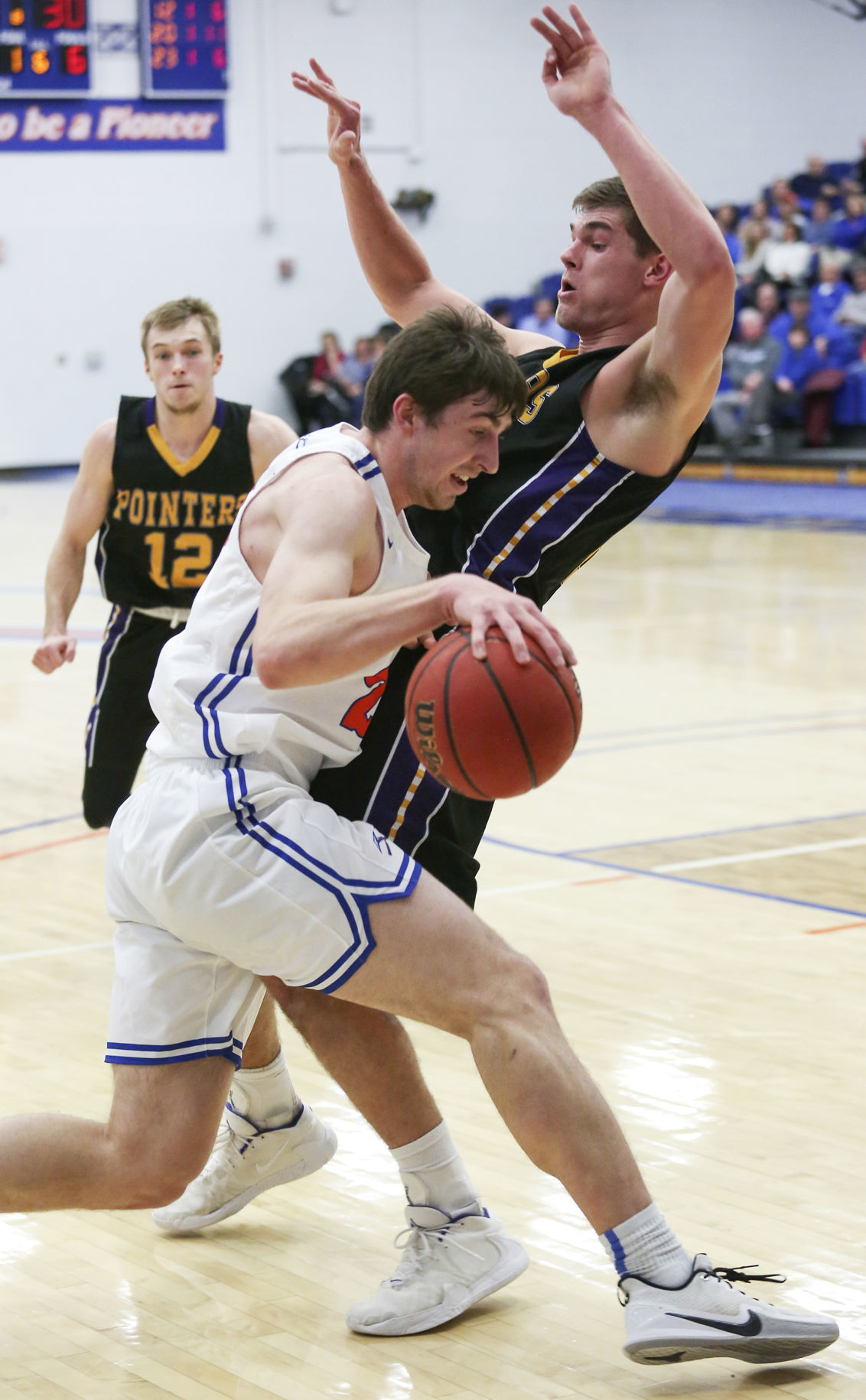 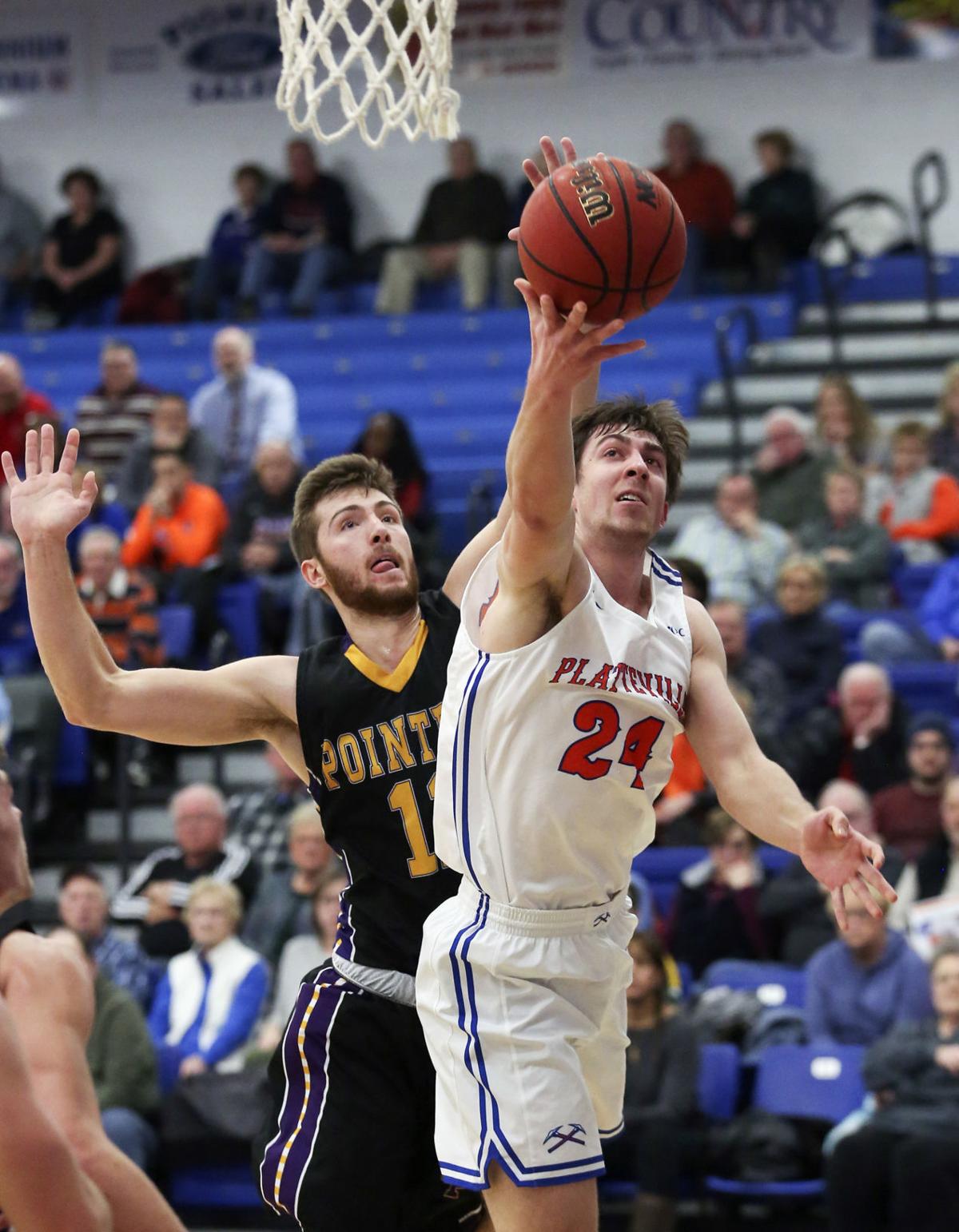 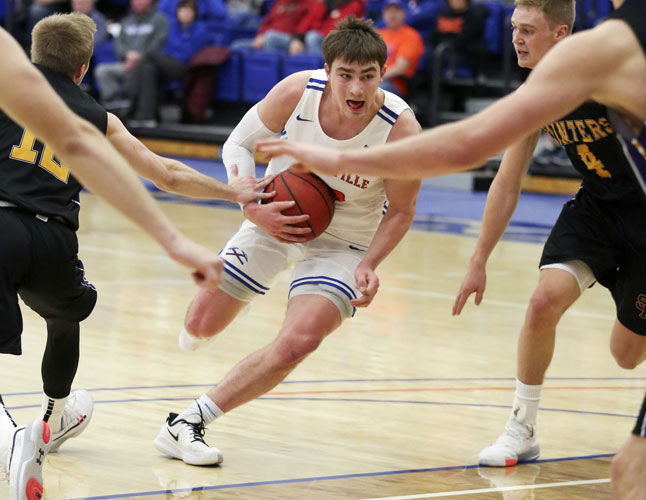 UW-Platteville’s Carter Voelker (middle) drives to the basket during Wednesday’s game against UW-Stevens Point in Platteville, Wis. The No. 7 Pioneers lost to the Pointers, 66-64, for their first loss in the Wisconsin Conference.

UW-Platteville’s Carter Voelker (middle) drives to the basket during Wednesday’s game against UW-Stevens Point in Platteville, Wis. The No. 7 Pioneers lost to the Pointers, 66-64, for their first loss in the Wisconsin Conference.

PLATTEVILLE, Wis. -- UW-Platteville’s climb in the rankings will soon take a fall after running into the WIAC’s top defense.

Unranked in the D3Hoops.com top 25 preseason poll, the Pioneers quickly made an impression early in the season and have only elevated their national status throughout the first half of the season.

Fresh off of rising to No. 7 in the latest rankings, UW-Platteville squared off with UW-Stevens Point’s stingy defense on Wednesday night at Williams Fieldhouse. Carter Voelker scored 24 points with 13 rebounds and Alex Ranney added 10 points, but the Pioneers committed 17 turnovers and watched as Voelker’s potential game-winning shot banked off the rim too hard in the Pointers’ 66-64 upset at Bo Ryan Court.

Blake Ehrke scored 21 points and Garrett Nelson added 18 for Stevens Point. Pioneers leading scorer Quentin Shields was injured in the first half and only played 5 minutes.

“Give credit to Point, they played aggressive,” UW-Platteville coach Jeff Gard said. “They were able to play through some stuff and their physicality sort of got us on our heels a little bit. We tried to do a little too much one-on-one and not using your tandems out there. Looking to your teammates.”

The Pointers (11-4, 3-1 WIAC) are the top defensive team in the league and ninth in all of Division III, allowing 61.2 points per game. The Pioneers (13-2, 3-1) also pride themselves on defense and are second in the WIAC and 11th in Division III in allowing 62 points per game. It made for a riveting clash that featured five lead changes and six ties.

“You’re looking at two of the top defensive teams in the conference,” Gard said. “It was going to be a matter of playing disciplined and don’t beat yourselves, don’t beat Platteville. Offensively, we had to be better. We had way too many turnovers in the first half and it was careless of us.”

Voelker opened the game with a swish from beyond the arc and helped build an 8-2 lead, but the Pointers responded with a 12-0 run to take a 14-8 lead at the 12:30 mark. Stevens Point kept up the pressure and extended the lead to six again, but Voelker scored on a tough drive plus a foul and Kyle Tuma got the shooter’s roll on a 3-pointer to tie the game at 28-28 with 4:32 until halftime.

After the Pointers answered with another five-point streak, Platteville rallied again as Blake McCann’s free throws in the bonus gave the Pioneers the lead back at 34-33 with 52 seconds left, and the score held to the break. Platteville had an uncharacteristic 12 turnovers in the first half that helped the Pointers hold the lead for 12:35 of the half.

“When you thought they were going to start to break away, we hit some big shots,” Gard said. “We got back into it and then it flipped the other way. We had chances to extend the lead a little more, but shots don’t fall or you have a turnover.”

Following a tenacious drive from Voelker and a triple from Tuma gave the Pioneers a 42-37 lead at the 15:43 mark, the Pointers immediately responded with an 11-0 run to once again take control. Nelson then sunk a deep trey and converted inside to push the lead to 55-46 with 9:03 to go.

“That’s the beauty of the WIAC and that’s why it’s the best conference in the country,” Gard said. “You have to be very efficient on both ends of the floor and when you have those opportunities to have your hand to the throat, make sure you’re taking full advantage of it.”

Ranney heated up from the outside for two treys, Voelker scored inside and Drew Gunnink capped an 11-2 run as the Pioneers tied the game at 57-all with 5:03 remaining. Stevens Point executed a 9-4 run to make it 66-61 with 54 seconds left, but Ranney tipped in a shot and then Voelker hit the first of two free throws. Justin Fox grabbed the rebound on the ensuing miss and gave the Pioneers one last chance with 10.8 seconds left.

Voelker’s last shot for the win at the top of the key clanged off the glass and the front of the rim.

“The last time we got bumped down in Texas, I was extremely pleased with how we responded,” Gard said. “This group is resilient and will learn from it. There are 17 individuals in there right now that are very upset and angry knowing that they played a good game, but we beat ourselves. We’ll learn from it and it’s going to make us a better team.”