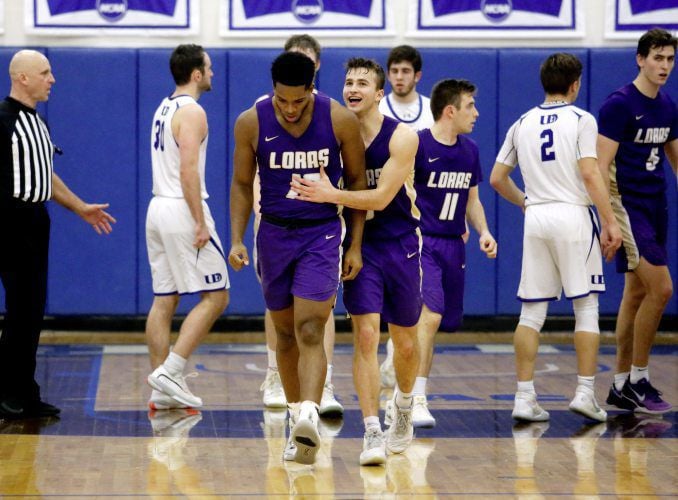 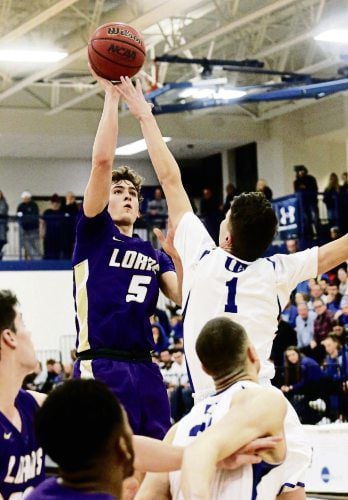 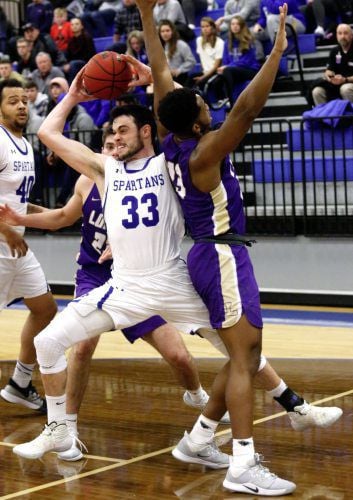 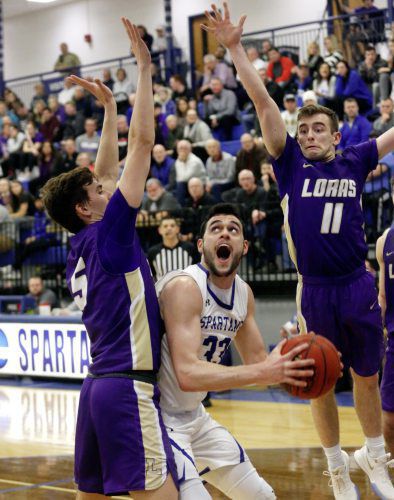 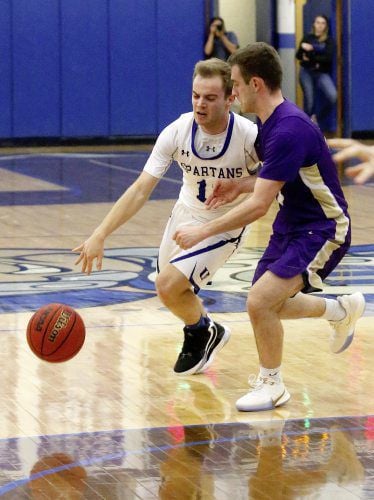 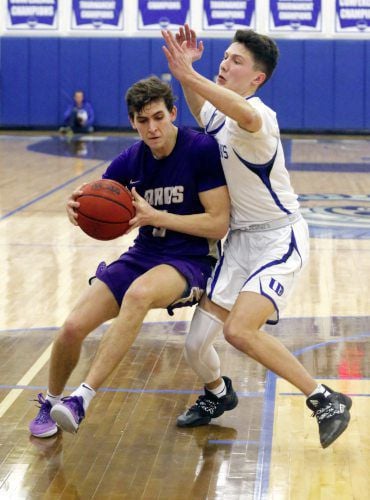 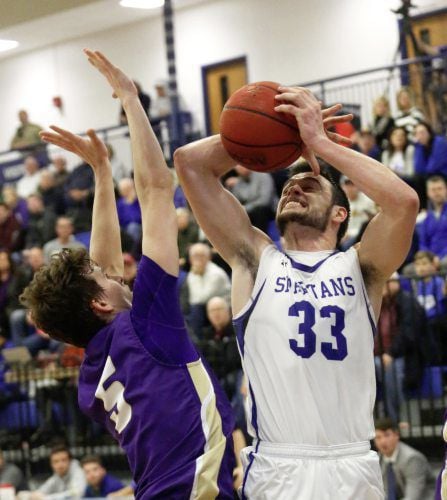 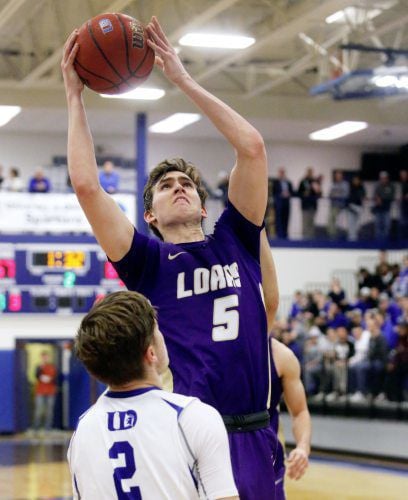 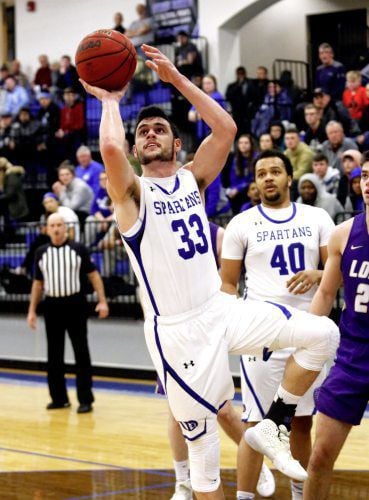 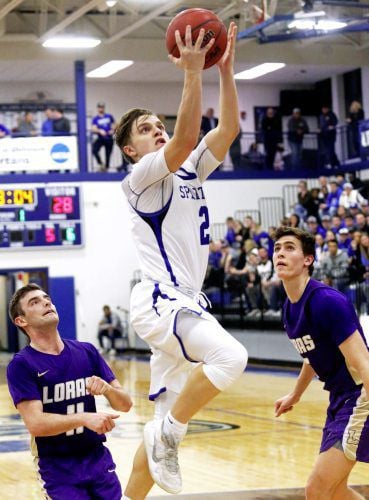 Each member of the Loras men’s basketball team has the same number on the back of his jersey: 12,000.

That’s how many seconds there are in a regulation basketball game. The Duhawks’ team motto this year is, in essence, to play hard for all 12,000 of them.

For the second time this year, Loras needed every last one of them against rival Dubuque.

JT Ford scored a game-high 25 points for the Duhawks and the Spartans couldn’t get a shot off during their final possession as Loras swept the team’s regular-season series with a 72-71 win at the Stoltz Center.

“It just takes toughness from our guys,” said Ford, a senior guard who scored 17 of his points in the second half. “It’s just putting everything together. We’ve worked crazy hard for this and every single one of us deserves it.

“Compete every single second — 12,000 seconds —whether it’s with each other or other teams.”

After Carter Stevens’ layup brought UD back to a tie, 67-67, Ford drained a floater and put back his own miss on back-to-back plays, giving the Duhawks a 71-67 lead with under 2 minutes to play.

Avery Butler converted an alley-oop for the Spartans and UD got a stop on the other end to put them within 71-69 with the ball in the final minute.

Peter Ragen’s would-be game-tying shot rimmed out on the following play, forcing the Spartans to foul to preserve time. Dimitric Young converted 1 of 2 bonus free throws to push Loras’ lead back to 3.

The Duhawks then fouled Dubuque guard Mitch Burger, who converted both free throws to make it a one-point game, 72-71, with 13.3 seconds to play. Ford missed his ensuing bonus free throw attempt, which gave possession back to the Spartans one last time in the final 10 seconds.

Burger drove to the lane and dished it to Ragen underneath the rim. Ragen pump-faked through contact and lost control of the ball. It wound up in the hands of Loras’ Matthew Dacy-Seijo, who was fouled with 0.1 seconds on the clock — not enough time for a UD miracle.

“We’re just one possession off there,” said Spartans coach Robbie Sieverding. Less than a month ago, his team lost another nailbiter to Loras, 88-87, in a game that also came down to the final possession. “We got a great look. ... There’s just a few things we could do a little bit better there in the second half.”

Ragen started the second half with a hook shot and Henry Thompson drained a 3 to give Dubuque its largest lead, 45-33. The Duhawks climbed back on a 17-5 run for a 50-50 tie, and later took their first lead since the first half, 60-59, on a layup by Ford.

Each possession became crucial after that, as the teams traded the lead two more times and played to three more ties in the final 8 minutes. Ragen scored four straight points as part of a six-point spurt for a 65-60 UD lead, but Loras answered with seven straight of its own to take a 67-65 lead in the final 4 minutes.

Ford then emerged with his short scoring run, and that was all the Duhawks needed to keep the lead for good.

“That’s been our identity. Knock on wood, we’ve wound up on the good side more rather than the bad side more often than not,” said Loras coach Chris Martin. “Young men taking things seriously and doing things the right way.”

It was an important game for both teams as the postseason draws closer. Loras is one of two teams to clinch a berth in the six-team A-R-C conference tournament. With two games left, Dubuque finds itself narrowly hanging on to the fifth spot in the standings, but could see itself tumble out of the playoffs if it loses to fellow tournament contenders Coe and Wartburg.

“That’s a great college basketball game and it stinks because we’re a couple plays away from being at the top of the standings,” Sieverding said. “Right now, we’re fighting in the middle here.”

On the other end, the win brings the Duhawks one step closer to their ultimate goal.